Fantastic Beasts: The Crimes of Grindelwald is just around the corner, but fans are already studying the trailers for clues like so many Hermione Grangers with so many copies of Hogwarts: A History. According to the latest fan theory, Nagini, Voldemortâ€™s pet snake isnâ€™t just his resident danger noodle, but his mother. Yes, you read that right. And thatâ€™s just the tip of the creeptacular iceberg. Itâ€™s accio answers on todayâ€™s episode of The Dan Cave.Now, I know what youâ€™re thinking. This sounds like it came straight from the pages of The Quibbler. And thatâ€™s because Xenophilius Lovegood does damn good journalism. This is pure speculation at this point, but given J.K. Rowlingâ€™s love of retconning previously established canon years after the fact, literally anything is possible.

Thatâ€™s right, folks â€” Voldemortâ€™s mom was a total Hisstina Aguilera, according to redditor SoupyCutie. It sounds implausible, but they laid out a not entirely unbelievable case for it. Letâ€™s start with the facts. We know that Voldemort, a.k.a. the wee baby Tom Riddle, was born on December 31, 1926 to Merope Gaunt and Tom Riddle Sr.. In the first Fantastic Beasts film, one can see a poster in the background for the Circus Arcanus, which is set to depart from New York City and make its way to Europe on December 13, 1926. Given that Fantastic Beasts takes place in 1926, many have theorized that weâ€™ll see Voldemortâ€™s birth at some point during the saga.

As we learned in the most recent Fantastic Beasts trailer, Nagini was the â€œsnake girlâ€ in the aforementioned magical circus, and she is known as a Maledictus. According to J.K. Rowling, a Maledictus is the carrier of a blood curse from birth, which only affects women and is passed from mother to daughter. Here the theory invokes a passage from The Half-Blood Prince in which Mrs. Cole, the matron of Woolâ€™s orphanage where Tom Riddle grew up before attending Hogwarts, relates the circumstances of how the wee baby Tom arrived there in the first place.

â€œI remember she said to me, â€˜I hope he looks like his papa,â€™ and I wonâ€™t lie she was right to hope it because she was no beauty â€” and then she told me that he was to be named Tom, for his father, and Marvel, for her father â€” yes, I know, funny name, isnâ€™t it? We wondered whether she came from a circus.â€Â

Mrs. Cole also mentions in that chapter that Merope died shortly after handing over Tom. Now maybe Mrs. Cole is just a rude old gossip, but maybe her comments about Merope Gauntâ€™s looks are because part of a Maledictusâ€™ curse is that they slowly grow more and more to resemble an animal until they are trapped in their bestial form for good. If Merope was already looking increasingly snakelike and worried for her childâ€™s safety, she could have left her child in loving hands, faked her death, and run off with the circus for good. With the Gaunt familyâ€™s connection to Salazar Slytherin, a snake-based curse seems thematically appropriate.

As the theory posits, this would also explain the uncomfortably maternal relationship that Voldemort has with Nagini throughout the books. Not only does Voldemort trust Nagini enough to imbue her with part of his soul and make her a horcrux, but he drinks her venom in order to regain his strength when he is in his gross baby form in The Goblet of Fire.In the book Voldemort explains that â€œWormtail was able to follow the instructions I gave him, which would return me to a rudimentary, weak body of my ownâ€¦with a little help from my dear Nagini.â€Which…just has to be the single worst task to get stuck with, right? Name one thing worse.The parallels there between milking a snake for its venom and a baby drinking motherâ€™s milk are too striking to ignore, and we all know that J.K. Rowling isnâ€™t exactly one for subtlety. The two could communicate through Parseltongue, which would allow them the chance to maintain a familial connection even when Nagini could no longer speak human language. If the two were so closeâ€”as close as a mother and sonâ€”it also could explain why Voldemort felt he could place enough trust in Nagini to make her one of his Horcruxes since he could rest assured that she wouldnâ€™t betray him. This also fits in with Rowlingâ€™s statements about how there were two things in Harry Potter that nearly made her editor vomit when she explained them to her: one was how Horcruxes are made, the other was how Peter Pettigrew brought Voldemort back into his â€œrudimentary body.” 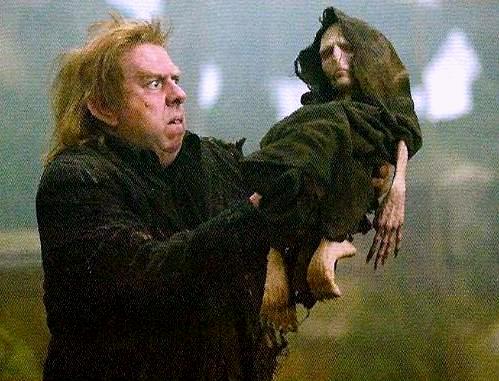 Speaking of that â€œrudimentary body,â€ another redditor named Observa theorizes that the real reason that Voldemort looked like a horrifying snake man in his new body is because he ingested Naginiâ€™s cursed venom-milk. It wouldnâ€™t be Voldyâ€™s first time glurping cursed magical liquids to sustain himself. In his Kuato-like form on Professor Quirrellâ€™s head, he chugged unicorn blood in order to keep himself going, an act which Firenze the centaur revealed in Harry Potter and the Sorcererâ€™s Stone would give you â€œbut a half life, a cursed life, from the moment the blood touches your lips.â€ So what do you grab when youâ€™re fresh out of unicorns? How about the next best thing: magical beast blood from a Maledictus? Itâ€™s like the Sunny D of the Wizarding World.The theory notes that when Voldemort regenerated, he was described in Goblet of Fire as being â€œtall and skeletally thin,â€ with a face â€œwhiter than a skull, with wide, livid scarlet eyes and a nose that was a flat as a snakeâ€™s with slits for nostrils, his hands were like large pale spiders; his long white fingers caressed his own chest, his arms, his face, the red eyes, whose pupils were slits, like a catâ€™s, gleamed still more brightly through the darkness.â€Itâ€™s a chilling description, but it also stands to reason that Voldemortâ€™s weak, new body could have taken on some of the more serpentine features of the source of its strength, emboldened by the dark magics swirling within Naginiâ€™s Maledictus cursed blood.Spooky, right? Still, itâ€™s just speculation at this point. There are a few holes that one could poke in the theory. Some fans online have pointed to actress Claudia Kimâ€™s ethnicity as a potential hole in the theory, but considering how the first Fantastic Beasts revealed Johnny Depp to be masquerading as Colin Farrell for the entirety of the film, it is entirely possible that what Credence sees in the tent is Merope Gaunt utilizing some sort of glamour spell or a Polyjuice Potion to disguise her true identity. This would be more a huge bummer because itâ€™s more than a little icky, and why waste Claudia Kim like that, but then again, I had the same questions during that bafflingly annoying reveal in Fantastic Beasts, so hey.Another thing that could let the wind out of the theoryâ€™s sails are passages from the books that describe Voldemortâ€™s increasingly warped appearance after he left Hogwarts thanks to creating his many, many horcruxes. For example, when Tom Riddle visited Lady Hepzibah in The Half-Blood Prince, his cheeks were hollowed and he was looking quite pale and he has a momentary red gleam in his eyes when he sees Slytherinâ€™s locket. In Chamber of Secrets, Dumbledore remarked that Tom â€œdisappeared after leaving the schoolâ€ and â€œsank so deeply into the Dark Arts, consorted with the very worst of our kind, underwent so many dangerous, magical transformations that when he surfaced as Lord Voldemort, he was barely recognizable.â€ So maybe he was born with it, maybe itâ€™s Maybelline, or maybe itâ€™s just so much dark magic that it gave him one hell of a skin condition. Weâ€™ll just have to wait until Fantastic Beasts: The Crimes of Grindelwald hits theaters on November 16 to find out.But what do you think of this theory? Do you buy that Nagini is secretly Voldemortâ€™s mom? Do you think that Naginiâ€™s venom led to Voldemortâ€™s gross old face? Let me know in the comments below.