Ever since her first appearance in Batman: The Animated Series, Harley Quinn has carved a black and red path of cuteness and chaos that’s led to her becoming the “Fourth Pillar” of DC Comics alongside Superman, Batman, and Wonder Woman. That title’s pretty fitting since the latest issue of Harley Quinn’s ongoing title sees Harleen teaming up with Granny Goodness and the Furies, smashing her mallet into Jack Kirby’s iconic Fourth World. I chatted with new writer Sam Humphries about breaking the Fourth World, writing an icon, and bringing Harley back to the center of the DCU. Humphries is following what could easily be argued as the definitive Harley Quinn run, so he was surprised by the massive positive reaction to his announcement. “I didn’t think the response was going to be so lovely and gratifying,” he said. “My first thought was about the long shadow cast by Amanda Conner and Jimmy Palmiotti’s all-star run. Five years is an amazing accomplishment! And then I thought about writing Bugs Bunny vs. The Legion of Superheroes—maybe the most fun I’ve ever had in my career. Harley Quinn is kind of like the Bugs Bunny of the DCU. She can go anywhere and meet anyone and always be herself. And just by being who she is, we see the rest of the DCU in a new light.” 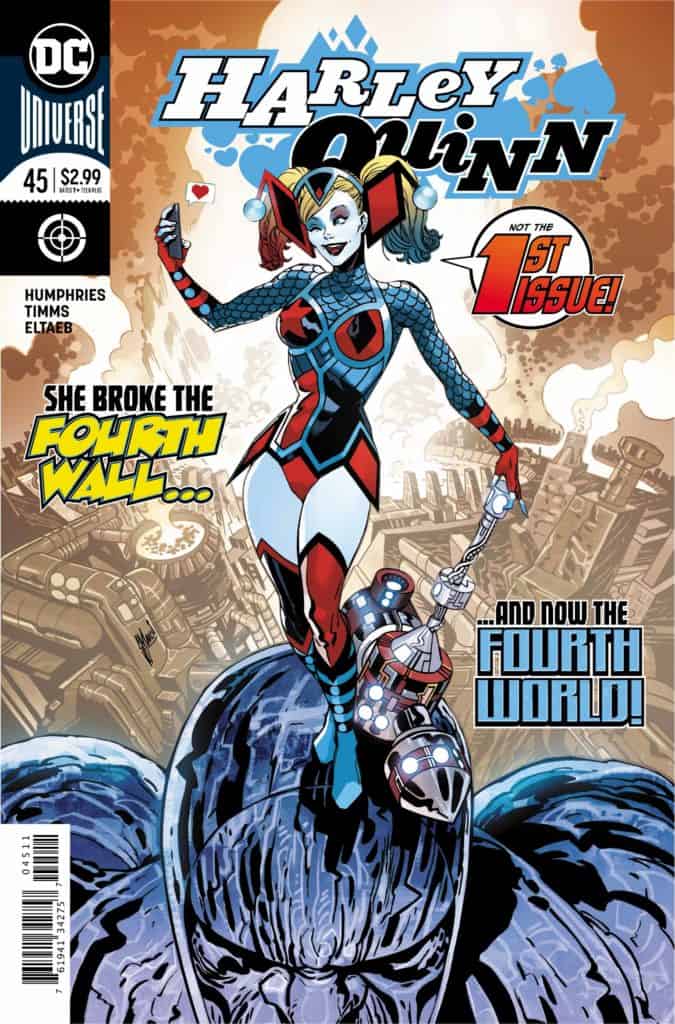 As Harley is one of the most popular characters in the world of DC’s comic books, cartoons, and films, Humphries aimed to make sure that his arc would bring her back to the forefront of the DC Comics Universe. “Bringing Harley back to the core of the DCU is one of our very first goals with the run,” he said. “Another goal was to refocus the book on Harley as a character. She’s got a LOT of personality, but there’s a lot of emotion running through Harley too. She’s a survivor. Tough exterior, vulnerable core. There’s a contrast and a depth there that, if you do it right, you’ve got more than enough story for a year, two years—if I’m lucky, five years.”

Humphries’ collaborators on the new Harley Quinn book are John Timms, Gabe Eltaeb, and Dave Sharpe, who do a fantastic job of creating the iconic visual landscape of Apokolips. “Haven’t they done an amazing job?” Humphries said. “Now that the first issue has dropped, everyone knows what a dangerous duo [Timms and Eltaeb] are. It’s been so gratifying seeing so much love for the amazing work they’ve done. They’ve mastered the mayhem of Harley, the bombastic-ness of the Fourth World, and the emotions of Harleen. Not an easy trick. Wait until you see issue 46…!” 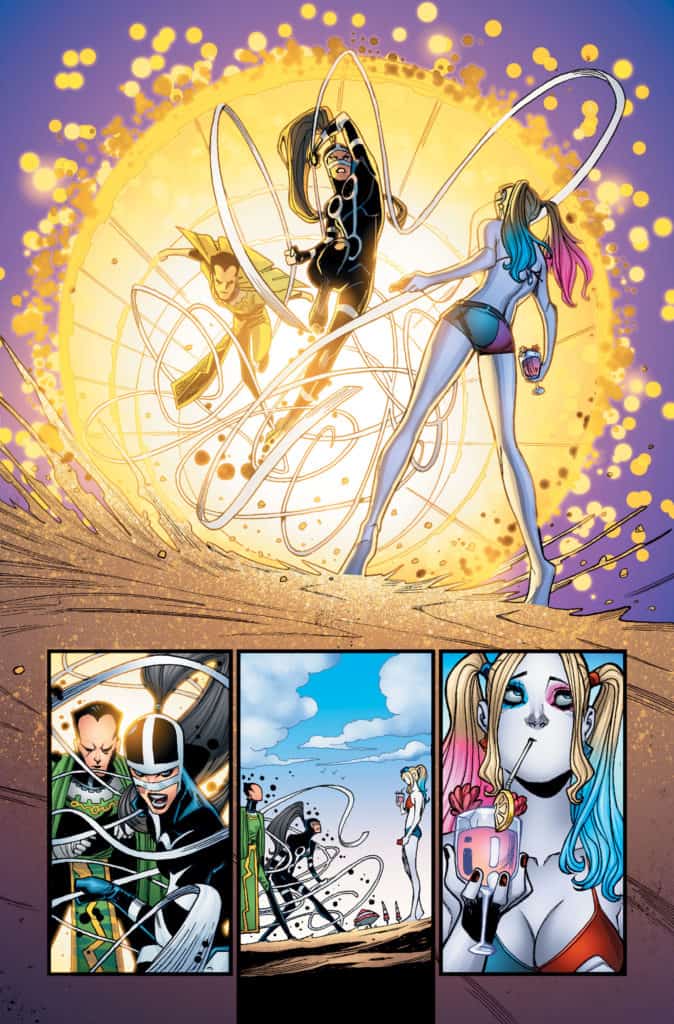 I wondered about the weight of responsibility of entering the vibrant and unique universe of Jack Kirby’s Fourth World. “It would have been easy for me to be afraid,” Humphries said. “I love Jack Kirby, and the Fourth World, so much. These characters are so meaningful to me; they reach down to the core of why I love comics. The characters of the Fourth World are strong, so you can use them in different books with different tones. They will bend, not break. And in the process, you can learn new things about legendary, beloved characters.”

Humphries continued, “This was proven years ago when Mister Miracle and Big Barda were two of the best parts of Justice League International. Kirby led by example, and he didn’t make a habit of creating from a place of fear. So with those inspirations in mind, I went in big and bold, and focused on working as authentically as possible.”

Now that the first issue is out in the world, Humphries is looking forward to the next big milestone. “Our big anniversary issue #50 is gonna be wild,” he said. “A nearly double-sized art jam issue, in which Harley Quinn destroys DC continuity. That’s right, continuity gets smashed to pieces. It is absolutely unlike any comic you’ve ever seen before. And the key to saving the day lies in one of the most elusive comic creators of all time, the mysterious M. Clatterbuck.” 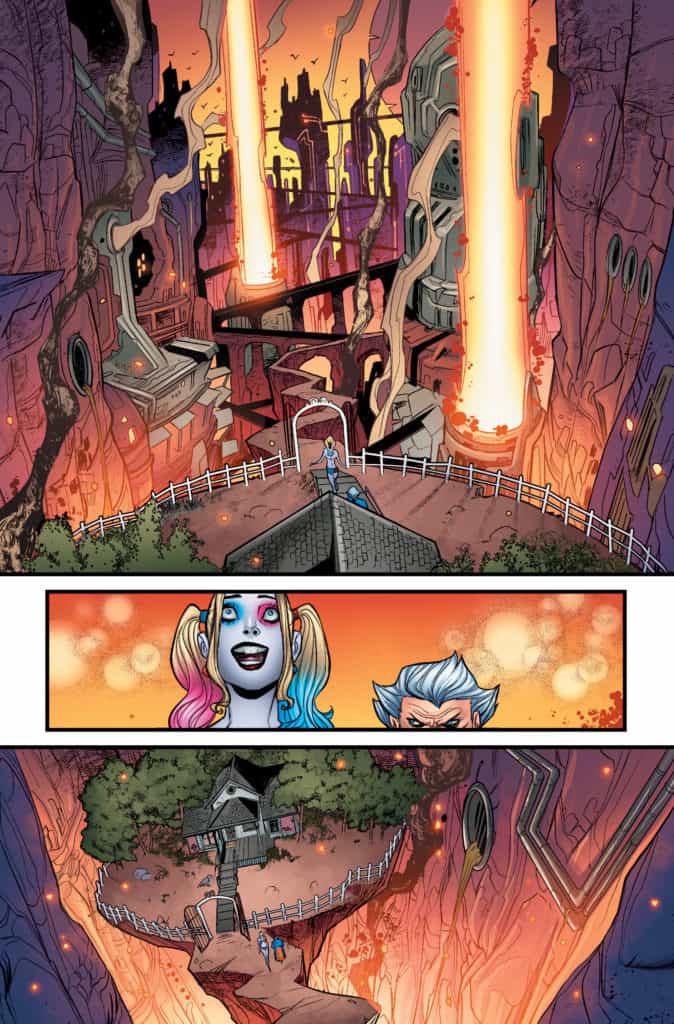 Humphries is clearly overjoyed with the response to the book, as he had a message for fans. “I just wanna say to everyone reading this, I am writing these answers only five days after the first issue came out—and THANK YOU. Either online or at the stores, the love from the fans has been overwhelming, and inspiring. We’re working our asses off to return that love tenfold in future issues of Harley.”