If 2015â€™s Goosebumps aimed to connect with more than just the generations of kids raised on R.L. Stineâ€™s enormously popular book series, Goosebumps 2: Haunted Halloween seems to narrow the scope of its appeal to target fans of that previous film, and their younger siblings. Thatâ€™s not at all a bad thingâ€”kids need scary, or â€œscary,â€ stories of their own, and Ari Sandelâ€™s follow-up delivers plenty of startling surprises for family-friendly audiences. But the fact that Haunted Halloween is peculiarly disinterested in the events of the first Goosebumps film – except as a Google search result – makes it a fascinating curio as the franchise evolves, since its predecessor introduced the author as a character within its world, offering virtually limitless opportunities for creative crossovers even if the real Stine didnâ€™t have literal volumes of great material for filmmakers to adapt.Jeremy Ray Taylor (It: Chapter One) plays Sonny, a Nikola Tesla-obsessed nerd who reluctantly joins his pal Sam (Caleel Harris, Think Like A Man Too) for a business venture hauling away junk for the adults in their neighborhood. While digging though the remnants of an abandoned house, they discover a hidden room containing a manuscript by R.L. Stine ( Jack Black, The House With A Clock In Its Walls) entitled â€œHaunted Halloween.â€ Unlocking the manuscript releases Slappy (Black again), a ventriloquistâ€™s dummy with magical powers who announces plans to join Sonnyâ€™s family whether or not they want him to be a part of it.When Slappy proves too mischievous for the two of them, Sonny and Sam enlist his sister Sarah (Madison Iseman, Jumanji: Welcome to the Jungle) to rid themselves of the supernatural pest. But what happens instead is Slappy creates an army of minions made out of Halloween decorations to enact his fiendish plan, and they are forced to figure out a way to return the town to normal and return their diminutive foe to his prison inside Stineâ€™s manuscript – if they can survive the onslaught of evil creatures Slappy has unleashed. 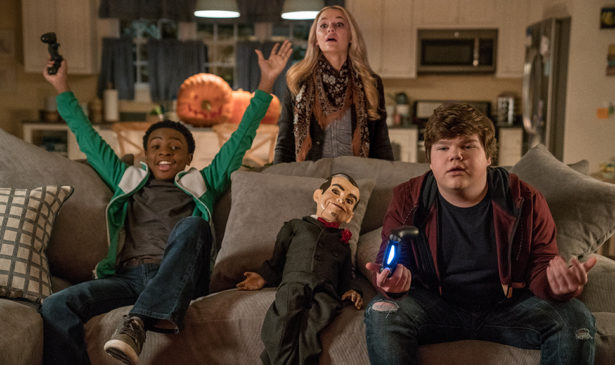 In a 2018 landscape littered with horror films from Hereditary to Halloween, Goosebumps 2â€™s scares are decidedly pint-sized – a poppy, all-ages tone enhanced by music thatâ€™s more Danny Elfman (who did the score for the first film, but not the second) than Bernard Herrmann. Still, they seemed to work on the kids in the audience when I saw the film, especially since Sandel keeps proceedings moving so quickly that even a quick turn of Slappyâ€™s head can register as a surprise. But what’s less clear than how scary Slappy can be is exactly how much weâ€™re meant to identify or sympathize with his motives, given that he supposedly â€œjust wants a family of his ownâ€ after we saw him put Stine and the cast of the first film through their paces for no other reason than heâ€™s a supernatural being who likes to cause trouble.Even without being well-versed in Stineâ€™s work, it feels like there are dozens of great creatures or concepts ready to be explored and expanded on the big screen. Other than his skeleton-key powers to manipulate people and objects at will and seemingly without rules, why Slappy again? And why not include the fictional Stine more? Black shows up only for a few short scenes, and more or less immediately acknowledges that these new kids have the situation well in hand. But in spite of that, the movie inexplicably repeats several key ideas from the previous one – including the premise that completing the unfinished story that set these events in motion will resolve them. And weirdly, it does so without any prior cast members other than Black, making this expanding mythology feel like a series of footnotes rather than new chapters.At the same time, thereâ€™s a fascinating thread in this film about taking responsibility, both for yourself and for others, that it doesnâ€™t tread too heavily upon but nevertheless leaves as an afterthought to Slappyâ€™s Halloween-themed shenanigans. (Mind you, the events of the film feel like good examples where these hapless kids are not at fault for whatâ€™s going on, but itâ€™s still a worthy note to end on, even if itâ€™s more likely to be absorbed by adult chaperones than the kids theyâ€™re bringing to the theater.) Ultimately, Goosebumps 2: Haunted Halloween is an energetic lark, a thrill ride that feels likely to entertain its target audience – but is it truly worthy of the authorâ€™s expansive bibliography, or merely a successful spin-off? Given the way the movie ends, the filmmakers seem confident that it will keep viewers coming back for more; but the one thing these films are determined to reiterate is that it can be really tough to predict how a story will end, especially when Stine isnâ€™t involved enough.