GMs: How To Use Digitally-Created DUNGEONFOG Maps in Engaging Ways - Nerdist

Since dabbling in the world of using maps for my games when I was younger, I have often opted to not using them just due to time constraints. Now, there are so many ways to make life easier and I’ve since been blessed with using DUNGEONFOG. During this transition, I’ve been thinking about some ways to really use this tool to help you engage with your players.

This is kind of dream that I and many others have for a more immersive element. Being able to move your miniatures on an actually displayed map that changes, reacts, and opens up as you go. If you’ve imported your maps through DUNGEONFOG into Roll20, Fantasy Grounds, d20pro or other online services then it gets even easier, but if you haven’t, it is still an exceptionally functional map. I can only imagine what the future holds for us all when tables react to miniatures being placed in certain areas and more before we hit the levels of VR integration. 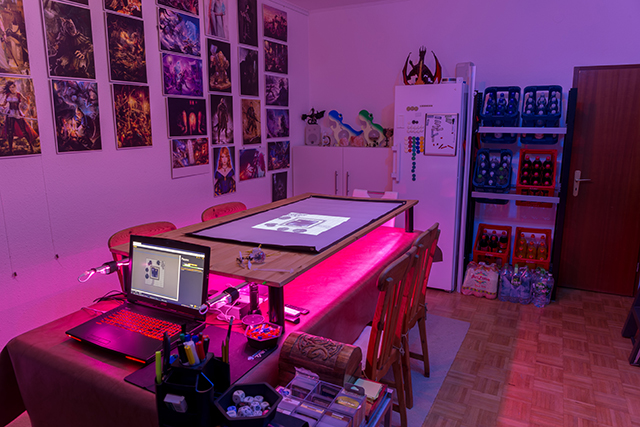 This particular set up is also pretty neat from a construction standpoint. It’s simple yet elegant and has non-obtrusive lighting under the table to allow players and the GM to see their possessions without obscuring the ambiance of the game. These kinds of strides forward are absolutely within reach these days. As projectors and monitors get cheaper, it’s just a matter of taking the time to build such things for yourself or finding those services that have been able to make things more affordable for the same reasons.

Even if you don’t have a built-in projector or surface to game with, you can hook up a TV or monitor for your players to look and you can display the map for them to reference during your game. You can also pass around a tablet with the map for them to reference as you play – it doesn’t have to be as fancy a set up as this, and can be simple to do.

Time can always be the enemy of doing cool things. Thankfully, because you can clone other maps on DungeonFog and take full advantage of the sharing in the community you’ll be able to find something close enough or just right for what you’re looking for. In this particular case, I cloned a large apocalypse-style map from @BGSimplified on DUNGEONFOG.

I created an email address just for my players to get correspondence throughout the game. I’ve always done something similar with player folders that allowed me to work in unique narrative opportunities for players, but this was a step forward. As the game goes on, they get emails in the forms of assignments, threats, and so forth from these various fake emails posed as characters or otherwise. In this initial setup, they were sent the following map:

The idea was that this group of players was being dropped in to investigate the happenings in the town and rescue some of the survivors if able.

From that minor detail, I was able to start building more story elements in my head based on player stories and motivations. While everyone had a common goal, players ended up with individual secondary and tertiary goals to complete.

Distributing maps digitally works well for modern conspiracy-style games, or science-fiction universe set games. The maps don’t have to be complete, nor do they have to be accurate – for the players, figuring out how much is accurate or determining if the map can be trusted is a great opportunity to insert plot and roleplaying opportunities.

While the above is focused on hooking players, it should be noted that it was done through the way of props. The above works really well for a modern, sci-fi, or similar context where technology is available. What happens when you’re playing fantasy games? I’ve seen it time and time again, but you can print out your props and really go to town on aging them. Mark them up, make them feel old, and bury secrets in the text.  All of this can be done to really give your players that tactile feel.

You can easily take a map you’ve created, print it on some paper and use that as a prop to improve immersion, making your map an artifact of the campaign. To craft a map like this one, just make your map in DUNGEONFOG (it takes minutes), and export it. You can then simply tint some paper using some watered-down paint (you can use old tea or coffee), and printed the map in black and white onto the paper. You can even take your map to a flame and (carefully) singe the edges to give it a worn look. 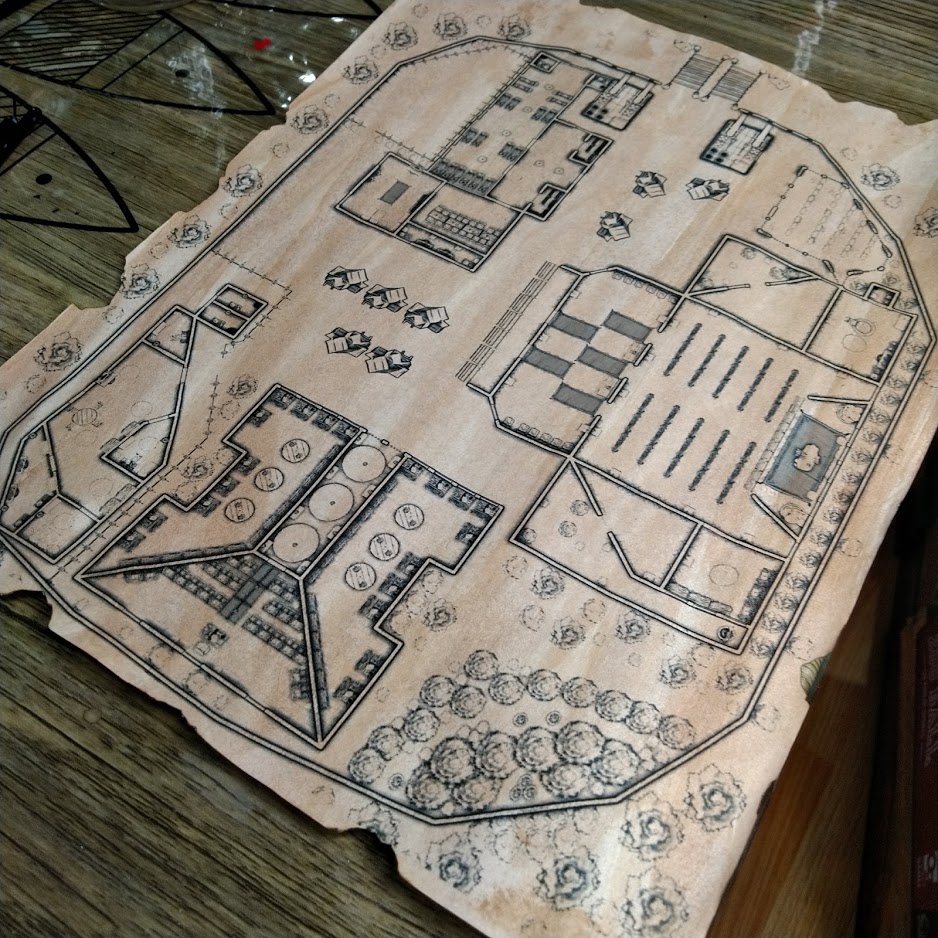 Again, the information on this kind of map doesn’t have to be correct or exact: you can create a dungeon map an adventure peddler might be selling maps to treasures, it could be information squirreled away by clandestine agents, or it could be a relic passed down from a family member. Either way, a map such as this can be a fantastic catalyst for an adventure.

One of my favorite games I ever got to play in did something similar. The GM, a guy named Maxx, would print out our objectives for the game. It was always nice, crisp, and clean. Then one day, we received a bunch of ripped up shreds of paper. We had to reassemble the briefing and figure out exactly what it was that we needed to do for the game. It was amazing. The end of the sessions made everyone feel like they had really accomplished something and it was all because of that little nod to physical props.

If you really want to get fancy, you can export your created map for large-format printing and use cutouts to display it as a table, but even if you simplify it, these maps can be used by GMs who prefer mind’s eye gaming while still creating an immersive prop for your adventure.

With DUNGEONFOG, don’t let time stop you from making neat things for yourself or your players. I know I haven’t had as much time to make neat things for my players and we’re switching over to virtual tabletop mediums given a recent move, but I seriously cannot say how excited I am to use this tool. It gives you everything you need and they’re making updates to add new things, create new features, and tune it up all the time.

Creating custom RPG maps has never been easier. DUNGEONFOG lets you focus on your story while creating marvelous maps for your adventures. Check it out for free on www.dungeonfog.com/geek-and-sundry or use the promo code GEEKANDSUNDRY to get 10% discount on your first annual premium subscription!