Things here on terra firma may be a bit absurd right now—thanks to an ever-lengthening list of unbelievable current events—but it seems that everything going on in the deep sea is the same as it ever was: Meaning it’s still basically a stand-in for a freaky underwater-forest planet rife with bizarre alien-like entities. Like the gigantic siphonophore in the below video, which is made up of a massive colony of individual organisms, is likely hundreds of feet long, and could be hundreds of years old.

Gizmodo picked up on the viral video, which was recently posted to Twitter by the Schmidt Ocean Institute, a nonprofit that’s been established to advance oceanographic research. (If the name sounds familiar, that may be because its founders are former Google CEO, Eric Schmidt, and his wife, Wendy Schmidt.) The video was recorded somewhere near the Ningaloo canyons, which is off the western coast of Australia. 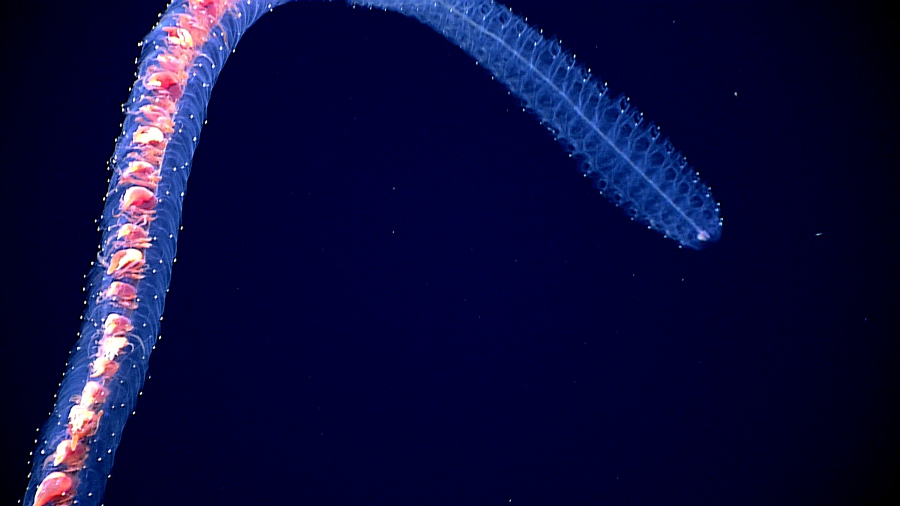 A close-up look at another siphonophore, which was observed by the NOAA. NOAA

According to Schmidt Ocean, the creature in the clip belongs to the species, siphonophore Apolemia, which is a member of the order, Siphonophorae. The 175 species of siphonophores that make up Siphonophorae are each, in actuality, made up of an enormous colony of “zooids,” which themselves are individual animals. These zooids, or “drones,” as they’re sometimes called, work together as a massive team to keep any given siphonophore alive and moving. And while all of a siphonophore’s zooids share identical DNA, they still mutate to perform very different functions. For example, in the below tweet from Assistant Professor at University of North Carolina Asheville Rebecca R Helm, we see an unrelated siphonophore’s zooids working together to digest prey.

...once a clone captures its prey (a fish or crustacean) it will reel it to the colony & other clones that work as mouths will surround it. Often many swallowing it at once. Here is a video I took of another siphonophore, a man-o-war, eating prey. Once they prey is digested... pic.twitter.com/IIdS2w9263

Helm, who assembled an entire, in-depth Twitter thread outlining why this particular siphonophore is so extraordinary, says she’s never seen one anywhere near this long before. For reference, Helm says that most of the siphonophore colonies she’s seen have ranged in length from 20 centimeters to, maybe, a meter (about 3.3 feet). The one in the video from Schmidt Ocean is roughly 154 feet long—and that’s only the length of its most-outer ring of body.

Most frequent question so far: "How big is it?" we don't have exact size, but the #ROV pilot used #SuBastian and its lasers to estimate the size: this siphonophore’s outer ring measured in at 15m (49ft) diameter, so just that ring *alone* seems to be approximately 47m (154ft)!

Moving forward, it seems that Schmidt Ocean’s expedition aimed at exploring the Ningaloo canyons will continue, despite any complications arising from the worldwide pandemic. In fact, Schmidt Ocean has already delivered more footage of other otherworldly creatures it’s discovered, and yes, they look like they could easily pass as aliens too.

What do you think about this unbelievably long marine creature? Are you fascinated by the fact that it’s made up of tons of little drones all working together to keep it alive, or does that little biological quirk just give you the willies? Assemble a colony of your opinions in the comments, people!