Get Mysterious with Illimat - Nerdist

A few weeks back while traveling through Portland, Oregon, I got a chance to sit down with the folks at Twogether Studios and play a few hands of Illimat. I’ve been a longtime fan of creator Keith Baker, so I was super happy to sit down with him and partner/wife, Jennifer, to see what the game was all about. 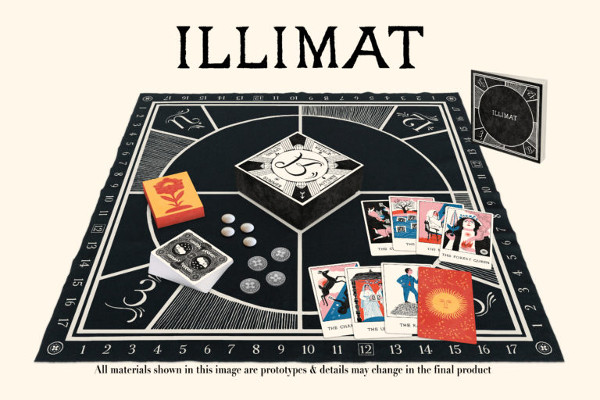 The game is simple, far more simple than it appears when you first watch it being played, which is by design. It’s meant to look and feel like a game a secret society might play and thus some of the trappings we expect from modern games (like additional instructions printed directly on specific cards) are ditched in favor of that old-world, mysterious feel. If you get a chance to play Illimat in formal clothes while seated around a table in a mahogany paneled room, I highly recommend it.

The board is split into four sections called “fields.” The box sits in the middle of the board and is a game piece in and of itself. This is the titular “Illimat” and it applies special rules to various fields. In each field, you place an amount of face up cards. These are like standard playing cards, but there are five custom suits. The cards range from 2 to 10 with face cards for 11, 12, 13 and 14. Players have a hand of these cards from which they take their actions every turn. 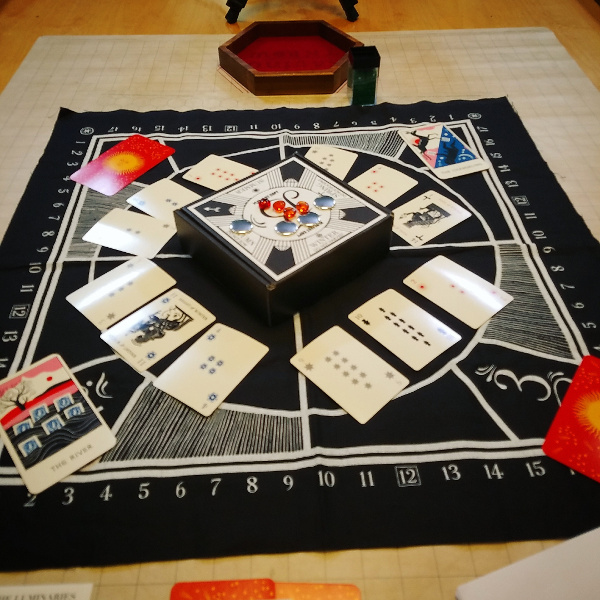 On each turn, a player can take one of three actions. In each case, they use one card from their hand and apply it to one field on the board.

One option is to “Sow” a card, which means you take a card from your hand and place it in a field. This is the least useful action and mostly happens when you can’t take either of the others. You can “Stockpile” which is taking a card and placing it on a specific card in a field to join their values together. So you could Stockpile a 2 onto a 4 and make that a six. Once they are joined together, they can’t be separated or targeted separately. Finally, you can “Harvest.” When you Harvest, you show a card from your hand and then take all the cards in a given field that can add together to equal that value. So with a 7, you could take a 5 and a 2, a 3 and a 4, or a 7 by itself. If you can make the total number several ways, you can take all those cards. So if a field had a 7 or even two 7s and a 2 and a 5, you could take all those cards because in various ways they add up to the card you showed. All these cards go into your Harvest pile.

The final two components of the game are “Luminaries” and the Illimat itself. The Illimat has four sides, each representing one of the four seasons, which line up to the fields. The seasons prevent you from taking certain actions in a that field. You can’t harvest in winter or stockpile in spring for example. Every time you place a face card during any action, you can change the position of the Illimat and thus the seasons of the fields, changing the dynamics of the game. It’s a good play to make it winter where you think an opponent might have a big harvest prepared.

The Luminaries are large format, tarot-like cards; one each is dealt face down into each field. The first time you clear a field, you turn its Luminary face up. Each Luminary has a specific game effect while they are revealed. For example “The Forest Queen” locks the Illimat with summer facing her field. The second time you clear that field, the Luminary itself is taken and is worth an additional point. Some Luminaries also have effects when they are claimed, such as “The River” which protects the player who takes it from losing points for having the most winter cards.

With elements reminiscent of classic trick-taking card games and more modern table top board control games, Illimat is both deceptively simple and surprisingly complex. Keith and Jen sent me home with a demo version of the game and I’ve played it now with a half-dozen groups of friends. In each case I learned a little more about the nuances of play. There’s never a dull moment, and the game pairs well with a nice sherry and a cigar if that’s your thing. It also pairs with a soda while you play it on the back of a suitcase as your wait for a flight. That doesn’t suck either.

Have you funded Illimat on Kickstarter? Does having a “secret society” feel add anything to the games mystique? Can you believe I went the whole article without mentioning The Decemberists?