Get Better With SuperBetter the Video Game That Heals - Nerdist

Get Better With SuperBetter the Video Game That Heals

Jane McGonigal is not you average game designer. She is the Director of Games Research & Development at the Institute for the Future, a non-profit group that is researching how games change our lives. She uses her PhD in performance studies and her knowledge of game design to create alternate reality games. Her most recent and perhaps most compelling project is SuperBetter. 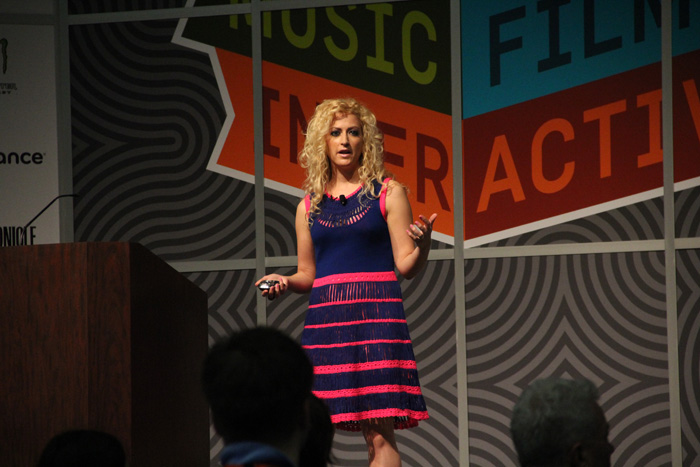 SuperBetter is a free app that Jane designed after dealing with a traumatic brain injury. The chronic pain she experienced left her depressed and suicidal, but instead of letting those feelings drown her, Jane put her brain to work creating something that would heal her as she played it. The game presents you with bite-sized quests designed to get you to do things that will slowly build up essential traits to a healthy mind and body.

I downloaded the app and tried it out for a week. Anxiety is a major issue for me and I was curious what the app would ask of me and how it would affect me. 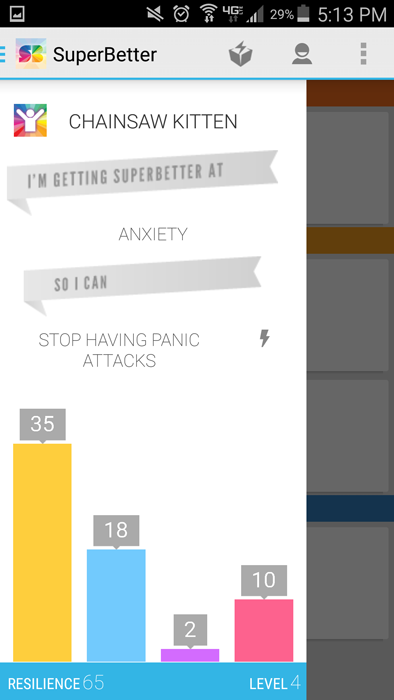 I was shocked at how simple the quests were. With an app that claims to help with all sorts of emotional, physical, and social issues, I expected to be challenged to write long diary entries or go mountain climbing. The quests in SuperBetter are deceptively simple. One of my first quests was “Discover your secret identity. To complete it you need to come up with an alter-ego version of yourself and name it.” I chose Chainsaw Kitten because she sounds like a badass who wouldn’t let things get to her. It allowed me to picture myself in a better able to deal with the world around me.

The app also includes things called Power-ups. If you thought the quests were easy, Power-Ups are like bonus mini-quests. Today SuperBetter challenged me to “Drink a glass of water.” That’s it. I thought I had this nailed, but when I really sat down and thought about it, I realized I hadn’t really had anything to drink in a while. Had I been neglecting myself? I tend to do that a lot when I get depressed or in work mode. Perhaps drinking a glass of water sounds like something everyone would do without thinking, but sometimes you need a reminder to take care of yourself.

That seems to be the main focus of SuperBetter: Self Care. The app asks you to do straightforward tasks such as remembering to eat, moving periodically, and focusing on things that make you happy for a period of time. As you complete each quest, you gain points in one of three stats: Emotional, Social, and Physical Resilience. 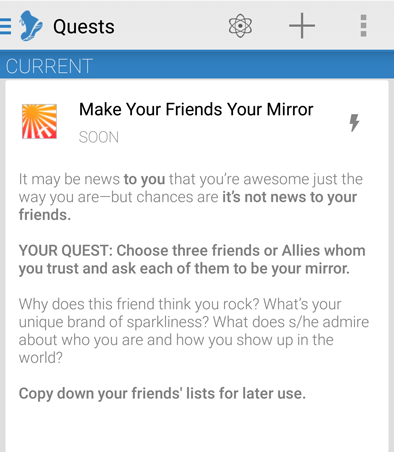 There are more complicated quests when you get higher level, but they still seem feasible and Jane describes her tasks in a easy to relate to way. One of the higher level quests starts: “Be kind to yourself is the first element of compassion. We know this concept can be an eye roller – Just try it out. It’s an awesome way to give yourself the love and attention you seek from others… Picture a person or experience you know you love for sure. Now beam that same quality love at yourself.”

The last aspect of the game are the Bad Guys. These are the enemies you have to fight. Just like the quests and power-ups, these bad guys are little things that you might not realize you are doing that could harm you. 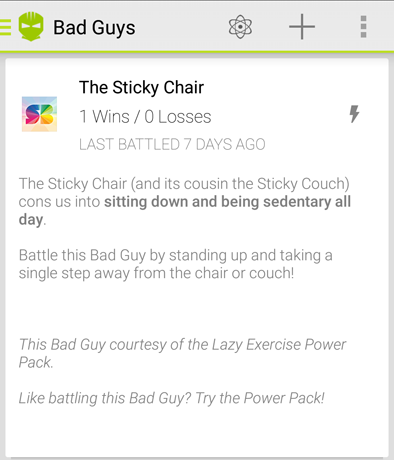 The app really reminded me a lot of the chapter in Chris Hardwick’s The Nerdist Way, where Chris encourages people to create a character tome and to assign themselves things they want to accomplish as quests. The movement to use gamification to change the way we think about psychology is very exciting. Stanford University has been doing research on how playing video games stimulates the areas of your brain associated with motivation and goal-orientation while relieving feelings of depression. If you are curious about the science you can read about the study here.

While I don’t think SuperBetter is going to solve all of my problems overnight or even over a week, it does call attention to some bad habits I sometimes engage in. By acknowledging that I do them, I am better prepared to avoid them and do things that are more likely to make me happier.

What do you think? What kind challenges would you try to overcome with SuperBetter? Are there any other “self-care games” that you like? Let us know in the comments below!