Game Recommendations For Family Game Night – Something To Please Everyone - Nerdist

Game Recommendations For Family Game Night – Something To Please Everyone

Games don’t discriminate. HABA, the preeminent German publisher of kid’s games, print bright yellow boxes that clearly display “for ages 4-99”. Yet, certain games are more appropriate or more likely to succeed in different circumstances. You’re not going to sit your six-year-old down and watch Get Out, and you’re also not going to subject them to three hours of trading spice in the Mediterranean – unless perhaps you’re punishing them for not cleaning up their room.

So let’s talk about it. Let’s break down some choice titles and appropriate recommendations for each corner of your home. No more trips to the Molasses Swamp or pushing little blue and pink pegs into a chunk of plastic that resembles a station wagon. Not today. Today we roll dice, throw high fives, and most importantly, laugh.

There’s nothing more enjoyable than sharing what you love with your children, grandchildren, or even nieces and nephews. This is an easy sell because kids love games. So how about we find us some quality games that both you and them will enjoy? 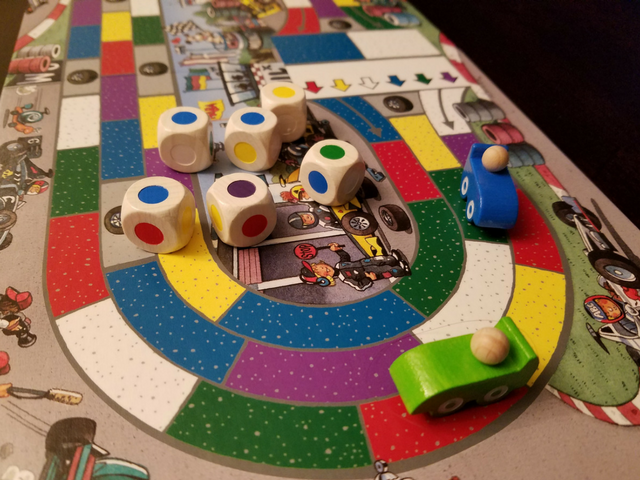 Monza is one of the best. This HABA title features two things kids love – race cars and fistfuls of dice. It’s a simple design where players roll six dice on their turn and then spend the dice to move into spaces directly in front of their race car. The structure encourages tactical thinking as spending the dice in a certain order may yield better results. It’s full of those juicy moments where the little one throws down a pile of chance cubes and then furrows their brow as they try to work out the tiny puzzle. When they cross the finish line they’ll be talking trash and dancing in their chair (at least that’s what my daughter does).

Bugs in the Kitchen may not have the clean family fun of Monza, but it sure has table presence. Best described as ‘hilariously icky’, this oddball is a Ravensburger release that features a vibrating hexbug wildly traversing a maze. Players roll a die which determines which type of utensil wall section they can rotate on the board (spoon, knife, or fork of course), and the goal is to create openings in the barriers to funnel the bug into your little scoring nook. This teaches children to plan routes and visualize the solution before implementing it. It’s also just downright fun watching this jittery bug bounce around every which way.

For Your Significant Other

There’s something extraordinary about playing a two player game with your special someone. After you’ve played 800 games of Monza and put the children to bed, you can break out something a little more sophisticated and elaborate. 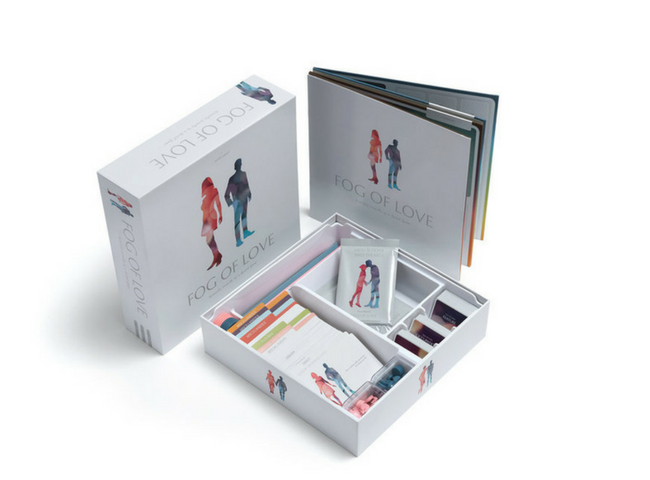 Sophisticated and elaborate is an appropriate description for Fog of Love. This unique entry is published by Hush Hush Productions, and in an odd turn of events is available exclusively from Wal-Mart online. Nevertheless, this is one of those games which approaches a level of realization that can only be described as art. Yeah, from Wal-Mart.

This is a relationship simulator that has you go through an RPG-like character building phase before tossing the odd couple together. You’ll receive careers, personality traits, and this fictional couple will blossom or crash horribly right before your eyes.

It’s played over a series of scenes as you pursue personal goals by making decisions framed around sometimes romantic and sometimes awkward situations. Play evolves as you open small booster packs included in the box that present new scenarios and unique challenges, providing an arc of play that is tantalizing and refined. It’s the type of game that is unlike anything you’ve ever seen and will occasionally present moments of emotional clarity that can deepen a couples’ relationship. That’s pretty special. 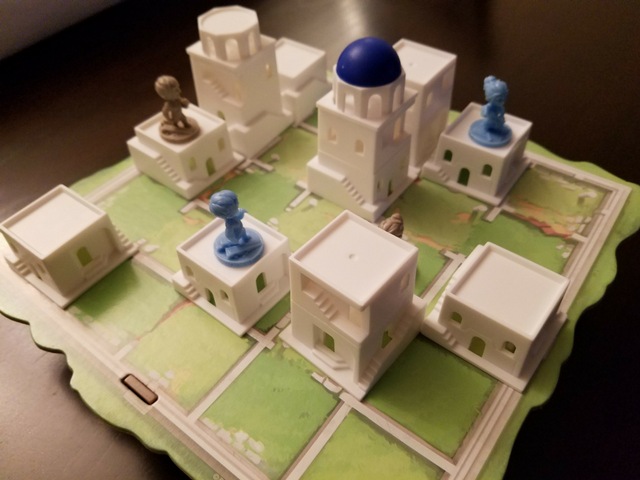 Santorini may not lead you to moments of profundity, but it will lead you to moments of exhilaration and fist pumping. Best described as an abstract game for those who dislike abstracts, each player controls two plastic builders and takes turns moving one to an adjacent space. When doing so they construct a 3D structure in an adjacent space. These building sections stack atop each other, eventually forming a capped dome at the top. If you can move your builder to the third level then you win. It’s dead simple, yet it’s full of gripping tension.

This is an easy one to recommend because it lasts a mere 15 minutes, presents a beautiful vertical depiction of a growing metropolis, and really nails engaging play that unfolds in depth over the long haul. It’s the perfect game for a couple that does not mind a little bit of competition and is much more satisfying than the typical fare such as Chess or Checkers.

Look, we all need a little alone time. We love our families but we also love peace, quiet, and a good tabletop game. This solace can be achieved by biting into a solo design and running through the gamut of cognitive challenge and wonderful narrative. 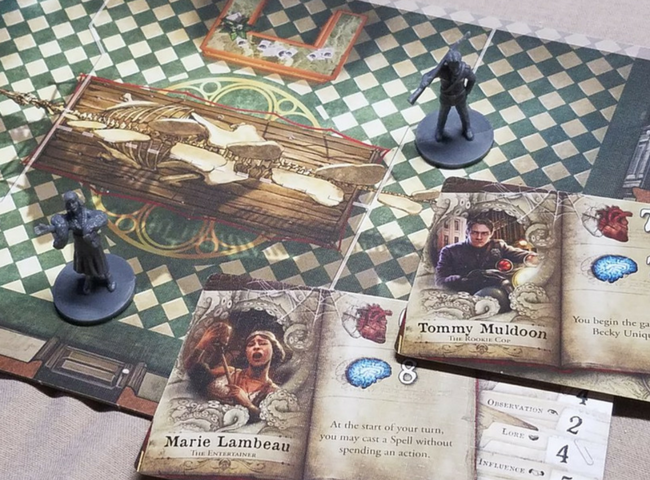 Mansions of Madness 2nd Edition is a damn fine game. You can pull out your tablet, setup a cardboard room tile, and stumble your way through a haunted manor full of Lovecraftian horrors waiting around every corner. With all the bling of a dungeon crawler and tension of a horror game, this one’s a clear-cut winner.

The beauty of this design is the exploration of the unknown. You work your way through the interiors of Arkham’s most eidolic locales, confronting monsters and solving puzzles. The heavy lifting is performed by the companion app, handling monster activation and presenting needed clues and narrative snippets. It feels as though you’re working your way through a choose-your-own adventure with beautiful pieces and tactical nuance. 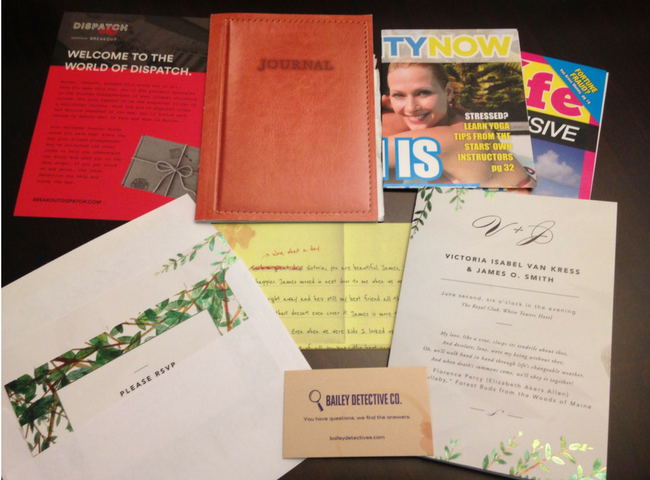 What about something else? Something totally different than anything you’ve experienced before. What I’m talking about is Dispatch. This is an interactive murder mystery experience that is delivered via subscription box. You signup at the website, and each month a new little cardboard treasure trove of mystery lands upon your stoop.

The idea here is to piece together a narrative and research the ongoing mystery. The elaborate story unfolds over many months as you fall into a rabbit hole of depravity and murder. As an experience, Dispatch is unrivaled in its commanding use of physical props coupled with online detective work. You will handle weird items and physically puzzle over strange markings, you will head to equally strange websites of hidden information and alluring detail. It’s engrossing as it presents an adventure in ways you’ve never seen.

Have you played any of these games? Let us know in the comments! Don’t forget to check out into our tabletop show Game the Game hosted by Becca Scott as we play games and talk about what’s happening in the land of tabletop gaming every week here on Geek & Sundry.

Editor’s note: Copies of Fog of Love, Mansions of Madness 2nd edition, and Dispatch were provided by the publisher.