So this is what the end looks like. Flame, ash, death. There was so much happening in the penultimate episode of Game of Thrones that it will probably take several days for every aspect to sink in. But in the aftermath of that brutal, divisive episode, we can think only of this: How amazing that final moment between the Hound and Arya was. After seasons of duality, watching Sandor Clegane prevent Arya Stark from an unnecessary death was truly one of the show’s crowning moments. That’s why the Hound is this episode’s MVP.

Sandor Clegane has been one of the show’s most polarizing characters since his introduction in the pilot. A large, intimidating force, he once served the show’s ultimate evil, Joffrey. In the name of that boy king, he performed hideous deeds; he killed, he tortured, he delighted in evil. But he also fled King’s Landing before Joffrey’s fall, and took solace in the company of Arya Stark when they encountered each other on the road. The two forged a companionship, and the Hound watched Arya grow up, and saw the early signs of her transformation into assassin. They were both vengeance-bent; Sandor wanted to kill his evil brother, Gregor (“The Mountain”), and Arya wanted to wreak havoc on the Freys, the family who killed her mother and brother in the Red Wedding.

Arya left Sandor to die back in season four. After his duel with Brienne, he was broken and bloody, as good as dead on the side of a cliff. He begged Arya to kill him, but instead of relenting, she walked away, preferring to let him bleed out and die without her hand in the matter. But he lived, and the two reunited this season – both changed from incidents past. Both them even more broken than before. 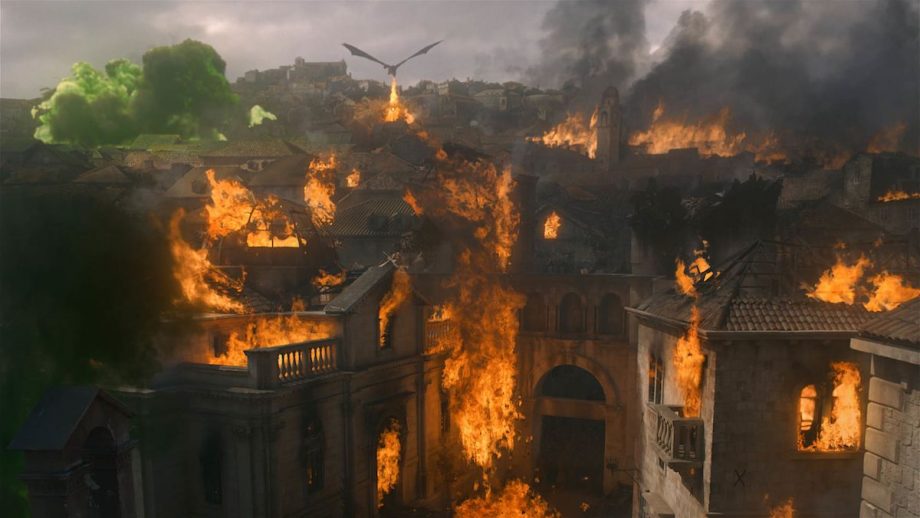 In the previous episode of this eighth and final season, “The Last of the Starks,” the two reconvened in Winterfell, and bonded over their mutual departure from the Northern kingdom and their descent upon the capitol. The Hound said he was leaving, never to return again; Arya said the same. We thought for a moment that these two broken souls were about to find completion. That the Hound was going to kill the brother who made his childhood Hell, and that Arya was going to kill the No. 1 person on her kill list: Cersei.

The two arrived together at King’s Landing, but after Daenerys finally went mad and burned the city, they had a moment. In this time, the Hound cemented his MVP status by preventing Arya from “becoming like him” and killing Cersei at the expense of her own life. “You come with me, you die here,” Sandor tells her.

“Sandor… thank you,” Arya says, rediscovering her own desire to live. She goes on to her own bloody path of survival in the carnage of King’s Landing, while the Hound faces his brother in a duel that ends with both of them dying; but that has no shortage of laughs or well-earned moments. We’ve all known forever that the Hound and the Mountain would meet again in combat. Their final moments, as King’s Landing burned, were great payoff.

We don’t know where things go from here. We don’t know if Dany was justified in her burning, if Jon was justified in his last-minute distrust of his beloved, or if Tyrion will suffer for betraying his queen so that Jaime could live – just so he could die moments later. But we do know that in this last hopeless moment at King’s Landing, the Hound gave us hope, laughs, and felt totally in-character until his last fiery end. And that’s why, in his dying moments, he became this episode’s Most Valuable Player.