Only one episode left of Game of Thrones, and we have no idea where things may go, or who will sit the Iron Throne, or what will become of Westeros at all. Instead of looking to Westeros’ many prophecies to answer these questions, maybe we should pay closer attention to another possible hint: Daenerys’ visions from the House of the Undying. the visions. Let’s take a look back to one of the show’s most iconic scenes and break down what it looks like given what we know now, and what it could mean for the future.

Spoilers of Game of Thrones latest episode, “The Bells,” below.

What is the House of the Undying?

After her dragons are kidnapped by the warlock Pyat Pree in Qarth in the season two finale, Dany ventures into a building known as the House of the Undying. The mysterious tower is a headquarters of sorts for the warlocks of Qarth, and thus it defies the laws of physics. It’s not a physical space so much as a headtrip, and when Dany ventures in, she is subjected to a series of visions. They don’t immediately make sense to her or to us, but they have come into more meaning in the later seasons.

When she first enters, she walks into a vision of the throne room of King’s Landing, covered in what is either ash or snow. (More on that in a bit.) She walks up to the Iron Throne and puts her hand on it, but is distracted by a sound. She turns away and walks to a door, which opens to the Wall. As snow blows in her face, she sees a small tent in the distance and walks to it. Inside are her dead husband, Khal Drogo, and her son, Rhaego, who was stillborn but appears in her vision as a healthy infant. The fantasy versions of her dead family tempt her to stay, but Dany presses on. She is intent on saving her dragons, and she eventually finds her way back out with them in tact.

Fans have been discussing her visions has been going on for years. In fact, it started way before the show; in George R.R. Martin’s books, the sequence is much different. Dany sees visions that foretell events in later books, like the Red Wedding. That means the visions are indeed prophetic. So what do they mean?

Dany seeing the Wall likely predicted the season seven episode, “Beyond the Wall,” when she traveled North to save Jon and fight off the White Walkers. (It’s also when she lost the first of her dragons.) But what does that stuff in the throne room represent? Could it be… the ash of King’s Landing, the city she burned to the ground in “The Bells”?

That’s one read on the moment, and it could signify that the show was laying the groundwork for her turn to “Mad Queen” status. Was Dany unknowingly seeing a vision of her future? Is that why she lightly touches the Iron Throne but never sits on it? It’s highly possible the show has been telegraphing this moment for a long time. 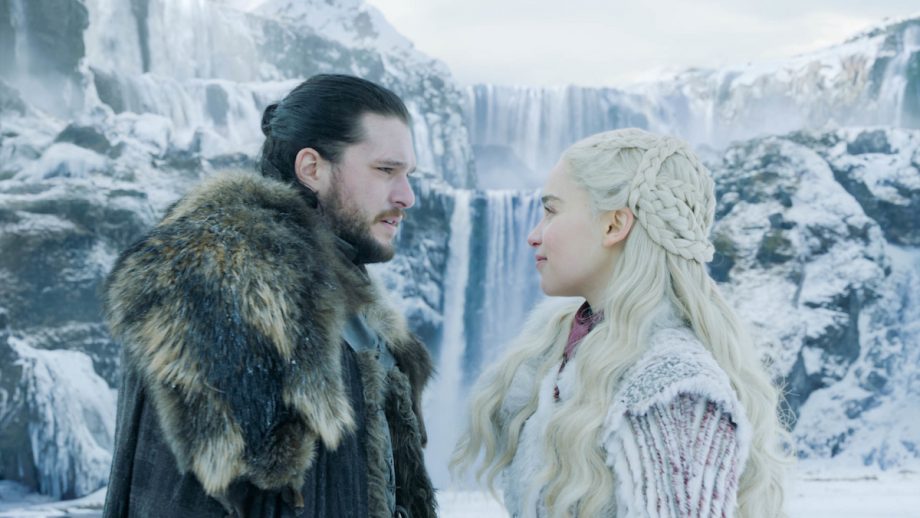 That said, there are a few holes in that theory. First of all, if you listen to the commentary track on “Valar Morghulis,” you’ll hear actress Emilia Clarke and the episode’s director Alan Taylor refer to the substance in that scene as “snow.” They make several references to how they filmed it like it was snow, and Taylor even says the scene looks like “Christmas.” It’s hard to tell, exactly, but it even looks like there are icicles hanging off the pillars of the room.

What’s more, showrunners David Benioff and D.B. Weiss didn’t know Martin’s intended ending until after season three, when they sat down with the author to plot out the rest of the series. It’s possible they had received certain hints that Dany would turn, or inferred for themselves, but it’s also possible the snow on the throne was signaling something else: Jon’s parentage.

We learned last season that Jon is half-Targaryen and the rightful heir to the throne. Dany seeing “snow on the throne” could be hinting at the future rift between the two lovers and relatives, which in its own way still led to Dany’s turn; without the threat of Jon’s legitimacy, Dany might have never rained fire on King’s Landing.

If the other visions have come true, what does it mean that Dany saw Drogo and her son? It could mean that Dany is being set up for a big death, and that she’ll soon be reunited with those she’s lost—it probably won’t be a literal reunion, but a metaphorical one. It seems pretty likely that Dany has to die. But how will she go? Or will she evade it after all?

We’ll know for sure when Game of Thrones comes to a conclusion this Sunday.