10 (Not So) Hidden Film Credits Jokes You May Have Missed

Filmmakers continue to come up with creative ways to keep audiences’ attention during the credits. They use a wide variety of tactics from animated sequences to mid-credits or end-credits stingers to well-placed jokes.  In the age of streaming (and streaming services that push viewers away from credits), I was delighted to find a little joke in the first offering from Leigh Janiak’s R.L. Stine adaptation Fear Street trilogy. In its honor, here are a few of my favorite joke credits.

First and foremost, shoutout to writer-director Leigh Janiak for crediting CGI flies Paul, Christina, and Guillermo. Move over, Andy Serkis, there’s some new stars in town! While the horror film is chock full of heroes and villains, careful viewers are sure to be moved by the brave performances of these energetic insects. Flies don’t know good from evil. But they sure do know how to hold the camera’s gaze! Next stop, stars on the Hollywood Walk of Fame.

Pretty much all of the opening credits sequences for British comedy troupe Monty Python and the Holy Grail is one big joke. There are, among other things, silly Swedish subtitles and references to alpacas written by Michael Palin. My absolute favorite bit within the bit is a credit for Miss Taylor’s Mooses. The implication being that Elizabeth Taylor appears in the film (she doesn’t) and that she would have had her mooses made custom (she absolutely would). 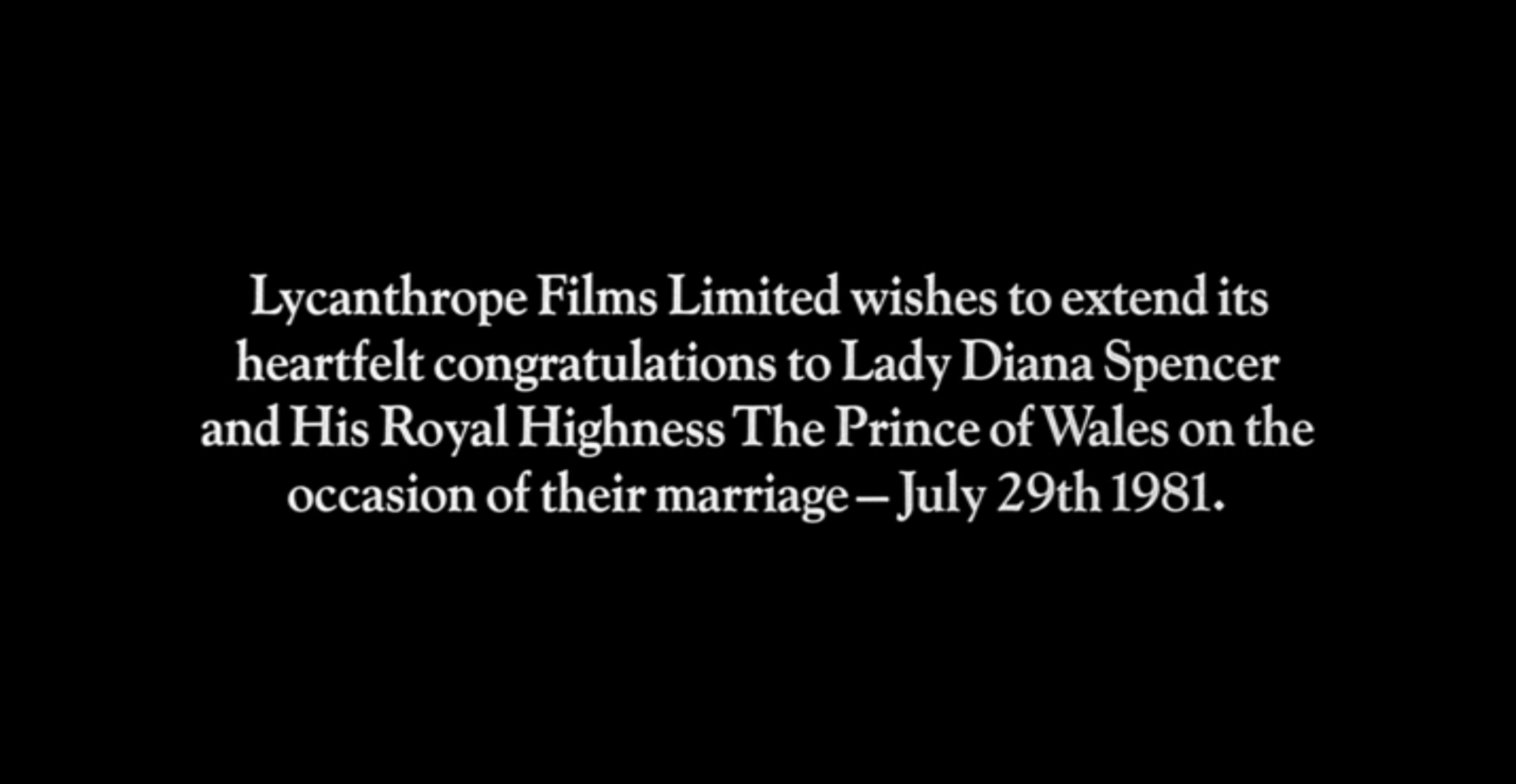 In an attempt to get arrested before he turns back into a bloodthirsty werewolf, David (David Naughton) loudly hurls insults at cops in Trafalgar Square, at one point using the f-slur to describe Prince Charles. To make amends for the insult, the filmmakers ended the credits by congratulating Prince Charles and Princess Diana on their wedding, which took place on July 29, 1981. The film was released just a few weeks later on August 21, 1981. 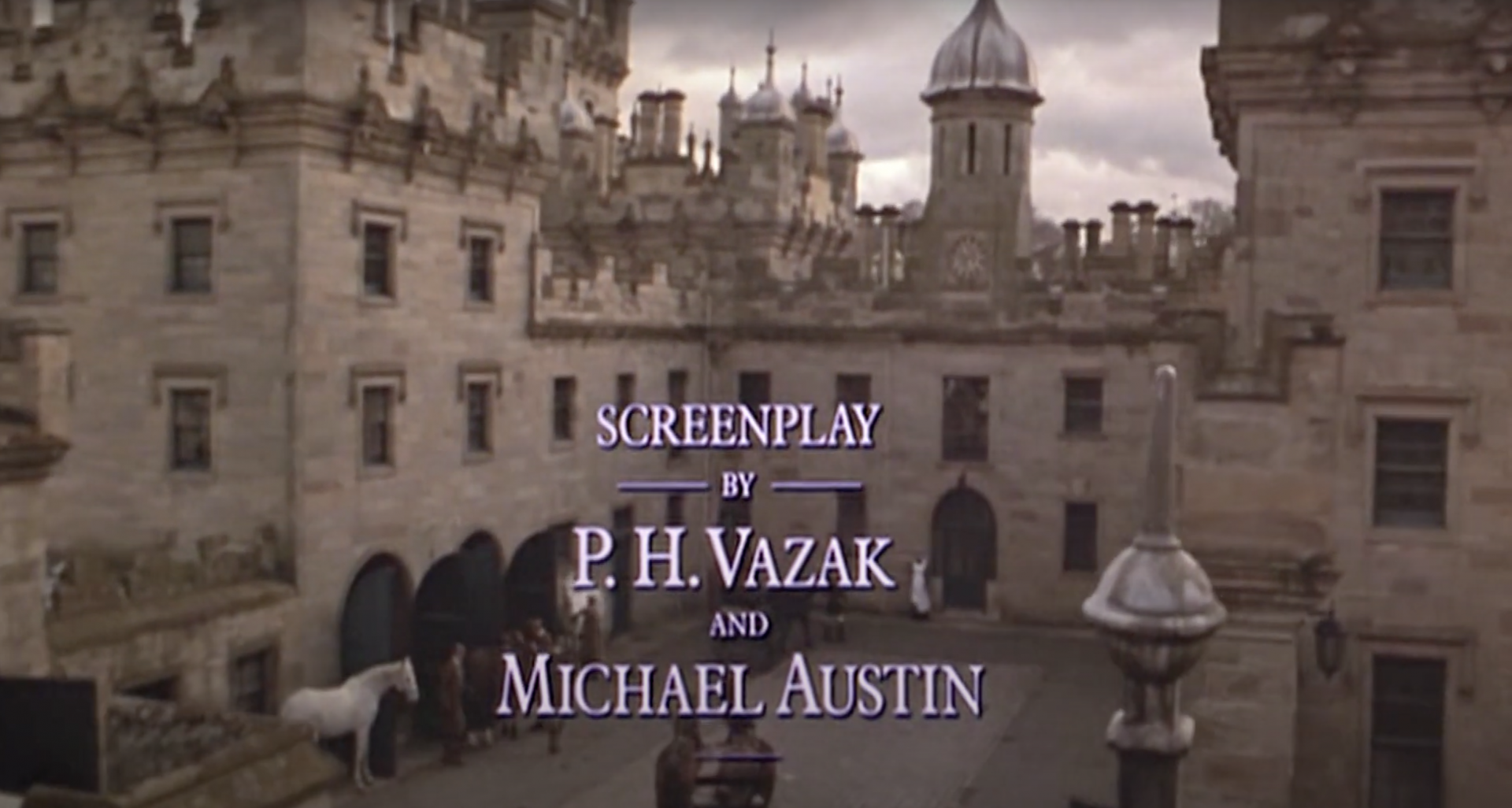 Hot off his Oscar win for Best Original Screenplay for Chinatown, Robert Towne was set to write and direct an adaptation of Edgar Rice Burroughs’s “Tarzan of the Apes”. Towne was replaced by Hugh Hudson as director, whose film Chariots of Fire had just won Best Picture. Michael Austin was also brought in to do rewrites. Unhappy with the alterations, Towne had his name removed from the project. And that is how his Hungarian sheepdog P.H. Vazak was nominated for an Oscar! 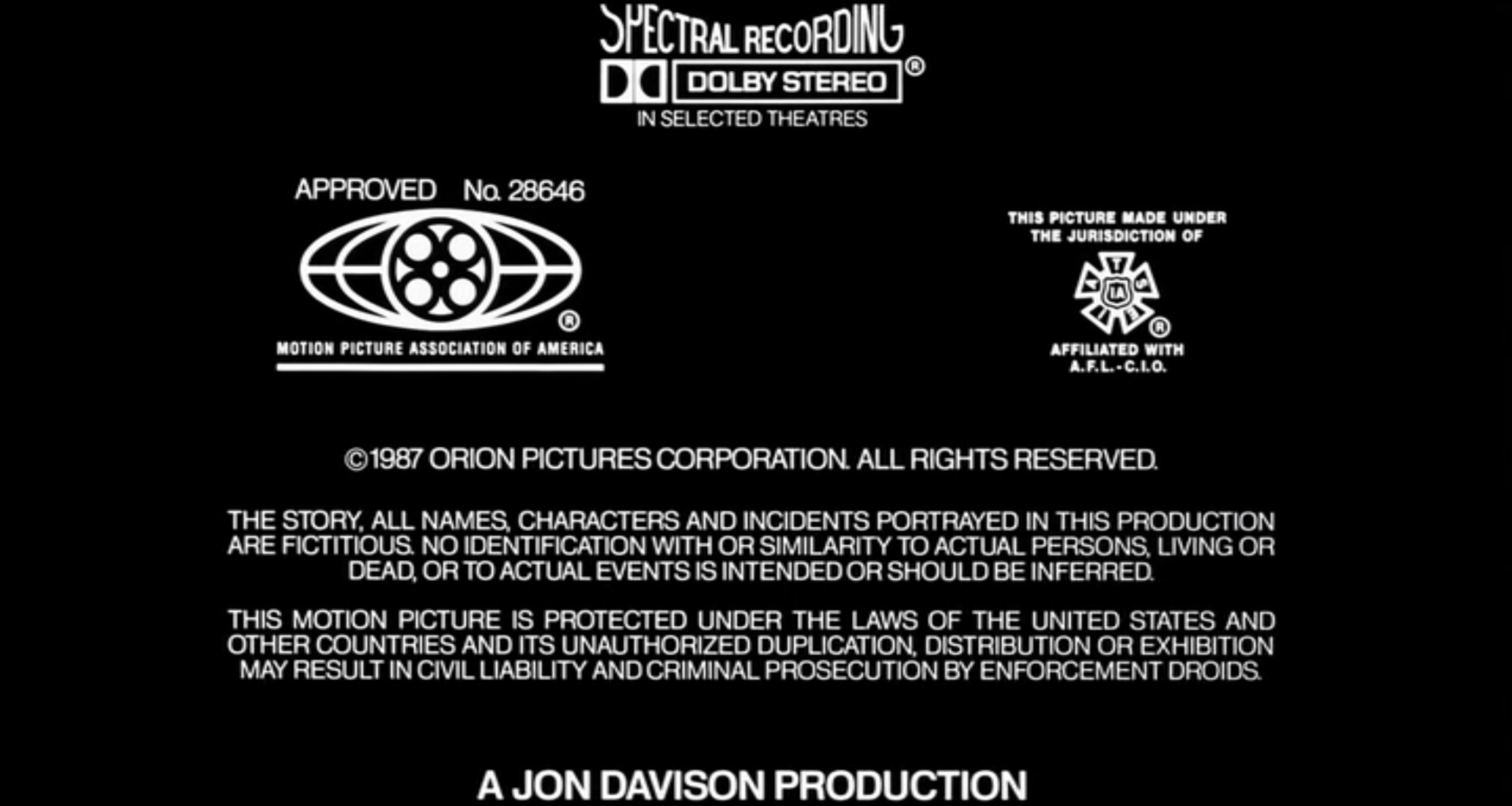 Hopefully, if you’ve gotten to the end of the credits you know the whole plot of RoboCop. Omni Consumer Products has taken over the Detroit police force, replacing officers with new law enforcement droids called ED-209. When one of the droids malfunctions, an eager junior executive jumps at the chance to try out his own invention: RoboCop! This cheeky credit reminds viewers they shouldn’t pirate the film – or else.

In one of the two (2!) wonderful audio commentaries on Kino’s Blu-ray for this cult classic, writer-director Steve De Jarnatt shares that Doctor Biobrain was his cat at the time he was making the film. Miracle Mile had a ten-year journey to the big screen. It even made an American Film magazine list as one of the ten best unmade screenplays in 1983. I’m sure Doctor Biobrain was a great comfort during that long decade of development.

The Naked Gun! From The Files of Police Squad (1988)
Director: David Zucker

Zucker Brothers’ films are a joke a minute, with this being the first of three films featuring Leslie Nielsen as the bumbling police lieutenant Frank Drebin. (He originated the role on the television show Police Squad! earlier in the decade.) Producer Robert K. Weiss, whose credits include producing The Blues Brothers and co-creating the sci-fi show Sliders, was presumably going through a divorce during the making of this comedy. 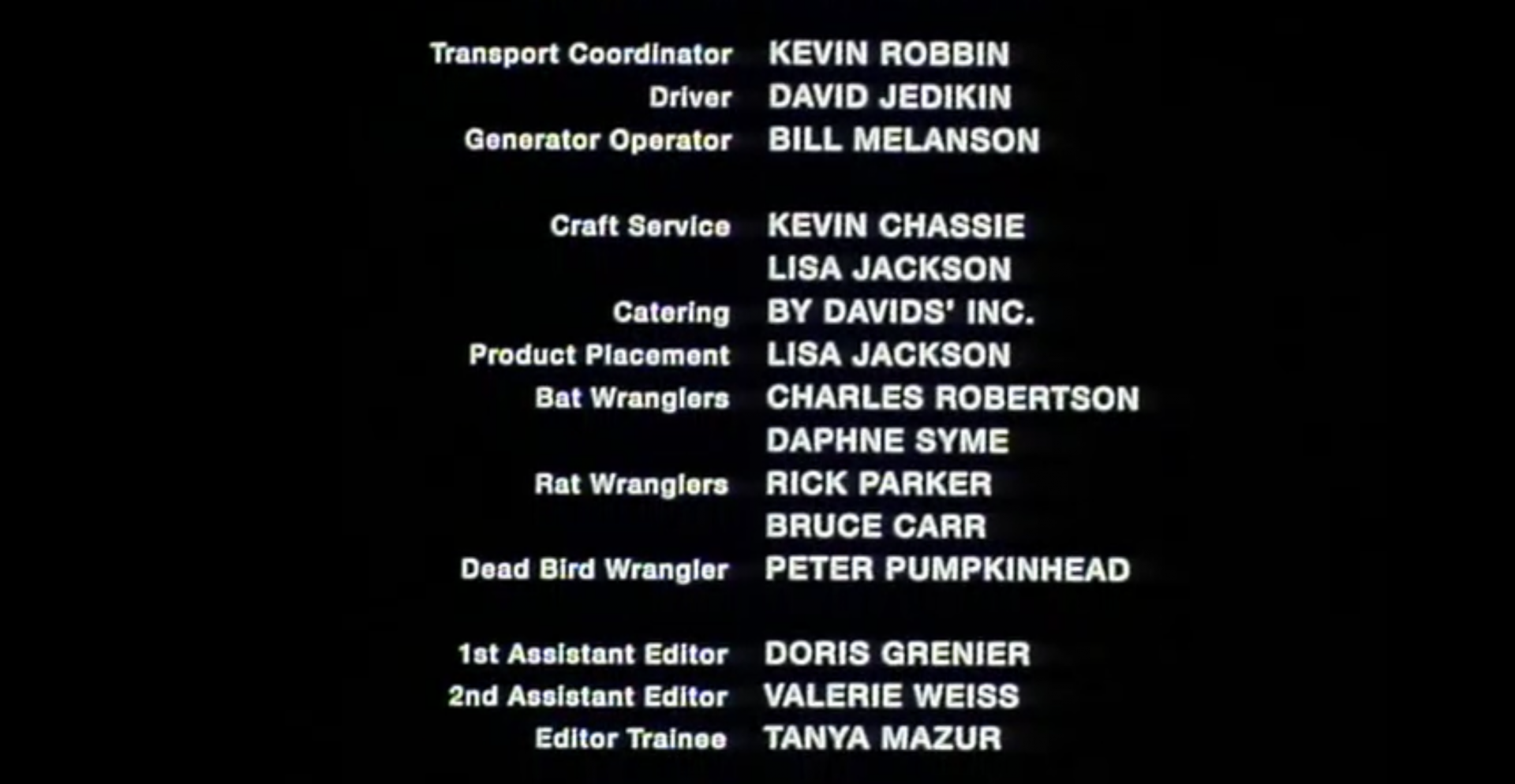 Animal wranglers are a common credit on almost any film. But I can’t ever remember seeing a credit for a “dead bird wrangler” before. This Canadian vampire film straddles the line between comedy and horror, with just the right amount of blood, gore, and of course donuts. It even features a delightfully serious performance from Canadian body-horror auteur David Cronenberg. 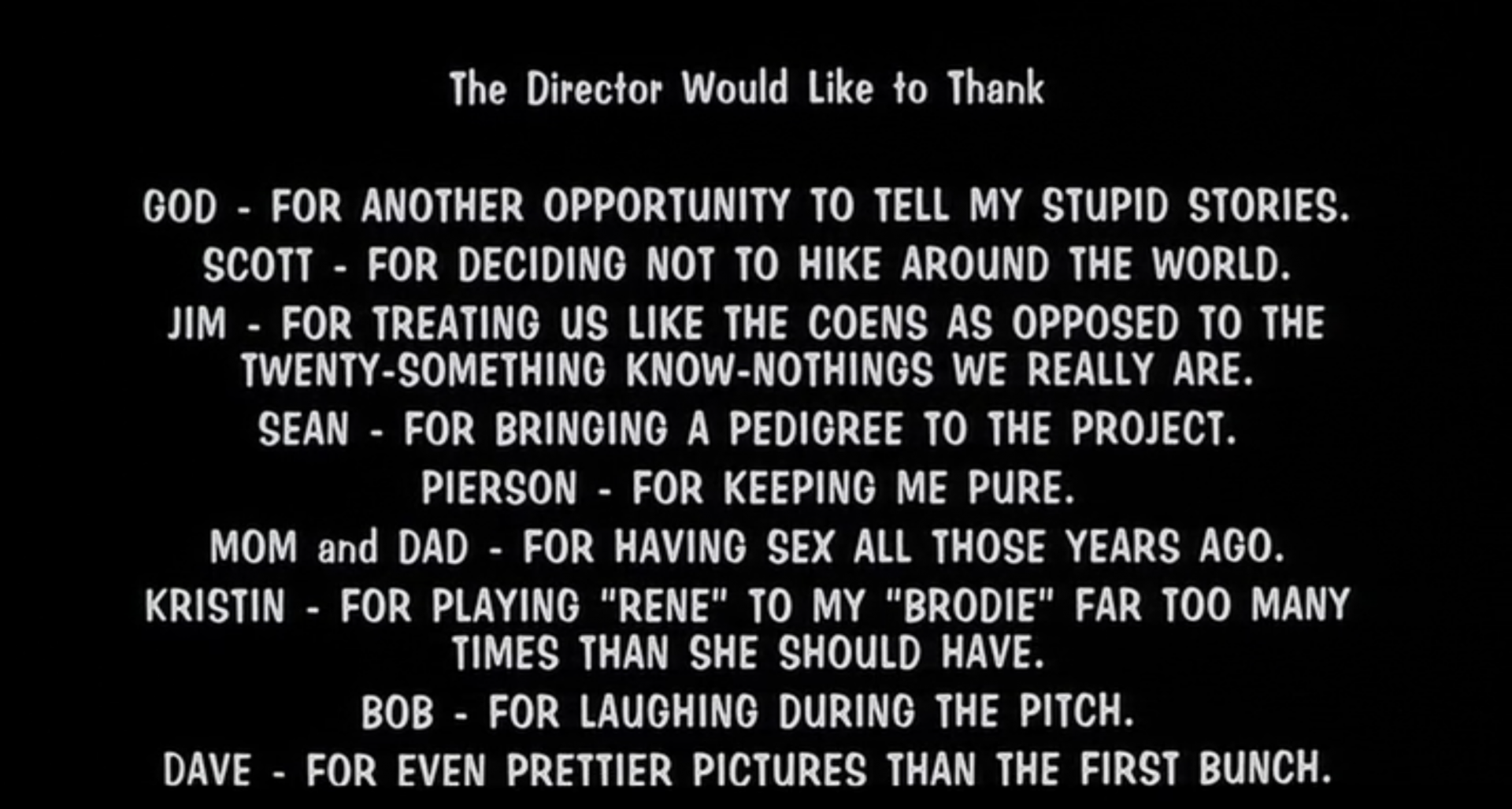 Writer-director Kevin Smith had so many people to thank on his second feature film that I couldn’t feature them all in one screenshot. If you look really close in the middle, he thanks his parents “for having sex all those years ago.” If only we could have seen their faces. They probably looked like Daniel Kaluuya’s mother when he similarly thanked his parents at the Oscars after his Judas and the Black Messiah win.

Shot in and around Santa Rosa, California, like Hitchcock’s Shadow of a Doubt, the producers of Scream had intended to film the high school scenes in Santa Rosa High School. However, when the school board read the script, they rejected the production based on its premise of violence towards teens and its dark, cynical dialogue. Production then moved to the Sonoma Community Center, a few miles southeast of Santa Rosa.