Let me tell it to straight: Fungeon Party from Wizkids is the tabletop equivalent of a B-movie. This is the Sharknado of game designs, cringe-worthy title and all. It waffles between absurd and hilarious, and it’s simply the type of game that’s not going to be for everyone; it’s totally cool with that.

Fungeon Party – sorry, after saying it dozens of times I still can’t help but laugh and shake my head – is a fantasy dungeon crawl as you’ve never seen it. It has some familiarity. Players slip into recognizable roles such as barbarian, paladin, or wizard. Instead of slinging spells or thrusting steel you’ll be tossing bones and acting the fool. You see, this isn’t really a dungeon crawl, rather it’s a full blown party game of silly antics and hilarity.

Play is simple. You build a deck of quests and set a timer. Typically you’ll encounter six such challenges but you can really include any number. The timer is important as it’s continually running the course of the game and breathing down your neck with a gallon of pressure. You’re afforded 30 seconds per card you choose to include at the start of the game, and you’ll need every single second.

Then someone yells “go!”, the traditional dungeon crawl equivalent of a starting gunshot. The top card of the shuffled quest deck is flipped and all hell breaks loose. Everyone starts reading the card, or trying to depending on their angle. Typically the challenge leader as denoted on the card will read the text aloud. That timer’s churning away in the background though so they stumble upon words and rush the whole thing. Your first smirk emerges.

When you realize you need to each take one of your character’s six-siders and roll it off your nose into the box, well, then you can’t help but laugh. But this is no joke, Fungeon Party is serious business and failing the challenge means a loss in group health. This can be split amongst the members so your tanky fellow can tank and your wizard can wave from the safety of the background.

Many of the challenges can be repeated ad nauseam. Each second counts, however, and some you may choose to voluntarily capitulate and move on. The goal is to make it through the set of quests with at least one second to spare. This won’t be happening your first few plays.

Don’t worry, your trusty party members come bearing special abilities and strengths to overcome these callous threats. Each character possesses a special ability they can use once per game which is key to survival. You can skip a challenge without penalty, or manually set your dice to any values, perhaps to overcome that difficult test of rolling a straight. The timing of when to apply these and when to hold back is a crucial strategic decision key to success. In addition to health, your ability charges are the main element of resource management in this game and responsible for a degree of the depth.

One of the odd things about this design is the commitment it shows. It boasts a huge stack of quests ensuring you will see new tasks and surprises pop up many plays down the line. This is integral to the game’s success as a three-minute playtime ensures the laughs will flow over and over.

Beyond the myriad challenges lies a quirky campaign system. Yes, you read that right – this three-minute ditty has a campaign mode. There’s not a whole lot to it as you simply gain XP tokens for completing challenges, but it allows for some group discussion on how best to spend that experience.

Players can gain new charges for their special powers as well as additional health tokens. The simplistic nature of this system is immediately evident as you don’t gain new abilities or tools, you can simply withstand greater pressure and hardship. You track these gains and then continue with a new set of challenges upon your next play. While it’s not sophisticated or deep, it’s appropriately amusing and offers incentive for continual play. 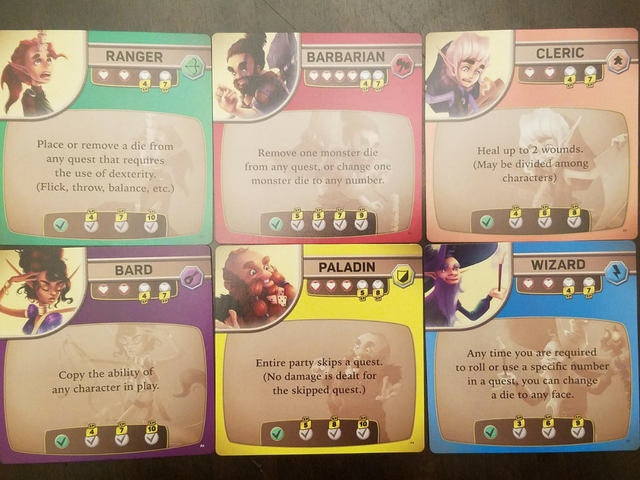 Fungeon Party walks that fine line between jocular and frivolity. It’s the type of game that forms a crowd of spectators, pointing and laughing at your peril. It’s humor can occasionally be undercut by the annoyance of retrieving dice scattered about the floor and under nearby furniture, but it’s all part of the ongoing performance. It never takes itself too seriously and it’s so brief and compact that it’s hard not to say yes again and again.

What are your favorite silly party games? Let us know in the comments!  And be sure to join host Becca Scott on Game the Game every Thursday here on Geek & Sundry to watch the best boardgames played with fantastic guests!