For a solid five years in the ’80s, Freddy Krueger was America’s horror sweetheart. And New Line Cinema almost never turned down an opportunity to trot Freddy out to promote himself. Some of those Freddy promo appearances from the Nightmare heyday you may have seen before, such as Englund as Freddy as a guest MTV VJ, or doing a “press conference” with Jason Voorhees for Freddy vs. Jason.

But a couple of old, rarely-seen promos featuring Freddy have popped up recently, and they illustrate how quickly Freddy evolved from a terrifying boogie man into a Halloween-season stand-up comic. In one of them, he even wears a Santa Claus beard. Yup, they went there. 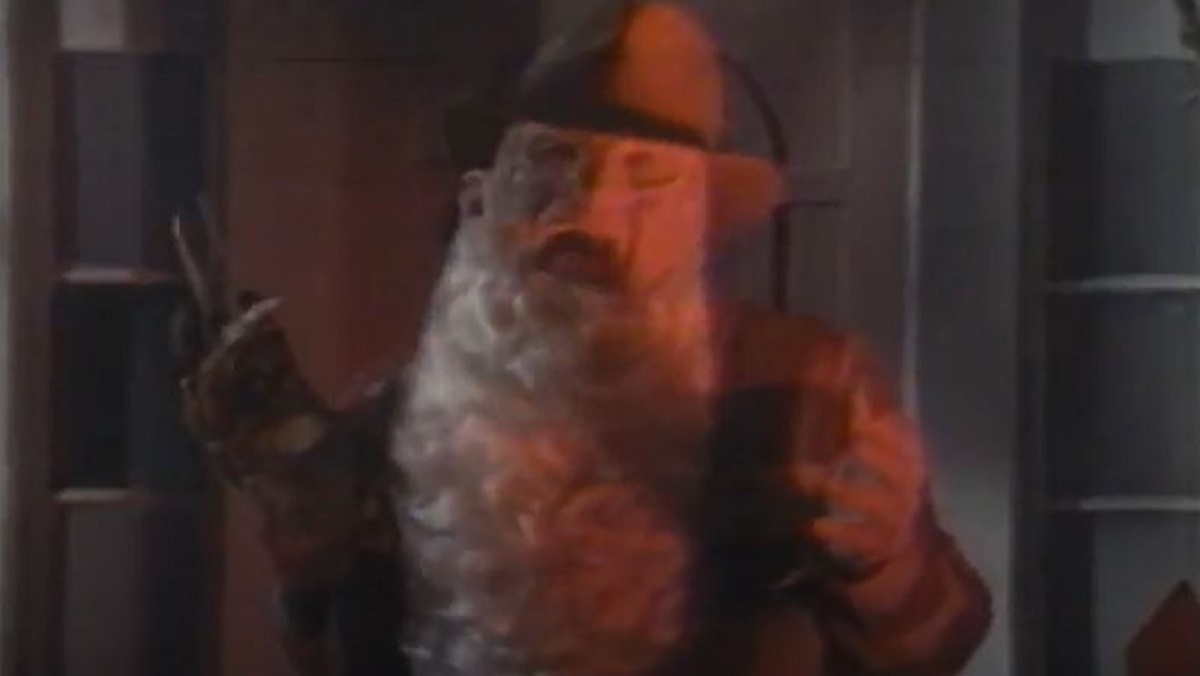 The first one actually doesn’t seem to feature Englund, but another unknown actor in the makeup. The video was a video rental store promo for the British market, unearthed by Horror Ads. The “Alperton Lane” it refers to is the street in London where Warner Bros. Home Video offices were located.

Lost to time is the name of the actor portraying Freddy here, but he sure sounds like Robert Englund. A few times a British accent pops up under all that voice distortion, so we’re guessing it’s not. Nevertheless, Freddy is still a terrifying slasher here, hiding in the shadows. This is very much reflects his portrayal in the first two films, and promoting A Nightmare on Elm St. 2: Freddy’s Revenge, he’s the same. The poor victim is actor Kerry Shale, a North American character actor who popped up in different British productions of the era.

This next one, posted by the Halloweenies podcast Twitter account, is definitely Robert Englund though. It’s a promo for A Nightmare on Elm St. 4: The Dream Master. This was a huge grosser in 1988, the biggest of the franchise at the time. Since the VHS was hitting rental stores that Christmas, there’s a whole “Freddy as Santa” thing going on. In just two years, Freddy had gone from the source of our nightmares to a one-liner machine.

A NIGHTMARE ON ELM STREET 4: THE DREAM MASTER hit home video just in time for Christmas ‘88 and Media recruited Freddy Krueger himself to sell it to video retailers in this holiday themed promo reel.

Englund doesn’t even bother to use his voice distortion here, so he kind of just sounds like a regular dude. Points to Freddy though; he used the terms “Nightmare before Christmas” and “Sandy Claws” in this promo. A solid five years before Tim Burton ever did! Was the genesis of Jack Skellington this weird promo video? Yeah, probably not. But it’s a fun coincidence.

Both clips are a fascinating look into how quickly Freddy evolved in pop culture, and in record time. By the time the fifth installment,  The Dream Child, hit theaters in 1989, the air was leaking out of the Freddy balloon. But you can’t say that New Line Cinema and Freddy’s corporate masters ever missed an opportunity to sell their monstrous cash cow in any way they could.