The 11 Wackiest Episodes of FRASIER - Nerdist

The 11 Wackiest Episodes of FRASIER

Perhaps a greater honor than any and all of its 37 Emmy wins was Frasier’s billing as “the smartest show on TV.” An army of one in the effort to bring more deep cut references to opera and classical music to network television, Frasier went the extra mile to live up to the superlative. But as sharp and sophisticated as Frasier and its Crane boys may have been, they consistently showcased a superhuman proclivity toward incredibly stupid decisions. Ivy League educations and doctorates in psychiatry be damned, Frasier and Niles regularly exhibited the sort of judgment that, in real life, would have ostracized them from civil society or, in at least one instance, left one of brothers impaled. But the glory of television let their poor choices lead instead to delightfully wacky hijinks. If there’s one thing that the ostensibly highbrow half-hour comedy did best, it was forcing its heroes into increasingly convoluted and ridiculous situations.

So in honor of the 25-year anniversary of Frasier’s premiere—and the prospect of a future in which Frasier may once again grace our television screens—we’re recounting the best of Frasier and Niles and company’s fits of maniacal nonsense.

When Niles duels a guy 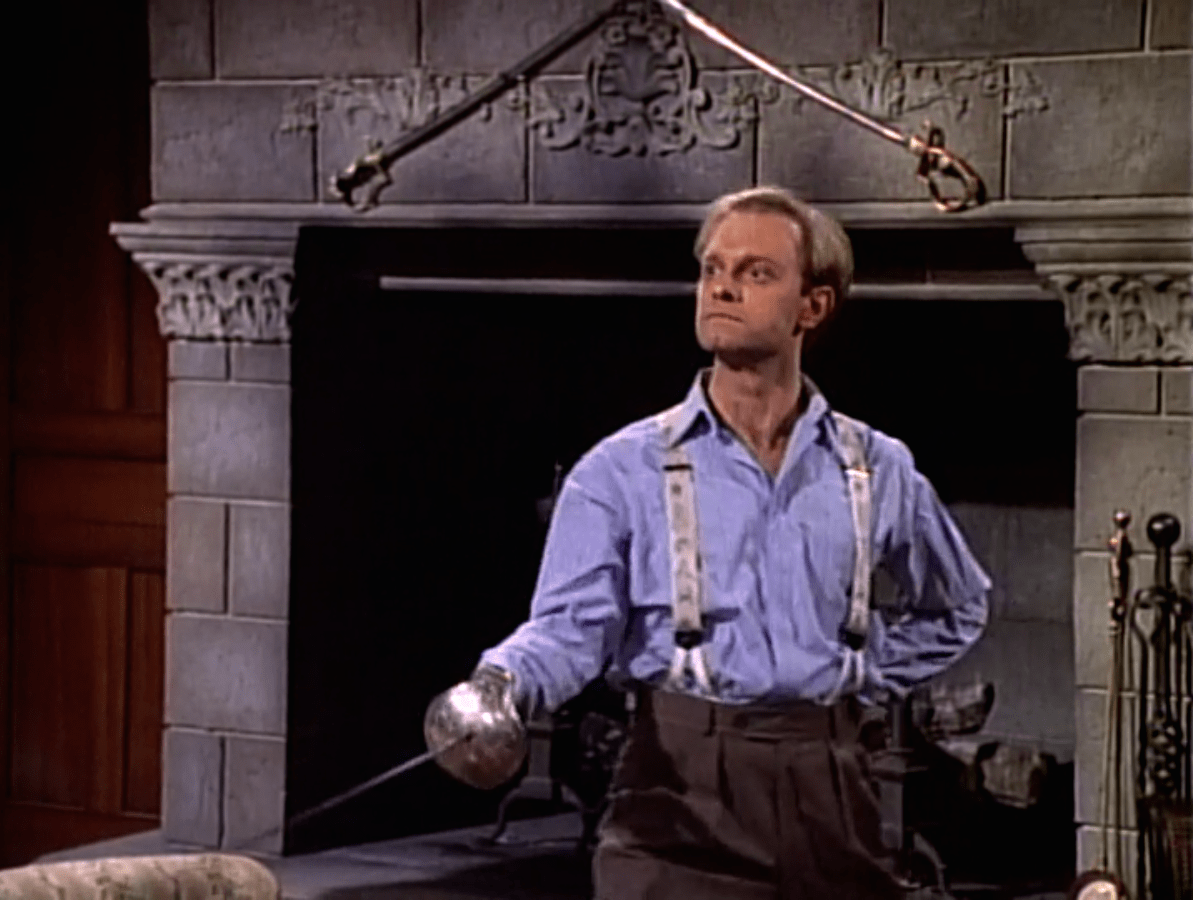 The title of this entry notwithstanding, the standout bit of wackadoo in this particular episode is not Niles’ duel with his wife Maris’ suspected paramour—a sequence that involves Niles swinging from a chandelier in less gallant a fashion than has ever suited Errol Flynn (or Sia)—but the younger Dr. Crane’s strained attempt to communicate with the man despite a language barrier. The result: Niles speaking in English to Frasier, who translates in Spanish to Niles’ housekeeper Marta, who in turn relays the message to Niles’ would-be cuckolder in his native German. It’s a bit borrowed from I Love Lucy, but one executed to comic perfection. 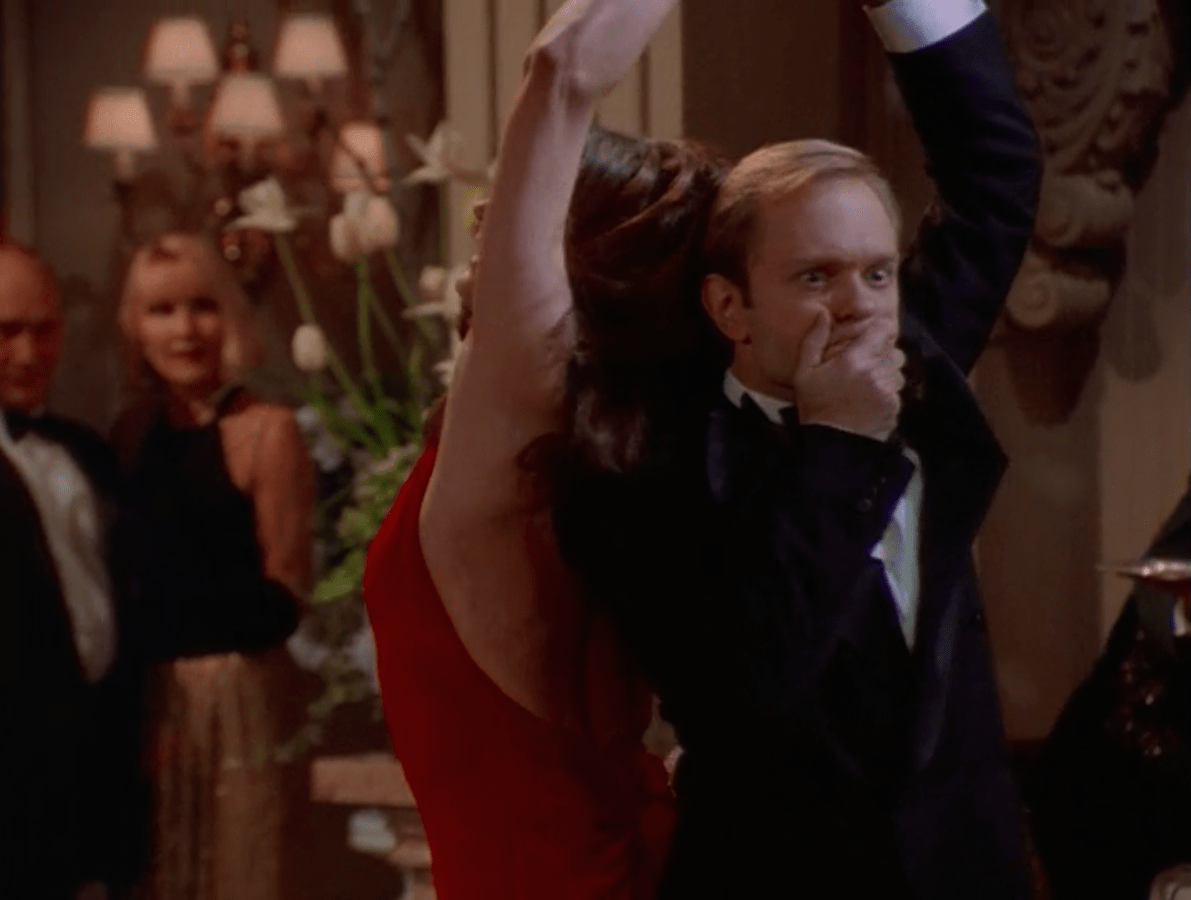 In a rare turn of events for the Crane clan, this particular bit of tomfoolery actually works out well for all parties involved. This distinction is owed to the fact that the charade is not born of the family’s usual inclination toward vanity and deceit, but instead of Daphne’s genuine interest in helping the depressed Niles through a difficult time. The final scene—in which an oblivious Daphne rebuffs Niles before he works up the courage to ask out a woman out for the first time since his divorce—is actually a rather touching display. 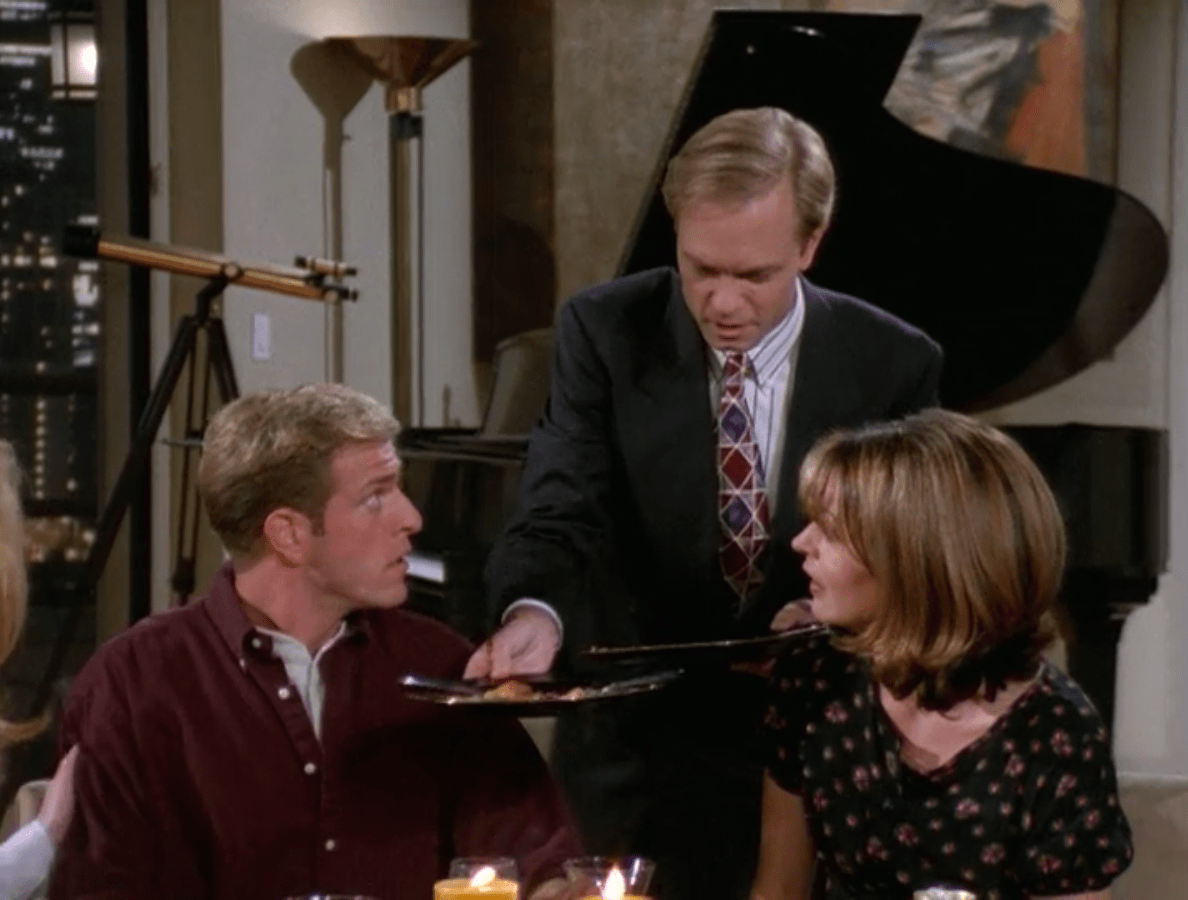 …one season later, however, the same ruse is reversed to a much more cynical end. Daphne employs Niles’ aid as a would-be husband to ward off the advances of an ex-fiancé, only to find herself enamored with her cleaned-up old flame upon their reunion. The episode also features Roz, pretending to be Frasier’s pregnant wife, and Martin touting himself as an astronaut, so things go off the rails to a degree bordering on self-parody. The result is guest star Scott Atkinson  telling the troupe what they’ve been deserving to hear for the past three seasons: They’re horrible people. (But then again, who on ’90s-era network television wasn’t?) 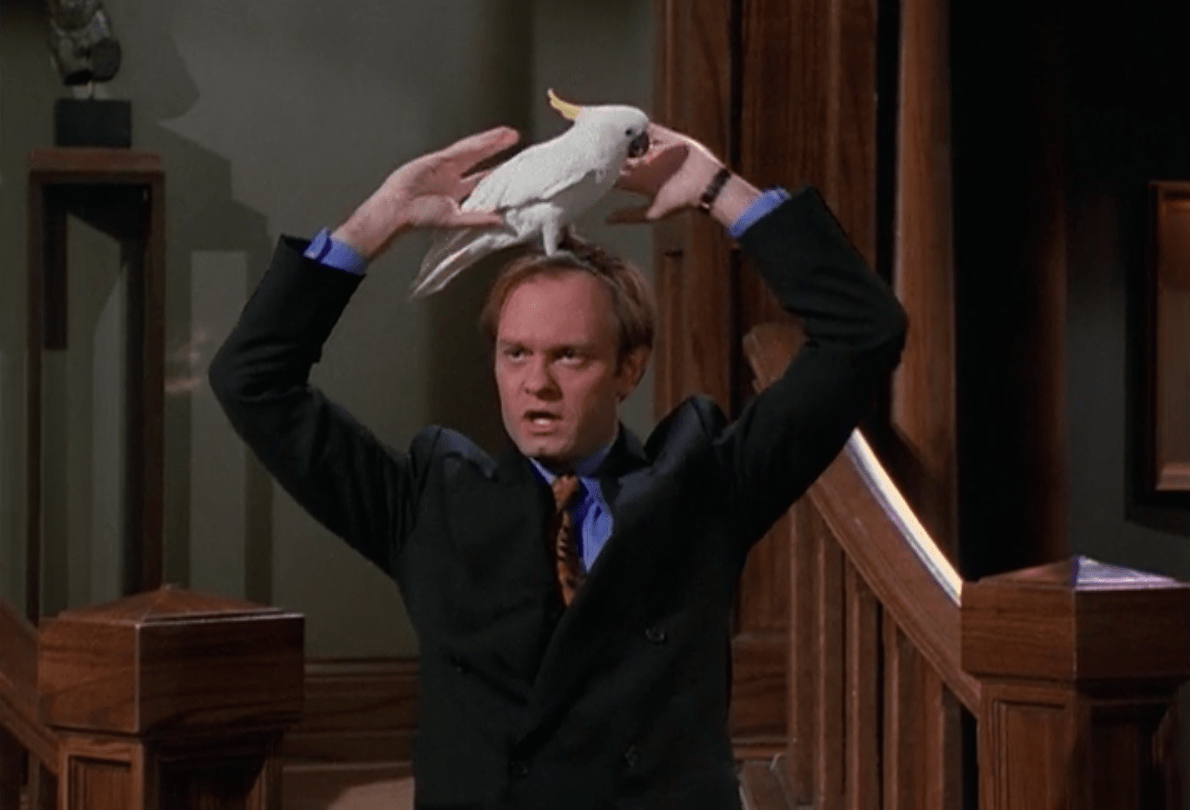 This episode is perhaps the best example of Frasier’s defining M.O.—the disruption of high society with a low brow calamity. A talking cockatoo with a proclivity for repeating incendiary gossip about Niles’ snooty neighbors affixes itself to the younger Crane’s head just prior a party he’s throwing for aforesaid stuffed-shirts. Frasier helps his brother out by attempting one of his world-class stalling sessions, though it all goes to pieces after a bashful Niles reveals himself and his gabby chapeau.

When everyone thinks everyone else is pregnant 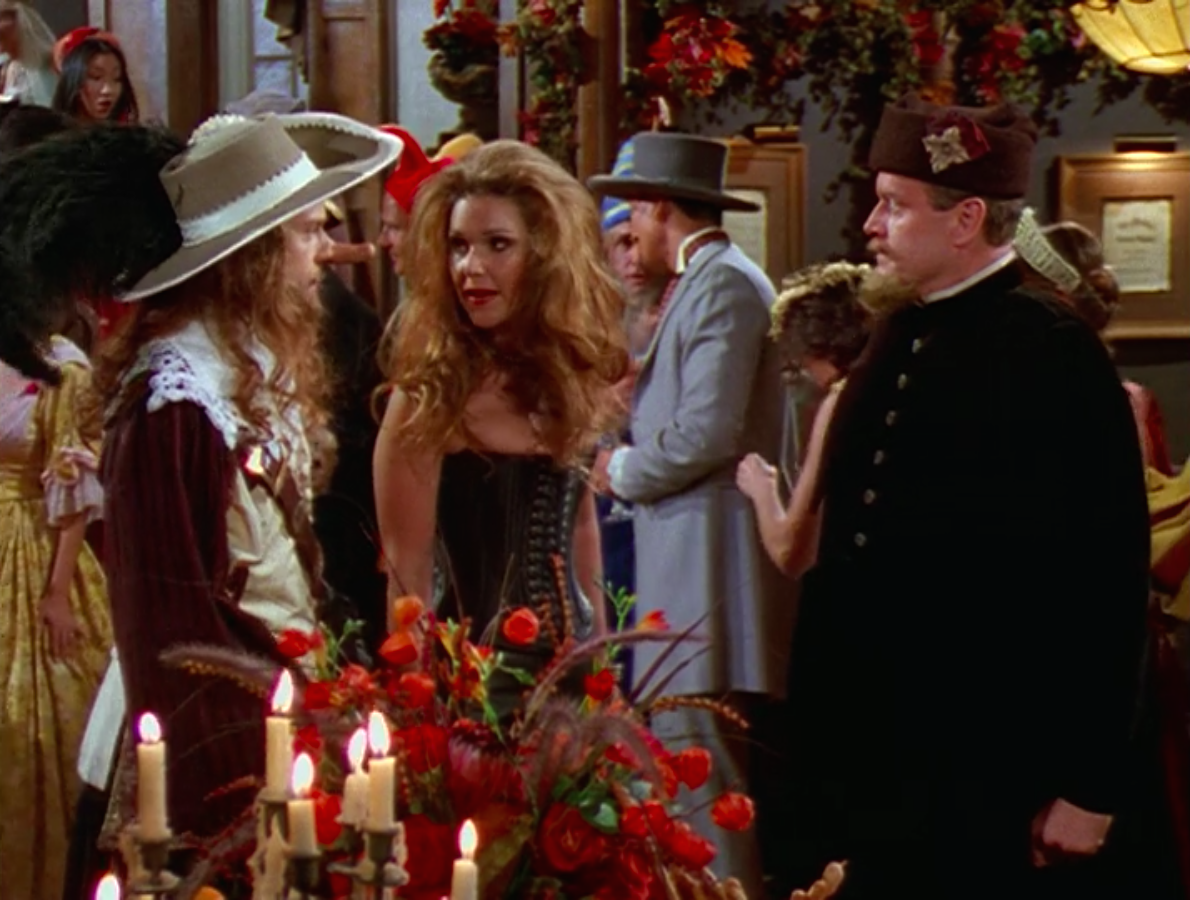 Miscommunication is a cornerstone of the screwball genre, from the works of Shakespeare to his 20th century counterpart Three’s Company. Thankfully, Frasier used the game-of-telephone gimmick sparingly, but used it effectively for this episode. Roz confides in Frasier that she might be pregnant, which leads Niles to propose to Daphne with the intention to raise his nephew as his son. Martin is also there.

When Frasier, Martin, and Roz hide in a cruise ship bathroom 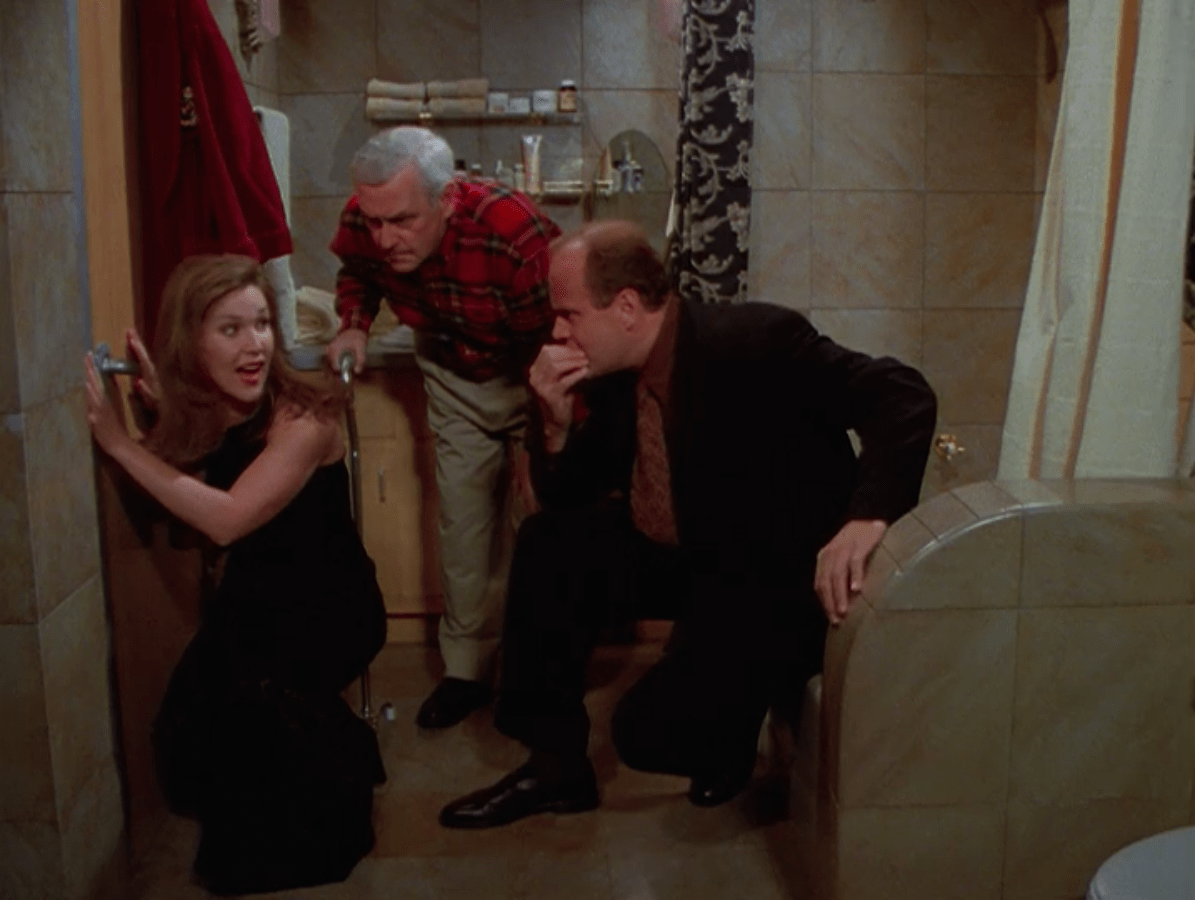 When everyone is trying to sleep with everyone else 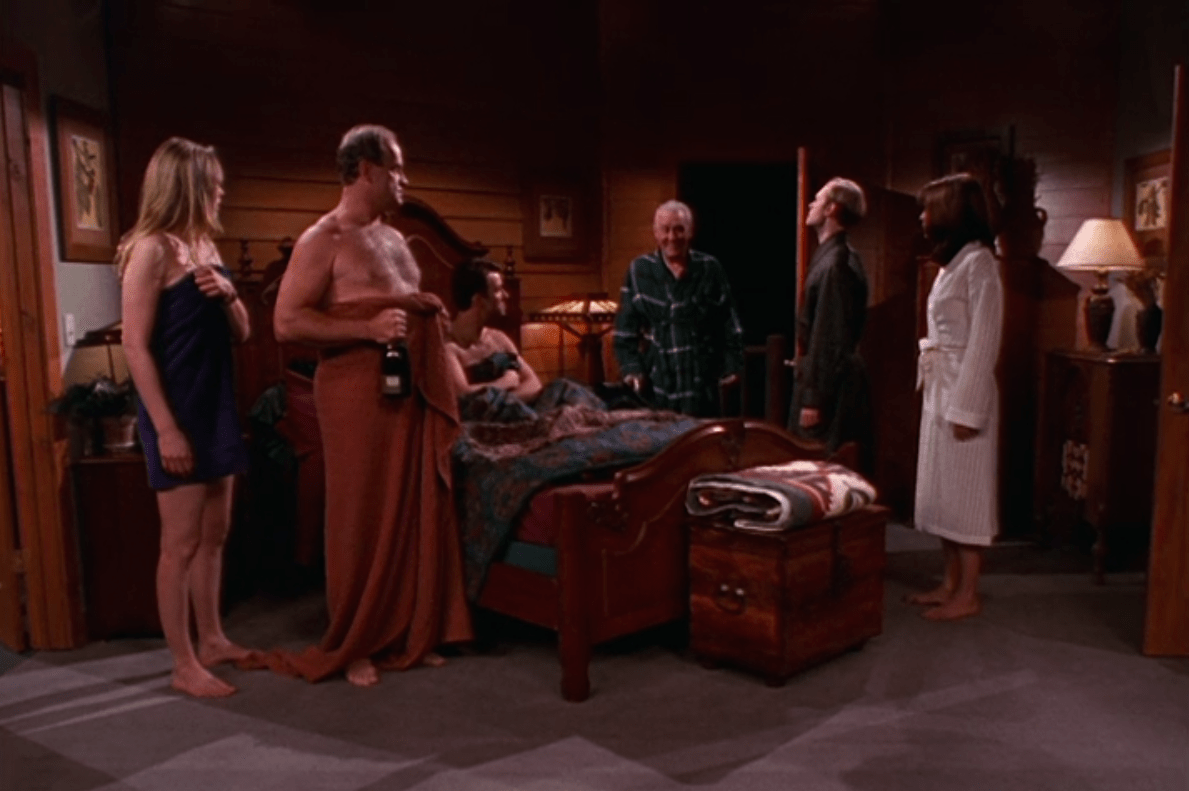 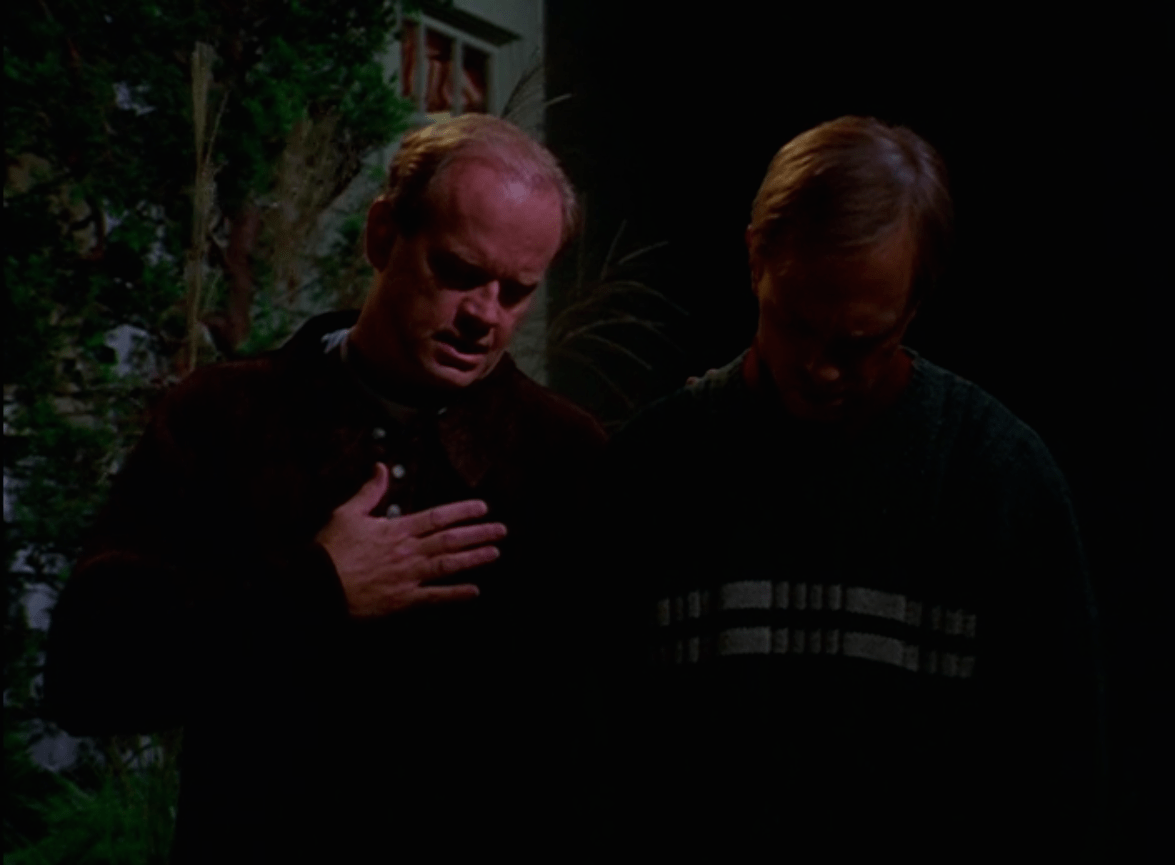 Episode: Season six’s “The Seal Who Came to Dinner”

Even without the inclusion of a rotting carcass, this accounts for one of Niles’ worst laid plans. In order to impress a gaggle of muckety-mucks, he breaks into his ex-wife Maris’ beach house to throw a catered soirée. As if he’d entirely forsaken his lifelong history with trying to do things, Niles is inevitably thrown for a loop by an odorous dead seal washed ashore just behind the house. Of course, he—a scholar and society man, mind you—opts to dress up in a nightgown and stab repeatedly. The whole ordeal leads Niles’ guests to suspect that he’s murdered Maris, which, as far as I’m concerned, the jury’s still out on.

When Frasier pretends to be Jewish 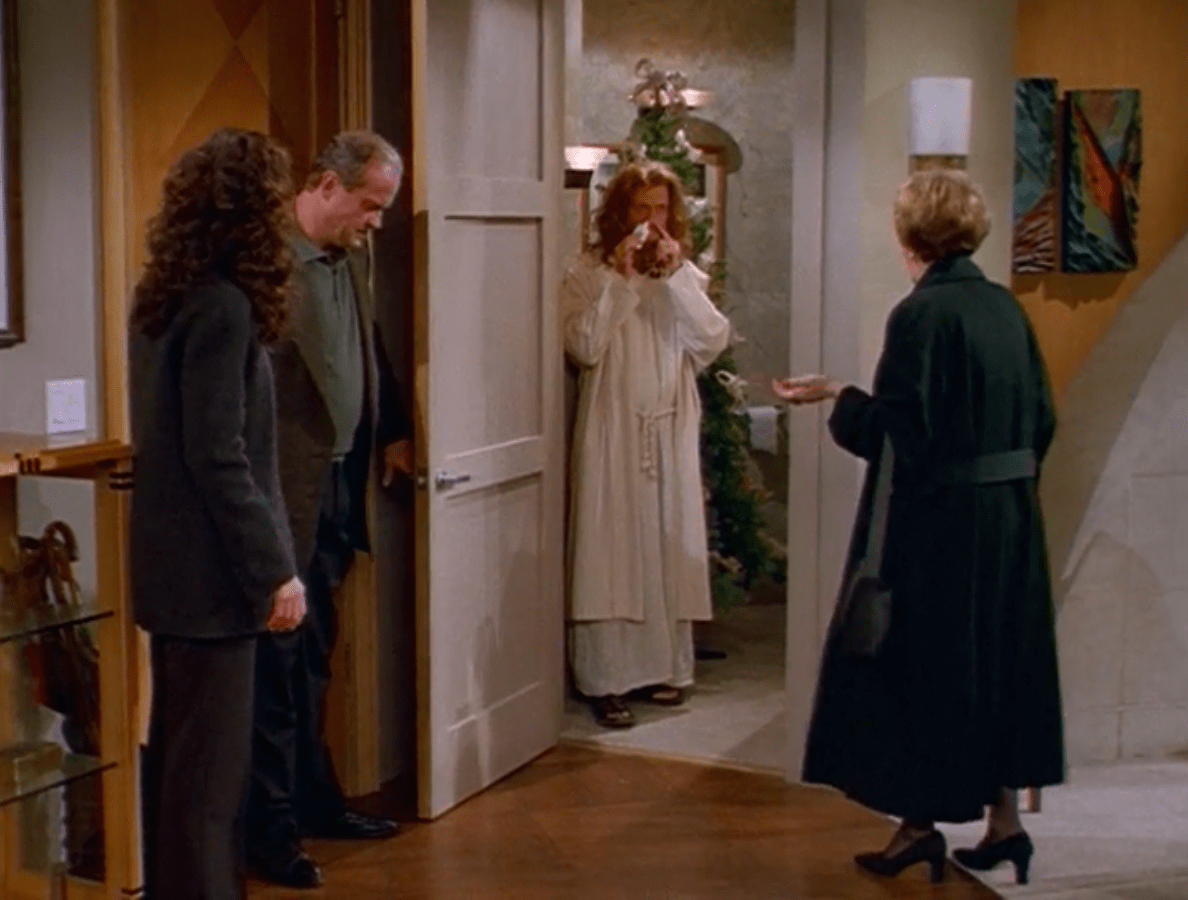 A lo-fi addition to the list, Frasier’s ploy to hide his goyishness from the discerning mother of a Jewish woman he’s dating is nevertheless—or, perhaps, quite appropriately—riddled with top quality shtick. Even if this episode’s peak zaniness doesn’t quite compare with that of the Crane family’s usual tomfoolery, Niles getting liberal with Yiddish and Martin completely misunderstanding the answering-questions-with-a-question stereotype make for hearty laughs just the same.

When Frasier and Niles have to cover up the murder of a bird and end up killing a guy, kind of 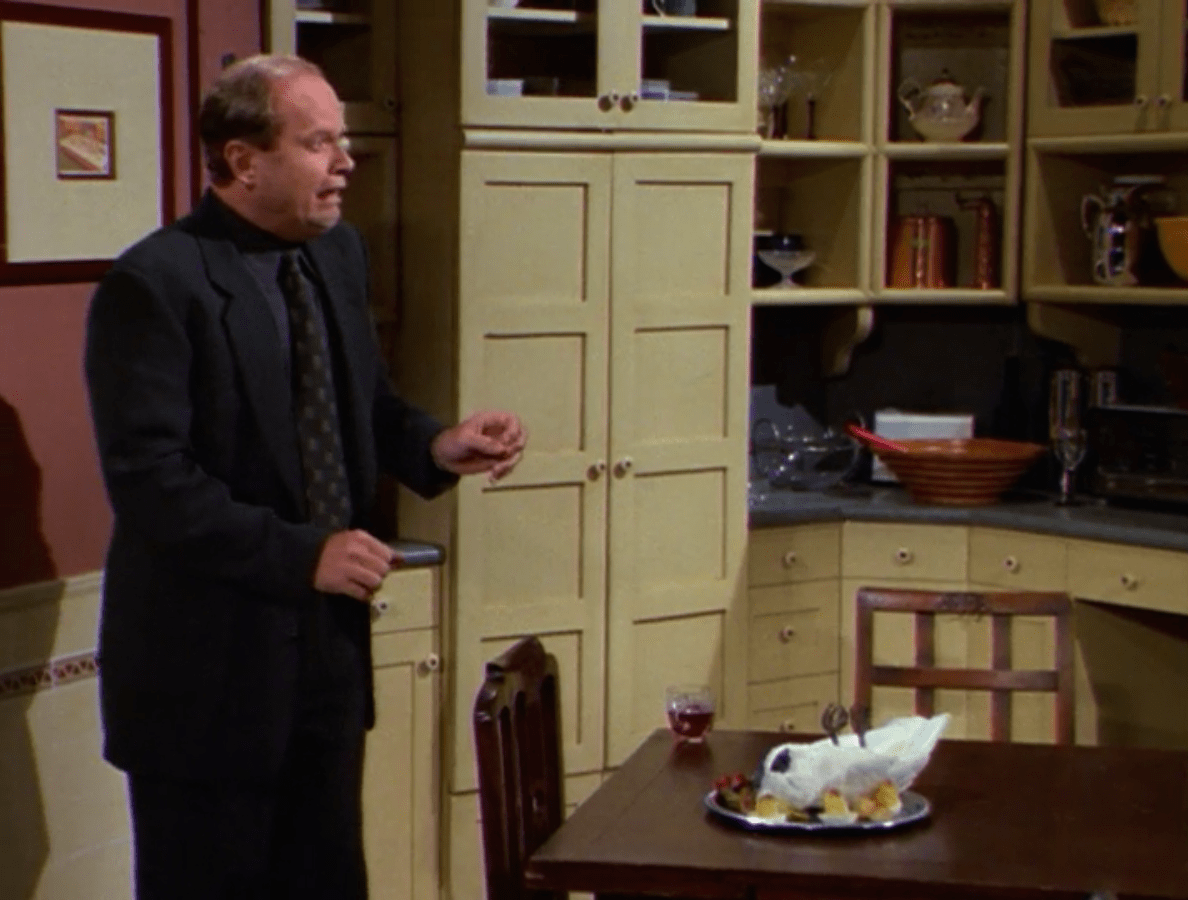 Another dead animal situation, and only a few episodes after the seal one! Worried that he may have inadvertently poisoned his guests, Niles employs Frasier for yet another stalling session, one that takes form as a game of Murder that turns fatal. Oddly enough, this especially gruesome turn of events actually manifests in Niles’ favor, considering that the sort of people who occupy the world for which he harbors such affection are even more self-centered and callous than he.

When Martin pretends to be dating the mother of Frasier’s nemesis, mostly just for spite 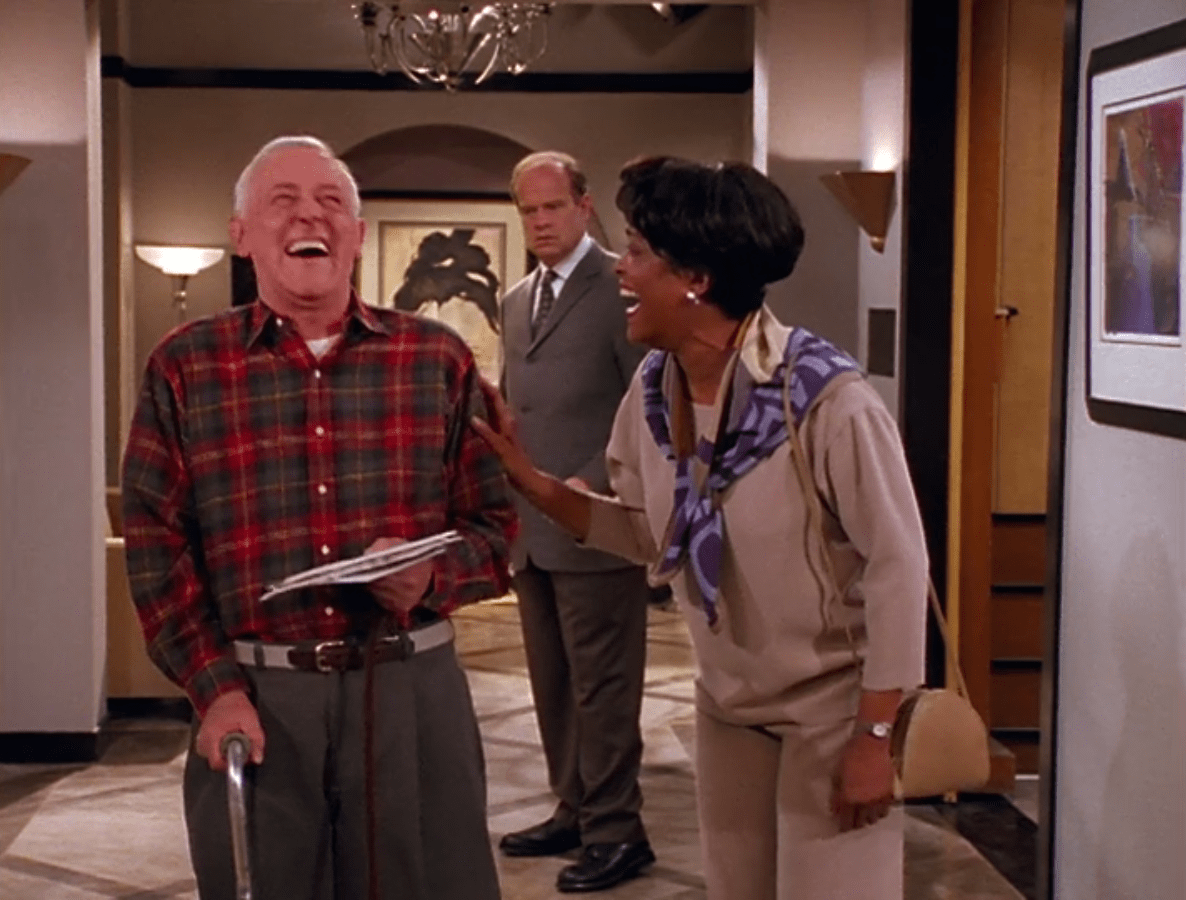 Martin isn’t usually the fulcrum of Frasier’s shenanigans, so it’s always a special treat when he cooks up a scheme. A far cry from his sons, Martin is not motivated by pride, greed, or man’s inborn aversion to dead bodies, but instead the joys of seeing Frasier get all huffy.

What are your personal favorite episodes of Frasier? Let us know!