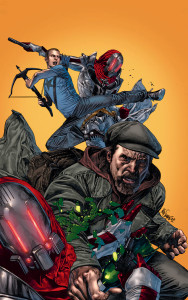 The Adventures of Archer & Armstrong is a comic about an immoral wino trying to make the world a better place by teaming up with the ex-cult assassin sent to kill him. Originally created by Bob Layton, Jim Shooter, and Barry Windsor-Smith in the 90s, Valiant is giving the world a fresh take on the pair for the 21st century. The book is funny, clever, features fish wearing fedoras, nuns with guns, and is like nothing else at the comic store. In a world of serious men and women publicly wearing what would be considered beachwear most circumstances, Archer and Armstrong are a breath of fresh air.

Here are four reasons why you should start reading The Adventures of Archer & Armstrong today!

Archer & Armstrong is about engaging, deep, and laugh-out-loud funny characters that you will fall in love with. Armstrong looks homeless, drinks like a fish, but is also strong, tough, and immortal. Archer is a master of martial arts who got where he is through discipline, and met Armstrong while trying to assassinate him. Archer also thought he was the antichrist, which turned out to be a total misunderstanding. The two characters are foils for each other, and a joy to watch. What will happen when Armstrong seduces Archer’s sister?

That’s right. Superman and Batman both first blasted off the pages of comics with radio dramas, and Archer and Armstrong are returning to the tradition. There’s a 45 minute audio drama available which introduces new readers to A&A.

They just started a new series 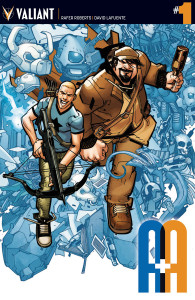 The Adventures of Archer & Armstrong #1 just came out a couple weeks ago, making now the perfect time to hop on the A&A train. Written by Rafer Roberts and illustrated by David Lafuente, the first arc of the new series concerns an ancient evil which Armstrong locked in his satchel 2,000 years ago and forgot about (he thought said ancient evil was just a drunken hallucination). It’ll be up to Archer to get Armstrong out of this one, and there are hints of a romance on the horizon for Archer. Rumor has it he has his eyes on everyone’s favorite flying fangirl, Faith!

Writer Rafer Roberts said of starting out a new series with such storied characters, “[It’s] absolutely a dream come true. I used to work in a comic store in the early 90s and instead of doing my job I would sit in the back room and read comics like Archer & Armstrong... Getting a chance to work on something legendary creators have worked on like, Barry Windsor-Smith and Fred Van Lente… was intimidating at first, but [also] totally awesome.”

Valiant Comics is a name you’re going to hear a lot of. The comics publisher has a five-movie deal with Sony, and Archer & Armstrong is a wonderful door into the Valiant Universe. Pick up A&A, and when the movies hit the big screen, you’ll know your Shadowman from you Solar: Man of the Atom.

What do you think of Archer & Armstrong? Let us know below!