Flick Your Way to Victory With These Skill Based Board Games

The fun in board games often comes in exploring the tension between luck and skill. Board game skill usually means playing a card at the right time or knowing when to make a move that devastates an opponent. Or, it could mean something completely different: pushing discs and other pieces around the table with a flick of the finger. These dexterity games encourage players to develop speed and accuracy while flicking small discs to inflict damage, move to a new location, or otherwise score points. They always draw a crowd and are a great pick for game nights with a drink in the non-flicking hand. 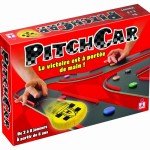 In the French game PitchCar, you set up a big track all around your dining room just like the good old days with Hot Wheels. Players flick their car around a track, bouncing off other cars, guard rails and, in the case of expansions, sweet jumps. If this sounds an awful lot like Mario Kart: the Board Game, that’s how it feels in play. (Homebrew variants like this do this exist, and often pop up at local gaming conventions.) 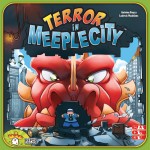 Why watch a giant monster movie when players of Terror in Meeple City can be in one? The board of skyscrapers and other destructible buildings gets set up in the beginning and then players flick buses, claws, and even try to blow building downs to collect the most meeples in their belly. Older versions of this game were titled Rampage, but the similarities to the classic arcade game forced the title change. 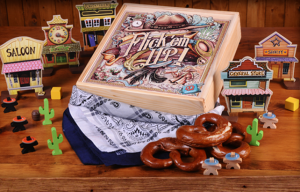 Flick ‘Em Up features a wild western shootout between a gang of outlaws and the agents of the peace trying to bring them in. Players flick discs to move and shoot their opponents, either in a fast playing showdown mode or in one of several scenarios included in the game. All the classics are here, like robbing banks, rescuing damsels, and even executing trick shots to save a compadre from the gallows. Not only that, but expansions add horses and more to the mix. The game was released in a wooden edition initially for that old west feel, but recent game out in a slightly more affordable plastic version. 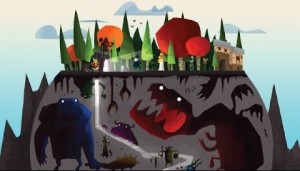 If you’re looking for a way to mix in some D&D to your board game nights, Catacombs puts a new twist on dungeons full of monsters. Players have characters with spells, weapons, and abilities and use different sized discs to represent them. It’s so satisfying launching a fireball into a pack of zombies or bouncing an arrow shot off a column into a bad guy. The company recently held a Kickstarter for a second game in the same style that also doubles as an expansion.

Have you played any of these dexterity games? Tell us about your craziest flick in the comments!