“ The sculpture is already complete within the marble block before I start my work. It is already there, I just have to chisel away the superfluous material.” That’s how the great Michelangelo described his process of turning stone slabs into stunning works of art. That approach clearly worked for him. His impossibly long list of masterpieces includes “The David” and “La Pietà.”

But some of his sculptures involved more than just freeing the work within. They involved putting someone’s remains inside of them. Like his tomb where Florence’s Duke Alessandro de Medici rests. Which caused a problem even a brilliant mind like Michelangelo couldn’t foresee. Alessandro’s remains threatened to destroy the memorial the famed artist built for the Duke’s family.

That was until flesh-eating bacteria came to the tomb’s rescue. 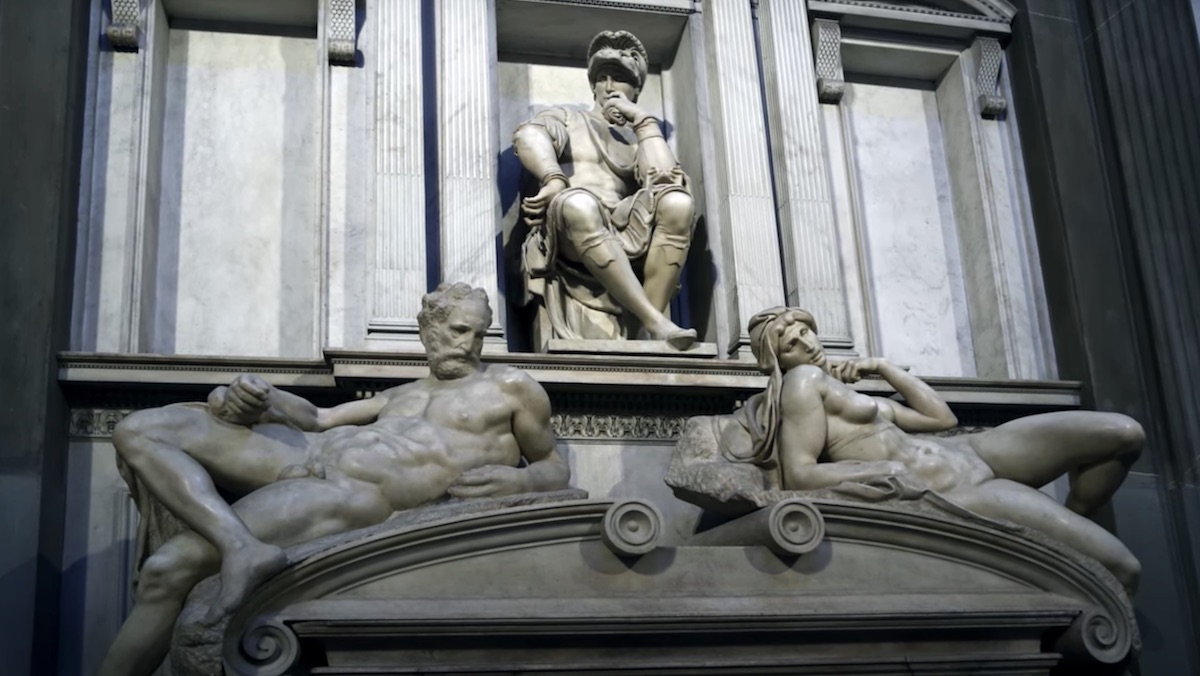 CBS News reports (in a story we first heard about at DesignTAXI) on the ingenious, all-natural way Italian authorities saved one of Michelangelo’s works from decay. Duke Alessandro’s family interred him in the Medici Chapel. He’s buried in the tomb of his father, a piece sculpted by the Renaissance master. In 2019 historians and restorers recognized the tomb was much dirtier than normal. Later that year Italy’s National Research Council identified the culprit responsible: a leaky Duke Alessandro.

It turns out his body had not been properly embalmed. So, a mixture of bodily fluids and compounds of glue and plaster applied to the tomb over the last 500 years was responsible for the stains accumulating on the two statues below Alessandro’s body. Those of Michelangelo’s sculptures of Dusk and Dawn.

The curators of the chapel believed harsh chemicals and abrasives would damage the marble. Instead, they turned to biologist Anna Rosa Sprocati of the Italian National Agency for New Technologies. Forget cleaning the damage. They’d solve the problem at the source. Sprocati and her team searched through more than 1,000 bacteria to use against the issue. That involved plenty of trial and error. Some of the bacteria they tested ate both the stains and marble.

Finally, they settled on Serratia ficaria SH7, a flesh-eating bacteria. Using a microbial gel to apply it, the bacteria did the job both efficiently and thoroughly. The flesh-eating organism finished its, ahem, meal in a single night.

Michelangelo believed his sculptures already existed inside a slab of marble. He merely had to free them. In a strange way, his chisel worked the same way as this flesh-eating bacteria. Each eliminated all the parts the sculpture didn’t need.