Our favorite intrepid band of adventurers have recently crossed over into the Feywild for the second time in their campaign. What, and where, exactly, is the Feywild? What wonders and dangers await Vox Machina here as they search for Fenthras? Will Grog ever say what he and Nala did during his first visit here?

Following are some facts about the Feywild according to official D&D tomes. Consider this a crash course on the Plane of Faerie, answering some of the above questions, and pointing towards possibilities that Vox Machina may encounter. If anything can be expected during their travel here, they and we are in for a ‘faerie’ good time! 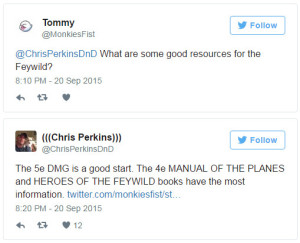 The Feywild is one of two planes that parallel the (Prime) Material Plane, which is ground zero for common D&D adventures. The art below from the 4E D&D Manual of the Planes (pg 11) shows a simple rendition of the planar cosmology as it is known. 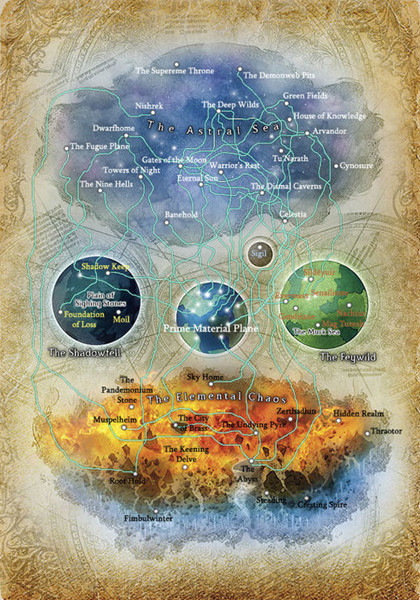 The Feywild and Shadowfell are called echoes of the Material Plane, reflections of that plane, but with their respective properties carried to the extreme. Nature and magic are two governing properties of the Feywild, and are evident in the geography, flora, and fauna of the entire plane. For example, the 5E D&D Dungeon Master’s Guide (pg 49) says the Feywild’s “sky is alight with the faded colors of an ever-setting sun, which never truly sets (or rises for that matter); it remains stationary, dusky and low in the sky.” 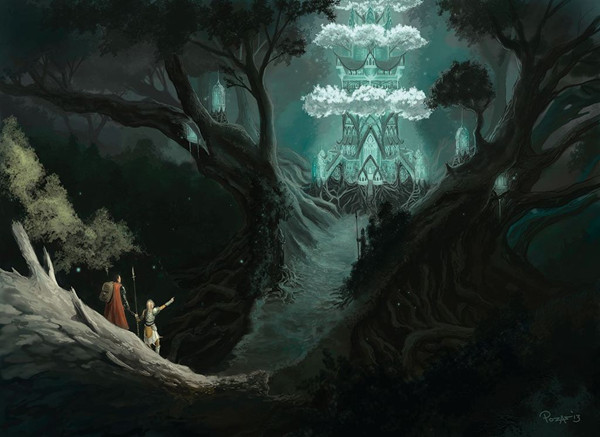 Inhabitants of the Feywild are commonly known as fey creatures, and include fair sylvan beings such as nymphs (Nala), satyrs (Garmeely), and eladrin. Darker Feywild creatures include goblins, giants, ogres, and hags. 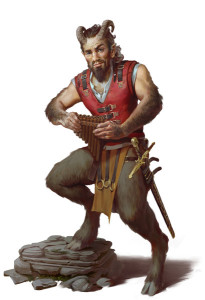 In Chapter Two: The Feywild of The Manual of the Planes sourcebook (pg 32), the intelligent races are grouped into The Summer Fey, The Winter Fey, The Gloaming Fey, The Green Fey, and The Sea Lords. In the 5E D&D DMG (pg 49), Feywild citizens are grouped into only two factions, the Seelie Fey and the Unseelie Fey. The question is whether or not DM Mercer has these factions existing in Tal’Dorei. Vox Machina will soon be entering into Syngorn, the elven city where Vax’ildan and Vex’ahlia are from, and that question may be answered as the story progresses therein.

Due to pervasive and powerful feywild magic, non-fey creatures who leave the Feywild are subject to immediate memory loss, and may not remember any of their time spent in the Feywild.

We know Vox Machina have been in the Feywild once before, and they all seem to have vivid memories of that time. That may mean they all made successful saving throws against memory loss when they left the Feywild the first time, which was played out before the Critical Role show. It could mean DM Mercer may not have put this optional rule into play, they all had their memories restored (magically or otherwise), or it could mean something else entirely. We’ll just have to keep watching to see what happens when Vox Machina leaves the Feywild this time.

Another optional rule of feywild magic is that creatures who spend more than a day within the Feywild may experience a Time Warp when they leave the plane. Time moves quite differently in the Feywild, and a day there could equal anything from minutes to years of time on the Material Plane. Were they affected by time warp the first time they left the Feywild? What happens if they’re affected this time? It’s possible they could return to the Material Plane years after having left. What destruction could the Chroma Conclave wreak in that time? Let’s hope that doesn’t happen!

If you want more info on the Feywild and Planar Cosmology, click over to the official D&D articles Fey and An Elementary Look at the Planes.

As mentioned before, this is just a brief primer on the Feywild, with some thoughts on what could possibly be in store for Vox Machina’s future adventures. Take these references and use them in your own D&D campaigns. And be sure to watch Critical Role on Thursday nights to see how DM Mercer would like to do this!