Costumes bring a character to life at first glimpse on the screen.  From Spike’s jacket in Angel to Inara’s beautiful gowns in Firefly, Shawna Trpcic knows how to do just that; she sculpts the character and creates a mood with fabric, form, and function.  An unconventional, determined, and resourceful person, it’s no wonder that she has become the go-to costume designer of beloved writer/director Joss Whedon’s Firefly, Angel, and Dollhouse, and Much Ado About Nothing. We sat down with this remarkable designer to talk about her work and unique beginnings.

Originally wanting to be a truck-driving mechanic in the army, Shawna didn’t initially believe she could make art her career. Her high school art teacher, Mr. Gil, recognized her talent, and struck a deal with her to put together a couple of portfolios for two art colleges.  If she got accepted, she would go.  Shawna was accepted and received scholarship programs to both, choosing to attend Otis College of Art & Design.

Shawna decided to study fashion, but her start was anything but typical.  “I was just the perfect example of an ugly duckling,” Shawna laughs.  “Everyone else was wearing Chanel, and I was a jeans and t-shirt kind of girl; I pretty much still am.” Sporting her clothes from thrift stores, she would stay after school to learn and draw figures.

This ugly duckling turned out to be a swan all along when she was chosen for Bob Mackie’s costume team for a show called “Cinderella in the 60’s.” He chose a few elite students to be on the team; Shawna was selected because she was the only student in the entire program who drew black models. One of the characters was an African-American princess. Shawna was thrilled for the opportunity, rose to the occasion, and fell in love with creating fine art for the figure.

“You’re creating a character, which is art in itself,” Shawna illuminates, “I thought, ‘This is what I want to do.’”

She worked with AFI students for little to no pay for two years.  SAG-AFTRA actors would teach her how to do her job, recommending she bring a Polaroid camera to keep continuity and an ironing board to press clothes. Word got out about “this crazy wacky designer who can make anything happen with no budget at all,” and Shawna was hired to do the first-ever American pilot of the Might Morphin Power Rangers series. A couple of shows later, she got her first union job as lead costume designer on Firefly. 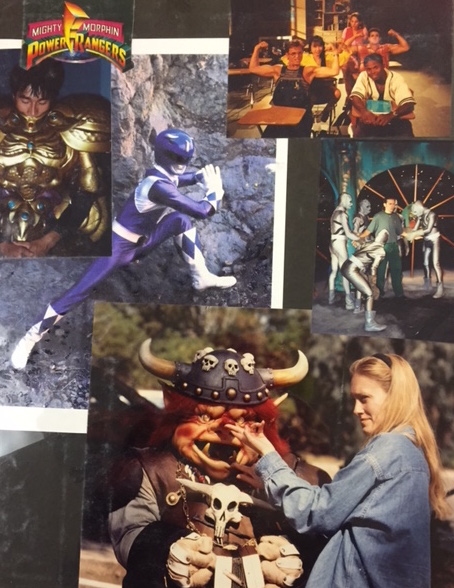 “I was very naïve; I had never heard of Joss Whedon when I started Firefly,” she admits. She describes Joss as a genius, and she would create huge image boards to make sure she was on the same visual page as him.

A board shows the look and feel of the costume design. “For example, say you’re designing a heroine,” she explains, “ and you like characters such as Elektra and Daredevil.  You’d put together pictures of super heroes you like, grit, leather, material to give it the flavor and color.” She then uses the board as her pitch book to sell the costume vision to the director, producer, and showrunner.

Since each episode of Firefly takes place on a separate planet, she would design for a different world every eight days. Shawna worked closely with production designer Carey Meyer and executive producer Tim Minear to design each world’s look, and then the specific characters in those castes. For example, the Mudders in the episode “Jaynestown” were low-caste indentured servants, who sported different attire from the local ruling magistrate.

Shawna also learned how to create costumes for action. She describes how 10 minutes before shooting, the bounty hunter stunt person ripped literally every single part of the costume. She learned to put in stretch panels and seams so that he could do the action required. 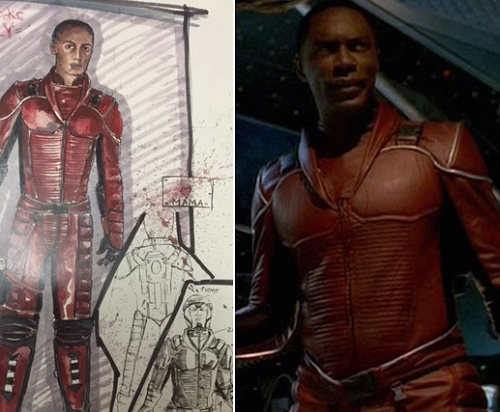 “All Americans are mutts,” she explains, “We don’t want to pigeonhole characters into the cookie cutter version instead of getting into the deep layer of them.” Shawna weaves together interesting, beautiful cross-cultural aspects throughout her sci-fi/fantasy work. To design the Companion Inara’s elegant and iconic outfits, Shawna studied concubines in various races, backgrounds, and countries; Inara was supposed to be a goddess in all of these cultures.

Shawna studied the nuances of what concubines wore as well as what they held back. These women weren’t dressed sexily like Marilyn Monroe; they concealed so that there would be something to discover. “They covered everything and were the most desired and gorgeous creatures on Earth. I wanted to create layers of fabric and mystery around Inara.” For every single one of Inara’s costumes, Shawna created an illustration and made it from scratch, specifically for Morena Baccarin. 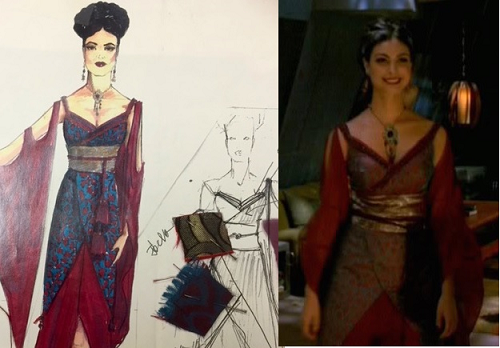 Shawna had a team of 12 women sewing, a full-time dyer, and a full tailor shop. Every 8 days, they collaborated to create 2 or 3 costumes for Inara and other characters on the show. They made Kaylee’s dress in the episode “Shindig” from scratch, sewing and dying every ruffle. In that same episode, Shawna used her own gold wedding dress to costume Inara, and the writers rewrote the script to change Mal’s line from “I think she’s wearing red” to “gold.” The veil became her bodice and skirt, and they dyed silk chiffon for the sleeves to match the dress.

Joss gave Shawna lots of creative freedom, and they worked well together. When Firefly was cancelled, Joss brought her over to do Angel, and she continued to work with him on other projects, including Dr. Horrible’s Sing-Along Blog and Dollhouse.