How Fictional Flying Vehicles in Pop Culture Compare in Size

When Scott Lang jumped on brave Ant-thony’s tiny back we knew how small that flying ant was. Just like we understood the size of the magical car Harry and Ron took to Hogwarts. But what’s bigger: the Avengers Quinjet or the X-Men’s Blackbird? What about two of the most famous flying creatures in fantasy: Game of Thrones’ Drogon or a Fellbeast from The Lord of the Rings? And even if you know those answers (you wonderful nerd), just how big is big? A fantastic new video can help explain. It compares the sizes of famous fictional air vehicles in pop culture, all with some very helpful perspective to help us appreciate their scope.

And every time we can’t believe just how enormous one ship is, there’s a massive floating city to remind us just how much bigger things can always be in fiction.

One of our favorite YouTube creators, Álvaro Gracia Montoya of MetaBallStudios, who recently compared the size of fictional land vehicles, is back with another wonderful video. This time he turned his eyes to skies. His newest lineup highlight the differences between fictional flying machines, animals, and entire cities from movies, books, TV, and video games.

Normally we’re most excited by the biggest machines. But this time we also got a huge kick out of one of the smaller ones. Can you imagine how adorable Chip ‘n Dale would look in their little Ranger Plane? Strangely, it would probably have a better chance of taking down some of the biggest ships. You might have more success sending in the Rescue Rangers to covertly destroy Hydra’s Valkyrie. It could destroy it from within, as opposed to sending another leviathan against it. That is unless you sent the HMS Leviathan to fight it. Talk about being aptly named. 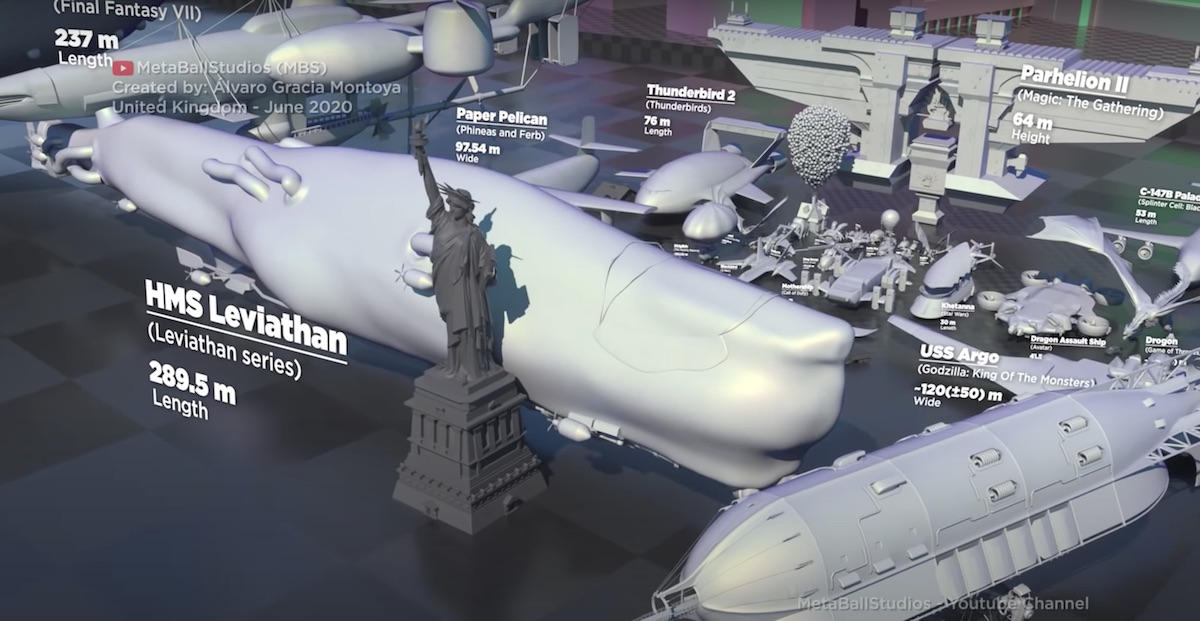 But if you wanted to bring all of these ships together for the greatest fictional airshow ever imagined, you’d send them all to Cloud City from The Empire Strikes Back. No wonder the Millennium Falcon was able to escape Darth Vader. That place is huge.

I mean, we knew it was big before. But we didn’t know how big was “big.” Turns out that place is big enough for dragons and fellbeasts.