We often read, watch, and listen to stories to have fun. To be swept away into another place. Sometimes, that world bears a striking similarity to our own with an infusion of fantasy that is influenced by reality. The Fear Street trilogy accomplishes this with a universe that is a mixture of the fantastical and the familiar. It blends fictional tales with real-life oppression and does it all through an intriguing curse. After completing the series, its clear that the curse is an analogy for oppression stemming from racial and gender inequity, redlining, and other weightier issues of white supremacy.

In Fear Street Part 1: 1994, we learn about two adjoining towns: Shadyside and Sunnyvale. Sunnyvale is a suburb with little to no crime; everyone is financially well off, primarily white, and living their best life. The opposite of this quaint suburban dream is Shadyside, a place rife with poverty, crime, and years of recurring killing sprees. The similarities between Sunnyvale and Shadyside are no different than any city or town in the world. There is an area of affluence that may have a few Black people or people of color living there in juxtaposition to an impoverished area, usually separated through bridges, highways, or interstates to keep the poor and wealthy divided. The latter has mostly Black people and people of color but includes downtrodden white people who rarely get to “the other side.”

The rare exception is Sam, the ex-girlfriend of protagonist Deena Johnson, who lives in Shadyside. Sam is a white girl who was able to get out of Shadyside and move to Sunnyvale. But unfortunately, with the curse, she is still seen as a Shadysider. Perhaps because she never fully assimilated into Sunnyvale by rejecting her sexuality and adhering to a heternormative role to appease her mother. Upward mobility is limited, and the more aspects of one’s identity—physical or sexual—that fall from the norm, the fewer options one has.

Similar to redlining, the “undesirables” are kept out of certain areas, yet police—the sword of white supremacy—have authority over Sunnyvale and Shadyside, a community they harm and have an active bias against. When Deena and Sam are leaving Sheriff Nick Goode’s house in Sunnyvale, his neighbors gawk at them. Any person from a poor neighborhood, especially if they are not white, knows those looks.

Sunnyvalers exhibit the same sentiments towards Shadysiders that wealthy and upwardly mobile people do towards the poor in real life. There is little to no delineation between indigence, discrimination, targeted harassment, and crime. They believe the poor and those who commit crimes exist because something is inherently wrong with them. Otherwise, they would be successful. Shadysiders are frequently objectified, like when Peter grabs Deena and forces a hug on her. It demonstrates the egotistical nature of Sunnyvalers and white supremacy to believe they have dominion over someone else. Those outside privilege circles exist for their entertainment and amusement.

There is also the way Kapinski treats Deena and Sam. He leans into his head-patting condescension and demand they “find their boyfriends” since they need to “relax.” Incidents like this a large part of what makes the Fear Street trilogy so appealing. We see our circumstances reflected at us in this fictional world where there is a single source for the inequity, a curse that can solved. If only white supremacy were as easily destroyed.

In Fear Street Part 2: 1978, the divide between the have and have nots is still clear, with both Sunnyvalers and Shadysiders attending Camp Nightwing for the summer. Sunnyvalers run the camp for the most part, with some older teens from Shadyside as counselors. The divide is present throughout the Color Wars between them. From the apparent political color reference of red (Sunnyvale, good, Republican) vs. blue (Shadyside, evil, Democrat) to the way each team of children treats their “hostages,” it’s clear who sees the other’s humanity and who does not.

In this film, we get confirmation that this curse is for Shadysiders alone. Tommy, a seemingly ordinary Shadysider, suddenly becomes a murderous killer. Yet, he does not target any kids from Sunnyvale. Even this bears similarities to white supremacy and the interconnected systems of subjugation. Often when a person snaps from years of discrimination, marginalization, and exploitation, the victims are people in their own community.

We also see Sheriff Nick Goode, Sunnyvaler, as a young camp counselor who befriends and pursues Ziggy, a Shadysider. Initially, he seems to care about Ziggy; however, generations of Sunnyvalers looking down on Shadysiders doesn’t simply fade. He appears to be an ally, sympathetic to Ziggy, but he doesn’t believe the curse caused Tom’s rampage. Similar again to how people espouse platitudes for marginalized communities while simultaneously believing they are just bad people. And when they “snap,”  the privileged always see the behavior as inexcusable because they lack understanding of the severity and toll oppression takes on a community.

The Rewriting of History and Pervasive Lies

Fear Street Part 3: 1666 gives us the full backstory of Sarah Fier (known as the witch) and the curse. Unsurprisingly, the witch is a girl who lives in a puritanical time that frowns on sexuality and deviations from traditional heteronormative roles. But Fier wasn’t a witch. She was simply an unfortunate scapegoat because of her sexual attraction to girls. She’s on the outskirts of acceptability to the point that a pervasive lie about her being a witch lasts for hundreds of years with current Shadysiders attributing their curse to her. The narrative spun by oppressors is rampant in Shadyside, whether they believe in the curse of not. The people who don’t believe are unknowingly doing the work of the oppressor. After all, you can’t combat a problem you feel doesn’t exist.

Part 3 ultimately reveals that the villain is Solomon Goode, ancestor of Nick Goode and a white man, of course, who pursues power through a curse that sacrifices others for personal power and social gain. The Goode family has several generations of sheriffs, politicians, and financial growth. (Has anyone ever seen a sheriff’s house that looks like Nick Goode’s in real life?!) This not only benefits the Goode family but all of Sunnyvale, whether they realize it or not, because they have no crime and wealth. 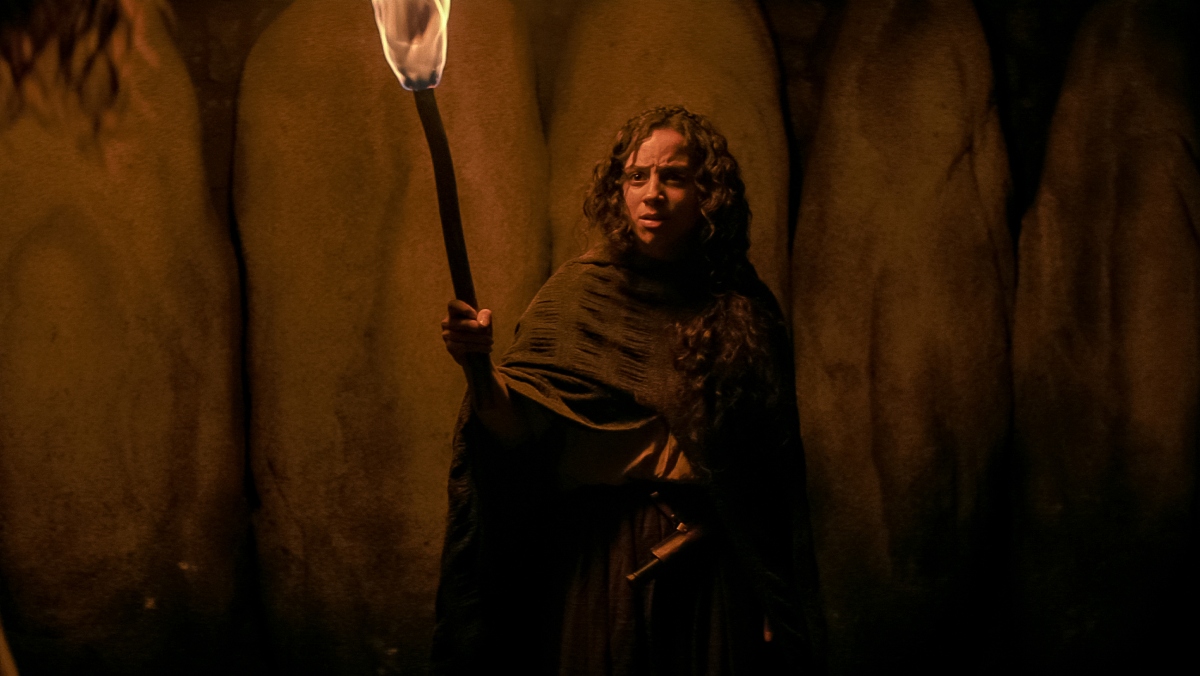 White people, consciously or not, are the beneficiaries of a system that harms others. Poor, marginalized communities are subject to environmental harm, like the Flint, Michigan, water crisis, racial profiling, subpar education systems, and many other issues. The further down the ladder you are, the less likely you will succeed, unless you are one of the chosen few who do to provide “evidence” that white supremacy does not exist.

The village makes brutal decision to hang Sarah Fier, evoking her rage that will live on. But her words were not meant to harm Shadysiders, but to exist as long as the Goode curse remained in tact. It’s why the curse targets individuals who have seen the witch differently. It affects only one killer on a rampage. But when someone sees Sarah Fier, the truth may come out. So all previous killers are forced to rise and kill that person. That was the case with Ziggy in 1978 and Sam in 1994. This silencing and lies are similar to the way society, then and now, harms marginalized people. Then, those with privilege wonder how someone “just snaps.” It speaks to the superficial disingenuousness of the curse and real-life white supremacy.

Yet, change came from Deena and Josh, the younger generation of Shadysiders. They fought to change their world for the better for themselves and future generations. Similarly, the most vocal against oppressive systems in our society are youth. They challenge racism, sexism, ableism, the archaic, subpar healthcare system, laws, workplace environment, and much more.

In the Fear Street films, there was a curse that explained the horrors of Shadyside and the joys of Sunnyvale. It came from a white man named, hilariously enough, Goode, and changed the lives and history of many people. This is the same for us: a curse originating from white men that affects generations of people. It’s past time we all said it, recognized it, and combatted it too.