Fans of the Fallout series had our minds nuked in late April with the announcement of Fallout: Wasteland Warfare, “the first tabletop miniatures game based on the Fallout universe”. Geek & Sundry is proud to bring you exclusive details from official Vault-Tec data files on more content we can expect in FWW, along with a look at two as yet unrevealed miniatures!

When FWW launches to retail stores in November, the base game will be set in the Commonwealth, the area of and around Boston, Massachusetts, as it was made known in the hugely popular Fallout 4 video game developed by Bethesda Game Studios and published by Bethesda Softworks.

“We’re drawing on the breadth of content in Fallout 4 first (since there’s so much)”, said Modiphius’ Publishing Director Chris Birch. “The campaigns will feature a lot of well-known locations from Fallout 4”, he added, with more locations scheduled to be included in monthly game update packs.

As those game updates grow FWW, so will the locations available for play, eventually growing beyond the Commonwealth of Fallout 4 to include famous locations in the previous Fallout video games. Fallout 3 locations will be the first to follow, and “we have access to 1 and 2 as well but you’ll see a gradual roll out of factions, characters and expansions”, said Birch. “Fallout 3 and 4 will keep us pretty busy but we’re not forgetting about the others!” 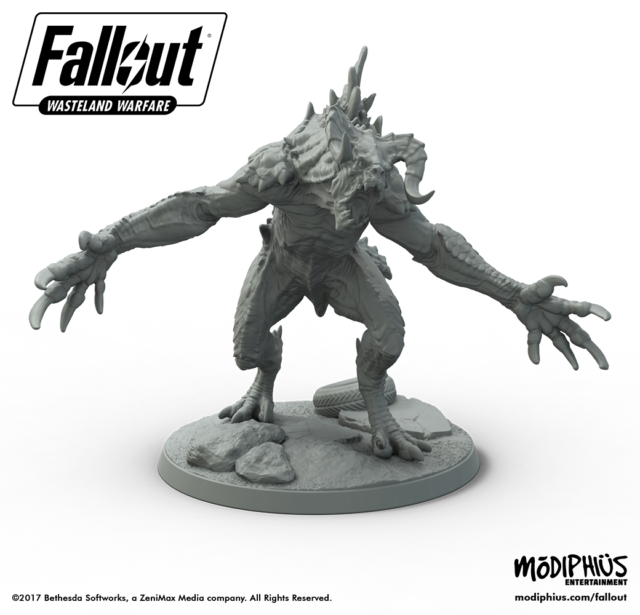 Fallout: Wasteland Warfare will also closely follow the same factions as Fallout 4, with three playable factions at launch: Survivors, Super Mutants, and Brotherhood of Steel. “The Survivors consist of pretty much your settlement in Sanctuary Hills in Fallout 4 including Sturgess [sic], Preston Garvey, Ronnie, Mama Murphy, Piper and other allied groups,“ said Birch, “but they could be any group of survivors.”

Birch added that expansions will add more factions, including the Institute, Raiders, and everyone’s favorite, the Minutemen. “We’re planning a survey imminently to check which factions fans are really wanting first as that will help us tailor the schedule around the community.”

Of course, with those locations come the famous Fallout 4 characters we all know and love. The game will include male and female miniatures of the Lone Survivor at launch, with expected others such as Preston Garvey, Sturges, and Codsworth (Mr. Handy) from the Sanctuary Hills settlement. Birch says they will be surveying the Fallout community for their favorite characters to be added in the future, and that the list of obvious ones they’re currently working on includes Paladin Dance, Elder Maxson, Lancer-Captain Kells, Knight-Captain Cade, Dr. Zimmer & Armitage, Allie Filmore, Alana Secord, Curie (Miss Nanny), Boomer, Ack Ack, Sinjin, Hancock, X6-88 (Courser), and Strong. 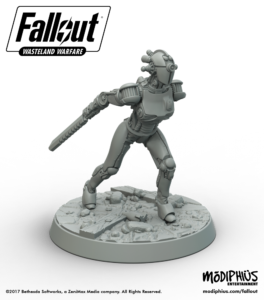 Fallout: Wasteland Warfare will have four play modes: standard (head-to-head) play, a narrative campaign arc, solo play against AI, and co-op play against AI. Standard, solo, and co-op play will have players choosing a faction force according to a Caps total, or based on a pre-made scenario. Caps are also used to buy more characters to fill out your crew, according to Birch, along with “equipment and weapon upgrades, consumables, settlement resources (which provide bonuses during your game) and more.”

The in game AI works by way of playing cards with “themed tactical responses and events based on specific factions or creatures,” said Birch. Upgrade packs will include more cards that function as faction-specific AI, “so no matter which sets you have, you’ll always have some enemies to play against on your own.”

The narrative play concept aims “to have a more story driven series of scenarios,” said Birch. “In the narrative missions what you achieve will have an effect on the next mission, a player’s forces will gradually increase in size and resources, you’ll get access to new options and so on.”

While it isn’t exactly the official Fallout tabletop RPG we want, Birch says “you can just take 3 or 4 characters and take them on a narrative based mission in the wasteland [sic] vs random creatures or an AI force so I think it will scratch the itch of a lot of people looking for small or large scale gaming in the Wasteland.” 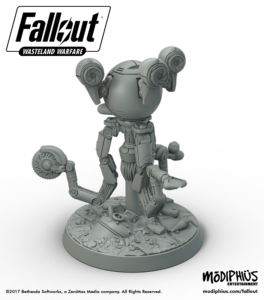 Modiphius is working hard on having the base game fully set up for launch, but also already planning ahead for the future of the game. A huge Campaign expansion is being arranged “which introduces full advanced AI rules, building your crew from scratch, settlement building, and much more,” said Birch.

“There will be cards that introduce faction specific quests that once completed lead to another quest and this can give cool side objectives in missions that can really help your crew,” said Birch. “We’re looking at armour, weapons, chems, equipment upgrades, as well as consumables like grenades. You’ll be able to get better gear through the different expansions (including card decks or unit packs) so you can outfit your growing force.”

Fallout: Wasteland Warfare is set for a November launch date, and will be available for pre-order “in the summer once Bethesda have signed off on the game and launch sets,” Birch said. “We’re aiming to launch in retail in November with the game first available at Essen Spiele.”

Base game and update pack prices are still being worked out, with Birch stating they are “obviously trying to get the best price for everyone.” Be sure to follow Chris Birch (@Modiphius), @Fallout, and @BethesdaStudios ‏for live Fallout: Wasteland Warfare updates!

On a scale of one radroach to Preston Garvey with word about a new settlement that needs your help, how excited are you for Fallout: Wasteland Warfare? Comment below!