Explore the Wonders of Drafting in MAGIC: THE GATHERING ARENA - Nerdist

Explore the Wonders of Drafting in MAGIC: THE GATHERING ARENA

Curious about Magic: The Gathering? Check out our show Spellslingers, where Day[9] faces off against fantastic guests, with new episodes every week!

Drafting in Magic: The Gathering is one of the most fun experiences you can have playing Magic. In groups of eight, players open a pack and take a card, passing the remaining cards to the left or right. After three packs, players build a 40-card deck with cards they drafted and basic land. Drafting gets players familiar with new sets and allows cards to see play that would never make it in constructed formats. Besides that, it’s just fun. The most paper-like of digital Magic drafting experiences comes in Wizards of the Coast’s Magic: The Gathering Arena, now in closed beta.

Currently, drafting in Arena has you versus seven computer-controlled drafters, so as to start drafts immediately. (Actual matches are against real opponents.) It remains to be seen whether drafting with eight actual online players is coming, or if AI drafting is a permanent part of the experience. Be that as it may, Quick Drafting in Arena is fast and fun. 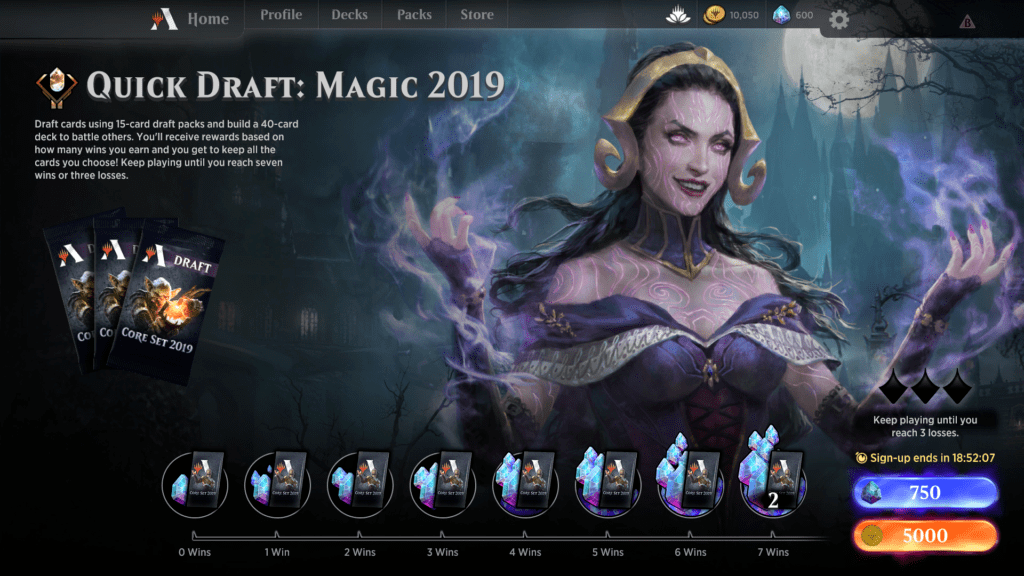 Arena has a choice between Quick Drafts and Competitive Drafts, each with different price points, difficulty level and prize payouts. Quick Drafts cost 5,000 Gold or 750 Gems. Gold is earned through daily quests, and reaching 5,000 only takes a few days of play. Gems are sometimes rewards in tournaments, but most often must be purchased with real money; 750 gems are $4.99, meaning a quick draft costs five bucks, quite a discount from a paper draft event’s $12-15 cost. Competitive drafts cost 1500 gems only, or $10. 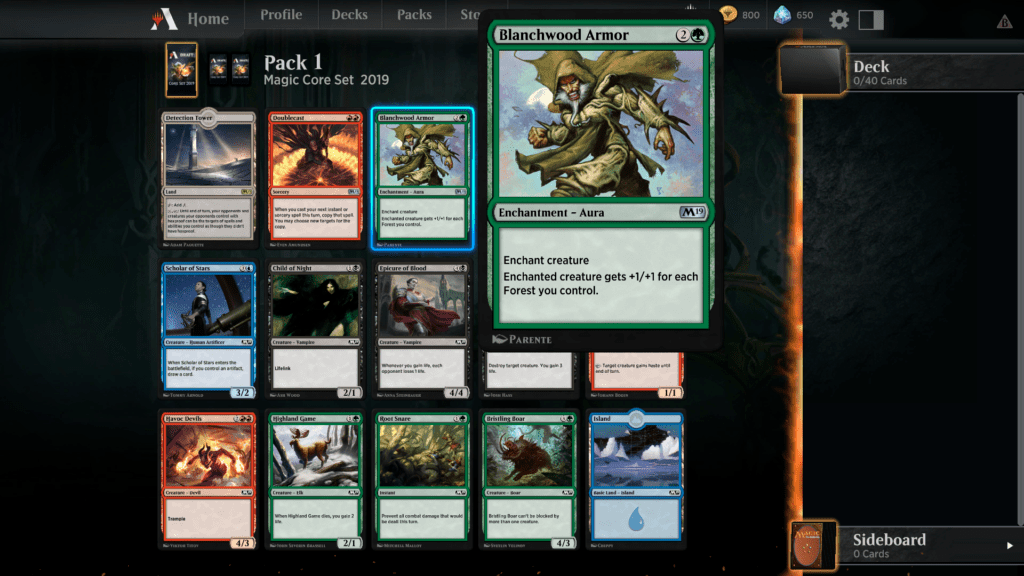 Once you launch the draft, you’re taken to a screen with an opened booster pack and the fifteen cards displayed in order of rarity. It’s not always correct to take the rare or mythic rare; in my case, I saw an opportunity to play a strong green deck, and chose the powerful Blanchwood Armor. 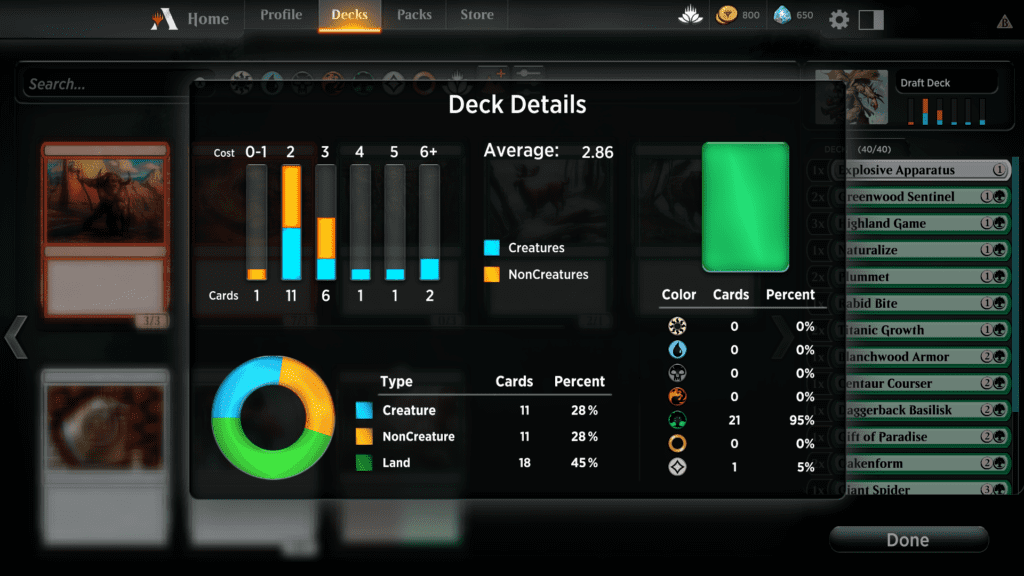 In fact, I ended up with a good mono-green deck after I was through drafting the three packs. After building your 40-card deck, Arena offers you statistics to make sure your deck has the right number of cards for each cost, the right mana ratio and a solid quantity of creatures. 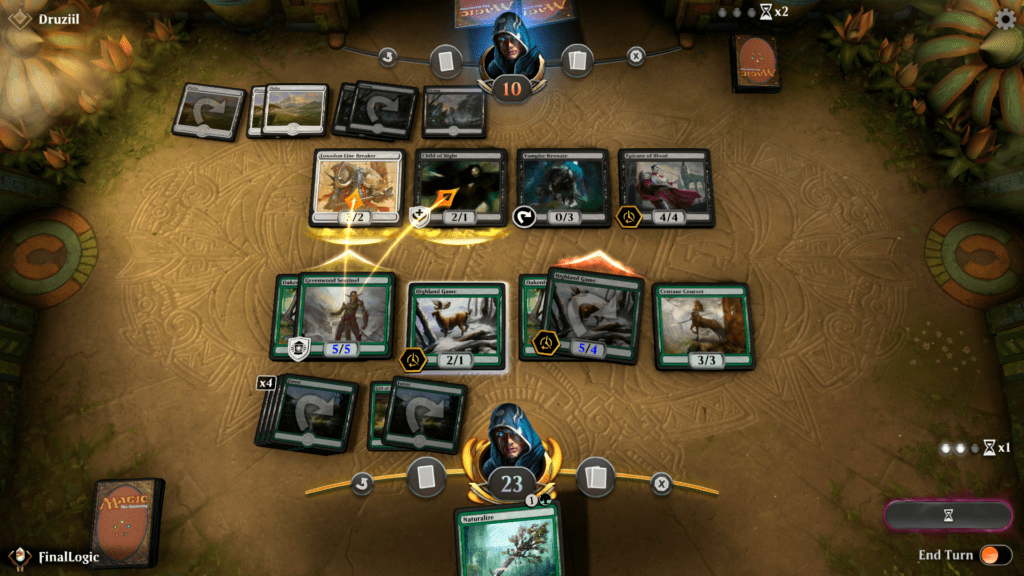 Gameplay is just like the Magic: The Gathering you’re used to in real life; I was matched up against similarly skilled opponents based on my draft ranking. My opponent this game had a white-black, or Orzhov deck. 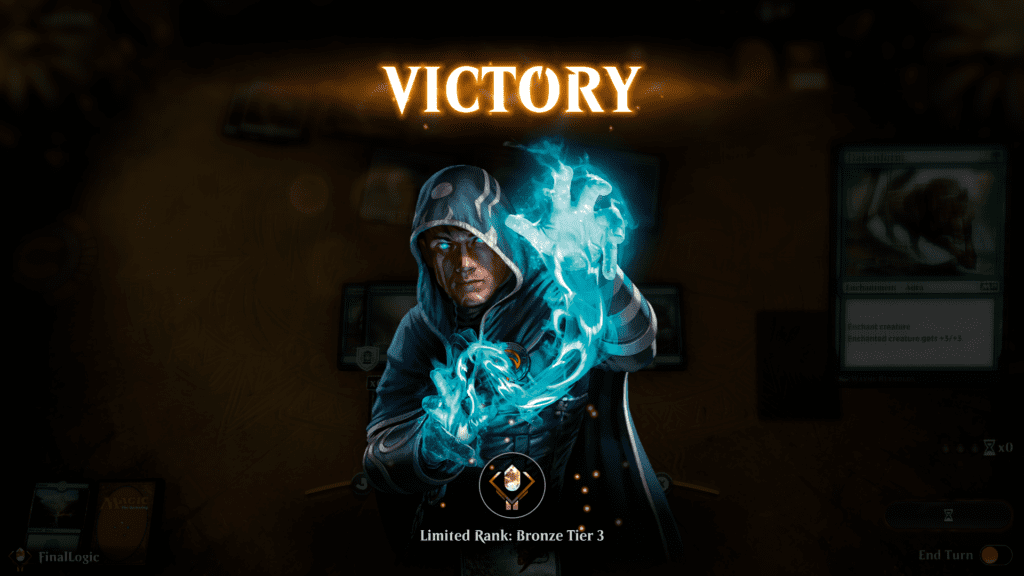 I managed to finish off my Orzhov opponent; the draft ends once you reach seven wins or three losses, whichever comes first, and your prize package is based on that win total.

Magic: The Gathering Arena is currently in closed beta; sign up now for your beta key.

What color is your deck? Tell us in the comments!

Image Credits: Magic: The Gathering Arena/Wizards of the Coast

Magic: The Gathering’s Kaladesh Preview Card: What did You...