Expand, Build, and Conquer Your Way to Victory with Towers of Conquest - Nerdist

Expand, Build, and Conquer Your Way to Victory with Towers of Conquest

Towers of Conquest is a fully-funded Kickstarter game project brought to you by BC Games. It’s a fantasy tabletop board game that strikingly detailed miniatures, intense strategy, resource collecting, and upgradable structures. In this 4X game (where players expand, explore, exploit (resource) and exterminate (opponents), you’re racing your opponent to 30 Conquest Points. If you want a rundown on the basics, Becca puts it together for you in this How to Play video:

What happens when an engineer combines his love of strategy and empire building with his wife’s love of resource collecting and his son’s love of battle? You get a game that just about everyone around the table can enjoy. You start off with a settlement and two pathfinders. You’re looking to expand, build, and conquer your way to victory. Send your pathfinders out to fight and gather resources you need to build your settlement up so you can bring out bigger and badder troops.

The rules are fairly simple, so it’s quick to learn. They even have a handy-dandy cheat sheet which keeps the game moving without having to consult the rulebook. The replay value comes in how you deal with your strategy: Are you going for the obliteration of the enemy’s troops right away or will you build your tower as quickly as possible? Don’t be surprised if you end each game thinking up new strategies to try the next time. 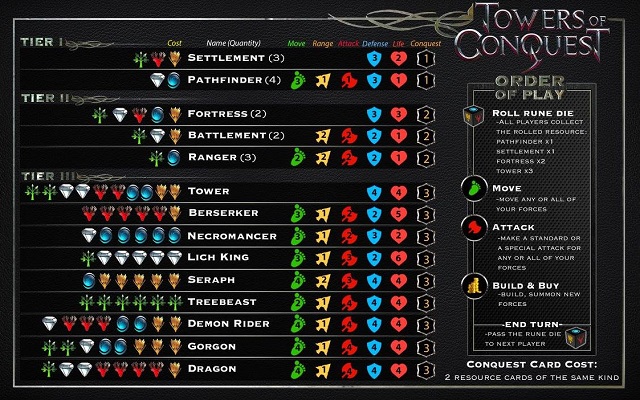 There are seven interchangeable boards, so you aren’t stuck with the same board game after game. You shuffle them into different configurations every time.  You don’t always have to play to 30 Conquest Points. If you want, play until there is only one player left. The choice is up to you.

At the beginning of each player’s turn, they will roll the Rune Die to see what resource is being collected. If you happen to have a troop or settlement on that resource type, you get it. The bigger your settlement, the more of that resource you get.

After that, your troops move (or stay put if you like where they are), attack anyone in range, or use a special ability. Attacking and defending is super easy. You grab dice equal to the strength of the troop you are using. Defenders need to roll one success for each attacker’s success to block the attack. You end your turn by buying more troops or upgrades to your settlements.

The minis in this game are beautiful. There are a whopping 67 miniatures in the core box. Each player gets four pathfinders, three rangers, and three settlements, plus all the upgrades to their settlements. There are seven Ultimate Champions to choose from when the time comes to summon one. Don’t worry about losing track of who’s mini is who’s. Each faction will be a different color. Of course, you could paint them if you’d like.

Your tower is an amazing feat of engineering in and of itself. All four pieces fit together nicely. The settlement looks good from all angles. Fortress walls fit beautifully around it, with the battlements and tower fitting on top wonderfully. All four towers are distinctly different from one another. You can really tell the attention to detail that went into all the components of this game.

Conquest points are earned by building and upgrading settlements, summoning troops, and slaying your opponent’s troops. If you slay a troop, not only do you gain the points for it, but your opponent loses them. This means points are constantly shifting throughout the game. Get to 30 points first to win.

If you want to see how the game is played, check it out in action with our Game the Game playthrough:

Are you ready to control the towers? Check out Towers of Conquest on Kickstarter before it ends on June 2nd!