Everything's Better, Down Where it's Wetter in the Board Game Abyss - Nerdist

Everything’s Better, Down Where it’s Wetter in the Board Game Abyss

Like Game of Thrones? What about the concept of Atlantis? Have you ever thought about smashing those two together. Most likely not. But now I bet you are curious as to how that would look. Thankfully Bruno Cathala and Charles Chevallier have already done the work for you in the fantastic board game, Abyss.

In Abyss, you are a lord or lady in league against other players for the recently empty throne to become the ruler of the Abyss. Ally yourself with the varying factions, send out your envoys to discover new resources or fight monsters, and finally take control and explore the many kingdoms of Abyss.

Abyss plunges you into a world set on the ocean’s floor where you immediately become immersed in political warfare against your friends. The game plays between 2-4 players, with each player adding a new variable of difficulty without adding too much play time to make the game feel lengthy or boring. There are three phases per turn; the first being to “Plot the Court” where you may spend pearls to bring a new Lord to the Court. Next is to take one of three actions: “Exploring the Depths” where you try to find new allies or fight monsters, “Request Support from the Council” where you can add more resource cards to your hand, or “Recruiting a Lord” from a Lord associated with one of the five main factions outside of the Masters. The last thing a player must do is Control Locations, which is only applicable after acquiring the correct resources. 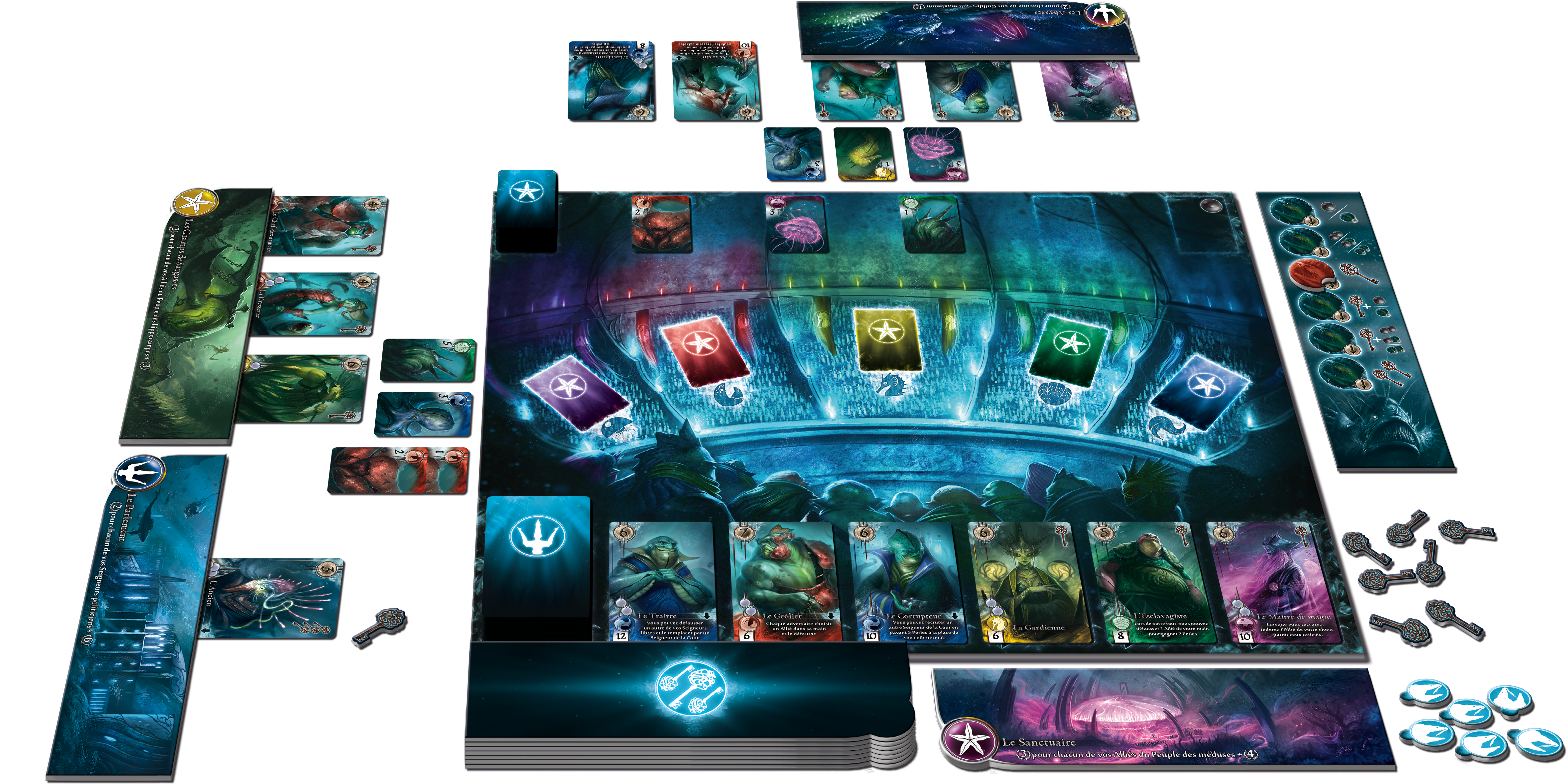 At first glance at the board and cards, you’d be remiss to not notice Xavier Collette’s fantastic digital art, detailing the resources you need to play the game. The first of which is the deck of Lords. Over-sized cards that play at the bottom of The Court’s board, the Lords are the most influential and game changing cards, with almost each Lord bringing a boon or condition that alters the game in your favor. 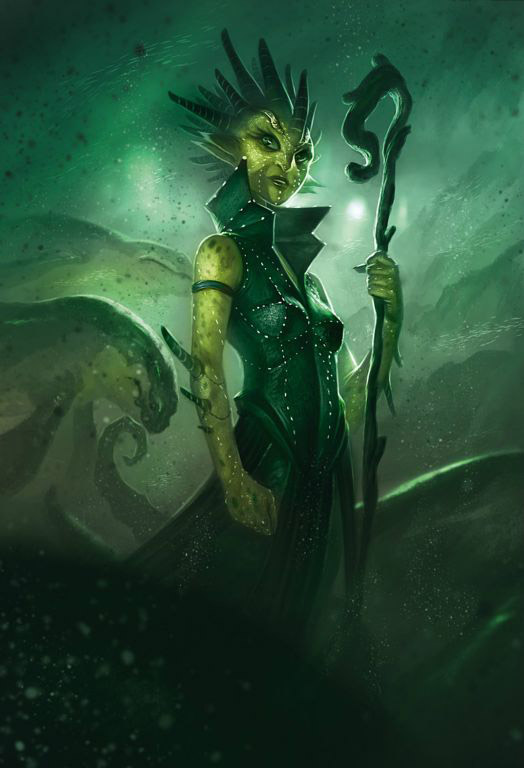 Farmers bare no boons, but rather have the highest amount of influence. Politicians help players manage which Lords are in the Court by swapping them out with a Lords you are currently allied with, drawing new Lords, or reducing the amount of resources you need to purchase your next Lord. Soldiers apply conditions on your opponents, assaulting their resources, disabling the boons of an opposing Lords, or suspending their resource traffic. The Magi are my favorite. They allow you to break almost every rule the instructions have told you to follow, including taking extra turns, taking extra resources from The Council, and altering the stack of Location tiles or Kingdoms of Abyss. With greedy hearts and minds, the Merchants will make sure you carry the most Pearls in your pocket, which are used for bidding and purchasing different allies from the Council. And finally, we have the most elusive and powerful of the of the Lords and their factions, The Masters. With high risk comes high reward, the Masters host the most influence and boons that will surely secure your position on the throne.

Above the Court and in the middle of the board is the Council; a set of resources divided by the alliances of their Lords’ factions. Each set is used to purchase their respective Lords, or one of each faction can be combined to purchase a Master. The Council is created from the discovered cards during Exploration of the Depths.

Send your emissaries out to Explore the Depth to find new allies to fill the Council or fight monster to seek treasure. As each location is explored, you turn cards from the Exploration deck and fill the top of the boards from left to right. Each card turned that you do not want becomes accessible to the other Lords. If that card is purchased, you continue exploring until you either reach the end of the exploration track and gain a pearl, or you take a card you want. For each card purchased by another player, the cost of the next card during that turn is increased by one pearl. In the event you discover a monster, you can either fight the beast and claim the reward on the monster track, or avoid the beast and move the reward on the monster track to greater treasures. 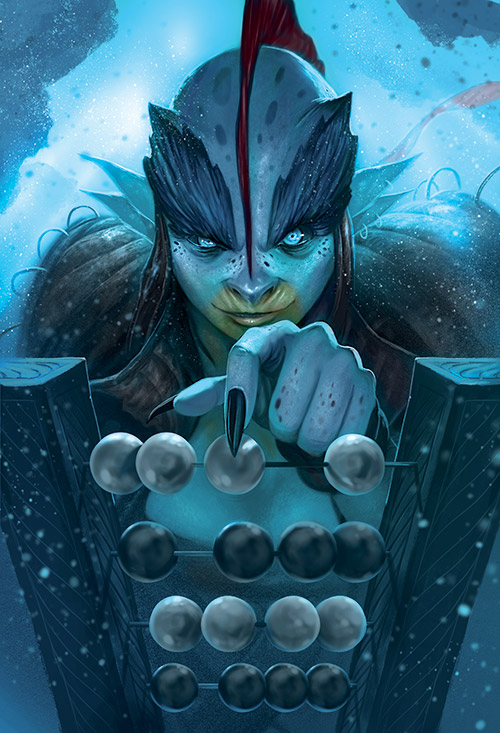 The final moving mechanic is the Locations or Kingdoms that you can control. Each Location has its own game altering rule, which becomes active upon acquiring your third key. After acquiring said location, you must assign an allied Lord to take control of and manage your location, expanding your influence over Abyss. When the game is finished, you add up all your victory points and pearls to determine who becomes the new Ruler of Abyss.

With alternating strategies and constantly changing variable, Abyss’ replay value is vast; for the best competitive games are not great because of their mechanics, but rather how players choose to use them. If you are looking for a game new game to dive into without sinking too deep; Abyss will not leave you drifting for something new anytime soon.