by Amy Ratcliffe
When Disney purchased Lucasfilm in 2012, I was excited about the prospect of more Star Wars films, obviously, but I couldn’t stop thinking about what the acquisition meant for Disney Parks. Star Wars already had a presence in the parks with Star Tours: The Adventures Continue, Jedi Training Academy, and special events, but oh, the potential—especially after seeing the level of immersion Imagineering nailed with Cars Land at Disney’s California Adventure. And we’re getting more with Star Wars: Galaxy’s Edge.

My dreams about more Star Wars at Disney parks came true at D23 Expo in 2015 when Disney CEO Bob Iger announced Star Wars-themed lands were going to happen. Here’s everything we know about Star Wars: Galaxy’s Edge so far: 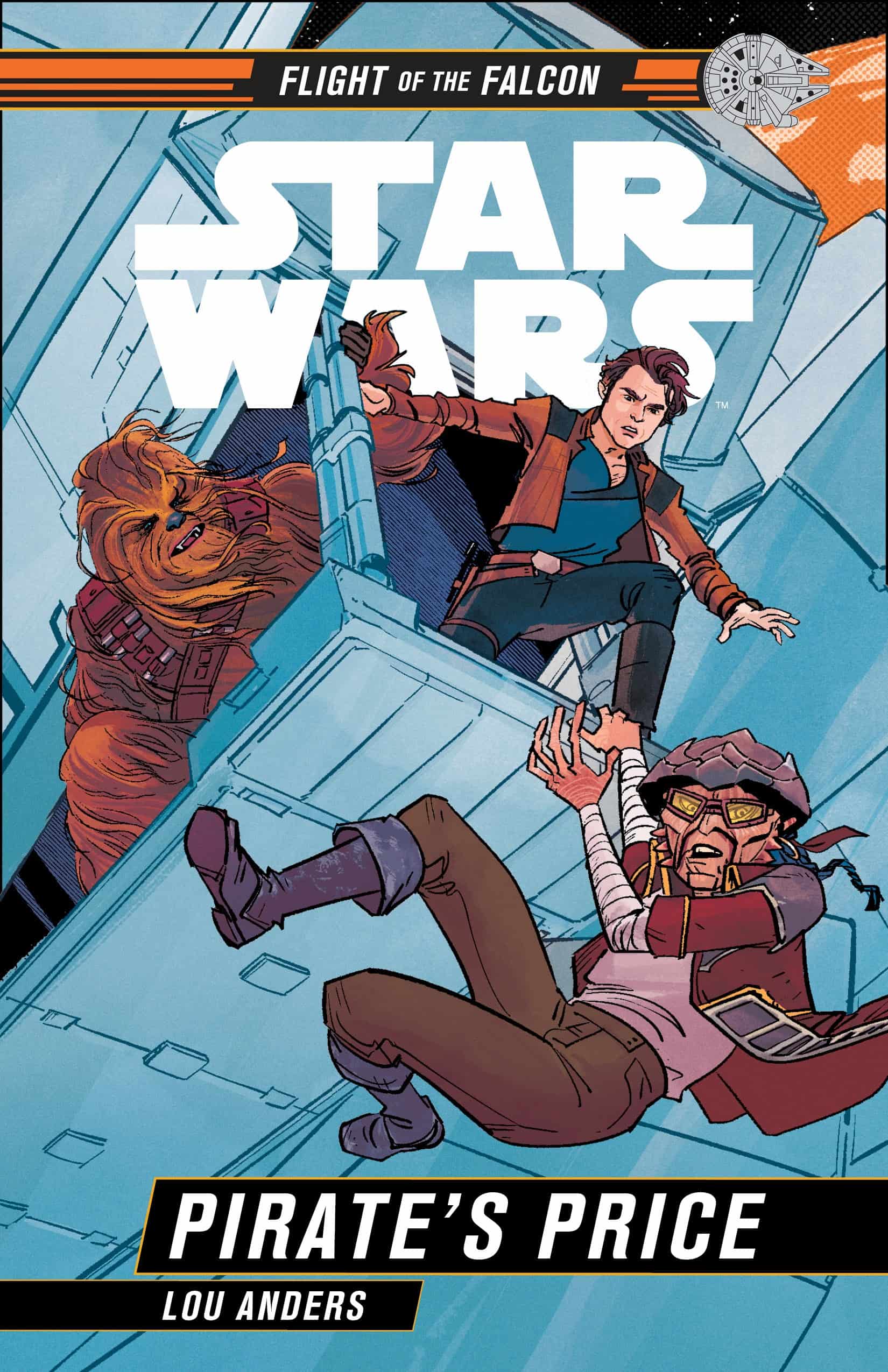 A new book from Disney-Lucasfilm Press is partially set in Batuu and gives us some hints about what to expect in Star Wars: Galaxy’s Edge. I just read Pirate’s Price by Lou Anders. The story stars Hondo Ohnaka from Star Wars: The Clone Wars and Star Wars Rebels; the wily Weequay pirate has set up a company of his own in Batuu, Ohnaka Transport Solutions. In the story, Bazine Netal (you know, the sneaky spy who gave up Finn and Rey at Maz Kanata’s castle in The Force Awakens) has come to Batuu get the Millennium Falcon from Hondo. He has the iconic ship because Chewbacca needed a specific component for a repair, and the Wookiee turned to Hondo for help.

Chewie was with Rey when he brought the Falcon to Hondo after the events of The Last Jedi…and the ship has some feathered passengers in the form porgs. I’m sorry, porgies, according to Hondo. Hondo’s even named a couple of them: Snappy and Puffy. I think this means the Millennium Falcon attraction in Galaxy’s Edge will come with a bunch o’ porgs–maybe they’ll be in the ride queue or even in the cockpit. It would make sense for Disney to include the adorable critters if they can.

And as far as set up for the Millennium Falcon: Smuggler’s Run attraction, the book states Hondo is looking for a crew to use the Falcon for business. He puts a flyer up in Batuu’s cantina that says: “Flight crews wanted. No training necessary. Fair pay, great experience. Discretion a must. Inquire at Ohnaka Transport Solutions in the Spaceport.”

Also worth noting, Hondo orders a few drinks in Oga’s Cantina that we could end up seeing on the menu: Fuzzy Tauntaun, Gamorrean Grog, and Carbon Freeze.

Which locations are getting the Star Wars addition? Star Wars: Galaxy’s Edge are coming to Disneyland in Anaheim, California and Disney’s Hollywood Studios in Orlando, Florida. Both locations will be 14 acres.

When will Galaxy’s Edge open? Galaxy’s Edge will open at Disneyland in summer 2019 (June is looking likely); it will open at Hollywood Studios in late fall 2019. Star Wars: Galaxy’s Edge is centered on Batuu, specifically the village of Black Spire Outpost. It’s a bustling sort of place surrounded by giant petrified trees. As the name of the land hints at, this a location at the edge of the galaxy; Batuu’s in the Outer Rim, not too far from the Unknown Region. It’s a place where smugglers, merchants, bounty hunters, Resistance, and First Order members run into each other. Though it’s in the middle of no and where, Batuu has become more popular thanks to updated hyperspace routes (even the Star Tours attraction stops by Batuu).

As for the time setting, it’s sequel trilogy era. The Resistance and the First Order will each have territory in Black Spire. Guests will encounter familiar faces like Nien Nunb, Hondo Ohnaka, Chewbacca, and BB-8, among others.

The goal is for the areas to be immersive a la Cars Land or Universal’s Wizarding World. You’ll walk in and forget you’re in a Disney Park. The restaurants and entertainment will fit within the narrative, with cast members staying in-universe. Only local inhabitants will serve you food and sell you merchandise. You can visit a cantina (not the cantina you’re thinking of, sadly) and order themed food and beverages. Aliens, droids, and humanoids will roam the streets. Galaxy’s Edge will feature two E-ticket, a.k.a. Space Mountain level, attractions: Millennium Falcon: Smuggler’s Run, a daring adventure aboard the infamous ship, and Star Wars: Rise of the Resistance, an elaborate escape from the First Order.

The Millennium Falcon attraction will put guests in control of the iconic Star Wars ship, and will have different outcomes depending on how that piloting goes. How guests perform in the ride will affect their rep in the Galaxy’s Edge–that’s part of experiences throughout the entire land. Your decisions and actions in Black Spire will follow you around. Rise of the Resistance will be set on a First Order Star Destroyer. Guests will get up close and personal with stormtroopers and their blasters. The show building is massive, housing massive AT-AT vehicles, which you can see in the below ride previews: Star Wars: Galaxy’s Edge will feature unique merchandise with a handcrafted feel. For example, one of the shops is a toy stall run by a Toydarian. The toys, which look like they’re plushies, are stylized and just different enough from other Star Wars offerings you can believe they’re handmade. The outpost will carry products that appear to be hand-crafted by local artisans, and you won’t be able to find them anywhere else. And then there’s Oga’s Cantina. The hub in the village of Black Spire Outpost, run by Oga Garra, is a place for visitors “to unwind, conduct shady business, and maybe even encounter a friend…or a foe.” The concept art (above) shows a style reminiscent of the Mos Eisley cantina, with patrons of all kinds including stormtroopers, humans, and aliens. RX-24, a.k.a. Captain Rex from Star Tours, is the cantina’s DJ, so the locale will offer music, drinks, and snacks.

And about those drinks. They include alcoholic drinks.

Libations for adults. Yes, alcoholic beverages are coming to the park outside of the exclusive Club 33 for the first time since park open in 1955; they’ll be limited to Oga’s Cantina. A Disney Parks representative told Nerdist the cantina “will serve an innovative menu of non-alcoholic and alcohol-based custom cocktails along with beer and wine options.” Hello, Star Wars themed cocktails!

More Star Wars in the Parks Galaxy’s Edge is a lot, but Disney isn’t stopping there. They’re opening an immersive Star Wars-themed luxury hotel near Hollywood Studios that will connect to their Galaxy’s Edge. The hotel, which doesn’t have an opening date yet, will be an experience from the moment you check in. You’ll be a citizen of the galaxy, complete with in-universe costumes, on a starship. Every room window will have a view of space. This post will be updated and expanded as Disney releases more news about the Star Wars additions. Bookmark this page and come back often! Visit the gallery below for more photos and see images from a Galaxy’s Edge model here at Nerdist.