Last year, after four wonderful seasons, we bid adieu to Star Wars Rebels. The series, which was the first Star Wars product released by Disney, had a tall order following up the beloved Clone Wars series. But creator/producer Dave Filoni and company created another incredible addition to the canon, which made the Star Wars galaxy deeper and richer than ever before. Now that it’s all wrapped up, here are our choices for the ten best episodes from the show’s entire run.

“Fire Across the Galaxy” 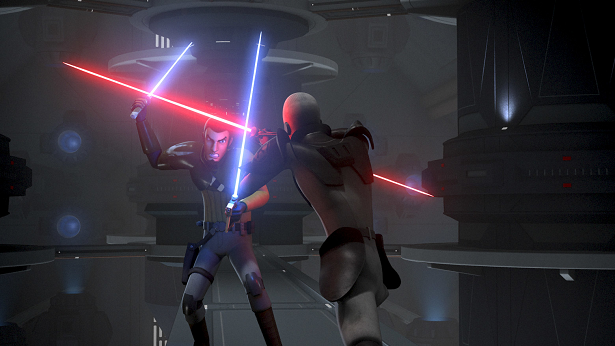 Much like Clone Wars before it, Rebels took some time to find its sea legs (space legs?). But the season one finale showed fans just what this show could be when firing on all thrusters. As the crew of the Ghost go on a mission to rescue Kanan from the Empire, the former Jedi and his apprentice Ezra face the Grand Inquisitor one last time. If that weren’t enough, this episode features the return of both Ahsoka Tano and Darth Vader, making for one hell of a memorable cliffhanger.

“The Siege of Lothal” 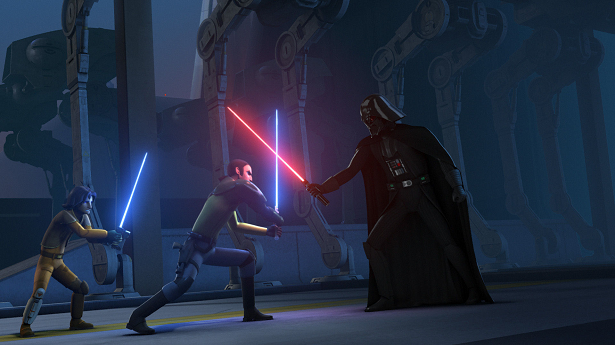 In the second season’s two-part opener, Darth Vader is finally summoned to deal with the rebel problem on Lothal. Not only do we get to see him in a lightsaber fight with both Kanan and Ezra, where he pretty much wipes the floor with them, but we also get the first hint outside of A New Hope that reminds us that Vader is the best pilot in the galaxy. The great James Earl Jones returns to voice Vader, making this extra special. 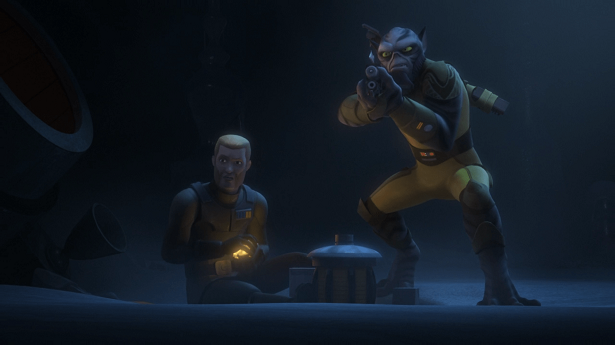 When Zeb and Imperial Agent Kallus both wind up stranded on a frozen moon, these two mortal enemies have to set aside their differences and find a way to work together to stay alive until they are rescued. A riff on the ’80s sci-fi movie Enemy Mine, this episode begins a compelling arc for Kallus over the course of the series, as he realizes the Empire he serves isn’t what he thought it was.

“Twilight of the Apprentice” 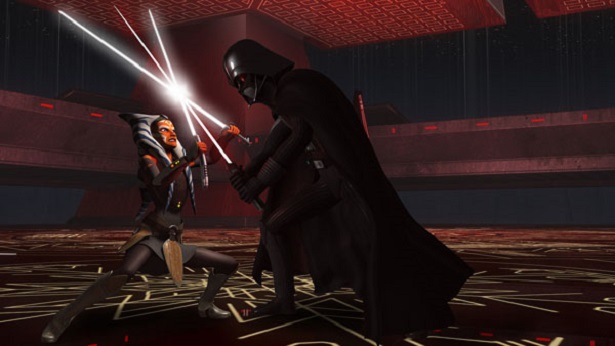 Once Rebels revealed that Ahsoka had indeed survived, the question on the minds of every fan was “will Ahsoka ever meet Darth Vader??” And if so, will she realize that he’s her former master, Anakin Skywalker? The confrontation fans had waited years for happens here, and it does not disappoint. And as if all that wasn’t enough, we also get to see the return of Darth Maul, who tries to take on Ezra as his apprentice. 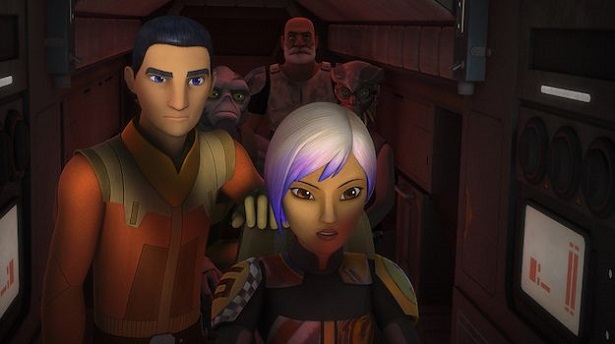 This hour-long third season opener finds the crew of the Ghost much different than when we’d last encountered them; Kanan is now blind, and Ezra has become more powerful in the Force. But the status quo of the crew changes in this episode, as this one introduces us to beloved Expanded Universe character Grand Admiral Thrawn, and gives us a new wrinkle to the mythology of Force users, as we meet the Bendu, who is neither light or dark side. 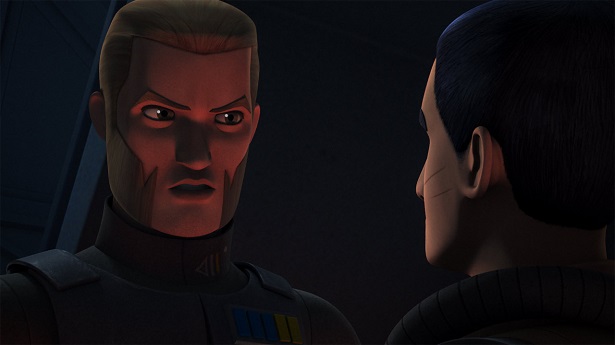 Ever since Agent Kallus switched sides and became the Rebel Alliance’s informant Fulcrum (taking over the title from Ahsoka), it was a ticking clock on whether he’d be discovered by the Empire or not. While he has almost everyone fooled, there’s one Imperial he can’t pull a fast one on: Thrawn. Not only is this a great episode to show how much Kallus has grown since the beginning of the series, but also reminds us that Thrawn is not one to be underestimated. 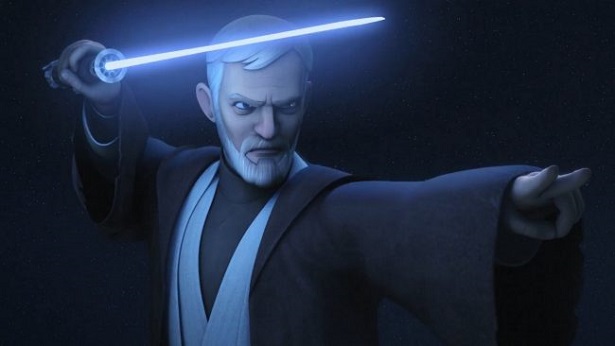 Another dangling plot thread left over from Clone Wars involved Darth Maul and his mission to destroy the man who took everything from him… starting with his lower torso. Once learning Obi-Wan is alive, Maul’s entire focus is on finding Kenobi and exacting his revenge once and for all. Although Ezra tries to warn him on Tatooine, Obi-Wan knows that facing Maul alone one last time is his destiny. An emotional end to one of Star Wars‘ most famous rivalries. 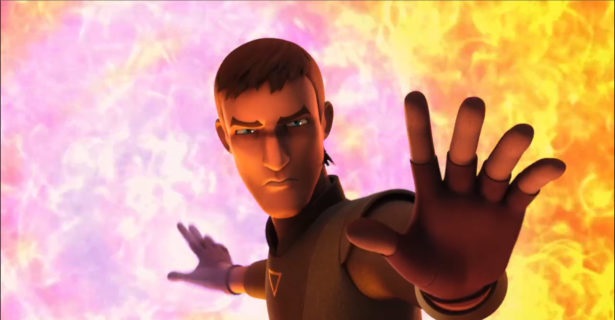 We knew that Kanan had to bite the dust by series’ end for the continuity of the films to make sense. But when Kanan valiantly sacrifices his life for the good of the galaxy and to save his friends, you try not to cry and get all emotional. A truly heroic sendoff for such an iconic character not only in Rebels, but all of Star Wars.

“A World Between Worlds” 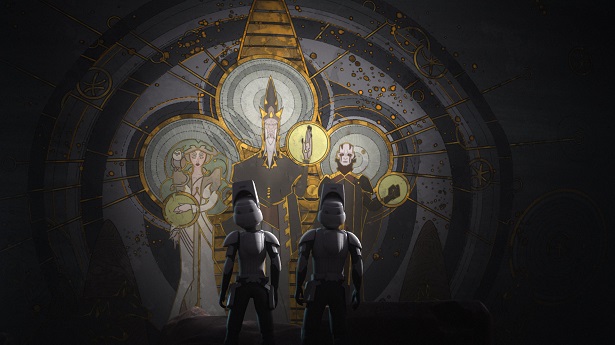 Until this episode, time travel was one big sci-fi theme never before used in Star Wars lore. When an ancient temple is discovered on Lothal, Ezra enters it and discovers a strange dimension where all time coexists, and he finds out he can use the portals within it to change history. Will he save his master Kanan? Or does he rescue someone else from certain death? This episode is chock full of amazing Easter eggs for hardcore Star Wars fans. 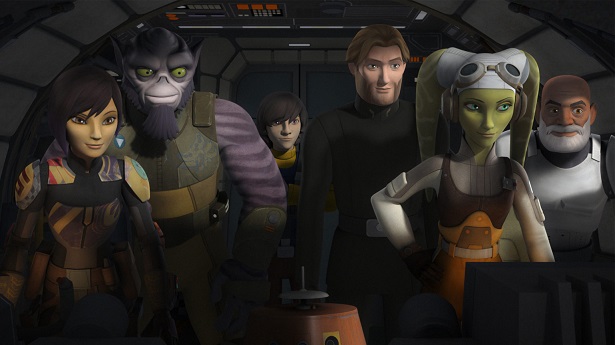 Unlike Clone Wars, Dave Filoni got to end Rebels on its own terms. And what an ending it is! Not only does Ezra step up and become the Jedi that Kanan always knew he could be, but the strife on Lothal that had been spotlighted since the very first episode is finally put to rest when the planet rises up against the Empire. Of course, this episode has one of the best epilogues ever, showcasing us what happens to the surviving members after the events of Return of the Jedi, but with still enough questions to have us all begging for more.