Everything to Remember Before CHILLING ADVENTURES OF SABRINA Part 4 - Nerdist

Everything to Remember Before CHILLING ADVENTURES OF SABRINA Part 4

Chilling Adventures of Sabrina is back, baby! On New Years Eve, Roberto Aguirre-Sacasa‘s majestic, satanic, and generally amazing series will come to end. But before we mourn, we’ve got eight brand new episodes to enjoy. In case you haven’t checked back in on Greendale and the Fright Club since their last adventure in January, we’re here for you. Consider this your sparkly CAOS spell book here to remind you of everything you need to know.

The end of the world is on hold (for now)

The finale of CAOS Part 3 was jam-packed. It began with Sabrina trapped for years in her rocky prison. Caliban imprisons her, reigning as King of Hell. Later, the underworld attempted a takeover of Earth, only to be defeated by the Pagans. Luckily, thanks to some magic, Sabrina from the future took the place of Sabrina in the past, freeing past Sabrina to stop Caliban and the Pagans.

The freed Sabrina united the hellish tchotchkes known as The Unholy Regalia; this give her the power to go back in time in the first place. Yay, time travel! Utilizing the magical objects—and some other creepy artifacts—she teleported around saving the day with the help of the expanded coven and the Fright Club.This endeavor stopped the Pagans from killing everyone and turning Greendale into a set piece from Annihilation.

There’s a new deity in town 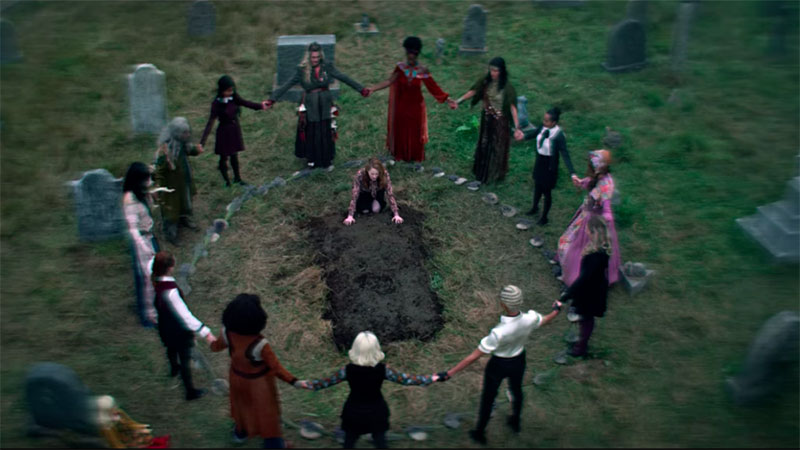 One of the biggest problems with CAOS from the outset was the concept of a show about women witches worshipping Lucifer and his male emissary in Lord Blackwell. But CAOS Part 3 rectifies this in a big way. After dying, coming back to life, and going on a spiritual journey with the ghost of her brother, Zelda Spellman comes to a realization. The only way to protect Greendale and her coven of witches—which now includes the once banished Hedge Witches—is to worship and channel Hecate. This Grecian goddess connects to witchcraft, the moon, and creatures of the night.

Hecate proves a far more fitting deity for the witches to follow. The coven’s power and the turn to Hecate leads to Blackwood and his twins, Judas and Judith, driven out and into the forest. Though that will come into play a little later here. After all, there’s nothing more dangerous than a sociopathic patriarch scorned. For now, the female church worships a female goddess, and has never been more powerful. 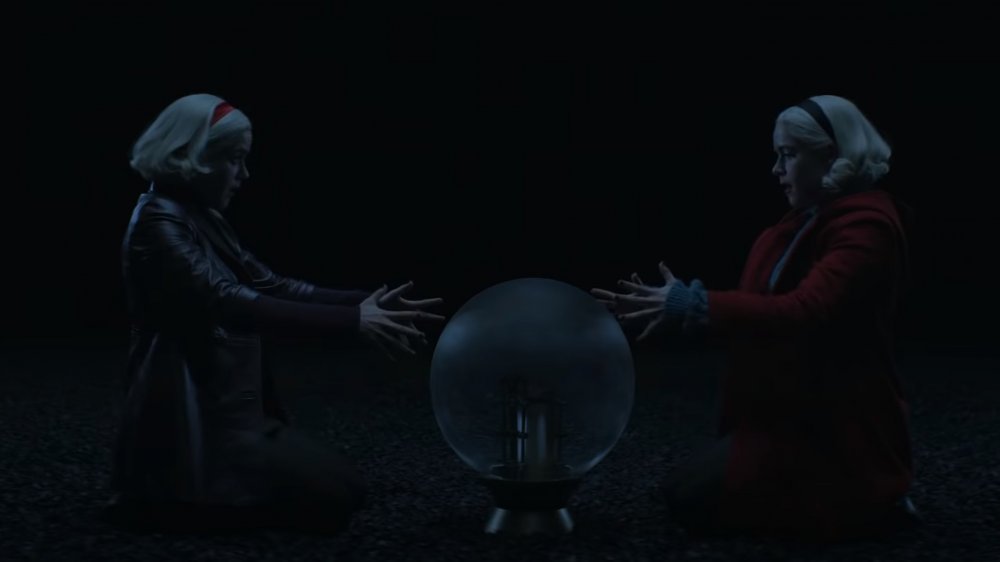 Remember those two Sabrinas we mentioned? Well, at the end of the final episode, future Sabrina (Spellman) who had lost all of her loved ones, came up with a plan. She wanted nothing more than to stay with her (now alive) friends in Greendale and grow up. But her father Lucifer waits in Hell for her to take her throne. So the pair of teen witches decide that past Sabrina (Morningstar) will rule over the underworld and future Sabrina (Spellman) will head back to Greendale. As lovely Ambrose points out: this choice is a paradoxical ticking time bomb. So expect this questionable teen girl planning to blow up in someone’s face as we head into CAOS Part 4. 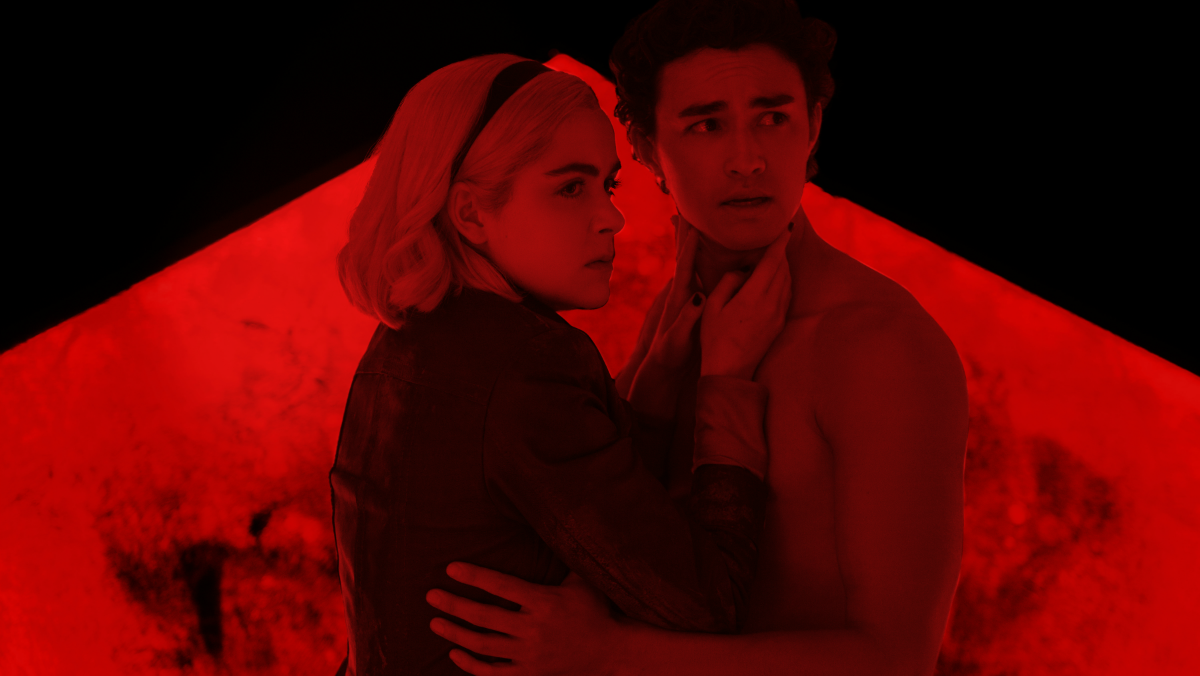 Don’t give us that look. Sure, we love the nefarious demonic adventures. But we also care about the soapy teen love affairs! If that is part of the reason you tune in, there’s a lot of catching up to do. After a whole season of Ambrose and Prudence magic, the latter leaves the hot warlock. Because Ambrose stopped her killing Lord Blackwood who then killed her sister, Prudence turned to Nick Scratch. Yep, trapped in hell sexy demon boy Scratch who was with Sabrina up until his new dalliance with the most stylish witch in Greendale.

It’s gonna be a tough season for Spellman as her other big-ex is still with her best friend. Roz and Harvey are going strong, and they even sealed the deal by sleeping together for the first time. Sure, it was part of a plan to secure their lives in case the Pagans were sacrificing virgins. But it was a huge step for them both that only strengthened their bond. Part 4 will also see Sabrina as the only single Fright Club member; Theo found love with the one-time Pagan and full-time Hobgoblin, Robin, who has decided to stick around in Greendale for good. How sweet.

The new coven has also introduced a new Greendale power couple in Zelda Spellman and Mambo Marie. The pair saved the day and found each other in the process. We love a powerful lesbian witch couple. And if Mambo Marie is right, there’s a greater darkness headed to Greendale that will test the witches and put existence as we know it at risk.

The Eldritch Terrors are coming 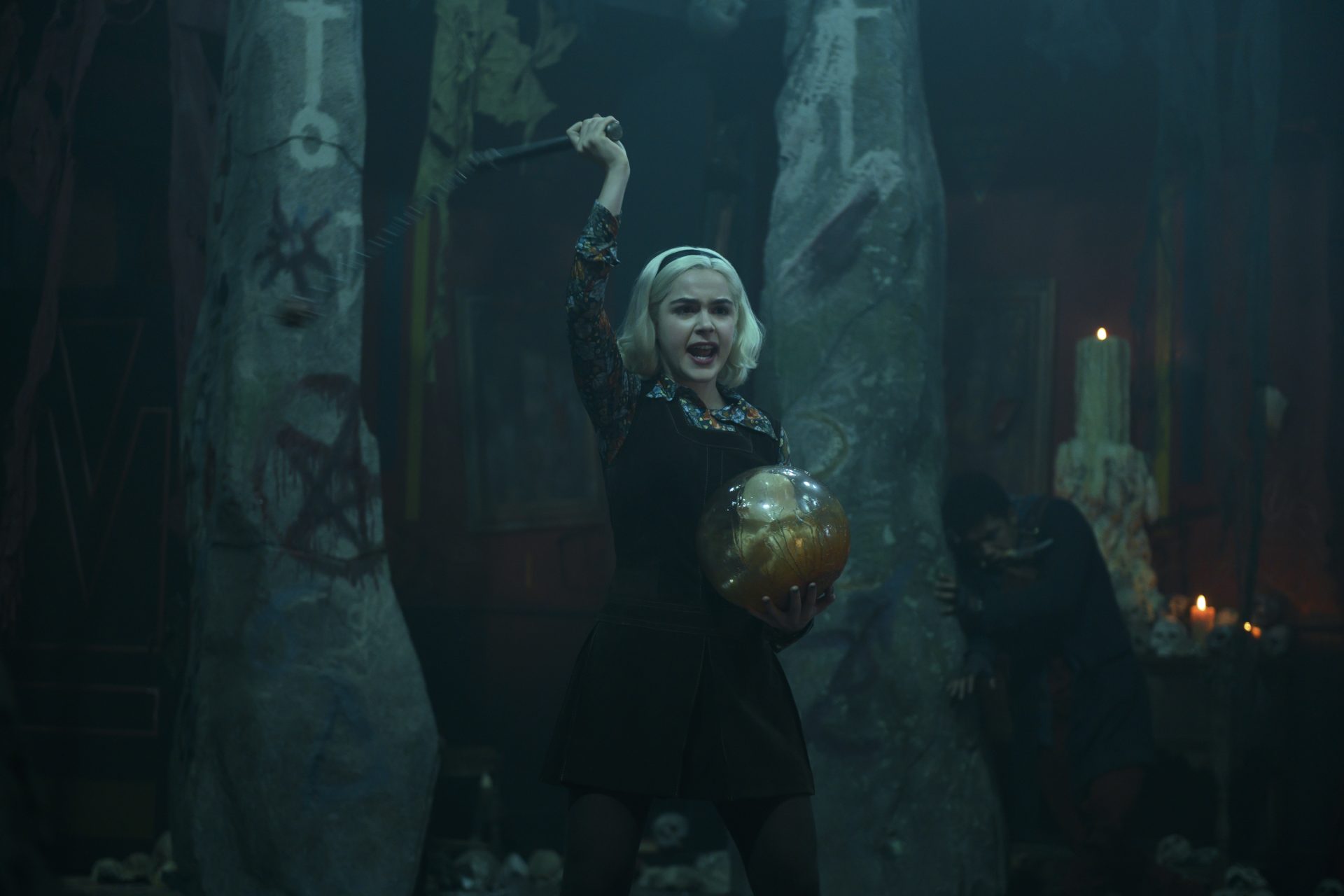 In the final moments of Part 3, the newly dethroned and very bitter Lord Blackwood did the unthinkable. Hecalled on the Eldritch Terrors. We know from the trailer that the Lovecraftian monsters will be the major antagonist this coming season. But the big question is whether or not the Greendalians will be able to defeat them. It is the final season, after all. Could the campy teen horror show go out on a bleak world-ending note? We’ll have to tune in to see.