Let’s say it’s been a minute since you’ve watched Battlestar Galactica, a.k.a. BSG. That’s fair—the show debuted over a decade ago, guiding Syfy, then known as the Sci-Fi Channel, to genre TV and breaking new ground in the science fiction space. Naturally, your best course of action would be to watch every episode, including “Black Market.” But if you find yourself short on time, we’ve distilled the series down to its most important episodes. You’re in for the faster-than-light (FTL) jump of your life. 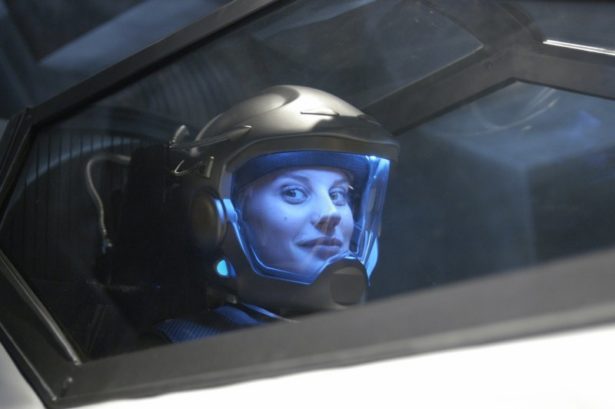 TV miniseries are usually reserved for historical docudramas, Stephen King classics, or star-studded HBO projects. So, kicking off a four-season sci-fi series with a three hour miniseries initially felt like an odd choice. But, what could have been a misstep was the right move—the Battlestar Galactica miniseries lays out what this world looks like, its important players, and the thematic questions the show will pose. It’s engrossing from the start and serves as a fine introduction to what’s to come.

Technically, “33” isn’t the pilot, but it would have been a damn good one. Commander Adama (who you, the viewer, are already pretending is your dad) and the Galactica crew must complete a FTL jump every 33 minutes, meaning five and a half days without sleep. It’s an exhausting episode to watch and illustrates just how draining it is and will continue to be to evade the Cylons. 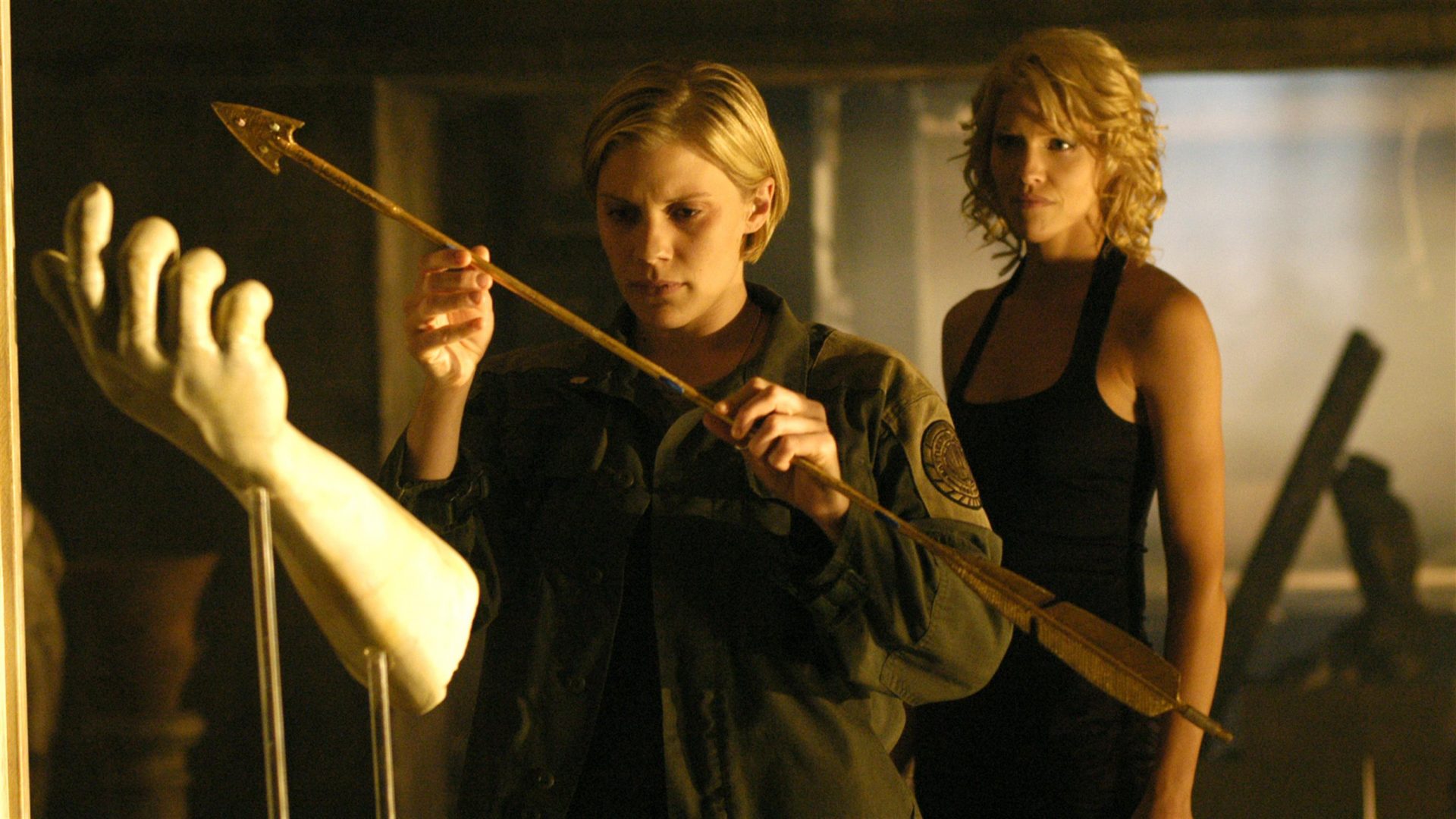 At first blush, it seems like this two-parter’s sole purpose is to move the story along. The crew finds a habitable planet for the first time, and they feel conflict over whether to settle or continue on in their search for Earth. The most important factor here is what happens when a Cylon unaware of their Cylon status finds out what they are. Cliffhangers don’t always land, but there’s nothing like the shock at the end of the episode. 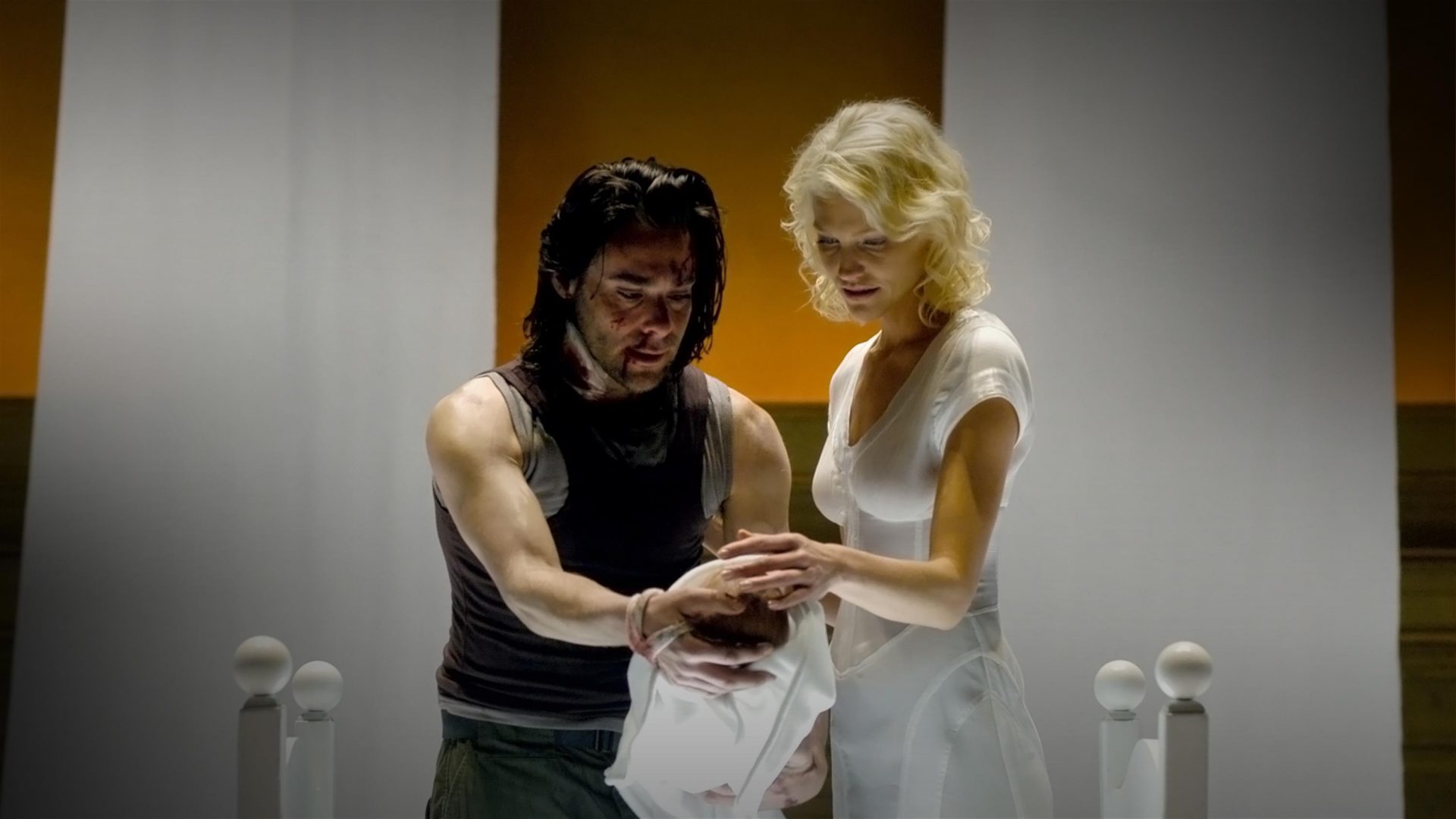 The second season opener is a sort of Saul Tigh character study. We learn why he’s loyal to Adama, what keeps him in the fleet, and how his leadership may not hold up to scrutiny. Simultaneously, we see the Cylons’ sheer power both on the ship, which they successfully crash into, and on Kobol, where they ambush Galactica crew members. 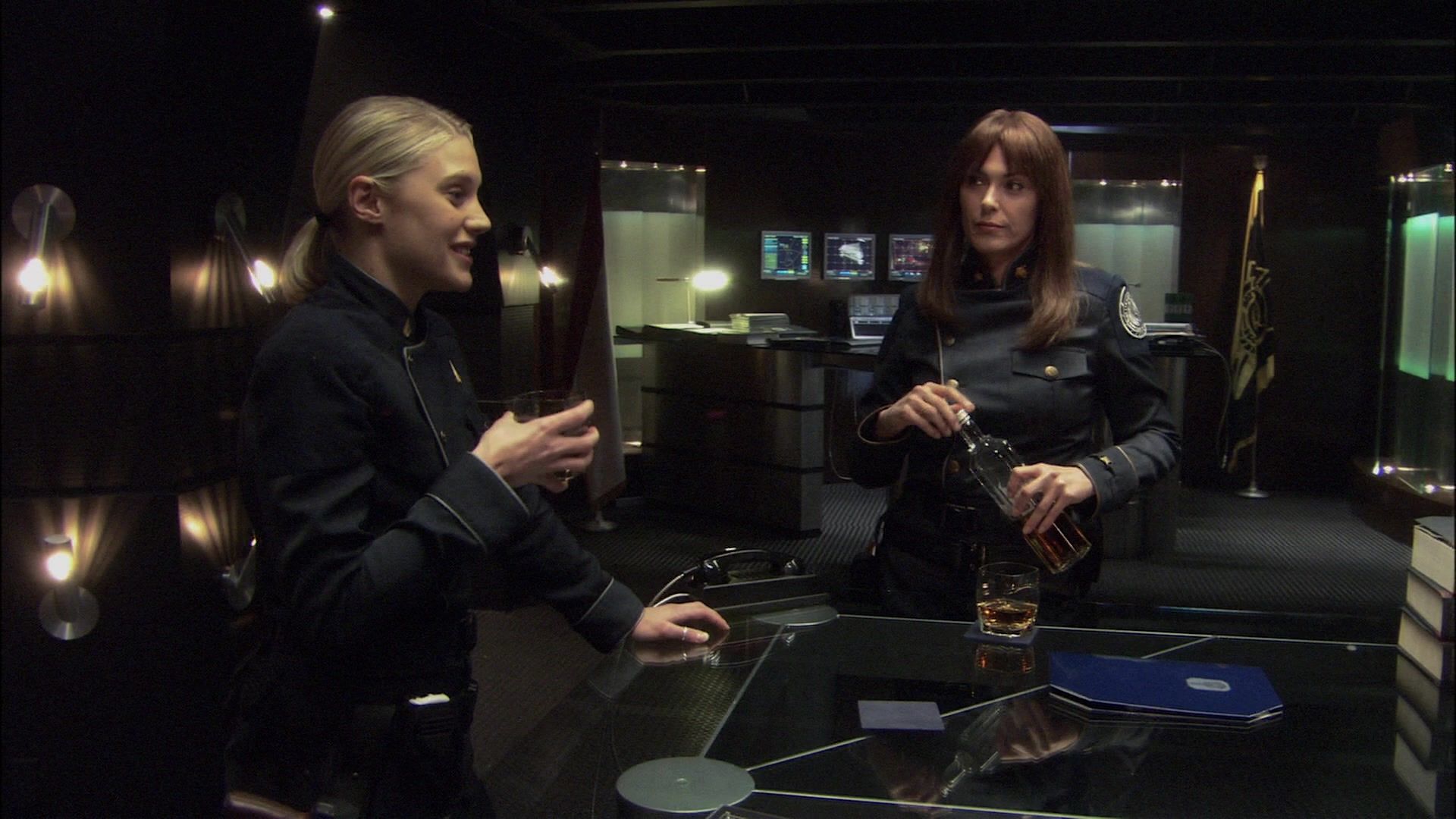 In “Pegasus,” the episode that precedes this two-parter, we meet Admiral Cain, who commands another colonial ship, Pegasus. It’s not long before Cain reveals herself to be a ruthless leader who treats Cylons like animals and rules over her crew with an iron fist. In their struggle for control, Adama and Cain plan to assassinate each other. Ultimately, both back out, but Cain is put in a difficult situation. 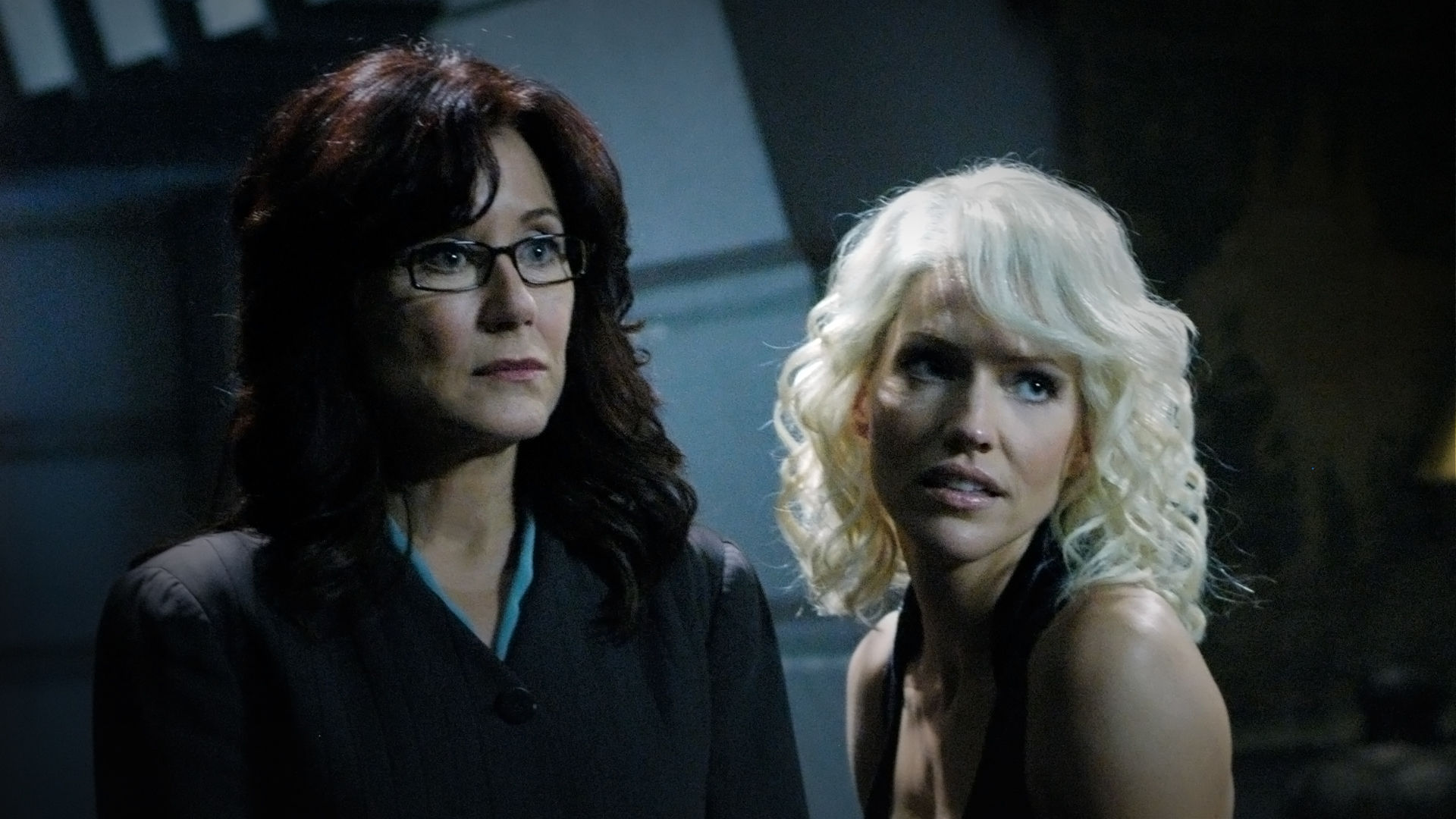 The season two closer features several bold choices on the part of the writers: making Gaius Baltar president rather than the levelheaded Roslin, solidifying some romantic relationships, and, most notably, jumping forward a year to see what Baltar’s done with New Caprica, the crew’s settlement. It’s a great refresher course in character motivations, the goals of the Galactica, and the series’ themes on a whole. 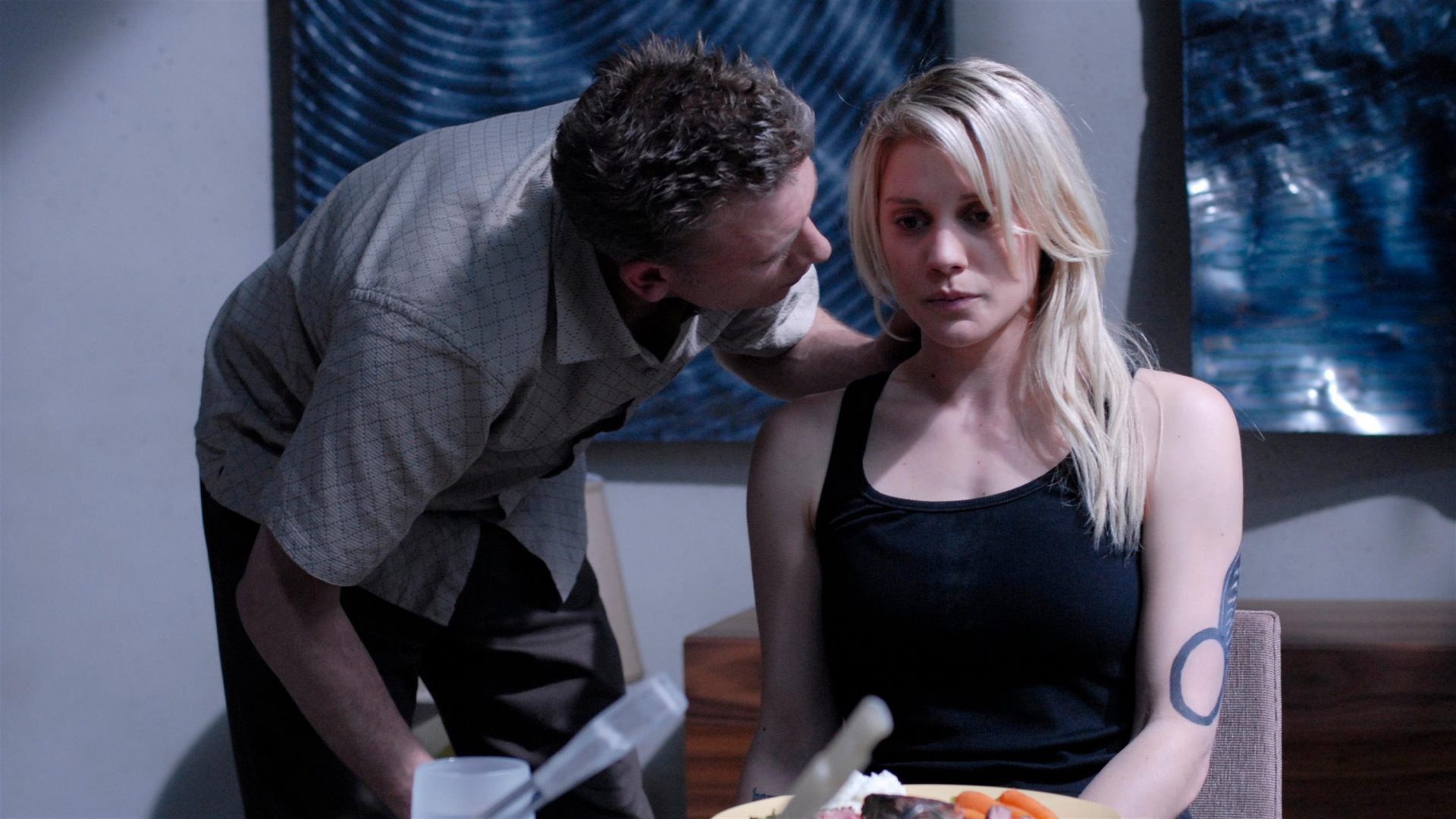 Remember that occupation? It’s still going strong four months later when season three picks up and we find our crew fractured, some imprisoned by Cylons on New Caprica, others in space, planning recovery missions. This is one of the more obvious instances of BSG mirroring reality, but it wasn’t too heavy-handed to garner an Emmy nomination. 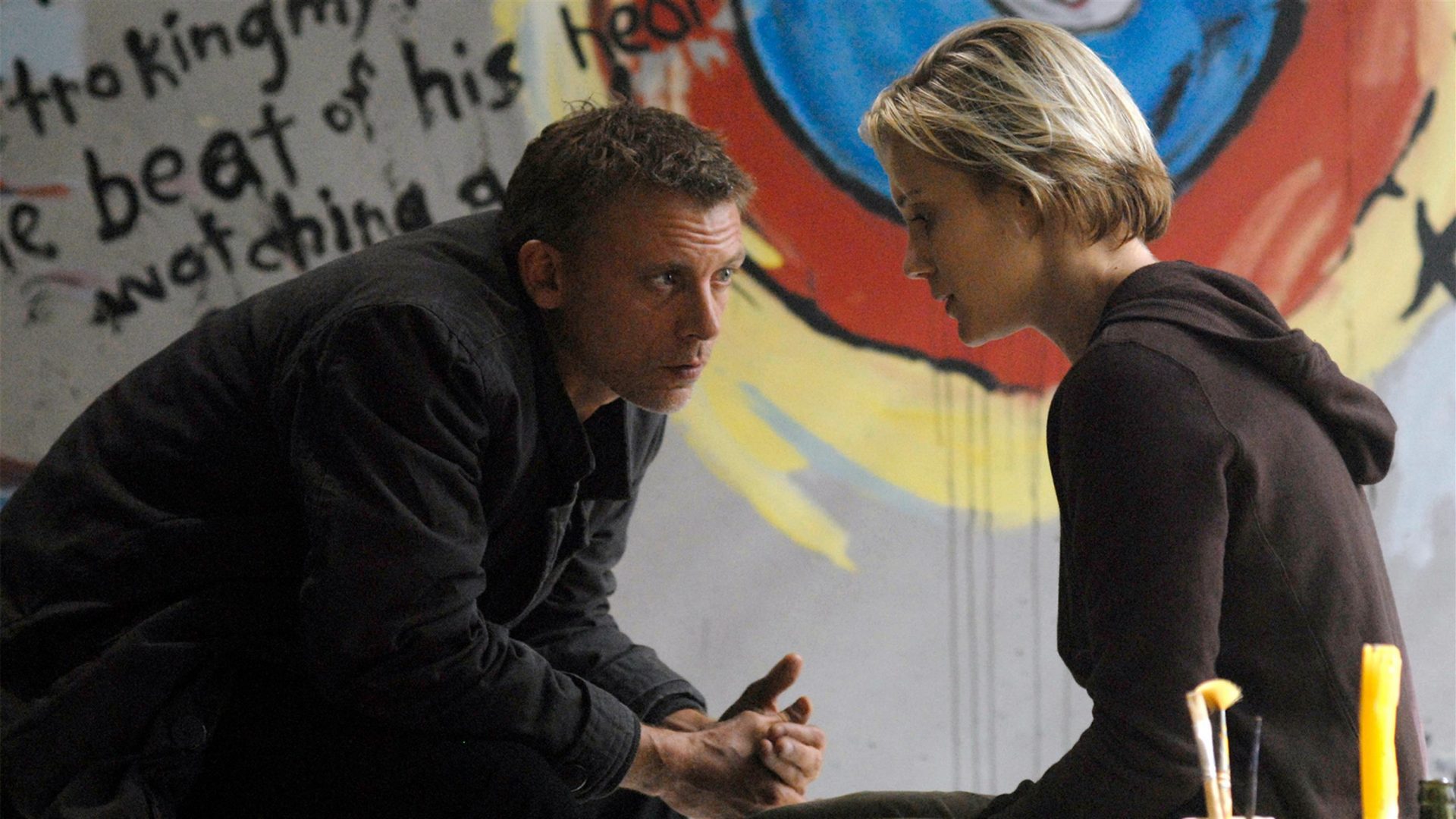 Starbuck was always one of the most compelling characters on Battlestar Galactica, a brash, bold, talented pilot with a special connection to the Adama family and a murky, mysterious destiny referenced by certain Cylons time and again. When she dies while battling a Cylon Raider, it’s in the midst of several scenes depicting her dreams and memories. Basically, we get to know Starbuck like we never have before. 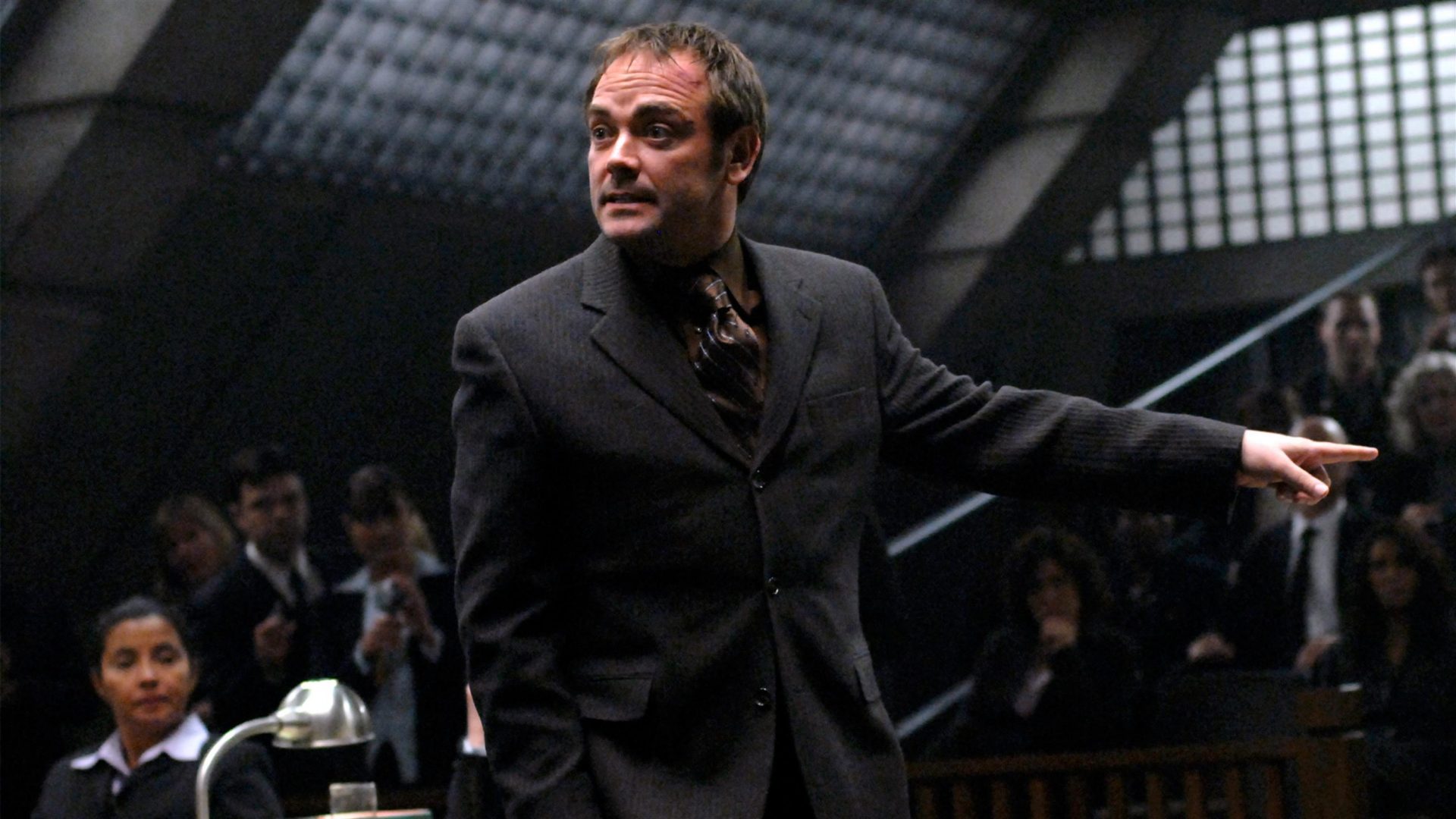 The final five Cylons are referenced throughout the series, but we don’t find out any of their identities until the masterpiece that is the third season’s finale.  An earworm version of “ All Along the Watchtower” draws four of the five together. A couple of them are wildcards. As if that weren’t enough, Starbuck returns and shares an important discovery. Now that’s entertainment. 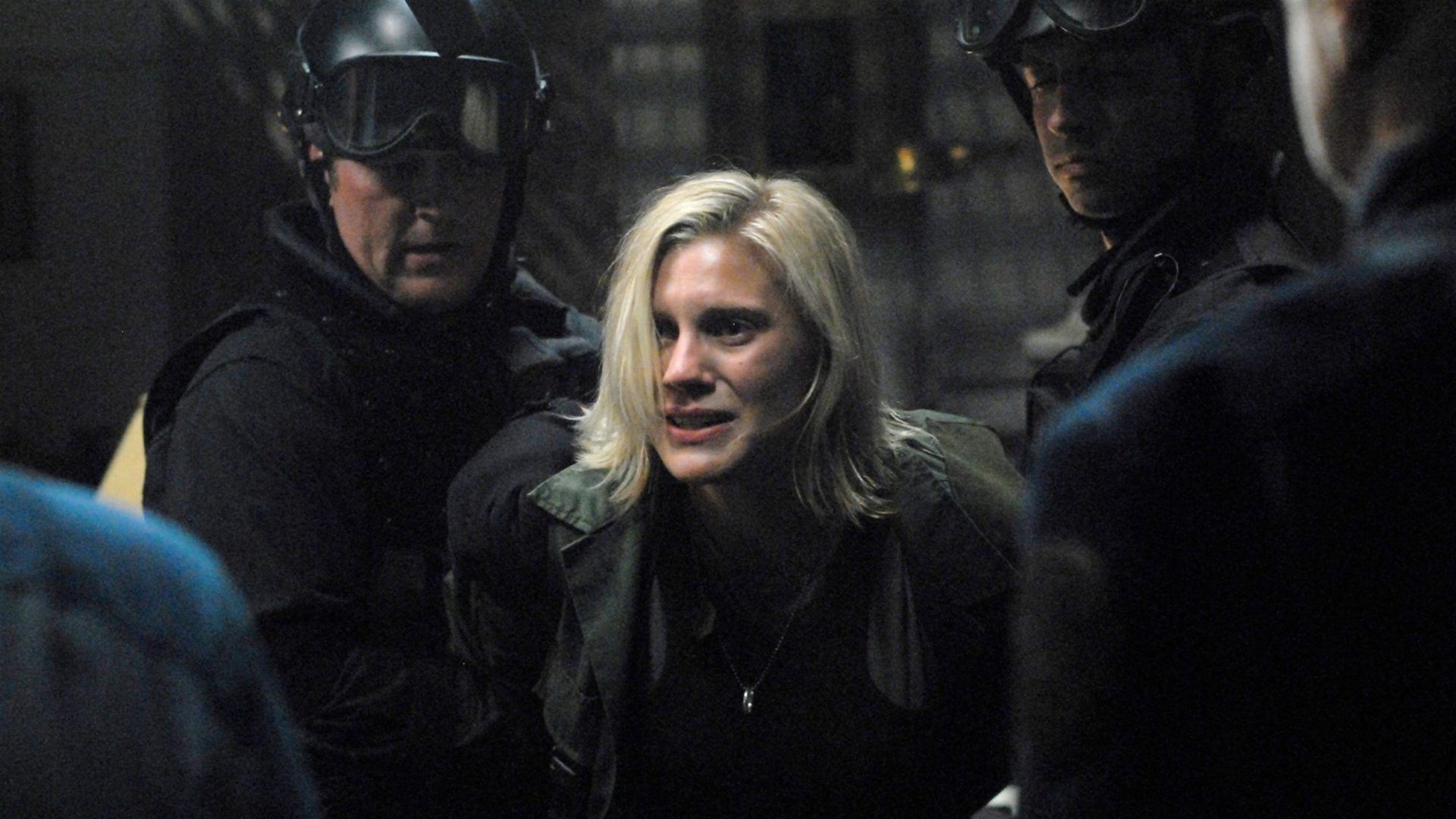 Another Emmy-nominated episode, this early entry in the show’s final season sees some of the show’s heavy hitters—Starbuck, tactical officer Gaeta, and on-and-off pilots Helo, Athena, Lee, and Anders—splitting off to follow Starbuck’s vision. That’s only after some sweet Cylon action, with a Raider recognizing one of their own and the known models panicking over whether or not to effectively lobotomize the Raiders so the final five’s identities won’t be uncovered. Crew infighting is nothing new on this show, but seeing it happen among the Cylons is always a treat. 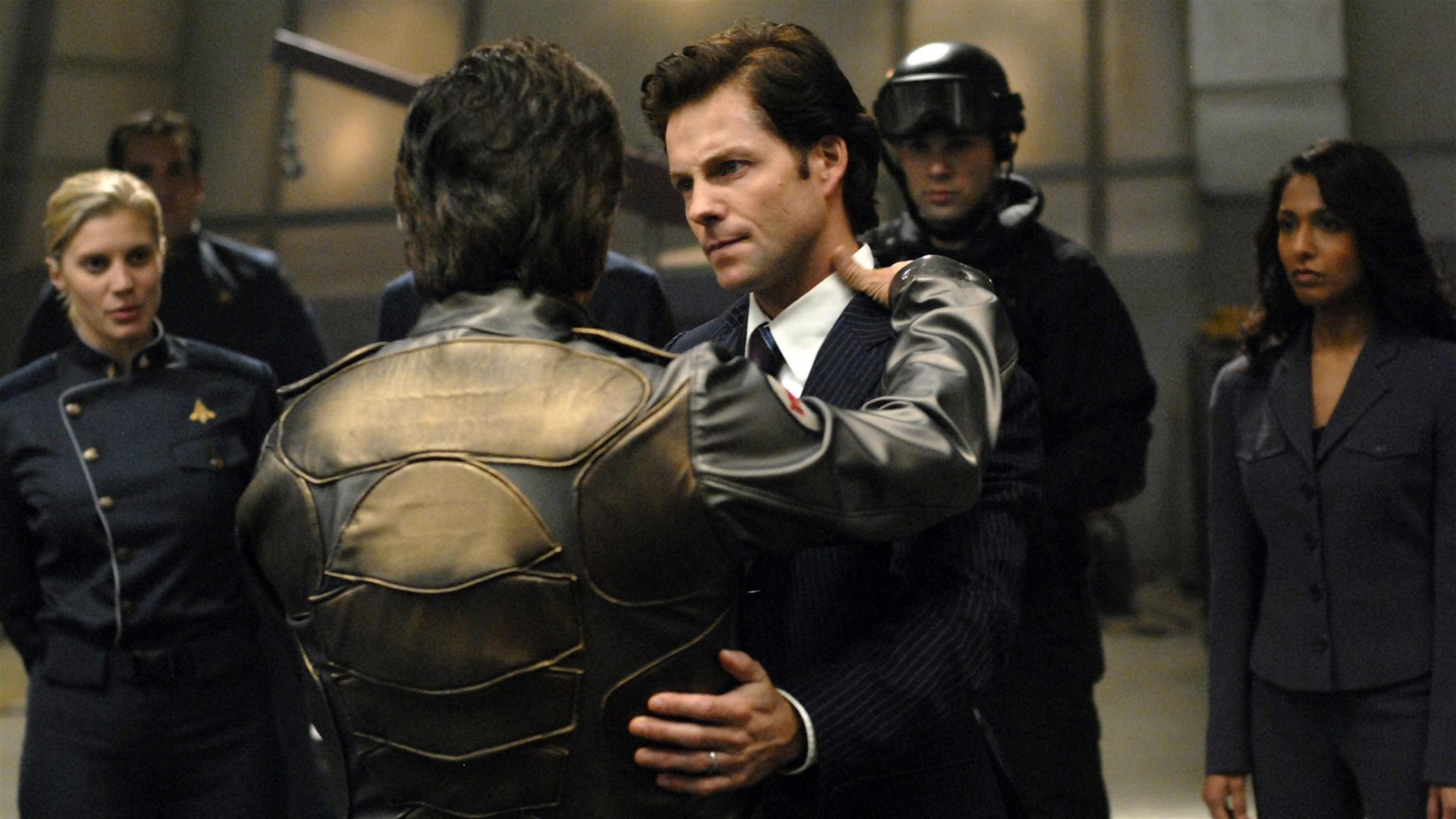 From the very beginning, we know that the fleet’s ultimate goal is to find Earth. What happens when they finally do is devastating. The Earth, it turns out, is a cold, dead place, completely ravaged and hardly habitable. Battlestar Galactica has never been a happy show, and that’s often to its benefit, perhaps more than ever here. 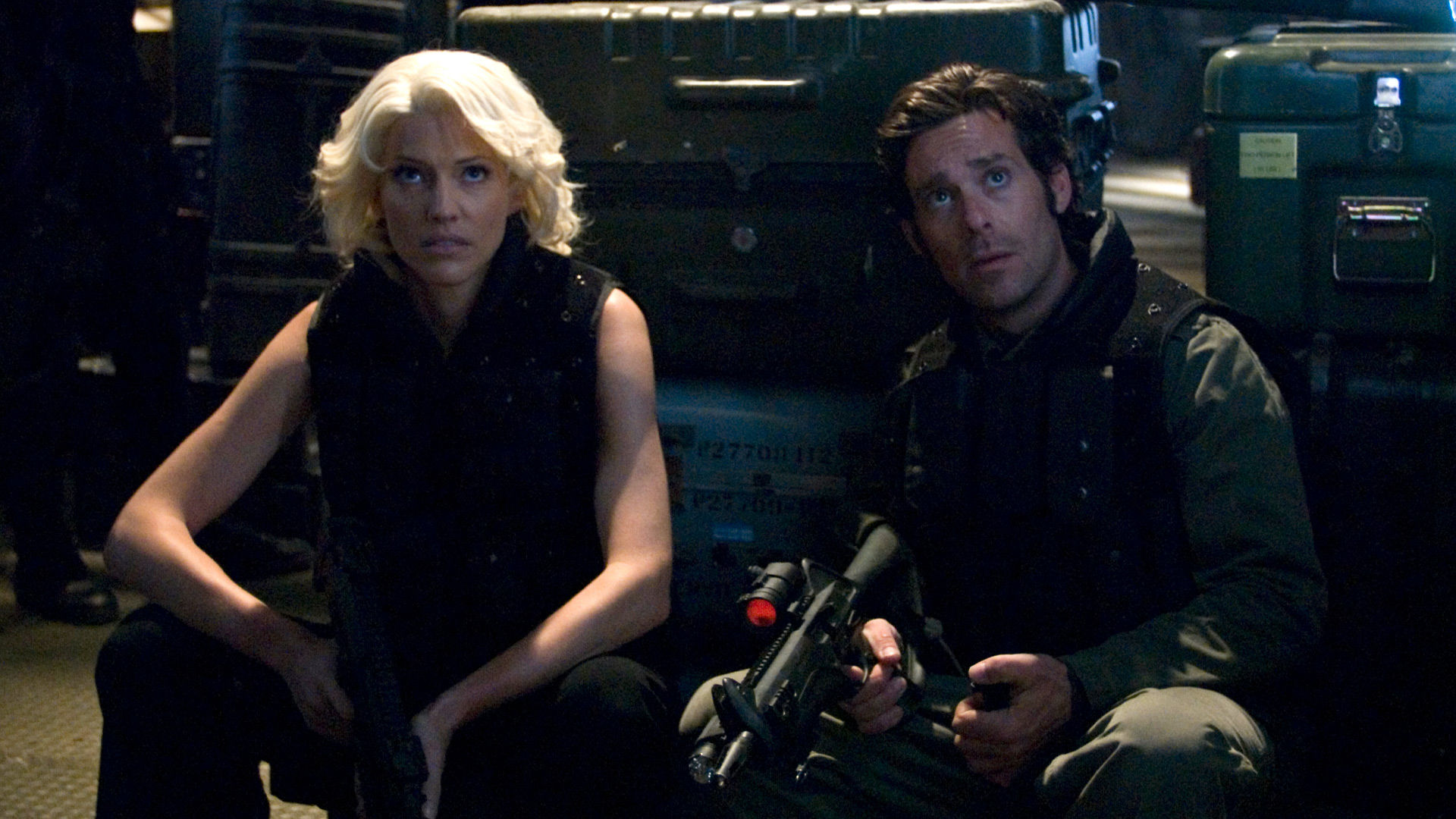 Finales can sometimes focus too much on tying up loose ends and not enough on emotional resonance. The three-part conclusion to BSG balances things, and the mini-arc deserves more than being distilled into a paragraph. This is television that ought to be savored even if you’ve marathoned the rest at FTL speed. Do yourself a favor, say a hearty, “So say we all,” and invest a few hours in the end of one of the best sci-fi stories ever told.