This Light-Up STAR TREK Tree Topper Is Truly Far Out

For decades, Hallmark has made Trekkers everywhere happy with their exclusive Star Trek themed keepsake ornaments. We’ve seen the various characters, starships, and even shuttlecraft get their holiday due. But this year, via Geeks Are Sexy, we’ve discovered that Hallmark has taken the proverbial Klingon cake with their Star Trek holiday offerings. For 2020, they’ve unveiled a light-up, interactive starship Enterprise tree topper, one which even interacts with three character-based ornaments!

The characters who get their own ornaments are Captain Kirk, Lt. Sulu, and Lt. Uhura. But here’s the coolest part; all three are the version from the classic episode “ Mirror, Mirror,” where Kirk and company travel to an alternate universe and encounter their “evil” counterparts. The character ornaments are sold separately from the tree topper.

Here is the official description form Hallmark for these out-of-this-world holiday ornaments:

“Add the flagship of the United Federation of Planets—with the theme song to the original Star Trek television series—to your holiday celebrations with this U.S.S. Enterprise Christmas tree topper. Plug it into the included power adapter for constant illumination, then press the button—either on the included Starfleet insignia remote control or on the top of the tree topper—to start a sound and light show featuring the music of “ Theme from Star Trek.” Connect one or more Star Trek Storytellers ornaments—Captain James T. Kirk, Lieutenant Hikaru Sulu and Lieutenant Nyota Uhura (each sold separately)—to unlock additional performances that you can’t access with the ornaments alone!” 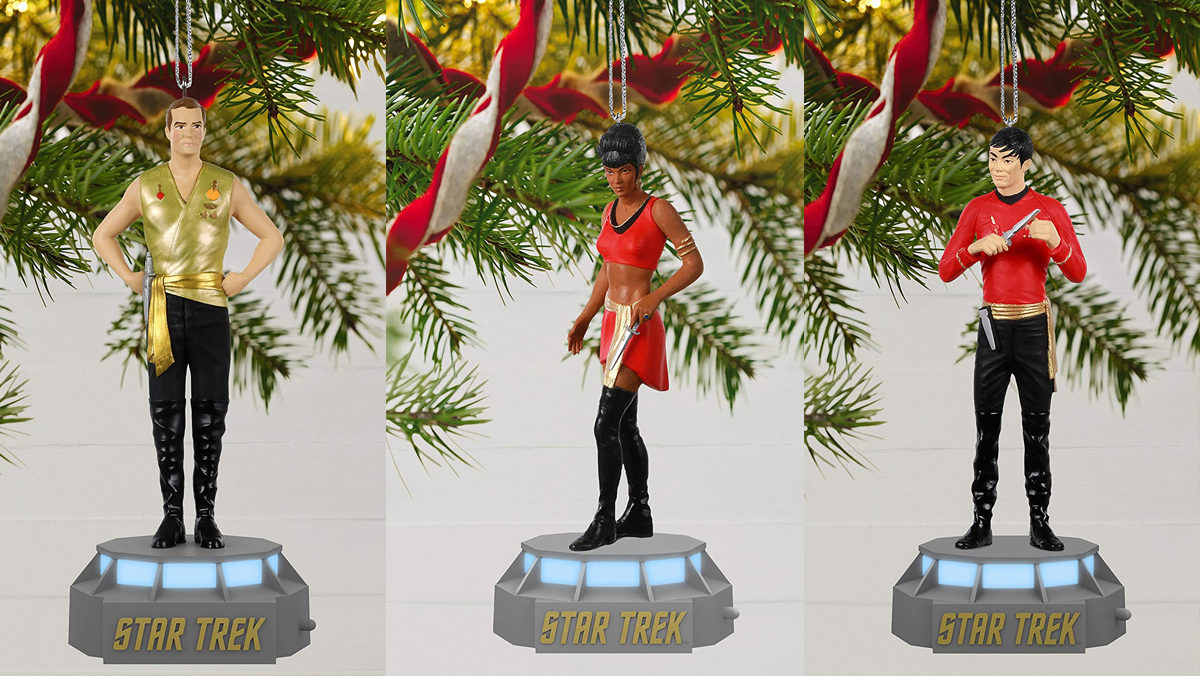 The episode “Mirror, Mirror” is one of the most beloved of the original series, and introduced the concept of the Mirror Universe to Star Trek lore. This one episode spawned several continuations in not only Deep Space Nine and Enterprise, but most recently, Star Trek: Discovery. In fact, one of the series leads, Michelle Yeoh’s Philippa Georgiou, hails from the malevolent Mirror Universe. Of course, “Mirror, Mirror” also introduced the running gag in many a TV series, which suggests that the only thing one needs to identity one’s “evil twin” by is a goatee and well placed scar. So thank you for that too Star Trek!