This Season of Anime Is One Big, Fun Science Lesson - Nerdist

“Educational entertainment” usually ends up sacrificing one of these things for the other. You either get a dull but highly educational story, or one that emphasizes entertainment but ends up blending facts or forgetting to teach you something altogether. But sometimes, you get a series that endeavors to provide fantastic stories that also teach us about science. (And more effectively than school.) We’ve seen that a lot this winter season of anime, particularly in Cells at Work, Heaven’s Design Team, and Dr. Stone. What these series have in common is an unequivocal admiration and love of science in all forms, and a desire to genuinely teach audiences something.

Human Biology in Cells at Work

First, there’s the show about you. Yes, you. Cells at Work, and its spin-off, Cells at Work: Code Black reimagine the human body as a huge metropolis where every cell is an anthropomorphic blue-collar worker performing different tasks to keep its host alive, with varying levels of success. Cells at Work uses a monster-of-the-week format and draws from action anime tropes in order to tell a very violent story that’s instantly familiar, even if its characters and locations are new, and then explain how those characters and locations relate to your own body. 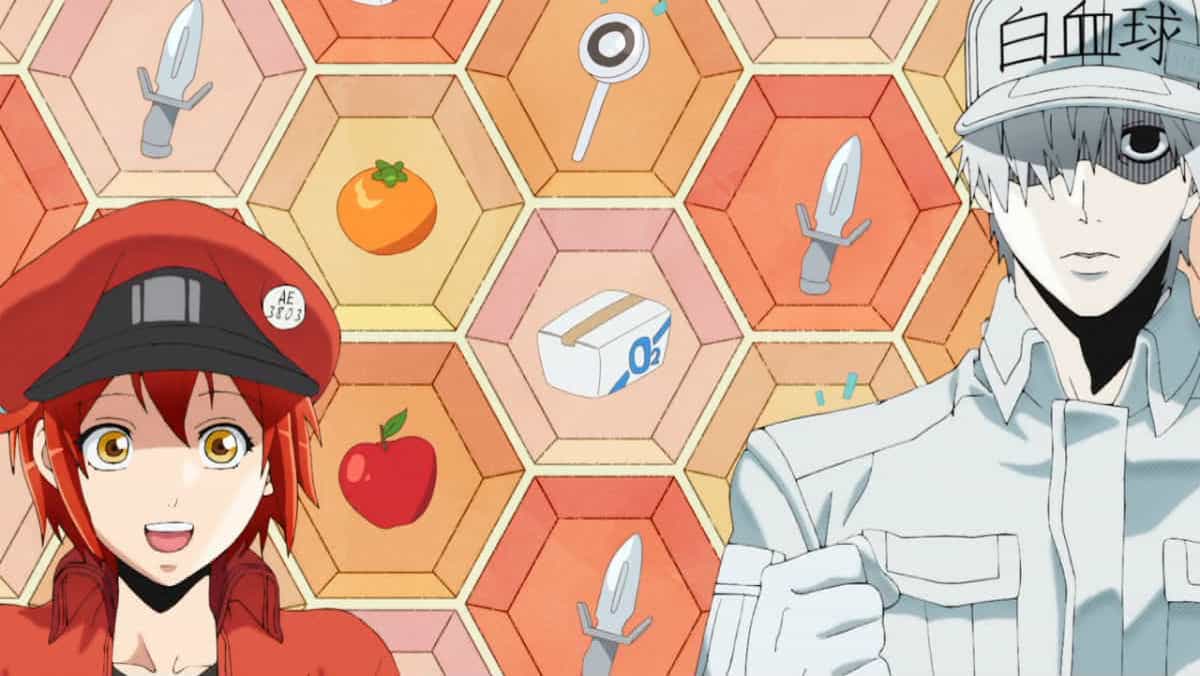 What happens when you get a cold, or food poisoning? Code Black comments not only on unhealthy habits, but also on how “black company” working environments in Japan lead to overworked bodies that just can’t keep up. The spin-off is all about how the cells work until they die. The system is built so that they can never win, and can’t do anything about it. They are even pitted to hate each other despite all suffering under the same “boss.”

Whether it’s what happens to your individual cells when you drink or smoke, or the horrifying pain of a kidney stone, Code Black is a fantastic wake-up call to take care of your body. The show reimagines complicated scientific processes as actual people with hopes and dreams; the small-sized platelets take form as cute little children always closing up wounds. Meanwhile, Code Black bitterly reminds you that any attack on the kidney is permanent because glomeruli (here portrayed as bathhouse workers) cannot be regenerated by the body. It’s no wonder the show has fascinated real doctors!

Heaven’s Design Team is a workplace sitcom that will fill the hole in your heart left by The Good Place. This anime centers on the team in heaven tasked with designing new animals to populate the Earth. The show doesn’t even limit itself to real animals; the first episode shows one of the designers creating a functioning pegasus to satisfy the order for an animal that can eat leaves from high-up tree branches. Of course, the idea doesn’t work, not just because we don’t have pegasi in real life, but because they realize the only way a pegasus could have enough muscle mass to fly is by being incredibly buff and also poop like a machine gun. 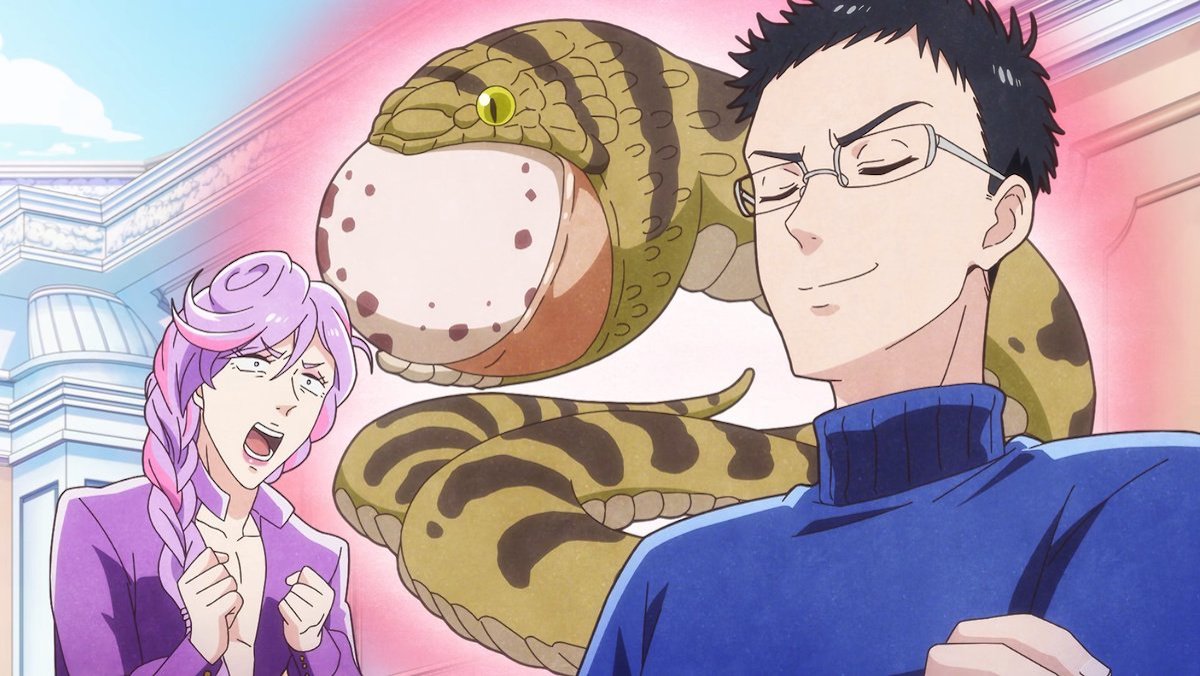 Episodes later, the pegasus comes back into play when an assignment demands a flying horse. The only way the concept works is by completely redesigning the horse and coming up with the horseshoe bat. (Which actually has more in common with horses than birds.) By placing the show in the context of illustration and graphic design, Heaven’s Design Team teaches about how certain animals evolved to be how they are. It’s also a pretty poignant workplace comedy about dealing with demanding, indecisive, eccentric clients.

In episode two, we see two designers trying to one-up each other by giving new features to a dolphin and a squid, ultimately resulting in a giant squid and in the sperm whale having a sonic beam. This is a hilarious show that answers the question of why there are so many weird animals on the planet, and why certain mythological beings couldn’t exist. (As a bonus, a recent episode had the designers work on an order for an animal that is “aquatic but a bad swimmer,” resulting in the utterly adorable sea otter.)

Lastly, there’s Dr. Stone, the post-apocalyptic adventure shonen that takes place thousands of years after all humanity got petrified. The story follows one kid on his quest to bring back civilization by replicating all kinds of discoveries and inventions; it reminds us of how amazing it is that we have everything from phones to music to penicillin. Dr. Stone is all about the human ingenuity and resilience that paved the way for the inventions we take for granted today. 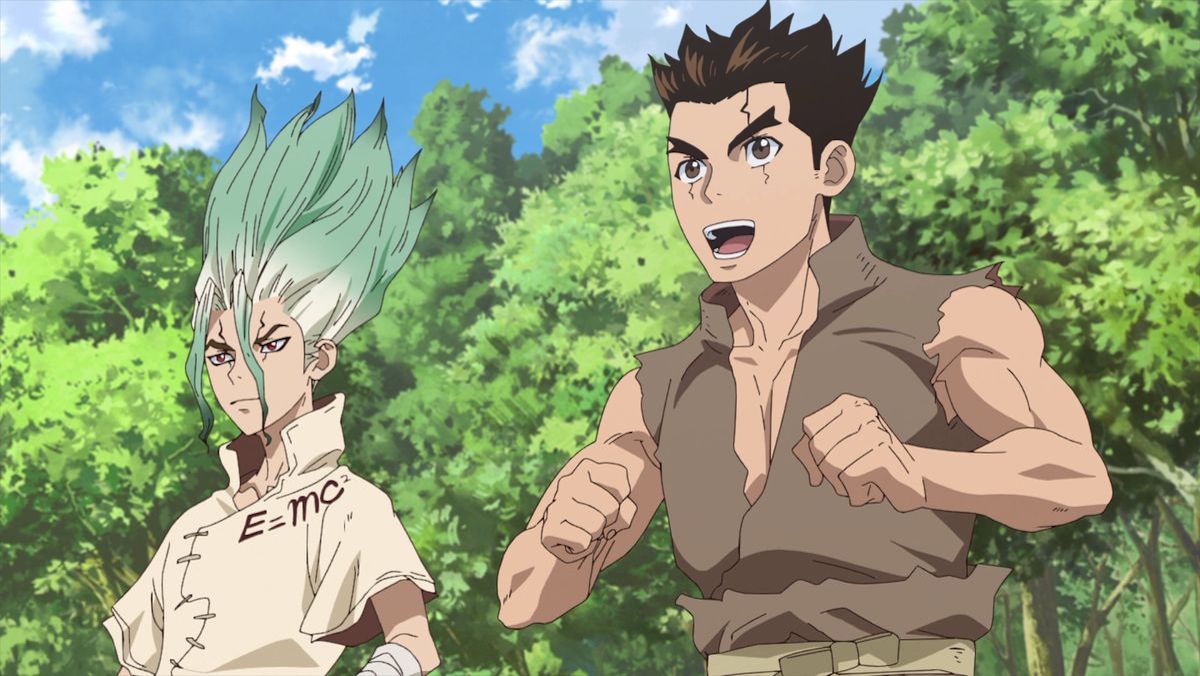 In his efforts to bring back civilization, hero Senku teaches the residents of post-apocalyptic Earth about the wonders of science. To win over the village’s heart, he doesn’t make them a printing press or a clock, but ramen. Senku’s (and the show’s) goal is to awaken the natural curiosity he knows resides in every human.

A pivotal scene late in the first season involves one of the already science-curious villagers taking one of Senku’s inventions and use it to create something new as a surprise: a waterwheel. The villagers had no previous knowledge of what a waterwheel is; they just thought it would be a good idea to make the process of spinning a wheel easier. But they accidentally discovered the key to entering the age of energy and automation.

Dr. Stone‘s secret power is twofold. On the one hand, it explains—very meticulously and in simple terms—the historical context and the process of such discoveries/inventions as clothing and shelter, soap, glass, or the engine. But it also serves as a love letter to the natural curiosity that makes us want to do more with the world we are given. To make things that can improve our lives, sure, but also just cool stuff like music and entertainment. (Warning: a pertinent scene will bring tears to your eyes.) The series emphasizes the reactions of the villagers who’ve never known any of this stuff, but now feel a burning passion to bring back all the wonders they missed. In short, Dr. Stone reminds us that science, uh, finds a way.

This season of anime offers funny, action-packed, and emotional shows never that never their eyes off their target: to teach you something. Furthermore, to make you appreciate the wonderful gifts science and the natural world have given us. Maybe next time you scrape your knee, you’ll think of thousands of cute platelets banding together to close the wound. Or you’ll look at a photo of a koala and realize how horrifying those cursed creatures are. Or maybe when you use your phone to read this article, you’ll feel a bit differently knowing exactly how we got here. And how far we can go if we want to.