EARWIG AND THE WITCH Lacks That Ghibli Magic - Nerdist

EARWIG AND THE WITCH Lacks That Ghibli Magic

While Pixar certainly has a brand people trust and recognize, I think it’s fair to say no animation studio has as consistent an output with as wide an appeal as Studio Ghibli. Their films, and specifically those of genius co-founder Hayao Miyazaki, were for a long time some of the only Japanese animated films to find major success and wide acclaim from Western audiences. That said, they’ve certainly felt the pressure to join the 3D CG animation age. Their first endeavor in this arena is Earwig and the Witch; sadly, it’s a letdown in just about every arena.

There hadn’t been a true, in-house Studio Ghibli movie since 2014. That film, Hiromasa Yonebayashi’s  When Marnie Was There, was at the time the last gasp from the studio. Hayao Miyazaki had again announced his retirement following 2011’s  The Wind Rises, and though co-founder Isao Takahata’s 2013 film The Tale of the Princess Kaguya had received an Oscar nomination, he didn’t have any more movies on his docket. Takahata passed away in 2018; while Yonebayashi, one of Miyazaki’s protégées, had split off to form Studio Ponoc and direct Mary and the Witch’s Flower. The last film to bear the Ghibli logo was The Red Turtle, a Dutch-German co-production. 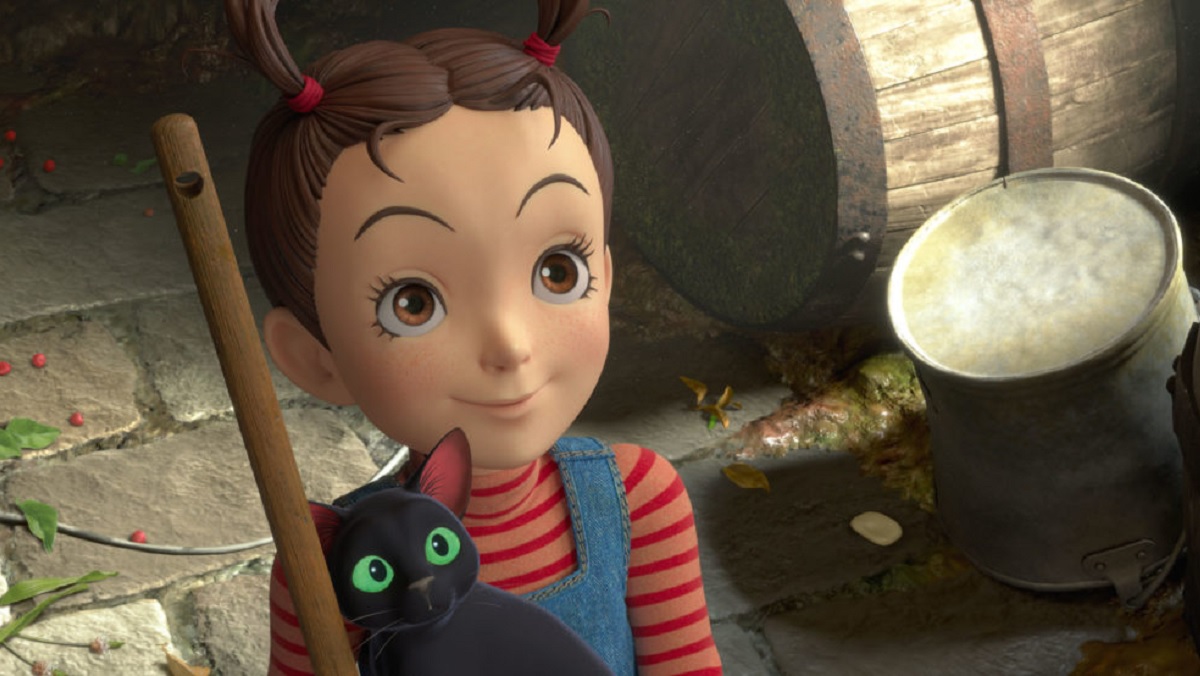 So why does any of this matter? Well, it speaks to what seemed to be the end of an era for Studio Ghibli. Miyazaki’s production time per film was longer and longer, and other, faster studios were raking in more hits. Miyazaki’s son Gorō—director of Tales from Earthsea and From Up on Poppy Hill—dabbled with 3D CG animation for the TV series Ronja, the Robber’s Daughter which endeavored to keep the Ghibli house style and transpose it to 3D. This, plus Hayao’s return to work on shorts and the now-2023-expected How Do You Live? have given the studio a bit of a bump.

In the interim, Gorō directed Earwig and the Witch, originally for television. This ought to have been, if not up to the standards of the Ghibli heyday, at least a decent effort. A proof of concept. Sadly, it’s basically nothing. 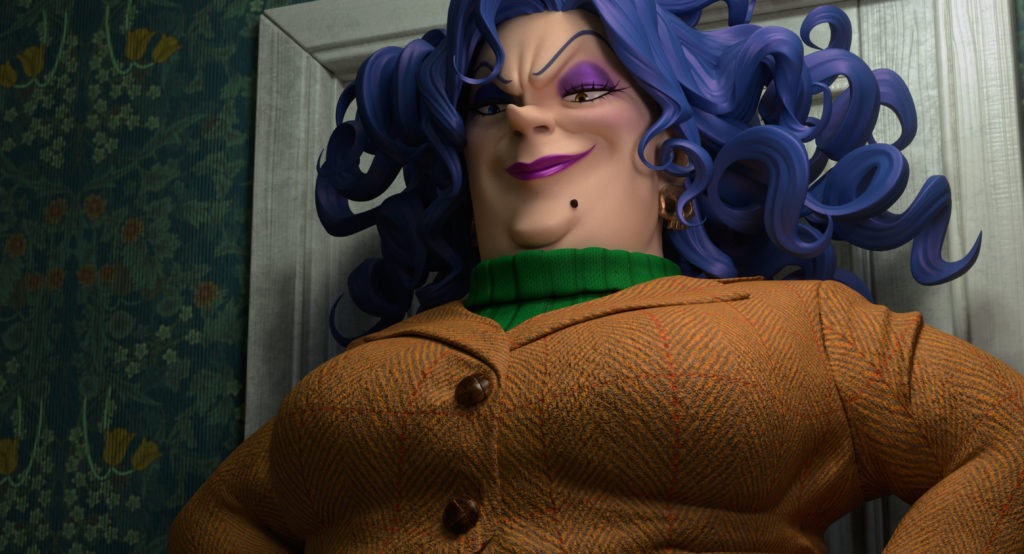 Based on the novel by Diana Wynne Jones, who also wrote the source material for Howl’s Moving Castle, Earwig and the Witch feels like half a story. In a prologue, a woman with fiery red hair leaves a baby on the doorstep of an orphanage. As she rides away on her motorcycle, we see the woman is magical in some way. Cut to the year 1990, when the girl is 10 year old. Her name is Earwig, and she’s a very clever, willful child who has no idea her mother is a witch. Though no prospective foster parent ever selects her, two strange individuals show up one day and say Earwig will “do nicely.”

It turns out these two are Bella Yaga, a witch with blue hair and an angry disposition, and the mysterious Mandrake, a tall and angular demon-looking dude. Bella Yaga immediately puts Earwig to work cleaning up after her many experiments and spells. Earwig hopes one day to learn magic for herself. At the same time, she starts listening to a rock band, called Earwig and the Witch. We know that the band is Bella Yaga, the Mandrake, and her mother, but Earwig doesn’t. 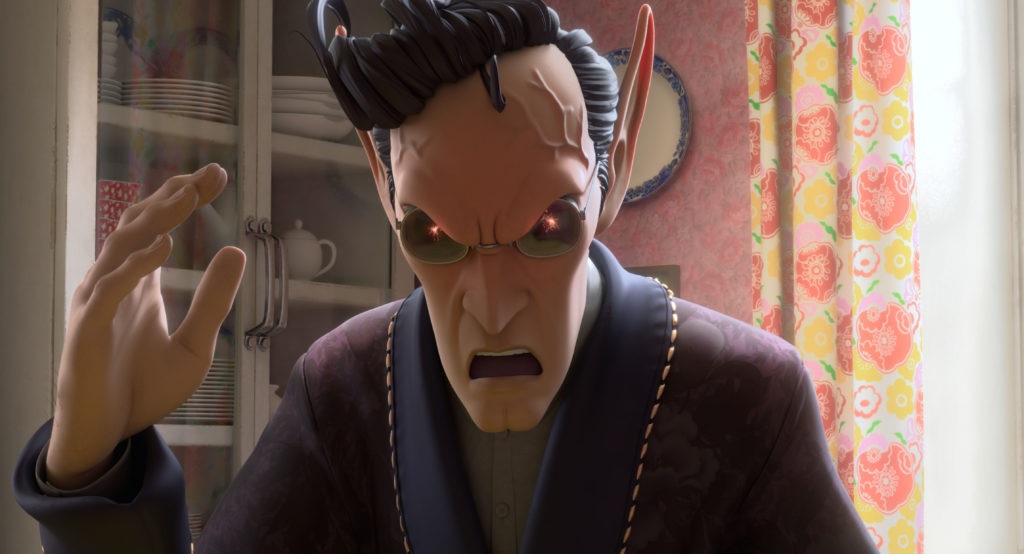 And that’s kind of it. That’s pretty much the entire movie. Earwig has little episodic adventures, sometimes with her friend Custard from the orphanage and sometimes with Thomas the talking magic cat. There’s not a journey of self-discovery; there’s not any kind of strife to overcome, really. It’s just people doing things, and then it ends on a cliffhanger. At 82 minutes, this absolutely feels like there’s more to the story that we just don’t see.

It also doesn’t help that this is all stuff we’ve seen from Studio Ghibli (and Studio Ponoc) before. Young would-be witch making her way in the world with a talking cat is Kiki’s Delivery Service. A young girl made to serve a scary, large witch woman is something from Spirited Away. Earwig lacks both films’ scope, sense of wonderment, and devotion to character. There’s nothing inherently wrong with anything we see here, but it just feels lesser at best. 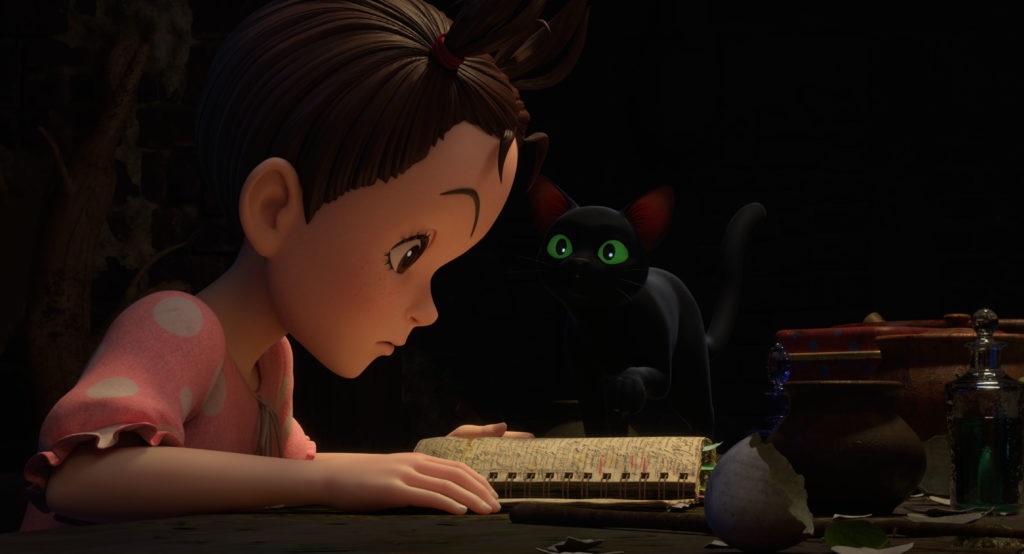 And that leads us to the animation. It’s not as though a specific 2D-style can’t become a gorgeous 3D animated film. Lupin III: The First is an absolutely stunning work which keeps Monkey Punch’s distinct character designs. Earwig keeps the Ghibli-style in almost every aspect. The character models look like Ghibli; the backgrounds and settings definitely do. And when we get a tableau or static shot, it suddenly feels right. But as the studio has spent its whole existence making 2D animation as smooth as possible, it’s a shame that its first 3D feature would have such jerky movement and, at times, uncanny valley-terrifying faces.

It’s a shame across the board. Earwig and the Witch just lacks any kind of magic, none of the spark of the earlier films. For having three dimensions, it seems devoid of depth.

Earwig and the Witch is in theaters now and hits HBO Max on Friday, Feb 5, 2021.