Dinosaur Island was a massive hit in 2018. It blended Michael Crichton and John Williams with worker placement and action selection courtesy of designers Jon Gilmour and Brian Lewis. It’s not really a massive surprise that the people love the messy collision of dinosaurs and theme parks. So now rejoice, for Pandasaurus Games has brought this franchise back with the two player head to head card game Duelosaur Island.

Duelosaur seeks to take the petrifying carcass of its ancestor and strip it down to its essential nutrients. It wants to dig deep into that dinosaur DNA and produce a more slick and efficient game. Again, it’s not really a massive surprise that this little sucker succeeds.

While you’re still building a theme park of dinos and hat stands, everything here is simpler. You build these attractions from a hand of cards, tucking them beneath your player mat. Each offers the option to build a stall of merchandise or maybe a roller coaster of thrills, or a large formerly extinct beast. This multi-use capability adds some nuance to the drafting phase where you select cards from a public offer.

Dinosaurs offer big swings in points as they add excitement to your destination. The excitement track provides a reoccurring stream of VP each round, but is often stalled by a need to buff up security and keep those burly predators in check.

Much of this design is about resource management. You need money to build those physical kiosks and attractions, but you need different strands of both simple and complex DNA to construct the Velociraptors and Tyrannosaurus Rex of the world. 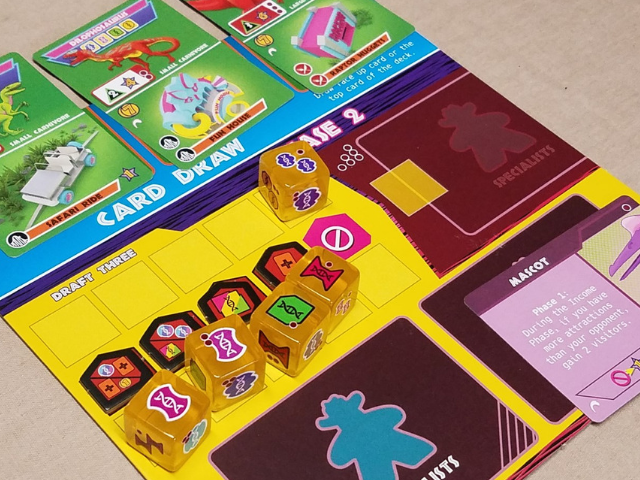 DNA is nabbed through a public drafting of dice. Each of the slick amber cubes are drawn from a bag and rolled by the first player each round. They pair each result with a plot twist token, both the die and token offering a benefit typically consisting of DNA or a security upgrade. The pairing of these two selections offers a bit of an “I split, you choose” feel where the first player determines the sets but the second player chooses first.

The dice selection system is probably the most nuanced and interesting element at play. It’s a simple process–like much of this game–but you need to effectively draft DNA to build the cards you’ve selected as you attempt to eke out more points than your adversary.

There is a bit of a nagging feeling that perhaps you should always just select the combinations that give the most quantity, but the existence of the rarer advanced DNA as well as needing to plan ahead allays this concern to a degree. 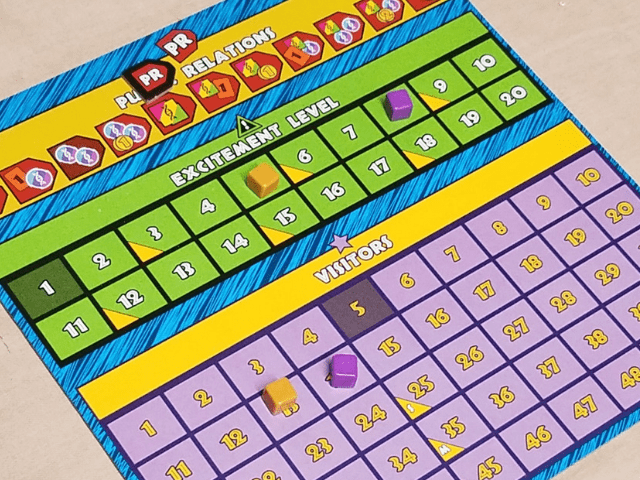 If you have played Dinosaur Island proper you will be surprised at the parallels here. Nothing in Duelosaur works exactly as it does in the previous entry, but each phase and sub-system feels vaguely familiar. As it moves along it continually ticks off boxes such as including specialists and security. Yes, it has its own suite of quirks and sublteties, but it still maintains that signature atmosphere and operates in an identical decision space.

Humorously enough, it also maintains a similar quirk in that length of play can be variable. Make no mistake, this is a pretty short game (30ish minutes), but if you bump the excitement threshold up to the medium or long game settings it still is only marginally longer. This is very similar to Dinosaur in that you’re best off playing the long game every time as you acquire a little more space to operate and see strategies unfold.

The production is also similarly gorgeous in a hideous 80s neon sort of way. Artist Kwanchai Moriya returns offering a stylized and frenetic take on nostalgia, propping up the visuals to a game that’s very reliant on its setting for appeal. Kwanchai’s material is always top shelf and he does not disappoint here. 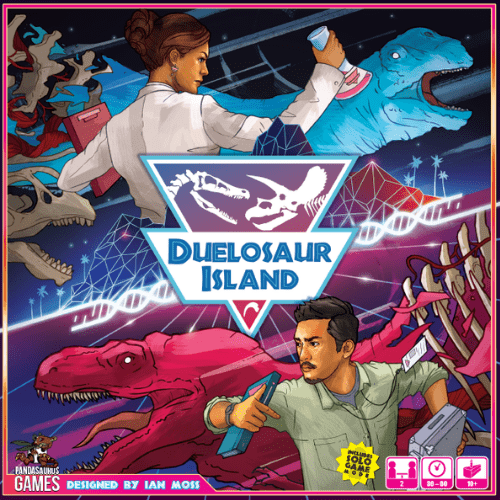 Ultimately this game presents a question: is it a better two player experience than Dinosaur Island? The original has the advantage that you can play with a larger group, but does this new release offer a more substantial or interesting endeavor at this reduced player count? While the degree of improvement is not extraordinary or superlative, it does present a more effective ordeal for pairs that want to craft some artisinal dinos and neon huts. Everything is a bit tighter and the experience more smooth, which keeps the pace lively and engaging.

Designer Ian Moss did a solid job in transitioning a sprawling Euro-style design to a condensed two player card game. It maintains that central spirit which is integral to the game’s success while still offering meaningful decisions and variety. I’m not sure Duelosaur Island has the cultural footprint of Dinosaur to break out from its shadow, but this is a quality design that is easy to table and leaves players with a sense of satisfaction.

Have you played Dinosaur or Duelosaur Island? Let us know in the comments!  And be sure to join host Becca Scott on  Game the Game every Thursday here on Geek & Sundry to watch the best boardgames played with fantastic guests!