Each week here at Geek & Sundry we’re taking a look at new and upcoming exciting titles on Kickstarter! This week’s Kickstarter of the week is Dream Askew/Dream Apart, a pair of indie games RPGs focusing on outsiders. The Kickstarter has exceeded their $11K funding goal as of this writing with $47K in backer funding.

Many tabletop RPGs are about outsiders, be they space crew struggling to get by, mythical creatures secretly living in the modern world, or even adventurers who decide to plunder tombs instead of getting respectable jobs as shepherds or bartenders. There’s a lot of great indie games that focus on outsider stories, two of which are currently raising funds to be published via Kickstarter. Avery Alder, the creator of Monsterhearts, has chosen Dream Askew as her new project, which focuses on how a queer community handles the apocalypse. She’s partnered with Benjamin Rosenbaum to also create Dream Apart, a game about isolated Jewish villages in a fantasy-flavored Eastern Europe. Both games, using the same system, are being published together via this Kickstarter.

“I first released a prototype version of Dream Askew in 2013,” said Avery Alder, “and the next year Benjamin contacted me about using the game engine for his own game of fantastical shtetl life. The games developed in dialogue with one another. Their themes and expressions informed one another. And so this isn’t just a Kickstarter for two different games. It’s a Kickstarter for a book that teaches players how to play these games, presents them both, and also explores how readers can design their own game of belonging outside belonging.”

The game uses a simple system that flows without dice and without a Dungeon Master. Each character role comes with its own set of moves. Some are strong moves, some are weak. Strong moves can only be made when a player has a narrative token which can only be gotten when a player has made a weak move. Strong moves generally pull the narrative into the character’s favor; weak moves make life more complicated. 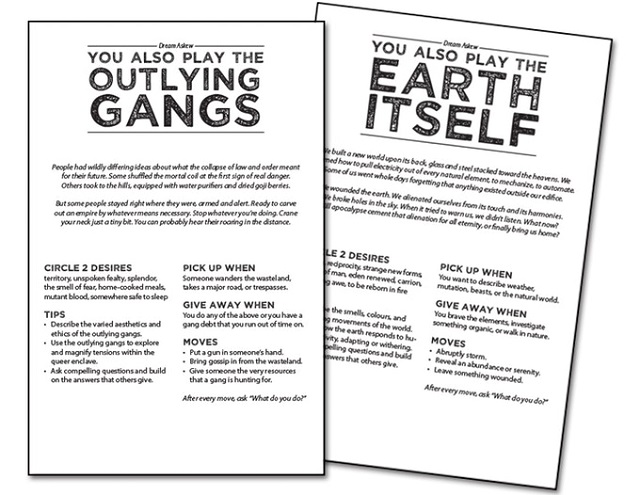 “Dream Askew and Dream Apart both invite players to co-create the community that the story revolves around,” Alder continued, “by filling out a community worksheet together. It’s a collaborative, conversational process. For Dream Askew, players choose 3-5 apocalyptic visuals that define the landscape and structure of the queer enclave, as well as 3 ideological or social positions that are in conflict in the community. For Dream Apart, players choose blessings and curses. Filling out the community worksheet starts with circling choices from lists, but leads into sketching a map and tossing ideas back and forth.”

This Kickstarter offers the usual mix of digital and stretch goals for backers. Alder has learned a lot from running Kickstarters for Monsterhearts.

“One of the biggest things I’ve learned is to keep as much energy as possible focused on the actual project,” said Alder. “When I ran the Kickstarter for the first edition of Monsterhearts, I was excited to offer all the perks, bells, and whistles that I’d seen on other campaigns. There were postcards for each of the character types, glossy posters, custom-designed content, handmade one-of-a-kind zines, and more. It brought in extra money, but it derailed me from the real goal: publishing a great game. I don’t want a part-time job designing and distributing postcards! And so with this Kickstarter, we’ve kept everything streamlined and focused. There are some high-tier rewards and stretch goals, because those are exciting, but we’ve kept them limited to things that we can offer without pulling energy away from the development and publication of the actual games. Because that’s what matters.”

Dream Askew/Dream Apart will be on Kickstarter until June 17th. Fans of focused, diceless roleplaying should definitely check it out.

What Kickstarter RPGs are you backing? Tell us about them in the comments!