When you see Will Ferrell and Julia Louis-Dreyfus are in a movie together, you can expect some laughs. The expectation doubles when you see the movie comes from Nat Faxon and Jim Rash. But Downhill, which premiered at Sundance Sunday night, finds its heart not in humor but in heartache. “Inspired by” the 2015 Swedish film Force Majeure, this is a much weightier movie than it might appear at first blush. It questions what holds families together and what adulthood means in a time of indefinite self-fulfillment. It’s unflinching and uncomfortable. And yes, really funny too.

Louis-Dreyfus and Ferrell play Billie and Pete Stanton, a married couple who’ve gone on a skiing holiday in Austria with their sons. Pete’s father passed away eight months prior and he’s still grieving, looking at his own life and desire to experience it to the fullest. Billie and the kids are supportive, but this probably isn’t their idea of the best time. One afternoon, while seated at an outdoor restaurant, they’re engulfed in snow from a controlled avalanche. It ultimately proves harmless, but they’re all terrified. What’s worse, Billie clutches her children while Pete gets up and runs. Most of the movie is about the family contending with Pete’s actions and what they say about him as a husband and father.

It’s a seemingly innocuous thing, but in what feels life or death, everything changes in an instant. So much of the tension in the movie comes from how Billie and the children look at Pete following the event. At first shaken, then confused, then resentful. And it’s all done with looks and body language. Similarly, Pete’s own growing shame follows an internal path. Both Louis-Dreyfus and Ferrell give masterfully understated performances, but Louis-Dreyfus’ is what grounds the film fully. You might understand Pete’s perspective, but it’s Billie’s we sympathize with.

To make matters more uncomfortable, the supporting players bring the Stantons’ insecurities to the forefront. Miranda Otto plays a concierge at the swanky Austrian hotel (“the Ibiza of the Alps”) who talks openly about free love and who questions Billie on whether she’s satisfied with her marriage. Zach Woods plays Pete’s coworker, on a whirlwind Euro trip with his new girlfriend (Zoe Chao). Pete looks to them as the ideal of what a jet-setting, romance-fueled trip should be. It’s during their impromptu meet-up that Billie and Pete have it out, leading to a tremendous monologue from Louis-Dreyfus. 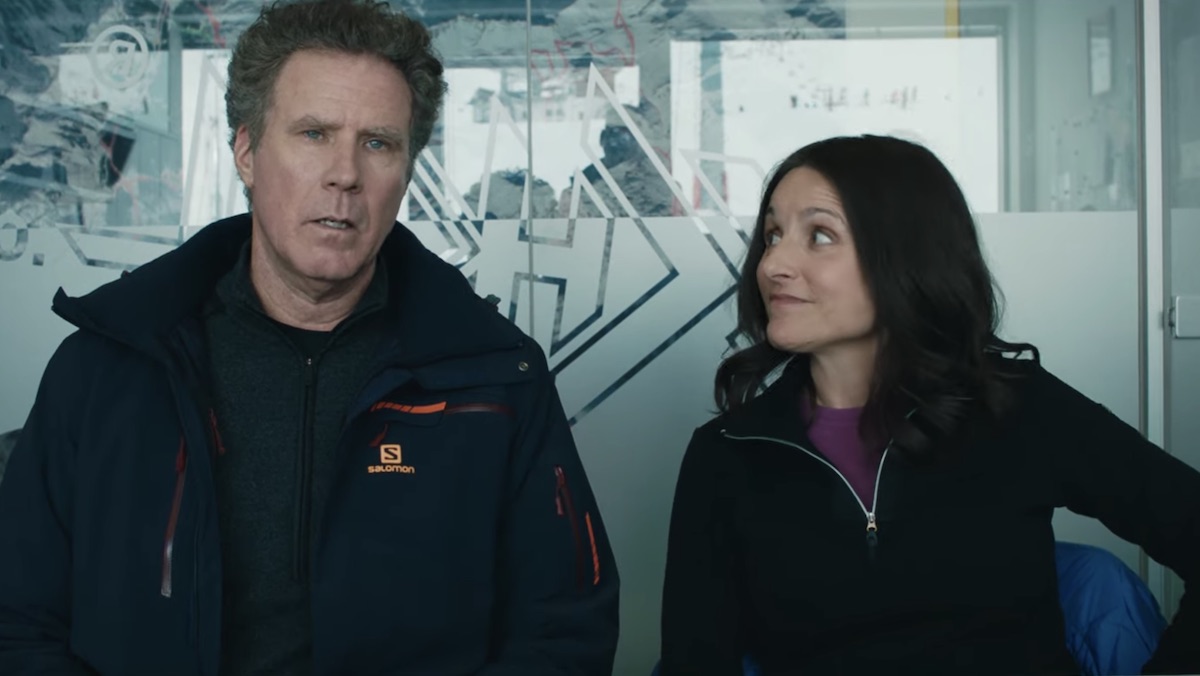 I appreciate Faxon and Rash not going for zaniness at any point in Downhill. It could so easily have gone to a sillier or more over-the-top place. But the impact of the movie is much greater for staying as real as possible with the characters and only heightening the circumstances and situations. Even Otto’s character, who is easily the weirdest, feels realistic and true to herself. I feel like I know Billie and Pete; they’re every set of parents I saw growing up, they’re my own parents. They’re neither of them perfect, and they have to work at it.

Downhill is a brisk movie, but that means there’s no wasted beat or belabored point. We know what we need to know about the characters through action, reaction, or inaction. It’s an uncomfortable movie, but one that feels exceedingly real; not awkward for the sake of it, but because life is awkward. It’s a daily fight, and it can go downhill in an instant.