All Hail DOLEMITE IS MY NAME, One of the Year's Best - Nerdist

All Hail DOLEMITE IS MY NAME, One of the Year’s Best

If you don’t know the name Dolemite, you soon will. One of the most improbably popular film characters of the ’70s, Dolemite—played by comedian/raconteur Rudy Ray Moore—was an icon of Blaxsploitation and a beacon of B-movie ingenuity. But other than maybe catching The Human Tornado or Disco Godfather on TV or stumbling past it on streaming, Moore and his signature character might not have seeped in to your lexicon. But, oh my heavens, whether you know about him or not, I encourage everyone to see Dolemite is My Name, one of the most hilarious, joyous, and uplifting movies I’ve seen all year. Beyond Fest came through again.

A perfect blend of the acting of one of singular voices in comedy, the writers behind Ed Wood and The People Vs. OJ Simpson, and the director of Hustle and Flow, Dolemite is My Name is so much more than just a fictionalized account of the making of a movie. It’s a gorgeous and heartwarming story of a man who made his own opportunities and brought his friends along with him. But, just like Moore’s comedy and movies, it’s also insanely foul-mouthed and vulgar. But in a fun and charming way! This isn’t the kind of movie that surprises, but it definitely paints a sumptuous picture of down-and-dirty filmmaking when the big wigs wouldn’t give you a chance.

Dolemite is My Name is broken up into three distinct sections. The first details Rudy Ray Moore (Eddie Murphy)’s struggle as a lackluster comedian working as the MC in a music nightclub. Already a failed singer, his dream of headlining clubs seems too far off to see. Soon, though, he develops a new persona, the lyrical and bombastic Dolemite, a pimp with audacious stories culled from old-timey street banter. After self-financing several raunchy albums, he finally reaches success, but on a relatively small scale.

The second part features his touring days performing in the “Chitlin’ Circuit,” delighting small clubs and bars with his antics and music-filled stage shows. It’s on this trip that he meets Lady Reed (Da’Vine Joy Randolph), a cheated-on housewife who has nothing but her son. Rudy encourages her to get on stage and do what she’s good at, eventually turning into the equally raunchy Queen Bee. If Murphy’s energy is the soul of Dolemite is My Name, Randolph is unquestionably its heart. 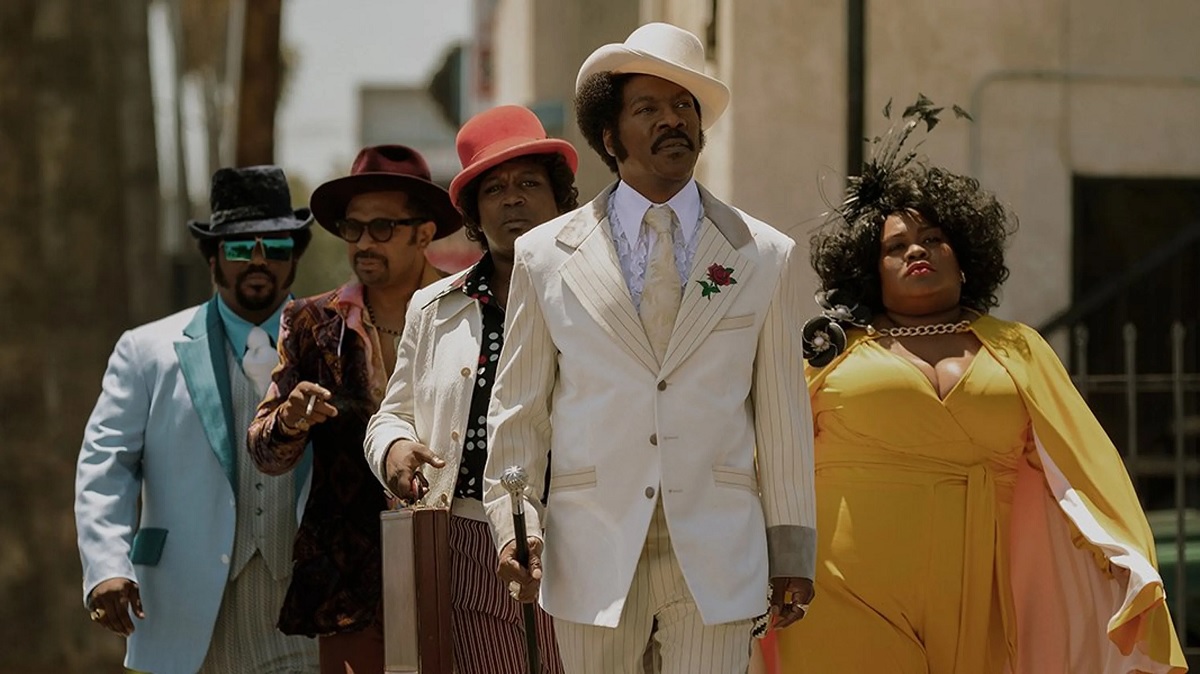 The final, and most prominent, chunk is the making of Rudy’s first movie, Dolemite, a kung-fu-and-sex-filled comedy of crime and revenge. Rudy hires socially conscious playwright Jerry Jones (Keegan-Michael Key) to co-write the script, meant to merge real inner city life with Rudy’s stage persona. On Rudy’s dime, he and his friends (crew) all move in to the dilapidated Dunbar Hotel which houses all of the sets. Eventually, while at a strip club, Rudy approaches the pretentious Hollywood actor D’Urville Martin (Wesley Snipes) about being the movie’s villain, which he only accepts after he’s allowed to direct.

The making of Dolemite is unquestionably the movie’s standout section. If you’ve never seen Dolemite—and dear me, you should—you know it’s not the most polished piece of moviemaking ever. But Murphy’s Rudy is so relentlessly upbeat at even the silliest of bad-movie executions, you can’t help but be on board. Rudy is, by his own admission, a bit too old and overweight to be an action star, but that doesn’t stop him. Why? Because he’s Dolemite, motherf***er! Seeing Rudy take care of his cast and crew, always turning the situation positive with his smile and gentle way is particularly touching. It’s impossible not to like Rudy Ray Moore. 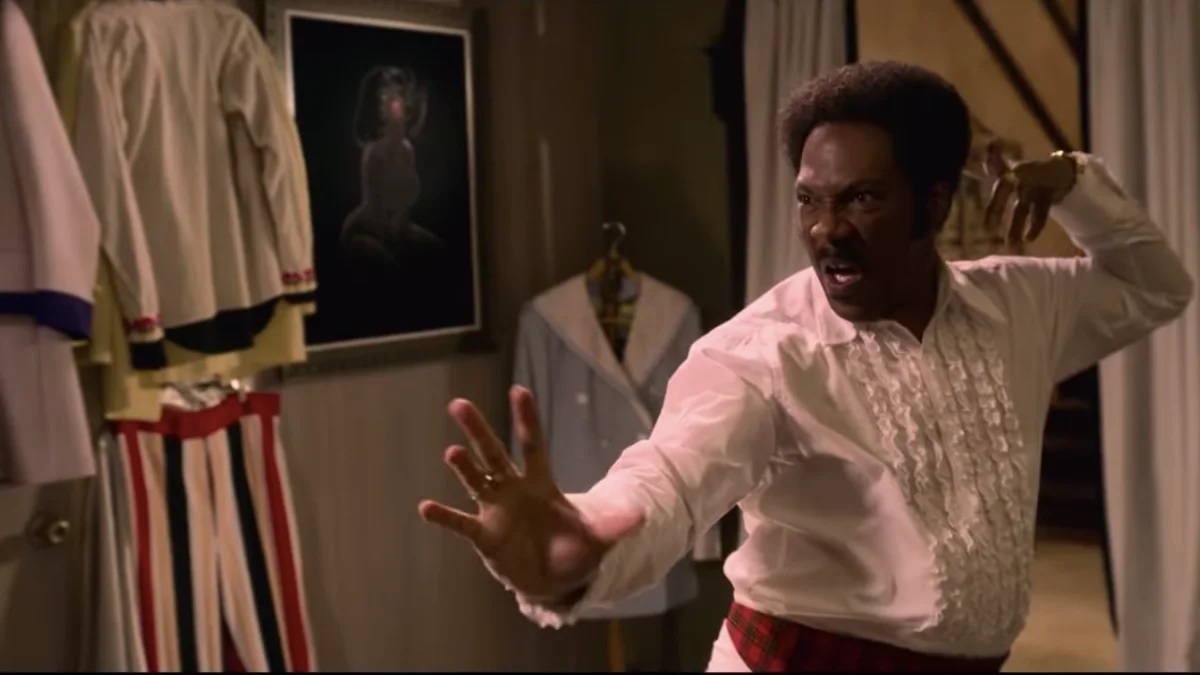 Dolemite is My Name is absolutely of a piece with Ed Wood, the first major script from Scott Alexander and Larry Karaszewski. Both show a passionate, if misguided, creative person with a dream in their heart and stars in their eyes. Granted, Rudy Ray Moore was actually successful for a time while Edward D. Wood Jr. definitely was not, but the idea of people making movies when they have no business to is undeniably an underdog story. It’s tempting to compare it to something more recent like The Disaster Artist; that movie makes fun of its subject while still trying to paint him as sympathetic—or pitiable. We’re with Rudy Ray Moore in Dolemite is My Name from beginning to end. While he’s naive and sometimes overconfident, he’s never outright foolish or laughable in his pursuits.

The entire cast shines from start to finish. Murphy offers a career best performance in a project he and the writers have been trying to make for 15 years. He’s never doing a caricature of Rudy Ray Moore, just playing him as the real person he was, giant persona and all. Flanked by Rudy’s real life crew, played by Craig Robinson, Mike Epps, and Tituss Burgess, Murphy shines and bounces off everyone perfectly. 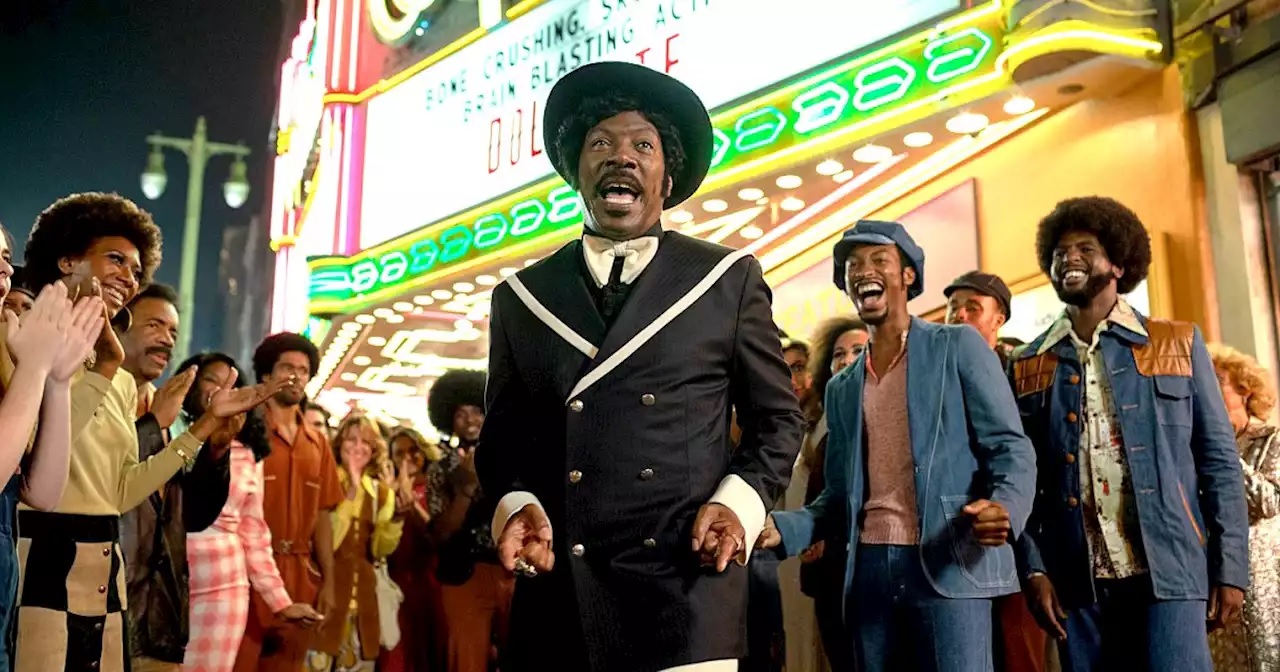 Craig Brewer injects a funky, musical energy to the direction, complementing Moore’s patented patter. It’s no wonder Rudy is considered the Godfather of Rap, given his style of comedy, and Brewer keeps the story moving in the same danceable, rhythmic pace. Much like the making of Dolemite itself, this movie feels like the beautiful melding of everyone involved. You’re not likely to forget this movie anytime soon, nor the unique vision at the center.

Dolemite is My Name is simply one of the best movies of the year and one you’d love to take your grandma to, if not for the wall-to-wall bad language. But even that feels like part of a song. Don’t take offense. It’s just for laughs. It’s just Dolemite. Dolemite is here for you. Dolemite is his name and effing up mothereffers is his game. All hail the Dolemite.

Dolemite is My Name is playing in select theaters and hits Netflix on October 25.