The Most Terrifying Moment in DOCTOR WHO History - Nerdist

The Most Terrifying Moment in DOCTOR WHO History

What is the scariest moment in Doctor Who history?

No, it’s not the Weeping Angels in “Blink.” It’s not the sight of an astronaut slowly transforming into a mutant wasp in 1974’s “The Ark in Space.” It’s not the Abzorbaloff, a mohawked, mostly naked green man who absorbs other people into his body the way a tornado hoovers up cows and barns.

The scariest moment in Doctor Who history, classic or modern, doesn’t even take place onscreen. It’s a Doctor somehow knowing their own specific next self. Grab some jelly babies and find a secure spot in the TARDIS, because this is going to take some unpacking…

That Doctor is the Third Doctor. While Tom Baker’s Fourth Doctor gets the most attention, for my money the arrival of Jon Pertwee’s Third Doctor in January 1970 inaugurated the longest sustained period of creative excellence in the show’s run. The found-family the Doctor formed with the UNIT military team and long-time companions Jo Grant and Sarah Jane Smith leant the show a distinctly British feeling of coziness, as each week they battled sea lizards, department store mannequins and literal demons between cups of tea.

Regeneration has always been a large part of the show’s mythos, and often Doctors regenerate in front of their companions. Jo Grant left the show at the end of the tenth season; she never saw the Third Doctor regenerate into the Fourth. The Doctor, of course, never saw himself regenerate. He “died” at the end of season 11’s “Planet of the Spiders” and sprang back up as Tom Baker, all teeth and scarves and curls. Although some of the other Doctors appeared together in anniversary specials, the Third and Fourth Doctors never met onscreen.

The Scene that Changed Everything

Which makes what I’m about to describe all the more horrifying.

In the twentieth-anniversary special “The Five Doctors” (1983), a black flying triangle kidnaps the First, Second, and Third Doctors, along with several of their companions, and spirits them away to the Doctor’s home planet of Gallifrey where terrible things are afoot. (Because Tom Baker refused to return again so soon after leaving the show, we get some hilarious repurposing of old footage from an unfinished serial that allows him to “appear” onscreen for about three seconds.) 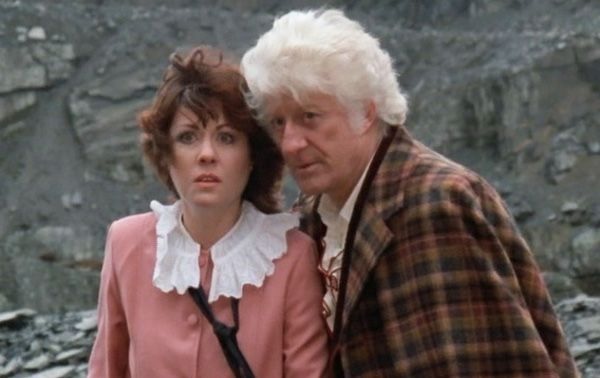 While making her way across the Gallifreyan Death Zone, Sarah Jane stumbles across her old friend the Third Doctor driving his beloved yellow roadster, Bessie. And that is when the horror begins.

Sarah shakes her head slowly. “No, no, it’s not you. You changed, remember? You became all…?”

Now, Three knows Sarah Jane fairly well; they battled Sontarans and low-budget dinosaurs together shortly before his regeneration. But this scene places Three in the odd position of describing his successor, whom he has neither seen nor met. Does he have some kind of prophetic inkling? Had he seen his next face in advance? (Bear in mind that although Sarah Jane has already seen Three regenerate, the Three she encounters in the Death Zone hasn’t yet experienced his own regeneration. For him, it’s still in the future.) Granted, Doctor Who has never stuck firmly to its lore but the one emotion every new Doctor seems to radiate upon regenerating is surprise at who they’ve become.

How Could Three Know Four?

How does one account for the apparent discrepancy? Well, you could handwave it away as a casualty of behind-the-scenes drama; actress Elizabeth Sladen explains on the DVD commentary that “teeth and curls” was initially her line, but Jon Pertwee wanted the laugh. Or you could slowly drive yourself mad pondering the potential ramifications and write your own Who fiction retroactively attempting to justify it. Which is exactly what someone did. 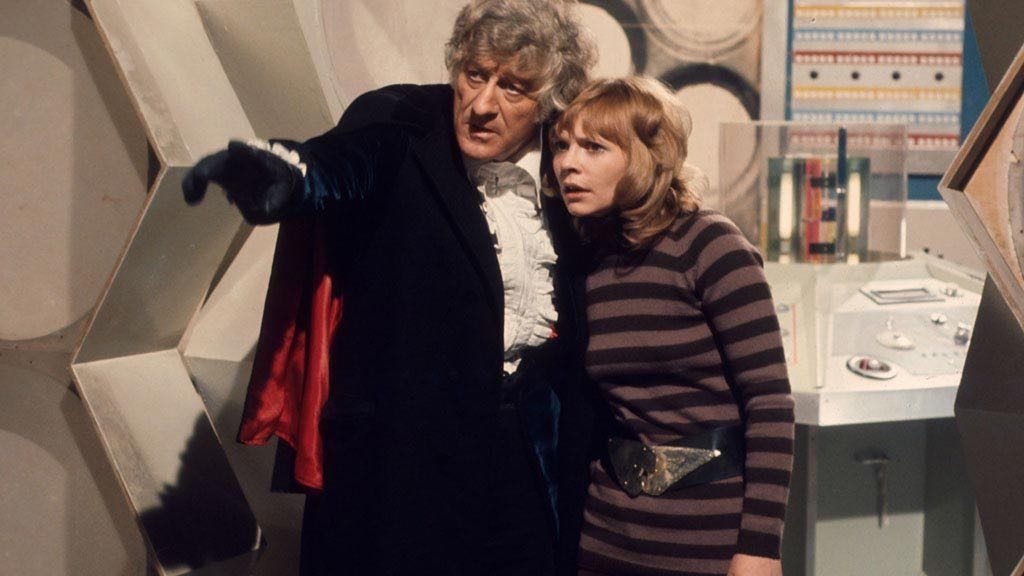 In 2004 Stephen Thatcher wrote a short story, “The Touch of the Nurazh,” in the anthology collection Short Trips: Monsters. The canonical status of these anthology books is… contested, to put it lightly. They’re not as canonical as the TV series or even the Big Finish audio dramas, but they feature works of fiction from acclaimed Who writers like Paul Cornell and generally have the show’s blessing. Over time, fandom may absorb these semi-canonical works and make them part of Who lore.

An Easy Explanation, or a Nightmare in the Making?

“The Touch of the Nurazh” takes place about midway through the Third Doctor era and involves Jo Grant investigating a supernatural murder mystery involving mind parasites that drain all the energy from a planet until it dies. But the real horror begins late in the story when Three falls from a roof. As Jo looks on in alarm, he begins to regenerate. She watches as his old body dissolves and he becomes, not for the last time, Tom Baker. But of course he can’t regenerate yet or he would destroy the show’s continuity, so Three makes a rapid recovery and soon returns to his original white-haired, foppish form.

Later when Jo and Three are discussing their adventure, she confides that she saw him change into another person, all teeth and curls. This rather neatly explains how Three might have been able to describe his successor’s appearance to Sarah Jane in “The Five Doctors.”

But at what cost?

Because of the Implications

What are the implications of Three automatically transitioning into Tom Baker whenever he gets slightly injured? What does it mean that his eventual successor is already lurking inside him, latent? Is Baker just hiding out inside of Pertwee, biding his time, like the zombified bodies hidden inside huge pillars of cotton candy in the movie Killer Klowns from Outer Space? Are all the Doctors inside of each other like Russian nesting dolls? When Four peers into the mad scientist’s machine near the end of “The Brain of Morbius” and sees all the faces of other Doctors, is he just gazing ever more deeply inside his own body?

I had always sort of assumed that a given Doctor could take on any appearance at the moment of death. At least, this is the implication when the Second Doctor regenerates at the end of “The War Games” (the other Time Lords give him a choice of four faces). Twelve similarly explains that he subconsciously chose his appearance because of the Roman he once met in Pompeii. But if this is true, if we accept this roof-tumbling scene as canon, that means Three’s fate was always to turn into Four. Any time Three is hurt or poisoned, badly but not fatally, Four flickers out of him for an instant like a grinning and obscene circus clown. 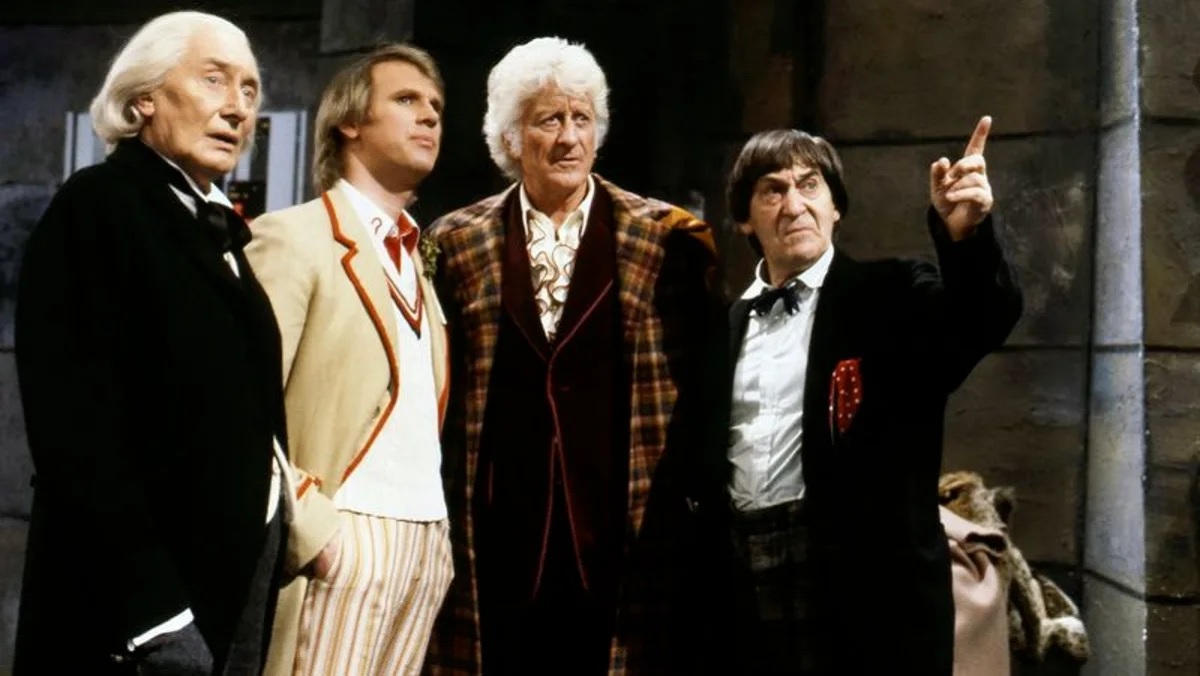 All Time Lords or Just the Doctor?

All of which reinforces that the Doctor isn’t really human, even though they resemble humans. They’re alien, they’re other, but most of the time they’re able to conceal that. It also suggests some troubling things about the Time Lords. If, say, the Master had foreknowledge of an evil incarnation of a fellow Time Lord approaching, he or she could simply kill said Time Lord and wait for the evil one to step forth.

Perhaps there are only so many people nested inside of other people than one frame can take. (Perhaps this is why the Fifth Doctor first appears as a sort of white ghost who enters Four’s body at the moment of death). When we see the Master near the end of “The Deadly Assassin,” he’s approaching the end of his regeneration cycle and looks broken, bloody, faceless, and hideously misshapen. Perhaps this is what Time Lord biology does to a person. Perhaps the strain is too great.

Of course, this is assuming that the people-hiding-inside-of-people is a trait universally shared by all Time Lords. If it turned out that only the Doctor carried future incarnations, it might explain why their reincarnations are typically so fraught and painful, marked by hallucinations and sudden, violent changes in mood, whereas the Master never seems to have any trouble regenerating and Time Lord companion Romana is able to slip in and out of different bodies like old clothes. Perhaps the Doctor’s biology is unique among Time Lords.

The Mysteries of Doctor

Whatever the case, the Jon Pertwee wanting an extra joke led to something truly nightmarish. Now that we know the Doctor has lived dozens (maybe even hundreds?) of extra lives, it’s possible there’s a lot more we don’t know. Is there any chance that we might get these mysteries cleared up in season 13? We can only hope.

Tolkien
A Guide to the Locations THE RINGS OF POWER Has Taken Us So Far
Melissa T. Miller
7 MIN READ

Tolkien
Why Is Theo’s Evil Sword Hilt Important to the Orcs on THE RINGS OF POWER?
Michael Walsh
6 MIN READ

Tolkien
Is THE RINGS OF POWER’s Stranger a Character We’ve Met Before?
Michael Walsh
9 MIN READ