"DIMENSION OF SIGHT & SOUND": A GUIDE TO THE TWILIGHT ZONE - Nerdist

“DIMENSION OF SIGHT & SOUND”: A GUIDE TO THE TWILIGHT ZONE

“There is a fifth dimension beyond that which is known to man. It is a dimension as vast as space and as timeless as infinity. It is the middle ground between light and shadow, between science and superstition, and it lies between the pit of man’s fears and the summit of his knowledge. This is the dimension of imagination. It is an area which we call…The Twilight Zone.”

This was the opening narration that preceded the first episode of Rod Serling’s classic 1959 anthology series, The Twilight Zone. Though the phrasing would change from season to season, the key word has always been “imagination”. Much of contemporary fiction owes a lot to conventions set up by Serling’s original series, giving The Twilight Zone the distinction of being “first” in more ways than one. Much like what The Simpsons did for adult animated comedies (Butters learns this the hard way on South Park), it seems like most science-fiction is a rip-off of an existing, old The Twilight Zone episode anyways. Whether you know it or not, you’re really familiar with The Twilight Zone. A gem of television’s Golden Age, it’s a show that’s bursting with ideas, vision, and taboos, having emerged at a time of peak American vulnerability. Whether it be general post-war anxieties, social issues, or literal aliens, The Twilight Zone captivated and terrified audiences for over five seasons with its brilliant examination of the human condition and the lengths man will go to preserve it. It went on to eventually spawn two less-than-popular television revivals and a feature-length motion picture, but nothing that could match the success of the original series it self.

So if you’re already a fan or previously unacquainted with the best sci-fi show to ever sci-fi, here’s ten of the best episodes worth checking out that’ll give you the full Twilight Zone experience. Then after you’re hooked go back and watch the rest. 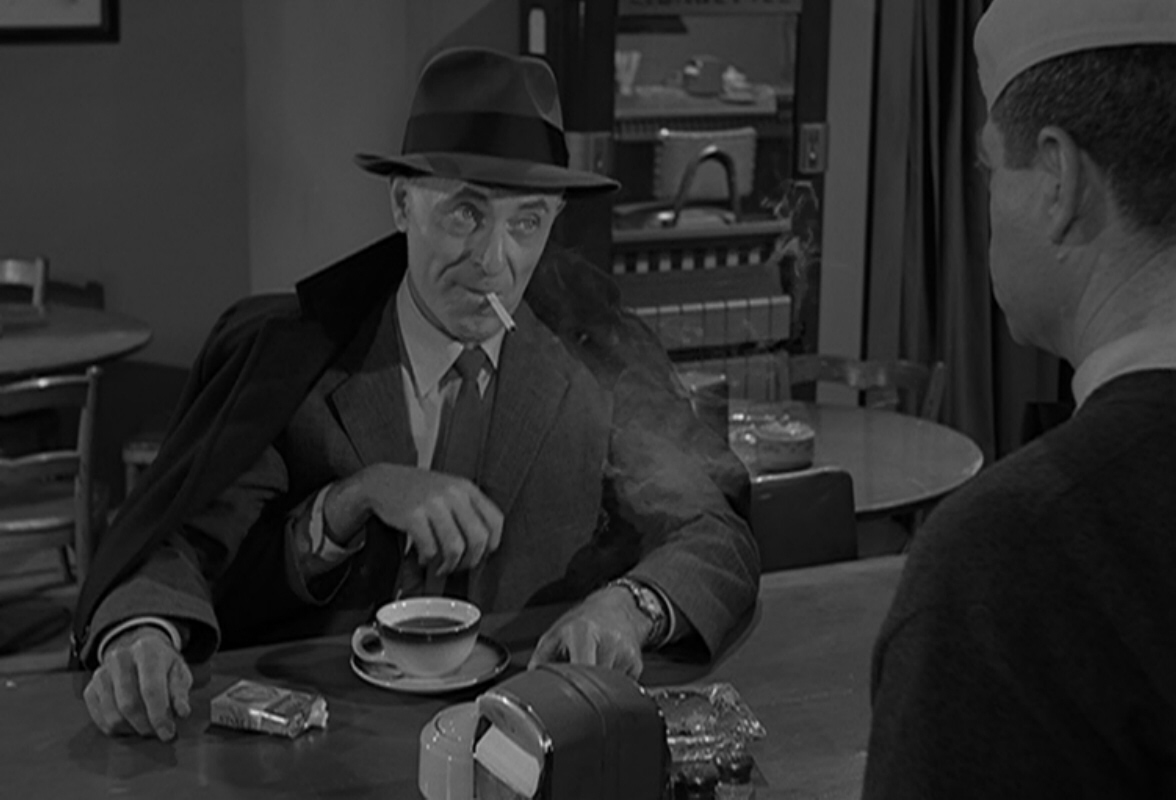 Do you think Eminem is a Twilight Zone fan? Nevermind. A bus driver and his six passengers enter an empty diner and are soon after interrogated by a pair of police officers investigating suspicious activity reported in the night sky. Someone in the diner is not what they seem. Featuring an ensemble of eccentric characters, this episode is as fun as it is disturbing. 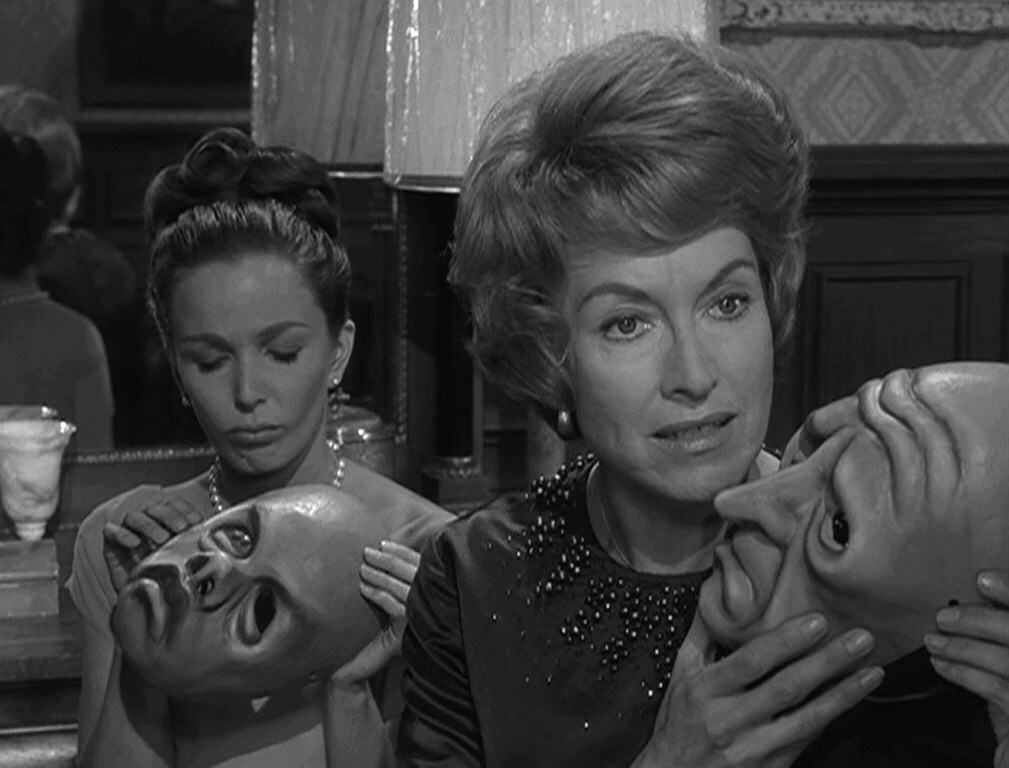 Directed by Ida Lupino, the most fab lady ever to exist, here we have bad things happening to a very unlikeable wealthy family. A near-death millionaire is visited by his vain daughter and her brutish family in his final hours. His last request is that they don a series of ugly masks, a reflection of what he says reveals their true character. The thing is that these masks kind of don’t come off. For all my True Nineties Kids, you’ll recognize this tale as a precursor to the Goosebumps story “The Haunted Mask”…except this is better because it’s just so cruel. 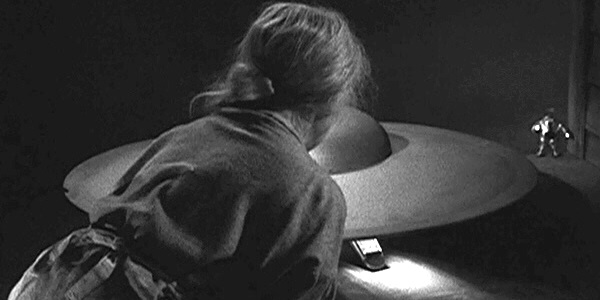 Written by the famed Richard Matheson, this episode is simple in premise: a mute woman (played geniusly by Agnes Moorhead) is being plagued by miniature intruders. It’s set in a non-specific time or place and features no dialogue. The sheer terror this woman faces drives the entire narrative. It’s a triumph in visual storytelling, similar to Reece Shearsmith and Steve Pemberton’s Inside No 9 story “A Quiet Night In”.

That’s it. That’s the episode. 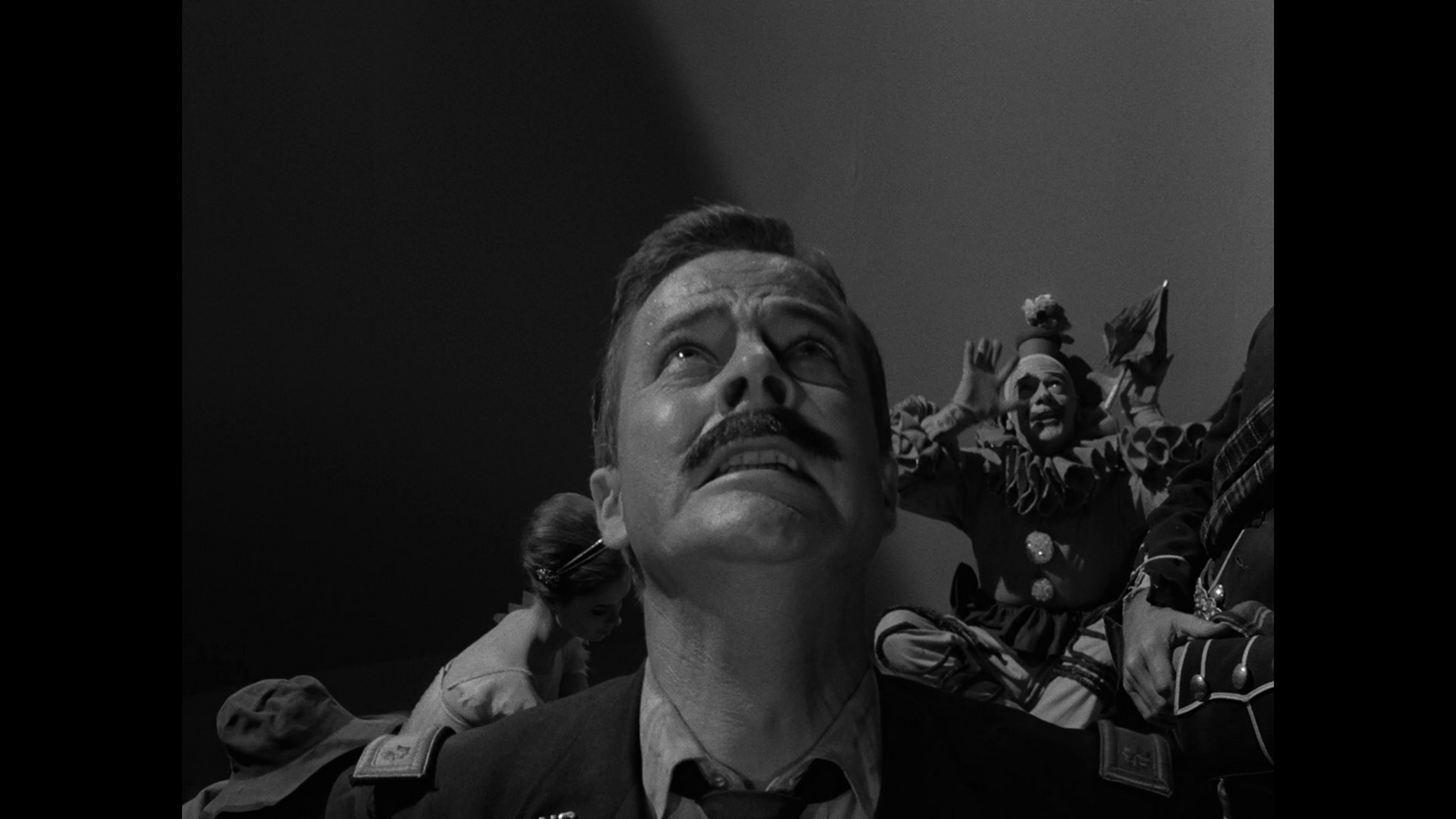 Pretty self-explanatory, no? Emphasis on characters here. We have a clown, a ballerina, a hobo, an Army major, and a bagpipe musician stuck in a room with no doors. Each character plays an archetype, but subverts the psychological expectation of said archetypes. Spoiler alert: the most panicked and desperate character isn’t the “fragile” ballerina….it’s the “stoic” Army major. It’s an episode filled with surprises, one that includes yet another classic Twilight Zone twist. 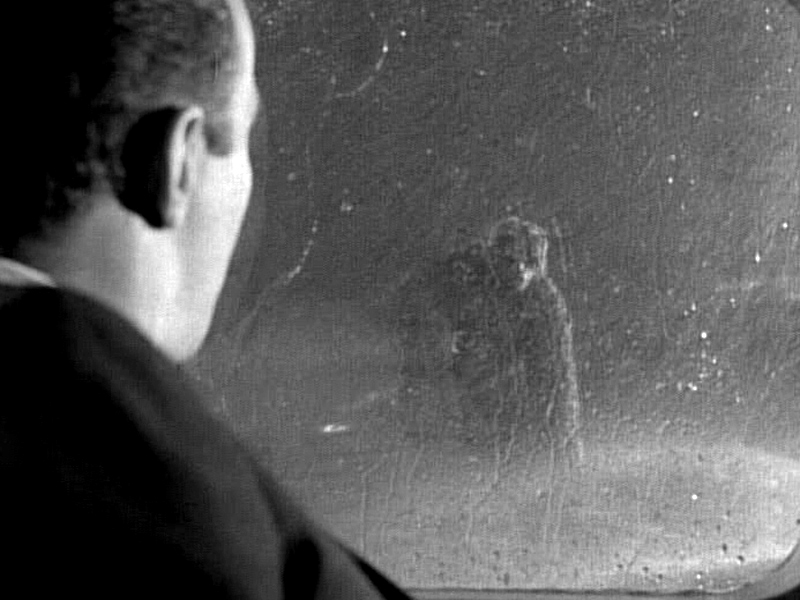 In another Matheson-penned episode, William Shatner stars as a man paralyzed by his fear of flying. Due to having undergone treatment for plane-related anxiety, neither his wife or the airline crew believe him when he claims he’s seen a gremlin pulling out wires from the plane’s wing. Shatner’s performance in the episode is endlessly entertaining and just wild. If not for him, you’ve gotta at least see this one for the cuddly carebear wreaking havoc. Oh, did I mention Richard Donner directed this episode? Yeah, Lethal Weapon, The Goonies, The Omen, etc. Only the best for The Twilight Zone! 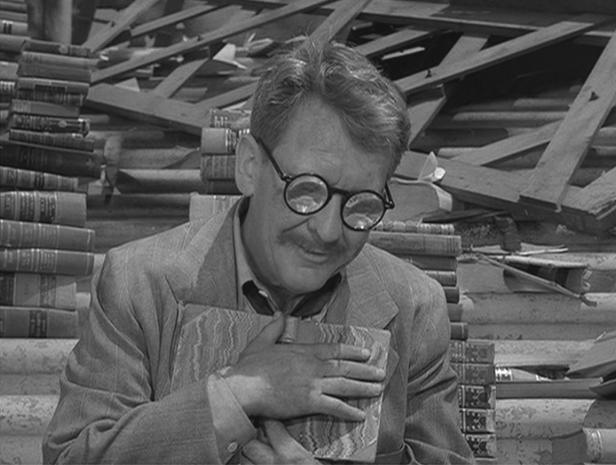 Four-time Twilight Zone veteran Burgess Meredith plays Henry Bemis in the most iconic episode of the series. Bemis is the sole survivor of a nuclear blast who ends up learning the hard way the real meaning of the word solitude and man’s reliance on technology. 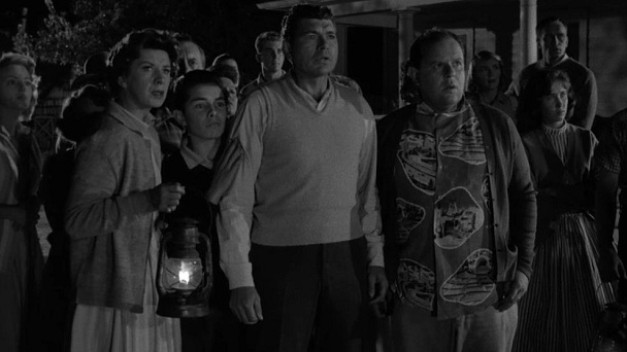 The residents of Maple Street, Anytown, USA, are experiencing a power failure. So naturally they all start to turn on one another, accusing each other of being aliens tampering with the neighborhood’s electricity. It’s a chilling commentary on mob mentalities and the Red Scare paranoia of the fifties. 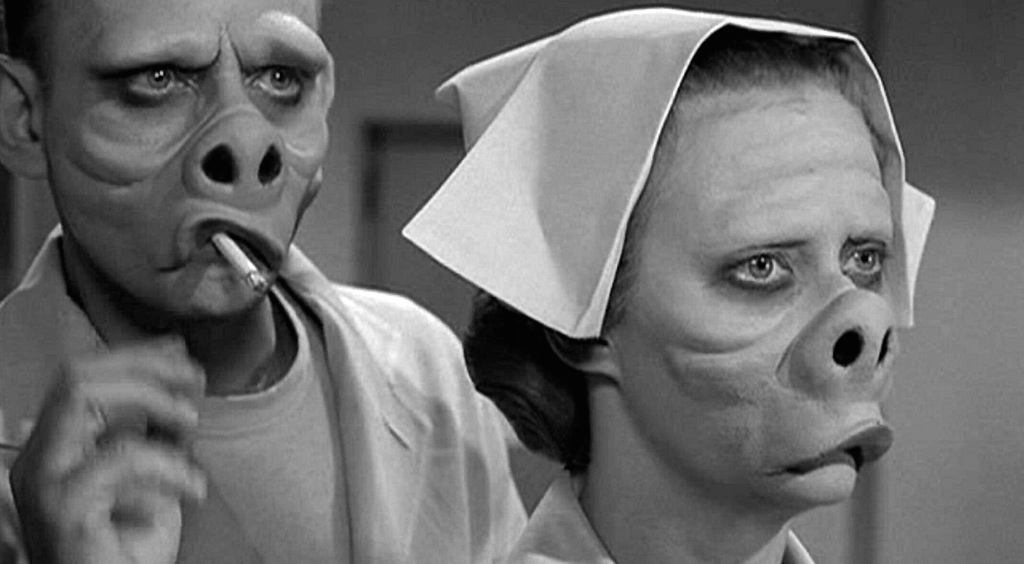 A dystopian take on prejudice and nonconforming beauty standards, Maxine Stuart delivers a tremendous vocal performance as a bandaged woman who is awaiting to see if her eleventh procedure has fixed her “deformity”. The episode’s clever directing techniques (filming characters in shadows or just out of frame) help “Eye of the Beholder” maintain one of the best television twists to date. 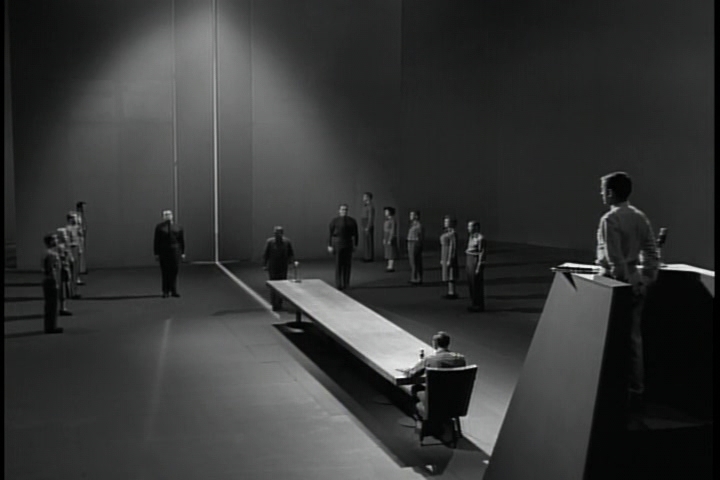 Burgess Meredith’s finest Twilight Zone performance comes in the shape of a former librarian whose totalitarian state deems him and his occupation as obsolete, a crime punishable by death. However he will be the one who has the last word on the matter. “The Obsolete Man” intimately explores the role of government, religion, and free will, in an episode directed by Elliot Silverstein, whose inspiration for the episode traces back to early German expressionist cinema.

What’s your favorite episode of The Twilight Zone? There’s literally hundreds we didn’t mention. Let us know in the comments what we missed!