The road to Samurai Jack’s return was a long one. After the Emmy award-winning show about the eponymous, time-displaced samurai and his immortal enemy Aku went off the air in 2004, many thought it would never return. A movie to wrap up the storyline was talked about and attempted by four different studios over the years, but nothing ever came of it. Then, in 2017, a fifth and final season was produced and the fans rejoiced. Now, publisher Project Raygun is capitalizing on Jack’s renewed success with Samurai Jack: Back to the Past.

Taking place during the events of the final season, Back to the Past tells the story of Jack on the move towards his final battle with Aku. As he passes through Aku’s corrupted lands, he will need the support of his allies, not only to fight his enemies, but to help him deal with his own internal demons. You play as one of Jack’s allies, taken from throughout the show’s history, moving alongside Jack and collecting support for the battles to come. 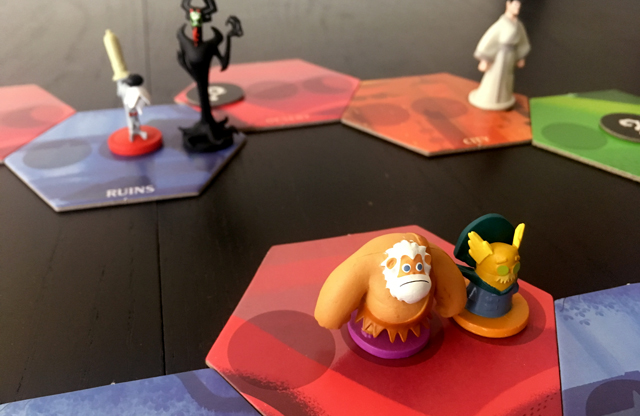 Each round will have you randomly setting up the path that you, Jack, and Aku will travel. For the first two rounds the path ends with one of Jack’s villainous lieutenants, and on the third will be Aku himself. On each turn Jack will move forward to a random space on the track, then each player will select a movement card matching on of the five terrain tiles. Whoever is the farthest back on the path moves first and fills up one of the three spaces on the tile, potentially gaining a bonus if you land on the same space as Jack. Then Aku moves to a random space, and hopefully it’s not yours. After this, starting with the farthest forward character, each player draws a Support card from the location matching their tile. That is, unless Aku is in your space, in which case you get nothing and are flung into a portal, forcing you to randomly select your next move. 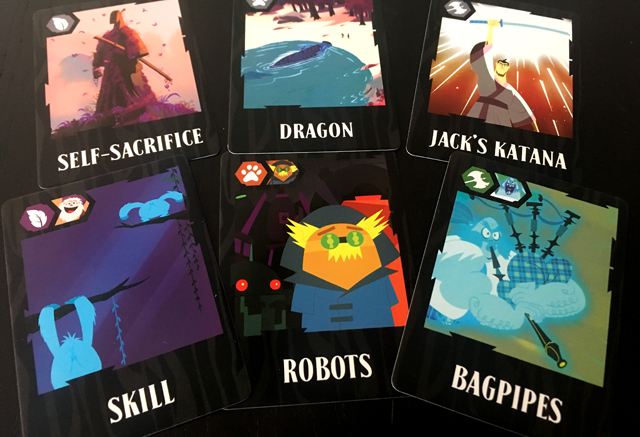 This is a problem because you need those support cards to fight those villains and gain the honor points you need to win the game. And yes, despite ostensibly working together towards defeating Aku, this is not a cooperative game. When you reach a villain you’ll choose one of the spaces on their card, so long as you have the right support cards to face them. If you do, discard the cards, gain the honor points listed, and leave your character token on the card. No other players will be able to claim this space, meaning it’s in your best interest to get there first. Of course, if you get there too early you won’t necessarily have enough cards to claim the higher level spots. Then again, if you go too slowly, Aku might beat you there and take the last spot available. This push-your-luck balance is the heart of the game, and is where the real strategy comes in. 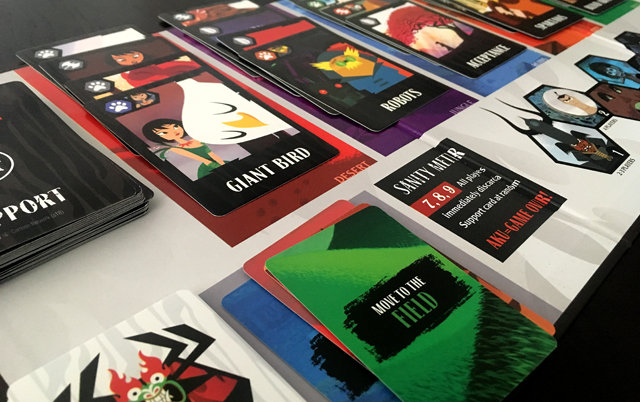 Of course, you can’t be entirely selfish. See, Jack has had a really hard time in the future. Surviving in such harsh conditions these past fifty years has taken a toll on his mind, and every turn he goes without an ally at his side or with Aku in his face has a harmful effect on his sanity. As it drops down it will affect you too, forcing all players to lose Support cards or, if it reaches the end, causing the game to end with everyone losing. In order to keep his sanity from dropping someone will have to end their turn in the same space as Jack, and if two people do so, Aku won’t be able to join in. Of course, doing so might mean not getting the exact cards that you need, or not moving forward ahead of the other players. These are the decisions that keep the game interesting and keep it from being too aggressive. 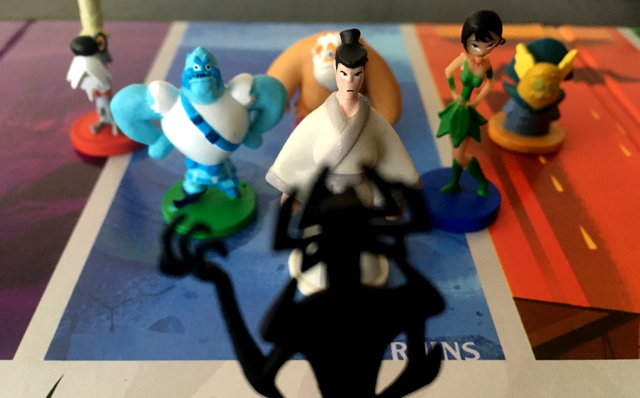 If you’re a fan of the show and are looking for a light, quick, push your luck game, you could do a lot worse than Samurai Jack: Back to the Past. The mechanics are clean, the gameplay is snappy, and the art direction is on point. The cards are filled with art from the show and I haven’t even mentioned how much I like the miniatures. Honestly, these figures are good enough to keep on display, which I just might have to do. When they’re not being used during the game, anyway.

Check out Becca’s How To Play video for Samurai Jack: Back To The Past and stay tuned for tomorrow’s Game the Game, where Becca will be playing this game with fantastic guests!