If you had the power to murder someone with a single stroke of a pen, would you do it? If you said, “yes” then slow your roll, buddyâ€”you might want to rethink your stance, especially after watchingÂ Netflix’sÂ Death Note. The American live-action adaptation of the hit anime and manga series is coming to Netflix later this year, and we have our first teaser trailer for what’s in store. Spoiler alert: it involves teens, overwhelming moral dilemmas, murders most foul, and a creepier-than-usual Willem Dafoe.Based on the mega-popular Japanese manga by Takeshi Obata and Tsugumi Ohba,Â Death Note tells the story of a high schooler Light Turner (Nat Wolff) who discovers a notebook with supernatural powers: anyone who’s name is written inside, if the owner is picturing his or her face, will die. To paraphrase Kanye West, no one man should have all that power, especially a high school student. Naturally, the power goes to his head and he goes on a megalomaniacal murder spree, declaring himself judge, jury, and executioner. It’s up to local police and a brilliant young detective named L (Lakeith Stanfield) to track Light down and stop him before it’s too late.

Perhaps the biggest indication that this is a work of fantasy is that you see a teenager actually writing in a physical notebook rather than some sort of electronic device. Then again,Â Death Note probably wouldn’t pack as much of a punch if it was about an arrogant high schooler who discovered a haunted Tumblr.The trailer ends with Willem Dafoe’s craggy voice, off-screen, asking Light, “Shall we begin?” While just the sound of his demonic rumble is enough to send a shiver up my spine, the prospect of seeing Dafoe–a man who has resting gremlin face alreadyâ€”as the shinigami (a.k.a. death god) Ryuk, who looks like this: 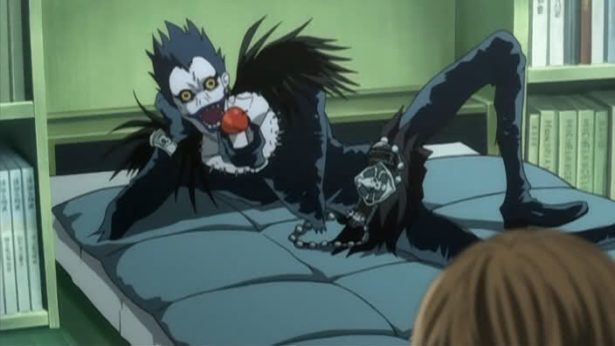 While there have been multiple live-action adaptations in Japan, this film is the first American live action adaptation.Â Blair Witch director Adam Wingard is helming the project, which will relocate from the mean streets of Tokyo to the plaid, bearded streets of Seattle. Rather than Light Yagami, Nat Wolff stars as Light Turner, the reclusive teenager who finds the titular Death Note. He will be joined by Lakeith Stanfield (Get Out,Â Atlanta) as Light’s archnemesis, the renowned detective L, who will hopefully still have a giant sweet tooth; and Margaret Qualley (The Leftovers) will portray Mia Sutton, Light’s friend and confidante, a twist on Misa Amane from the original series.

Yet this adaptation has not been without its share of controversy. Much likeÂ Ghost in the Shell,Â the casting ofÂ Death Note has been the subject of whitewashing accusations due to the fact that both its lead actor and actress are now white characters. In the anime and manga, Light and Misa (now renamed Mia) were both Japanese, and changing their race has upset many fans of the franchise who view the casting as erasing an essential part of its source material. There are so many talented Asian actors in Hollywood that it seems unnecessary, outmoded, and more than a little insulting to rewrite these characters to be white. While Wolff and Qualley are certainly talented in their own right, it isÂ part of a larger, systemic issue that needs to be addressed. Perhaps Viola Davis said it best in her Emmy acceptance speech: “You cannot win an Emmy for roles that are simply not there.”Death NoteÂ comes to Netflix later this year. Whether or not audiences follow remains to be seen.Are you excited for the live-action American adaptation ofÂ Death Note? What from the anime do you hope to see? Let us know in the comments below.

Dan CaseyÂ is the senior editor of Nerdist and the author of books about Star Wars and the Avengers. Follow him on Twitter and ask him about all things animeÂ (@Osteoferocious).

The 11 best anime for beginners: