An Ode to David Lynch’s Oscar Campaign for Laura Dern

Awards campaigning is a weird thing. It’s an elaborate game for actors, where fuss and promenade function as self-promotion. The goal? To take home a golden trophy. And to forever carry that most esteemed title: Oscar winner. It’s a title that carries leverage in Hollywood. Oscar winners not only get the bragging rights. They get power, salary boosts, the ability to be choosier about roles, and industry respect. But at what cost?

Oscar-winning performances rarely reflect the best acting of the year, if such a thing can even be determined. And in that way, campaigning often feels like a political move. And a costly one at that. According to Variety, studios shell out upwards of $30 million these days on Oscar campaigns for their films. It’s a move that puts independent films and smaller-budget projects at a disadvantage. So what can those studios do when it comes time to promote their performers for Oscars? They can pay attention to David Lynch, for starters.

Back in 2006, Lynch had just released his experimental, surrealist, 2+ hour-long film Inland Empire. Like his previous masterpiece Mulholland Drive, it was also named after a location related to Los Angeles. The film stars Laura Dern as an actress named Nikki Grace who slowly descends into a strange inner world as she takes on the personality of a character she plays in a film. It’s perhaps the strangest film in Lynch’s oeuvre; he made it without a completed script, shot in low-resolution on a Sony camcorder, and as an international co-production between the United States, France, and Poland.

Inland Empire was never going to be an awards darling. It’s too amorphous, baroque, strange; the opening segment features a TV show about family of anthropomorphic rabbits who speak in cryptic questions. The low-fi quality is far from the polished, prestige cinematography the Academy usually eats up. But at the center of Inland Empire is a performance that demands attention. Laura Dern is exquisite as Nikki Grace, a “woman in trouble,” as Lynch describes the film. Lynch and Dern are long-term collaborators, having first worked together on Blue Velvet back in 1986. Inland Empire feels like a love letter to the actress, who wasn’t yet an Oscar winner. 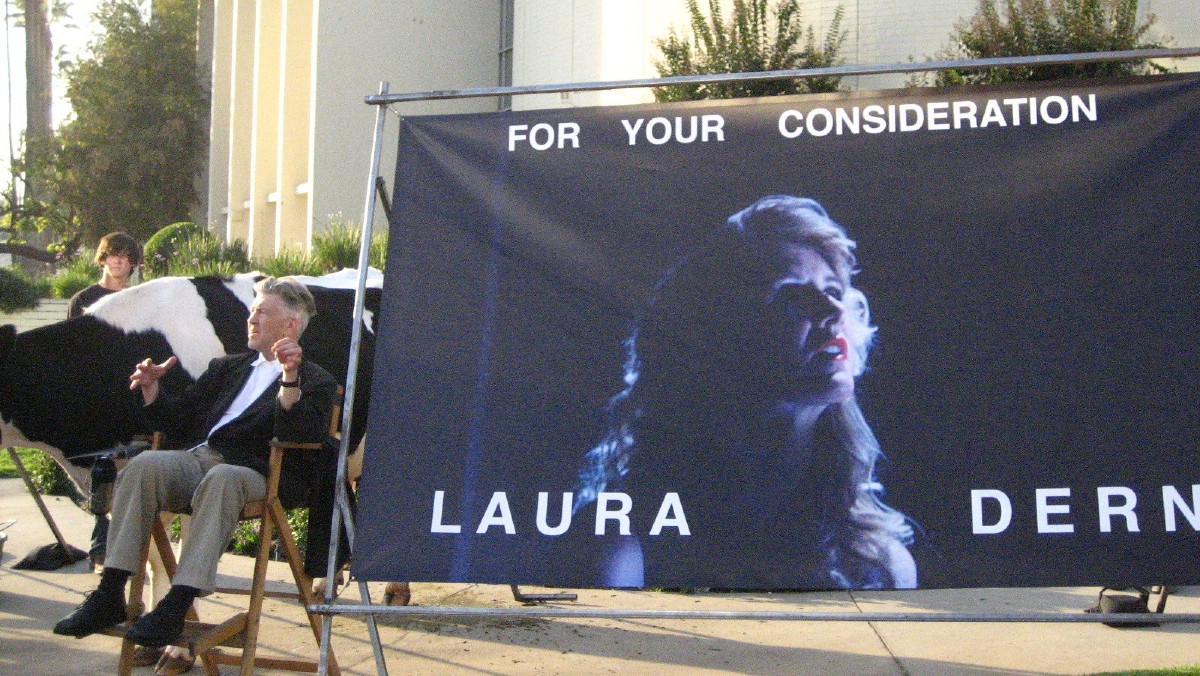 Knowing he had something special on his hands, and also knowing he had no budget for a proper awards campaign, David Lynch did what David Lynch does. He took a unique approach. Instead of playing the normal Oscar campaign game, he parked himself on the corner of Hollywood Boulevard and La Brea in Los Angeles on December 13, 2006. In tow, he had a large poster of Dern as she appears in Inland Empire, with the words, “For your consideration, Laura Dern,” printed against a blue background. He also brought along a cow, with an additional sign that read, “Without cheese, there wouldn’t be an Inland Empire.” 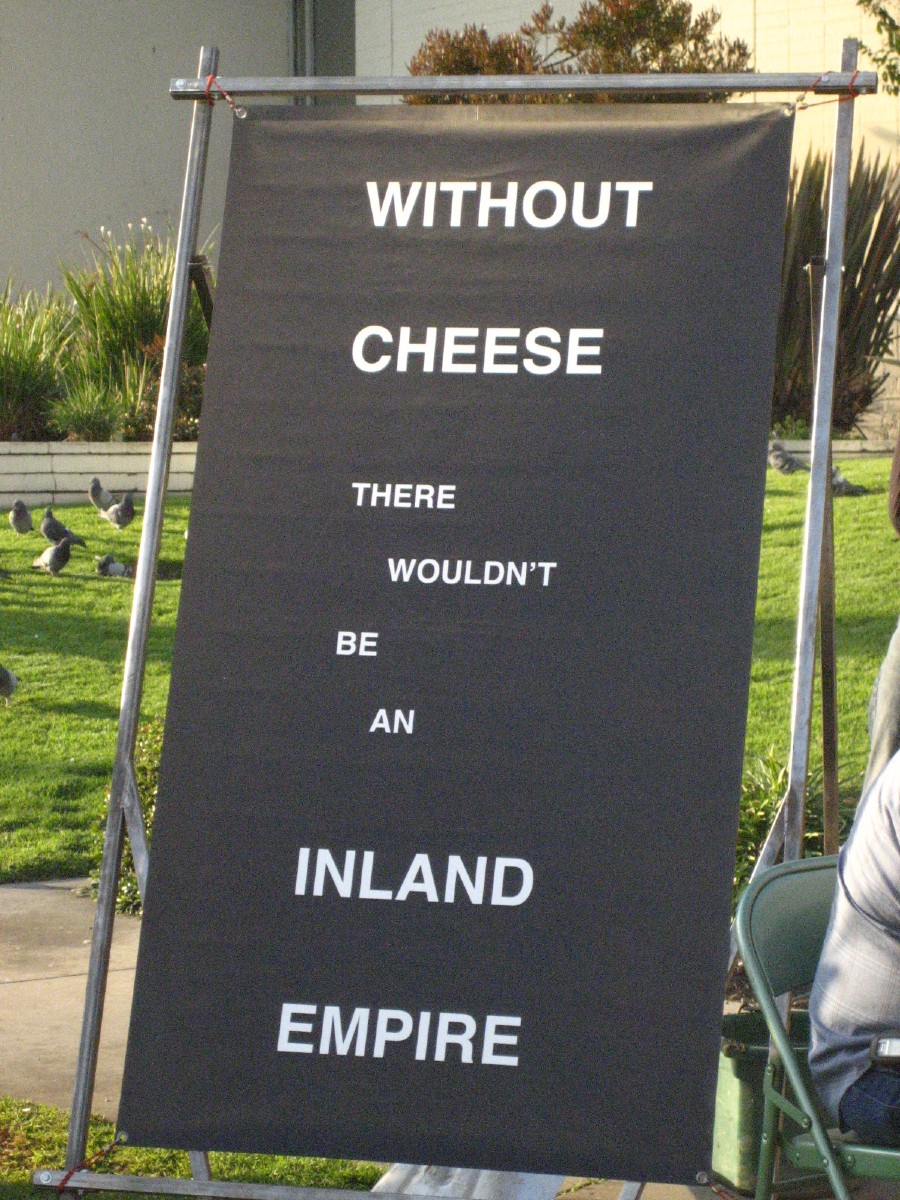 For the better part of a day, Lynch sat in this exact location. He met with fans, who pulled over to take pictures with the esteemed director. (Though he’s never won a competition Oscar himself, Lynch has been nominated for Best Director three times: for The Elephant Man, Blue Velvet, and Mulholland Drive. He received an Honorary Academy Award for his body of work in 2019.) He spoke about the campaign with Wired back in 2006.

“You know, there are a bunch of Academy members and all sorts of other awards activity going on out there. And people solve problems with money normally; well, I don’t have any money. And I also feel that the Academy members must be sick of seeing ad after ad after ad costing a fortune with no one really paying attention. Honestly, I’m out there with the cow, and meeting the greatest bunch of people. The other day, we had my friend (director of USC’s Polish Music Center) Marek Zebrowski out there playing piano. It was so beautiful, such a great day, out with Georgia the cow, beautiful piano music, meeting so many great people.”

The memory of that day lives on in fan photos and videos. In the clip below, we see a couple of excited guys named Nate and Matt, who randomly stumbled on the sight and documented the event. When one of them asks about the cheese sign, Lynch explains, “Cheese is made from milk. You get it?” They didn’t.

To the best of my recollection, there are no references to cows or cheese in Inland Empire. But in a separate video interview, Lynch explained the whole thing a little more. Georgia the cow is actually his neighbor. “I don’t know what it is, we have a connection. She’s like family to me,” he says in the video, although it’s unclear if he’s talking about Georgia or Laura Dern. He seems to allude that the cow campaign was part of a dream.

Other reports from that fabled day in December explain things a little more. When someone else asked about the cheese correlation, Lynch simply replied, “I ate a lot of cheese during the making of Inland Empire.” He also stated, “I’m here to promote Laura Dern who I think you’ll agree gave an incredible performance that’s going to live. I think the Academy members love showbusiness—and this is the showbusiness approach.” 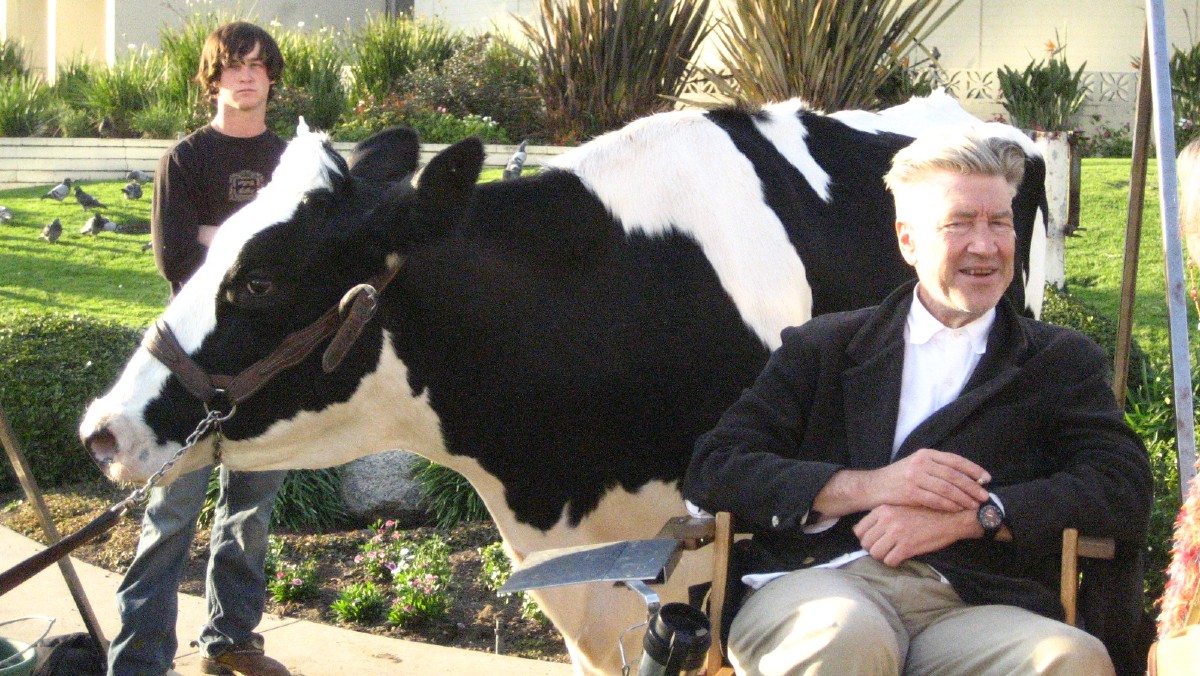 Laura Dern did not receive an Oscar nomination for Inland Empire, despite David Lynch’s best efforts. She did, however, finally earn the moniker “Oscar winner” for Best Supporting Actress in Marriage Story in 2020. For that win, she took the more standard campaign approach, appearing at luncheons and roundtables and in magazines. Sometimes, unfortunately, you do have to play the game. Still, Lynch seemed on to something. Even if his day in the sun garnered no nominations or wins, it was a proper condemnation of silliness and money that goes into these things. He didn’t net his star an Oscar, but he did enjoy some quality time with Georgia the cow and his fans. And that’s priceless.