It was a question blazed on every bus bench, billboard, and TV ad in the summer of 1990, accompanied only by a mysterious silhouette of a man in a trench coat and fedora, his face covered in rags. It wouldn’t be until late August that audiences would learn the answer to that question: Darkman was Sam Raimi’s first dip into the world of big-studio superhero movies, and one of the grimmest the genre would ever see.

Three decades on, it’s worthwhile to celebrate Darkman’ s 30th anniversary (Darkmanniversary?) by digging into how it paid homage to the Universal monsters of old and paved the way for Raimi’s future superhero success with Spider-Man. 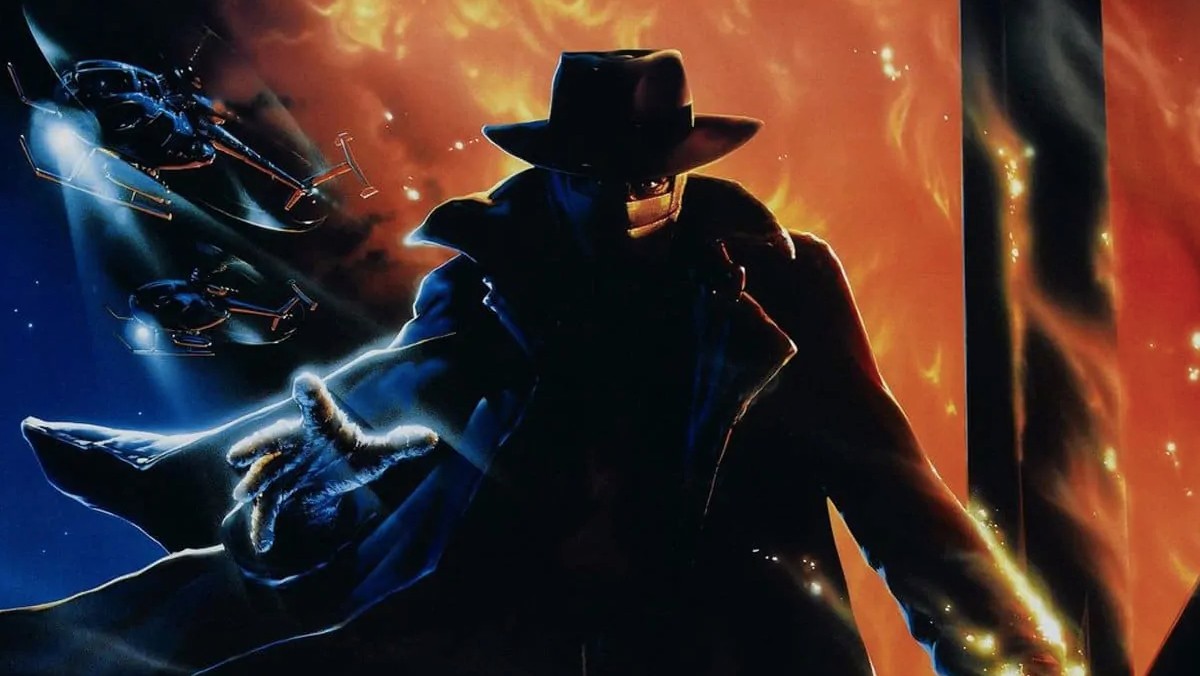 The origins of Darkman

Imagine Batman with the gonzo energy of Evil Dead and a heaping helping of influence from the Universal monster canon, and you’ve got an idea of the darkly Gothic world Darkman dabbles in. Fresh off the success of Evil Dead II (and the runaway success of Tim Burton’s Batman in ‘89), Raimi was ready to make his first superhero movie. But after failing to acquire the rights for Batman or 1930s radio-drama superhero The Shadow, he instead set out to make his own.

Enter Dr. Peyton Westlake (a young, pre- Schindler’s List Liam Neeson), a wholesome, mild-mannered scientist with the kind of name that wouldn’t be out of place in the ‘30s pulp novels from which Darkman takes stylistic inspiration. He’s got it all: good looks; a sweet, hard-working attorney girlfriend named Julie (Frances McDormand); and he’s just about cracked the formula for creating synthetic skin to aid in treating burn victims. But just as he figures out why his samples are dissolving after 99 minutes (they need to stay in the dark), he’s ambushed, disfigured, and burned alive by mob boss Robert Durant (a searing Larry Drake), seeking a MacGuffin-esque memo Julie has hidden with him that exposes the criminal activities of sleazy industrialist Starck (Colin Friels).

If that weren’t grisly enough, the still-living Peyton (left for dead with burns on over 40% of his body) receives experimental treatments that sever his nerves from his spine; he no longer feels pain, but he can’t feel anything else either. What’s more, the effect supercharges his adrenaline and leaves him half-mad, subject to intense fits of rage. Luckily, he manages to rebuild his skin-growing lab in a suitably Gothic abandoned factory (complete with a stray cat friend!), and sets about taking revenge on the mobsters who did this to him, all while hoping to reclaim his old face and his life with Julie, who thinks him dead along with the rest of the world. 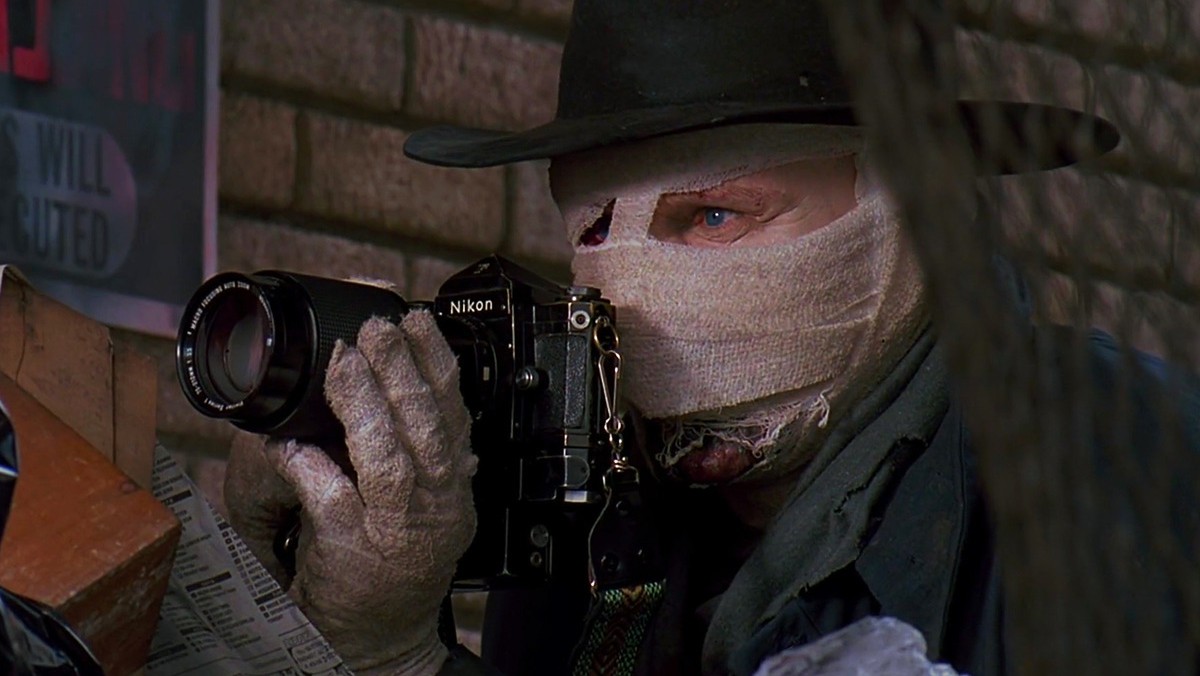 It’s a tale plucking inspiration from everything from The Phantom of the Opera to The Invisible Man to The Hunchback of Notre Dame. He’s a disfigured by tragedy, forced to watch the world (and his love) go on without him, who takes that loss out on the people who wronged him. That he becomes an erstwhile crimefighter is almost incidental; his primary motivator, apart from restoring his life with Julie, is revenge.

Both in aesthetics and approach, Darkman feels like the perfect synthesis of Raimi’s old-school horror background and his eventual establishment of the rhythms of modern superhero filmmaking. Imagine the infamous “Doc Ock is reborn” scene from Spider-Man 2–with its Dutch angles, crash zooms, and whirling-dervish editing–stretched over 100 minutes, and you’ve got an inkling of the film’s dark, pulpy mood. Raimi delights in pulling out those same dynamic camera tricks for every inch of Darkman’s over-the-top milieu. Raimi even makes room to include, as always, his brother Ted (who plays one of Durant’s sniveling henchman) and perennial muse Bruce Campbell (a wordless cameo in the final shot, credited as “Final Shemp”).

Much of the gritty pizzazz of Darkman can be laid at the feet of Bill Pope, in his feature debut as a cinematographer. (He’d go on to work on the Matrix films and most of Raimi’s filmography, including Spideys 2 and 3). Pope immediately gets Raimi’s sense of visual dynamism: he mounts cameras on machine guns hidden inside false legs. He pans across supply cabinets so he can smash Neeson’s face through panes of glass right at the screen. Film noir slivers of light capture Peyton’s wild eyes in every dark crevice of his laboratory.

Like many of the colorful old-school comic book films of the time (Dick Tracy, The Shadow), Darkman wants to recreate the visual pop of its source material and comes closer to replicating it than most of its peers. 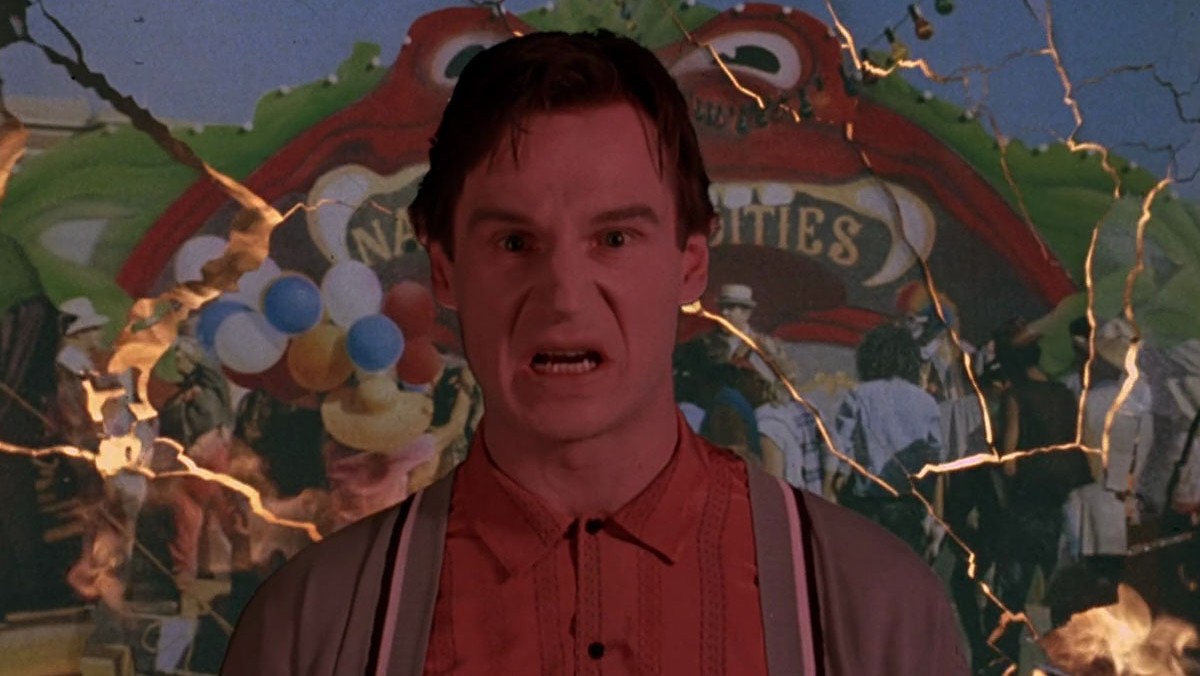 Peyton Westlake is a tragic figure

The cast is absolutely game for their roles, especially Neeson; he plays Peyton as an operatic madman both in and out of Tony Gardner and Larry Hamlin’s grotesque, lipless creature effects for Peyton’s melted face. McDormand makes the most out of the stock love-interest role, and Drake makes for a menacing heavy in Durant.

Most interesting is the acting challenge inherent in Darkman’s main gimmick: he can use his skin-printing technology to 3D-print the face of anyone he wants and imitate them. He makes delicious use of this trick in the film’s middle act, pitting Durant’s associates against each other, and even impersonating Durant himself. This leads to fun shots like two Larrys Drake staring at each other on opposite sides of a revolving door.

But among the comic-book stylings of its presentation, Darkman is also a tragic tale of a man becoming a monster, befitting Raimi’s love of the Universal monsters to which the film pays homage. Sure, there’s blood and guts and a still-impressive helicopter stunt along a freeway, but among the cheap thrills is a remarkable tragedy of a good man losing his soul.

When we first meet Peyton Westlake, he’s a happy-go-lucky man content in his work, love life, and some delectable chunky sweaters. Ninety minutes later, he’s dropping bad guys off construction sites to their deaths. (“I’m learning to live with a lot of things,” he says) Any semblance of his humanity is little more than a mask he can’t wear for more than 99 minutes, inevitably dissolving to reveal the monster underneath. 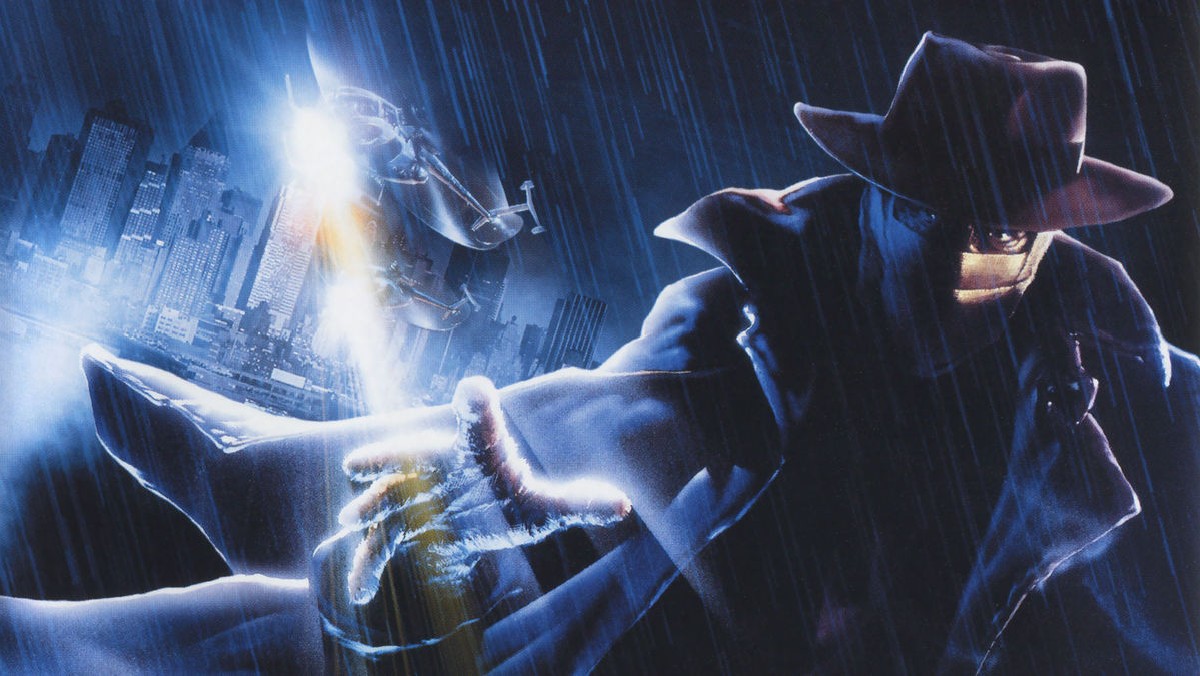 Like its titular figure, Darkman had to claw and scratch its way to life. The script was cobbled together from dozens of drafts from at least five screenwriters (including Raimi and his doctor brother Ivan, who helped with the medical science), and post-production was plagued with studio interference and poor test screenings. The cut we know was assembled 48 hours before the film’s premiere, a secret even to Universal executives at the time. Of course, the doubts were assuaged with glowing reviews and a modest box office success ($48 million on a $16 million budget). It even spawned two direct-to-video sequels with The Mummy’s Arnold Vosloo taking over for Neeson.

But that messy road to life merely adds to Darkman’s charm. An original superhero inspired by many but explicitly based on none, he feels both old-fashioned and ahead of its time. He’s an ode to the Universal monsters and ‘30s comic strips of yore, and a precursor to the more effortless blend of camp Raimi would bring to the Tobey Maguire Spider-Man films. Peek in the canted corners of the web-head’s version of New York City, and you’ll see Darkman’s DNA plastered throughout. If you love those films but haven’t seen Darkman yet, you’re missing out on one of the darkest, pulpiest, most visually inventive superhero movies of all time.