Chances are you’re familiar with Danny Elfman from his decades of composing films, most famously for director Tim Burton. You may also possibly know him from his years as the frontman for the eccentric rock group Oingo Boingo. In either case, you’d probably guess that the man is an aficionado of the bizarre. If you imagined him living in a spectacular mansion filled with odd vintage collectibles and spectacular ballrooms, turns out you’re right.

Thanks to Architectural Digest you can take a virtual tour of the spectacular Elfman estate, located in the Hancock Park area of Los Angeles. You can watch the full video below:

Built in the 1920s at the beginning of Hollywood’s Golden Age, the six-bedroom, eight-bathroom home was meticulously restored by Elfman and his wife Bridget Fonda, to the tune of $3 million. The kind of stuff one expects to see in an actual Burton film adorns every inch of the house. So yes, lot of creepy dolls from the 1920s. And also lots of taxidermy, and even a spider monkey skeleton hanging around the living room. We think the Addams Family would be mad jealous. There’s also a grand ballroom/screening room that the waltzing ghosts from the Haunted Mansion would feel right at home in. 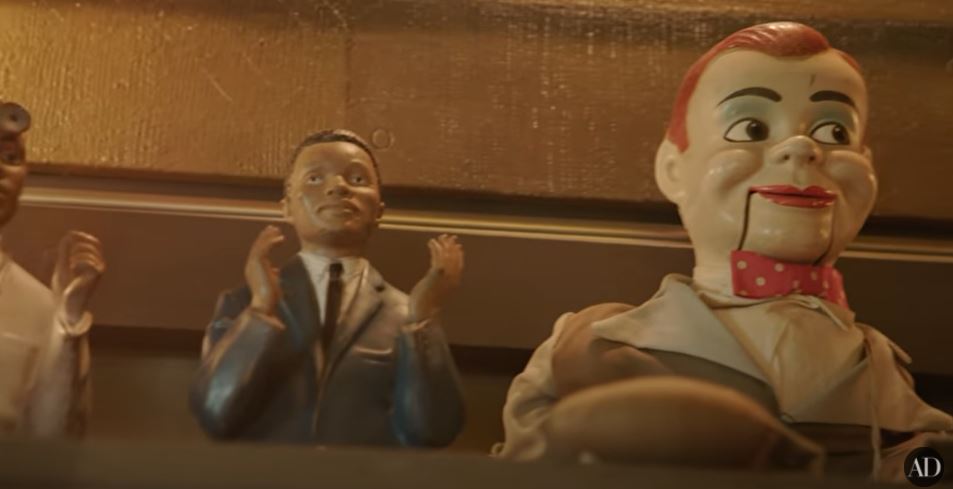 In addition to the main house, Elfman and Fonda also bought an adjoining property, which they also restored. This one was more Fonda’s pet project, and is a mid-century style house. Once this house got an upgrade to their particular style, it kind of looked a bit like a crossover between the Brady Bunch house and The Munsters’ home. A classic TV mash-up you never knew you wanted!

Elfman and Fonda have put this spectacular mansion on the market, for the price of $14 million.  Likely not included is the spider monkey skeleton. But it’s still a fabulous home any wealthy Goth should immediately pounce on.