So says the eponymous Daniel in Adam Egypt Mortimer’s Daniel Isn’t Real, an imaginary friend horror story drenched in neon poison that premiered at the SXSW Film Festival in Austin this week. It’s a film made for the Midnighter section of the fest, a rowdy genre picture bursting at the seams with ideas, manic energy, loud performances, and dazzling aesthetics. It has about 500 things to say and it only says a few of them super well, but it’s hard to really care with a movie this ripe with style and allure. Mortimer is having a wild time, and it shows in every splashy, punk-colored frame.

The film follows Luke (Miles Robbins, who looks so much like Jughead Jones that the movie starts to feel like a demented episode of Riverdale), a quiet, arty college kid whose life is marked by tragedy and trauma. As a child, he stumbled on the aftermath of a mass shooting, and was soon afterward visited by an imaginary friend named Daniel who helped him cope with the haunting images he couldn’t escape. Daniel began as a friend and confidant, but quickly turned malicious. With the help of his mentally ill mother Claire (Mary Stuart Masterson), Luke locked Daniel away in an ornate dollhouse, and grew up without his menacing control.

But in his early 20s, he unleashes Daniel, now a grown man like him (and played by a terrifying Patrick Schwarzenegger), and the two once again strike up a friendship laced with danger and destruction. Daniel both gives Luke the confidence to charm women, like fellow artist Cassie (Sasha Lane), and also fills him with bursts of anger and violence. Eventually, Daniel learns how to manipulate Luke’s physical body, and the two identities begin a vicious clash where only one can survive. 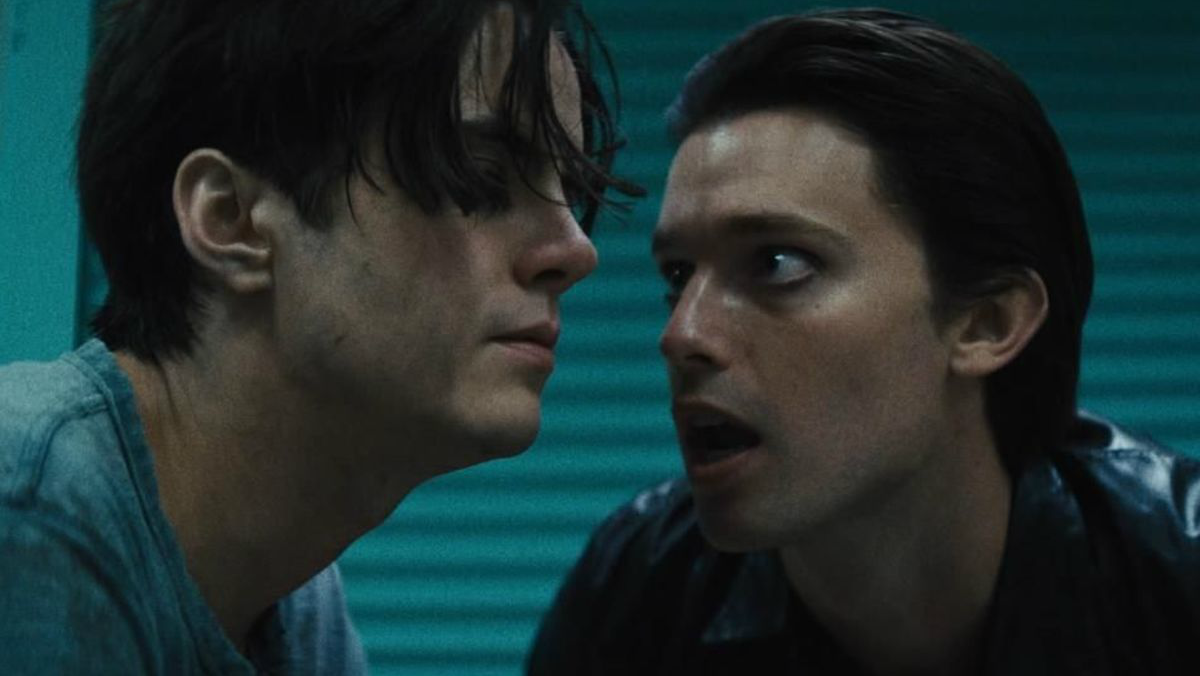 Mortimer co-wrote the script with Brian DeLeeuw, who wrote the book the film is based on, In This Way I Was Saved. Together, the two have crafted a story that succeeds despite its obviousness, a coming-of-age fable about schizophrenia and the pull of mental illness. The latter can be a tricky thing to visualize, but Mortimer navigates it well, finding a unique physical language that mimics the mind of a person steeped in mania. Luke’s head is full of hallways drenched in neon-purple light and haunted by monsters like look like something out of Hellraiser. The aesthetic immediately recalls 2018’s Mandy, but it works in its own strange and intoxicating way.

A few of the performances in Daniel Isn’t Real don’t quite crack it—Schwarzenegger is occasionally stiff and Lane never quite comes to life—but Robbins more than makes up for them. He’s got a frantic charisma that’s hard to look away from, a quality that feels flexible; he can play the softer sides of Luke believably well, then flex right into Daniel-influenced Luke, who wears jewel-toned suits and slicks his hair, handsome and dangerous and out of control.

I’m not sure the film is wholly responsible with its depiction of mental illness—psychiatric meds don’t work on Luke and there’s a feeling that maybe he’s a more interesting person when Daniel shines through—but it’s never entirely dishonest. Films about mental illness don’t need to be wrapped in a bow or hand-holdy; sometimes warts-and-all is the right call. It certainly is here, in the light-flickering halls of Luke’s disordered mind, a visualization I’ve never quite seen before and won’t soon forget.