In the ongoing effort to find out where, when, and even if Einstein’s general theory of relativity (GR) stops applying to the physical world, scientists have encountered yet another milestone: They’ve found that a star “dancing” around the supermassive black hole at the center of our galaxy does indeed obey the laws laid out by Einstein’s theory of gravity. Meaning that even very close to supermassive black holes, which hugely warp the fabric of spacetime, GR is still the law of the land. For now.

Science News reported on the finding, which was described by its discoverers in a recent paper published in the journal, Astronomy & Astrophysics. According to the paper, authored by members of the European Southern Observatory’s GRAVITY collaboration, a star, dubbed S2, which orbits the supermassive black hole at the center of our galaxy, Sagittarius A*, traces out a particular orbital pattern that is “fully consistent with GR.” 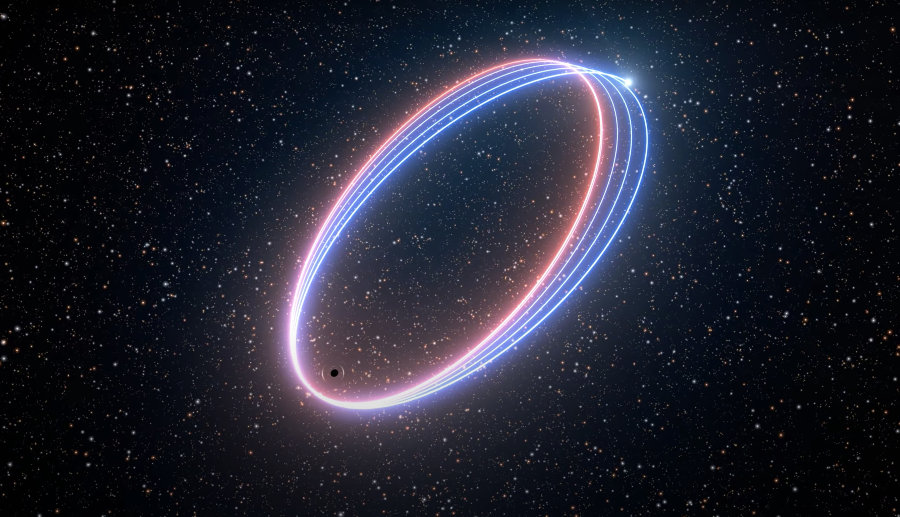 An artist’s illustration of S2’s orbit around Sagittarius A*. ESO

This isn’t the first time GR has predicted this particular orbital pattern, which is described as flower-like, or “rosette shaped.” In fact, Einstein’s theory of gravity explained the same pattern more than a century ago in regards to Mercury’s orbit around the Sun. It’s also well known that this pattern is the result of the “Schwarzschild precession,” which is the precession—or change in the orientation of the rotational axis of a rotating body— that can result from the curvature of spacetime. (In the picture above, each line S2 draws out around Sagittarius A* designates a change in the former’s rotational axis.)

A dancing star and Einstein’s theory of general relativity — learn more about this amazing discovery in this short video.#ESOCastLight #BiteSizedAstronomy #4K #UHDhttps://t.co/hRKpTtHgVP pic.twitter.com/OCVMQrUnJC

It took the scientists involved with this discovery 30 years to complete the project, which is roughly equivalent to two orbital periods for S2 around Sagittarius A*—it takes about 16 Earth years for the former to fully orbit around the latter. And while it’s unclear when the next real test of GR will occur, hopefully it won’t take another three decades. Especially if that new test shows that GR does not hold up in all places in the universe, and therefore requires the addition of a new theoretical framework for explaining the laws of physics in their totality.

Galaxies: In the centre of the Milky Way, as in other large galaxies, lies a supermassive black hole. It's called Sagittarius A*, and its presence is inferred by watching stars closely orbiting it. In 2018 star S2 was recorded moving at ~7650 km/s or 2.6% of c. #RandomSpaceFacts pic.twitter.com/w3LJcIMCHT

What do you think about S2’s wild orbit around the supermassive blackhole at the center of our galaxy? And when do you think Einstein’s theory of gravity will start to fail at explaining the physical universe, if ever? Let us know your thoughts in the comments!