Cthulhu Company Kickstarted Itself to Death, Then This Happened - Nerdist

Cthulhu Company Kickstarted Itself to Death, Then This Happened

How does a half-million dollar Kickstarter fail? And why would another company step in and spend six figures to raise it from the dead?

Chaosium, Inc. is one of the grand old ladies of the role-playing game industry. The company was founded in 1975 by gaming mastermind Greg Stafford, creator of the world of Glorantha and the Pendragon RPG. The company went on publish the seminal horror RPG, Call of Cthulhu which is based on the works of HP Lovecraft. The company, while never a giant in size, punched above its weight and had a devoted fan base.

So when Chaosium began a Call of Cthulhu 7th edition Kickstarter in 2013, it did very well, bringing in over $500,000 from thousands of backers. The campaign smashed through stretch goals, which mandated the creation of a further four books. Fans of the game and other non-Euclidean horrors all gibbered in ecstasy, both with the sense that they had contributed in making a beautiful game by backing the Kickstarter, and in anticipation of the sanity-shattering volumes that would soon be in their claws. This was the company’s second six-figure Kickstarter; the previous Horror on the Orient Express campaign having raised $207,804.

The expected delivery was October 2013, a deadline which came and went. A new deadline was announced, which was similarly blown through. PDFs of the core books were released in 2014, and many promises were made about printing and shipping.

In March of 2015, nearly two years after the end of the campaign, backers were told, “Following on from our previous update, the printer has the final files and has begun the printing process. We look forward to receiving printer’s proofs in due course.” This too would prove to be a lie. Files had been sent to the printer, but unfortunately, not funds needed to pay for printing.

On June 2nd, 2015, Chaosium announced that founder Greg Stafford had returned to the company as president. Fellow genius Sandy Petersen, the original designer of the Call of Cthulhu role-playing game, returned with him, and the pair made the fulfillment of the company’s Kickstarter orders its number one priority. When Stafford and Petersen returned, Chaosium had less than $10,000 in the bank.

How does a company that had raised over $750,000 on Kickstarter in two years come to have less ten grand in the bank?

In an extensive email interview with Chaosium’s new management, the company’s current president, Rick Meints laid out a tale of mismanagement, poor business strategies, and nigh unethical practices by the company’s prior management.

The problems began with the Horror on the Orient Express Kickstarter. The previous management only charged international backers $20 to ship a ten pound game. The actual cost of shipping was vastly higher, sometimes as much as $150 for backers in Japan. Meints said that this Kickstarter alone likely lost Chaosium $170,000. When Greg Stafford took over the company, there were still a number of backers who had yet to receive their products.

The Call of Cthulhu Kickstarter compounded these problems. The Kickstarter committed Chaosium to producing eight books, as well as four card decks, and a CD. Then, these products needed to be shipped to backers all over the world. Horror on the Orient Express returned to haunt the company. It was offered as an add-on to Cthulhu backers, who could purchase a copy for a mere $65 (the product is $119.95 on Chaosium’s website) and the company only charged a dollar for shipping. A half-million-dollar Kickstarter seems small when weighed against that stack of product and shipping costs, and it proved as much.

The magnitude of the error can be seen in a simple glance at the shipping. At the “Nictitating Nyarlathotep” level of pledge, backers would end up having eight books shipped to them. International backers had to pay a total of $355 for all their rewards plus shipping, which sounds like a lot, until you consider that’s only $15 more than customers in the continental US were paying. The idea that shipping eight books to Japan would cost a mere $15 more is a madness not even Lovecraft could have conceived.

Meints said that tens of thousands of dollars went to layout, art, writing, and editing the volumes. Furthermore, Chaosium was located in Hayward, California, a suburb of San Francisco. The cost of running a warehouse and office there was also taken out of the Kickstarter funds.

Chaosium fell behind in paying artists, editors, and authors. The new management discovered as many as a hundred were owed payment by Chaosium, and some had been waiting for over a decade for their money.

When Stafford returned to the company in June of 2015, he found the company was cash poor, with extensive outstanding obligations, and appeared to have no way to meet them. Stafford had birthed Chaosium. Would he also bury it?

The Stars Come Right for Chaosium

In August, Stafford announced the award-winning team of Moon Design Publications would take over management of Chaosium. The Moon Design team handled the crisis in a bold and time-honored way: they threw money at it.

The Moon Design team spent six figures out of their own personal pockets to have Call of Cthulhu 7th edition printed and shipped. Meints estimates that by the time all the backer rewards are shipped, they will have spent more than $100,000 on shipping alone.

At long last, the printer was paid, and the books were printed. 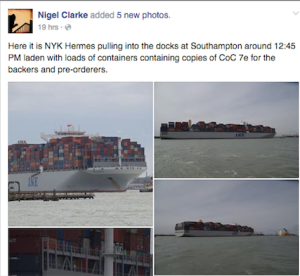 Eager fans using the hashtag #ShipsofCthulhu tracked the ships bearing the long-awaited volumes into port, taking pictures and posting them on social media.

Vice-President Michael O’Brien said, “The response from Chaosium fans has been overwhelmingly positive – even the Call of Cthulhu fans who’ve had to be very patient.”

Moon Design brought on editor James Lowder. Lowder, who is known for what Meints described as, “His strong and long-standing advocacy for creators,” became the consulting editor for fiction and immediately began to settle outstanding debts with writers and artists.

Lowder said of the situation, “Where other publishers in similar rough straits have walked away from their obligations, Greg, Sandy, and the new Chaosium management team have consistently done the right thing by their writers and editors, and the backers for the long overdue Kickstarter, a group I also belong to. They brought me on as a consultant to help them identify debt and pay the fiction creators what they are owed. That’s just what we’ve done. I’m proud to be part of those efforts.”

Matthew Sanderson, a Cthulhu writer who worked with both old management and Moon Design, said that the new team is much more communicative. He added, “They’ve been great (in person and in writing) whenever I’ve had any dealings with them.”

Chaosium seems to have risen again from the dust, like a Lovecraftian wizard summoned forth from his essential salts. A Kickstarter for the classic RuneQuest game funded in January, and backer rewards were printed and ready to ship in three months, which certainly raises confidence in the Moon Design management team.

However, a question lingers. Why would Moon Design Productions invest such considerable time and even more considerable amounts of money, in reviving another company’s dead Kickstarter?

President Rick Meints explained their actions, saying, “[We] decided to help save Chaosium for a number of reasons. All four of us grew up with the company and have loved their games for decades. We also approach this as a long-term investment that can succeed with a great deal of hard work. The world of tabletop gaming is far richer with Chaosium in it, and we are proud to help ensure it continues doing so.”

CFO Neil Robinson explains that the success of Chaosium is personal for Moon Design. He said, “The four of us would have never met without RuneQuest, the first Chaosium RPG… [When] we met, we were living in four different countries across three continents.”

And so Chaosium, while under new management, stays in the family.

Special thanks to the Chaosium/Moon Design team. Without their forthrightness, this article would not have been possible.

Wanna get in on Call of Cthulhu 7th? You can preorder it here.