According to a newly released study, algae blooms are expected to spread further across Antarctica as the continent undergoes climate change-induced warming. These algae blooms could become so pervasive, they may even turn some of the continent’s coastline green. Although it’s unclear just how green Antarctica could become or what the timeframe would be for its color change.

The study, which comes via Bored Panda, was recently published in the journal Nature Communications. The aim of the study was not to find out how green Antarctica is likely to become. It was to estimate the amount of “green snow” algae blooms currently distributed along the Antarctic Peninsula. Lead author of the study Dr. Matthew Davey notes in the brief explainer above that this is the first-ever large-scale study of the abundance of the algae blooms.

Davey, who works in the University of Cambridge’s Department of Plant Sciences, pointed out in a University of Cambridge press release that “This is a significant advance in our understanding of land-based life on Antarctica, and how it might change in the coming years as the climate warms.” He added that “Snow algae are a key component of [Antarctica’s] ability to capture carbon dioxide from the atmosphere through photosynthesis.” 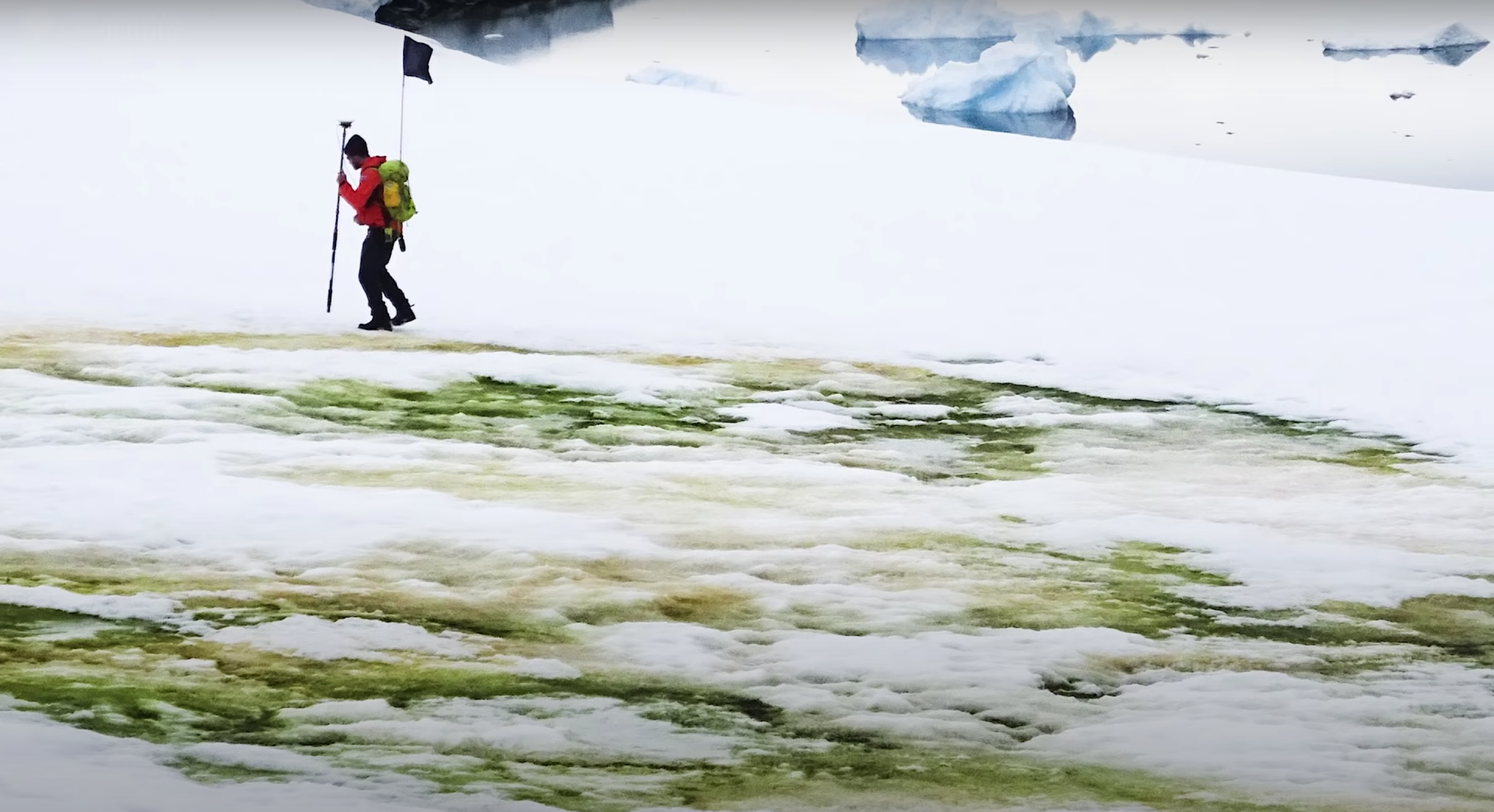 The algae blooms consist of simple, non-flowering plants—technically they’re microscopic photosynthetic eukaryotic organisms—that grow in the “warmer” parts of Antarctica. (“Warmer” defined in this instance as having an average temperature of just above zero degrees Celsius during the Southern Hemisphere’s summer months.) They’re integral to Antarctica’s climate because they trap carbon dioxide. In fact, the researchers say that the algae blooms currently sequester roughly 479 tons of carbon dioxide per year, which equates to the amount of carbon dioxide emitted from 875,000 average gasoline-powered car trips in the UK.

Davey et al. found that the distribution of the green snow algae blooms strongly correlated to where marine birds and mammals were found. This is because the animals’ feces are an extremely nutritious fertilizer that accelerates the growth of the algae blooms. For instance, over 60% of the blooms were found within 3.1 miles of a penguin colony. And there’s no doubt that penguins produce a lot of poop—which can, incidentally, get you high.

Moving forward, it seems Davey and the other scientists involved with the study want to keep an eye on the algae blooms’ growth rate as the global climate warms. They also want to study how much carbon dioxide is captured by red algae blooms and orange algae blooms. Those are also prevalent on the icy continent.

“Studies like [this one] are extremely important because they increase our understanding of the complex connections between… species,” Davey says in the explainer video. He adds that the more we understand these connections, “the more we can protect our planet and its fragile ecosystems that could be lost or changed forever.”

What do you think about these algae blooms popping up along the Antarctic Peninsula? Do you think we’ll see a large swath of the icy continent turn green in our lifetimes? Let us know your thoughts in the comments!