Chronicles of Crime from publisher Lucky Duck Games is the epitome of innovation through iteration. This is a game of sleuthing that closely parallels the most influential Sherlock Holmes: Consulting Detective. It’s a narrative design of solving a central crime by visiting locations and interrogating peculiar individuals. As stated, we’ve seen this framework before–so what’s the fuss?

Well, the ado is all about that $500 piece of hardware warming your pocket. Chronicles of Crime is an app-driven game, its cardboard muscle running off the electric guts in that mobile. Much like Sherlock, it presents a mystery requiring a solution and you need to tease out the solution through mounds of text.

That text takes the form of chatting with witnesses and bystanders. You’ll head to locations and talk to colorful muggles by scanning QR codes on the cardboard components. Want to question that sassy woman with a devilish grin that says, “I murdered the old hobo”? Sure, just scan the Hyde Park location and then sassy woman’s card and you’ll have your answers.

There’s a pretty wide latitude in the implementation. You can ask people about specific pieces of evidence you’ve collected, again by scanning the person you wish to ask and then the evidence card. You can also approach several specialists working with the London police department to get their take. That blood you found innocently splashed across the carpet? The forensic scientist will have something to say. 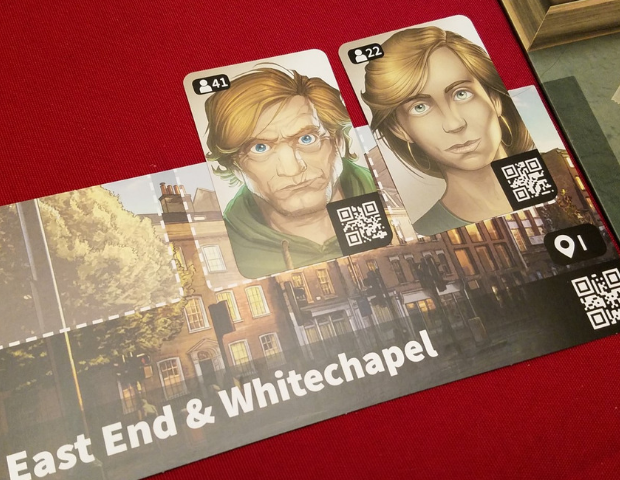 The goal here is to reconcile the evidence and witness testimony to form a narrative. After an hour or so of hardboiled detective work you head back to the station and wrap things up with a questionnaire; this is the government, after all. They like their paperwork.

All of this questioning and subsequent dissecting of text can be a bit taxing. You’ll find yourself constantly scanning components and scrolling through dialogue. This also places a burden on a single member of the group to handle the heavy lifting and act as the game’s facilitator. Often, you’ll pass the phone around and share duties, but it’s a slight shame you can’t all follow along on your individual devices to remain in the thick of it.

In this regard, the single phone running the show is identical to the case booklet in Sherlock. The advantage here is that the phone can respond to your actions. Events will fire off occasionally and your train will get derailed. Maybe that man you were talking to at the last pub was offed while you were making your next stop at an apartment complex. This uncertainty and ability for the script to seize you by the scalp injects a lively spirit into the experience that enhances the atmosphere greatly.

This innovative system is anchored by an excellent dogleg courtesy of virtual reality. When you hit upon a crime scene you can enter a VR mode and look around your surroundings. You will need to call out to the rest of the group every little detail you spot, careful not to miss a single element. Meanwhile, the rest of the crew is combing through this large stack of evidence cards and pulling out anything that may match.

You lift the phone up and start looking around a confined flat. A woman sits dead in the corner, blood on her scalp and a stained baseball bat lying nearby.

You’re quickly shouting this all out to the group. Your time is limited and you need to physically turn and angle your head every which way to investigate each nook and cranny something may be hiding.

As you’re narrating your surroundings everyone else is thumbing through a section of those cards. Someone happens upon “Blunt Object” and tosses it out onto the table. Another finds “Blood and DNA” and slaps that down.

When your time runs out you scan each of the cards you’ve isolated. The app then tells you which apply and which do not. Each card you scan eats up some of your in-game time, reducing your final score so it’s not all peaches and cream.

This is a really enjoyable process of picking up breadcrumbs and seizing progress. It helps shake up the normal proceedings of reading gobs of verse. 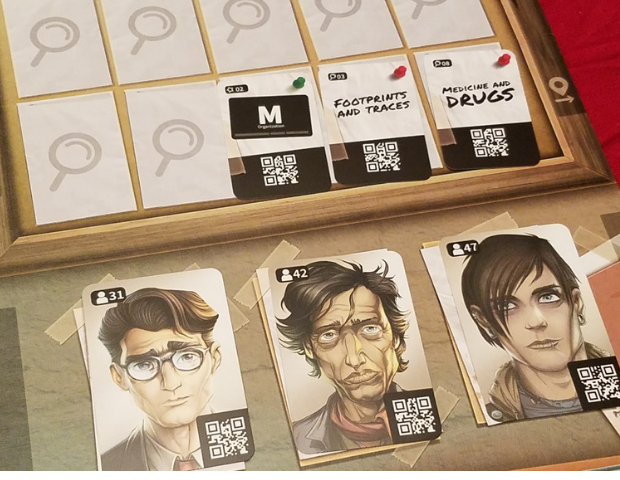 There’s no doubt in my mind that Chronicles of Crime is an innovative twist on an established blueprint. Just as its tethered to its predecessors, it suffers some of the same limitations. While it makes ample use (and re-use) of its many generic cards detailing peoples, places, and things, it is inherently limited by its included content. Each scenario can only be played through once and the game only ships with about five sessions worth of material.

This actually is a reasonably curated volume sized against the price. The best moments of this style of game arise in the back and forth of discussion and theorizing with your fellows. That adds weight to the experience and helps to de-emphasize the cost when engagement is spread across multiple individuals.

The application, of course, includes reasonably priced content you can acquire. This method of electronic expansion and re-using the physical bits you purchased in the core box has great potential. Instead of throwing a larger wad at a robust deluxe set, you can take a smaller bite and pick up new cases as they’re needed. Publisher Lucky Duck Games appears committed to this model and it looks as if we will have a long line of options for many years.

Chronicles of Crime accomplishes a delicate balance between electronic and analog. It justifies its existence beyond merely an app by facilitating a rich cooperative experience. There are limitations inherent in the structure, but the game delivers on its promise and stands tall alongside its peers.

Are you excited for Chronicles of Crime? Let us know in the comments!