We’ve finally gotten a trailer for the  Chilling Adventures of Sabrina series that’s heading to  Netflix next month, and it is honestly incredible! It also proves that the show is definitely shying away from its lighthearted roots—there’s a whole lot of satanic imagery and secret messages, so we thought we’d list out everything we noticed from the first teaser of the (sort of) Riverdale spin-off!

It’s a darkly atmospheric minute or so, and one that is intercut with flashing images of all kinds of satanic shenanigans starting with a blood moon. This is heavily story-relevant, as the main comic book narrative of Chilling Adventures of Sabrina is that our teen-witch protagonist has to decide whether to truly commit herself to the dark arts during a ritual on her sixteenth birthday, which of course happens to fall on the blood moon!

The next startling image we catch is a rotten apple filled with maggots. In classic art symbolism, the apple signifies not only the potential innocence of a woman, but also her body and sexuality. Of course, when shown rotten, such implies corruption or tarnishing of that very innocence and body. With Sabrina about to sell her soul to Satan, that seems pretty appropriate. 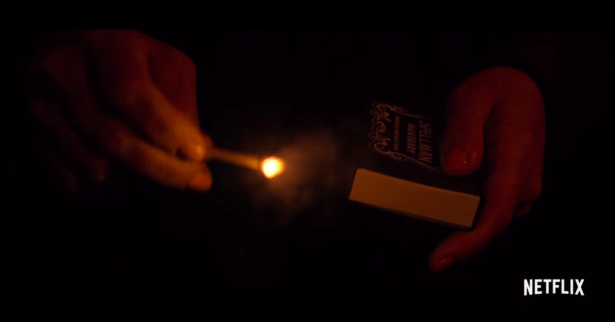 We also get our first visual confirmation that Sabrina’s aunts will be still be running the family business. In the comics that the show is based on, the pair run a mortuary; we see some Spellman Mortuary matches in the trailer’s opening. There’s also a little clip of a spell book filled with drawings, including a blood red pentagram, the internationally recognized ancient five-pointed star often linked to witches, which was repurposed when inverted by contemporary Satanists. So far, so Sabrina.

Another split-second shot showcases Sabrina heading into the woods, probably for her sixteenth birthday party/dark baptism. She’s got a couple more satanic symbols hanging around her head, including an inverted cross. The chilling trailer also sets up a little about the town, focusing on a Greendale license plate, introducing us to the local high school and teasing the arrival of Cerberus Books, which will allegedly be a local business run by of one of the show’s main characters.

The teaser is partially soundtracked to a spooky version of a Marilyn Monroe-style “Happy Birthday,” and we also see Sabrina running around the woods and what looks like a Halloween party in a white dress reminiscent of Monroe’s iconic outfit in The Seven Year Itch.

One of the main stars of the trailer is this charming devil. In the comic, Satan himself is a huge part of the plot, as he appears at Sabrina’s baptism in this form, and was also around during the era of the witch trials which the book explores. It makes sense we’d see him, as we guess that most of the first season will be focused on Sabrina struggling with the duality of her life as a half-mortal half-witch leading up to the choice whether she should dedicate her life to Satan and the dark arts like the rest of her family. Classically, the goat-headed demon has appeared throughout history and is widely known as Baphomet. The creature first appeared during the trials of the Knights Templar, who were accused of worshipping him, and has since become a focus of Devil worship and other mystical belief systems after being made popular by Alister Crowley.

Another moment showcases Sabrina and some classmates learning about demonology. so we can assume that there will be another institution that exists alongside Greendale High and represents the other half of Sabrina’s life. We also see some young folks practicing what definitely looks like some kind of pagan ritual around a very big pentagram.

It seems like Sabrina’s world might be one where witchcraft is recognized widely, or at least suspected, because at one point we see some angry faces screaming, “Witch!” As we move towards the end of the teaser, it appears things aren’t going to be easy for Sabrina as we see her in a ceremonial magic circle being either controlled or saved by a young man.

There’s a couple of other little hints at the satanic goings on, with a pen that looks to be carved out of bone, another glimpse of our demonic goat, and a nice nod to chillers like The Shining with a creepy moment of Sabrina in the bath. But of course, the moment that has fans most excited is our first glimpse at Salem the cat as the title appears!

Will you be watching Chilling Adventures of Sabrina? Was there something we missed? Let us know below!