The CHAMPIONESS Graphic Novel Motion Trailer Is a Knockout - Nerdist

The CHAMPIONESS Graphic Novel Motion Trailer Is a Knockout

Elizabeth Wilkinson was a female bare-knuckle boxer in 18th century London. She’s considered to be the first female boxer, actually. Her life is a bit of a mystery, but her story inspires the upcoming graphic novel Championess from Legendary Comics. Writers Tarun Shanker and Kelly Zekas and artist Amanda Perez Puentes have reimagined Elizabeth as half-Indian. They’ve built a narrative around her passion and talents for fighting and the people in her life. And today, Nerdist has the pleasure to exclusively reveal a new motion trailer for Championess. It thrusts the intensity and rawness of boxing in your face.

It really puts you right by the side of the ring cheering Elizabeth on and emphasizes Puentes’ powerful art. Puentes tells Nerdist she referenced boxing and wrestling media to get the fight stances and movements just right. “Kelly and Tarun were a huge help in providing materials for some of the more complex moves to match the descriptions in their writing, so it was a joint effort in that regard. The clothing was slightly more difficult to find accurate references for as most visuals of the time depict aristocracy, but a book called The Dress of the People by John Styles gave me good insight into how common people dressed, as well as the kinds of materials and fabrics they used. All of that helped me visualize the way in which their skirts would flow and swish in a fight,” she details.

One reason Elizabeth is boxing is to helping her sister. The full synopsis:

Championess is based on the true story of Elizabeth Wilkinson, a female bare-knuckle boxer in 18th century London. Elizabeth, reimagined as half-Indian, and her sister Tess struggle to make ends meet and cover Tess’s debts. While Elizabeth works odd jobs at the local newspaper, the only way she knows how to make enough money to help them survive is her true passion, bareknuckle boxing. With Tess’s support, Elizabeth trains at the boxing facility of one of the most famous retired boxers and the only real fight promoter of any notoriety, James Figg. As Elizabeth trains with Figg and James Stokes, she confronts her personal demons of what destroyed her family and comes to terms with being the first half-Indian female boxer in a white male world. 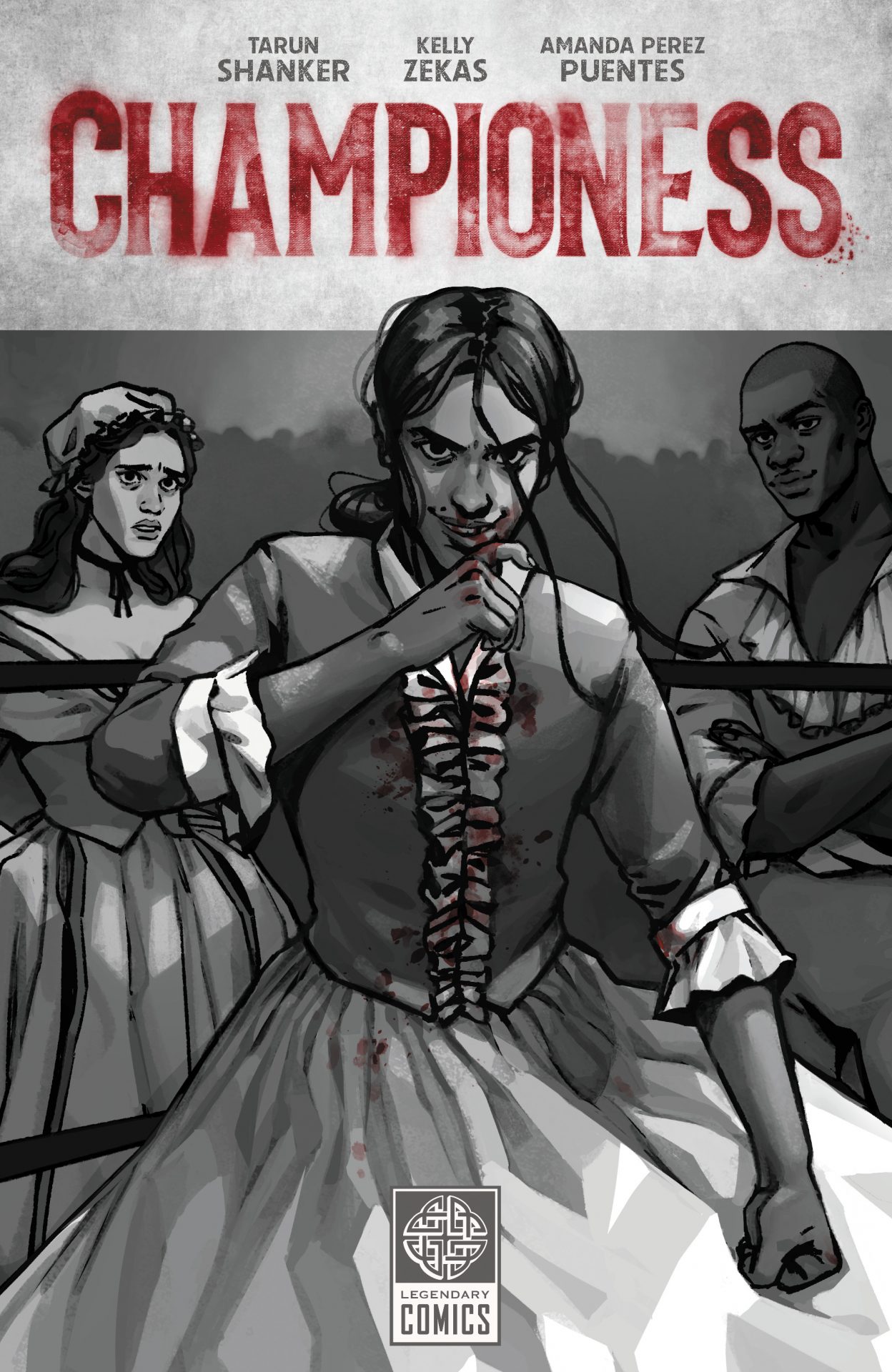 Shanker and Zekas tell Nerdist that knowing so little about Elizabeth Wilkinson’s life felt like a blessing and a curse. “What we did know is that Elizabeth wouldn’t have been rich, she would have been working class and possibly barely scraping by. So that meant our research on Georgian-era London needed to focus on those often ignored by history,” they explain. “We wanted to know where she would eat, how she might have made money besides boxing, what neighborhoods she would have lived in. We looked at academic papers on her and her place in the history of boxing. We read late-Georgian and Victorian reporting about other famous boxers, their training, and lifestyles. We read about the ridiculous gambling that occurred in the upper classes.”

The writers also looked at England in that era from a global context and the experiences of immigrants in the country. They also made Elizabeth half-Indian and that meant exploring what it was like for the non-white community in England. “Historically, boxing has been a means for people from poorer, marginalized groups with limited opportunities to make it out of poverty, so when we read 18th century history about early Indian immigrants—sailors who got stranded in English port cities and struggled to get hired for work—it made sense,” Shanker and Zekas say. “Beyond the financial reasons, we also read about how boxing was linked with nationalism and manliness, and became a symbol of England’s military strength around this time, so we thought this would be an interesting lens for exploring the life of someone English-born, but viewed as an outsider by most of the white people around them.” 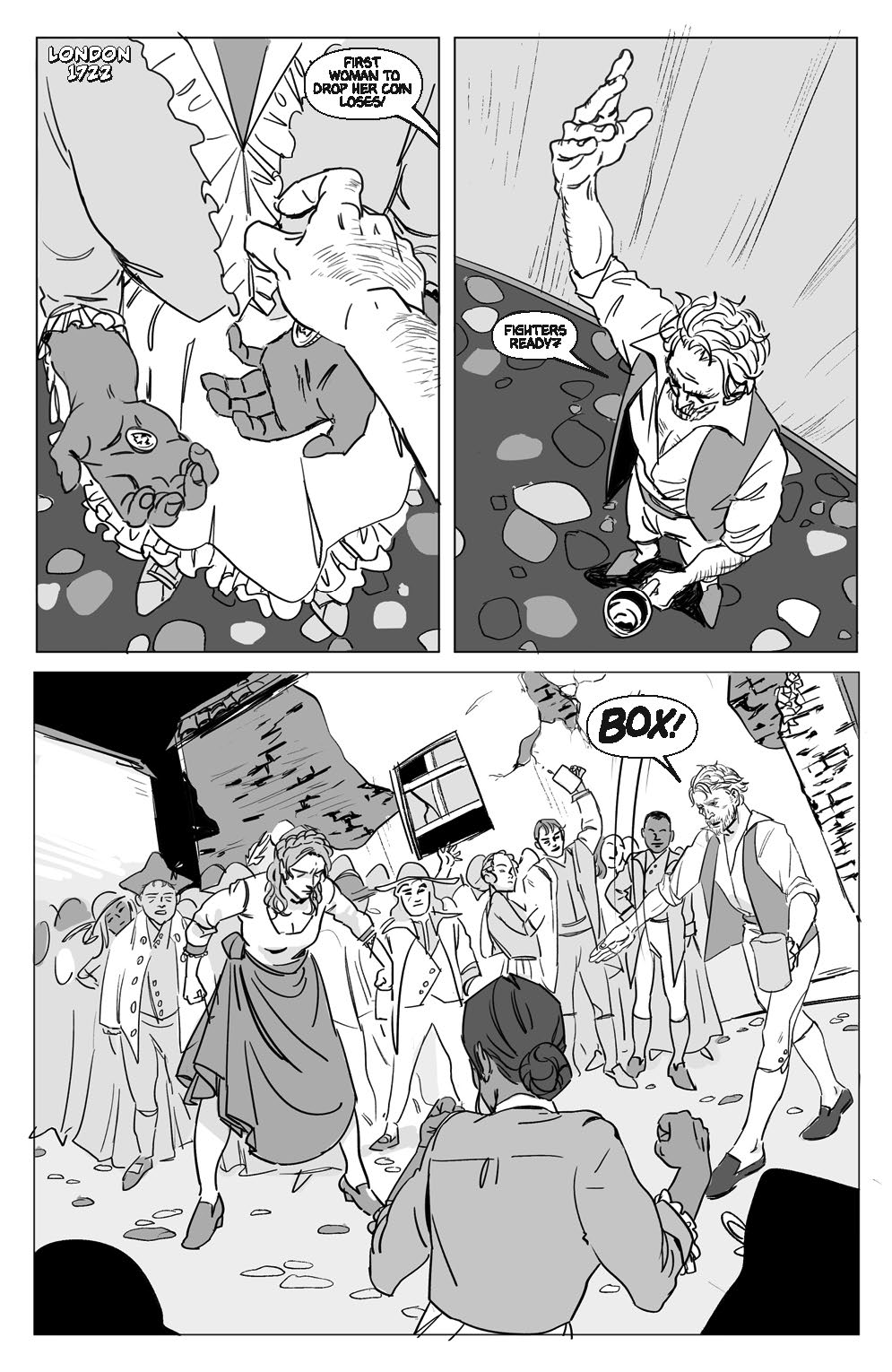 With that outsider status and also being a woman, Elizabeth’s pretty much immediately the underdog in any fight. Still, research told Shanker and Zekas that Elizabeth was the most popular boxer of her time. They relate, “The much more repressive Victorian era that came later sort of buried her in history, highlighting other male boxers instead. But while she was very popular, her gender certainly was a bit of a novelty, which we emphasized in her struggle to find her spot amongst the top boxers of the day. We both love a good underdog boxing movie and everything just clicked together story-wise as we factored in the treatment male boxers and white boxers would get in and out of the ring, how that difference would affect Elizabeth’s identity, and what she would have had to do to be taken seriously so we all know her name 300 years later.”

And thanks to Championess, even more people will learn the name Elizabeth Wilkinson and dig into her history. Plus the original graphic novel is already set to become a TV series with the UK-based production company Watford & Essex.

Championess arrives on April 13. Snag a copy wherever you buy books. Get more details at this website.